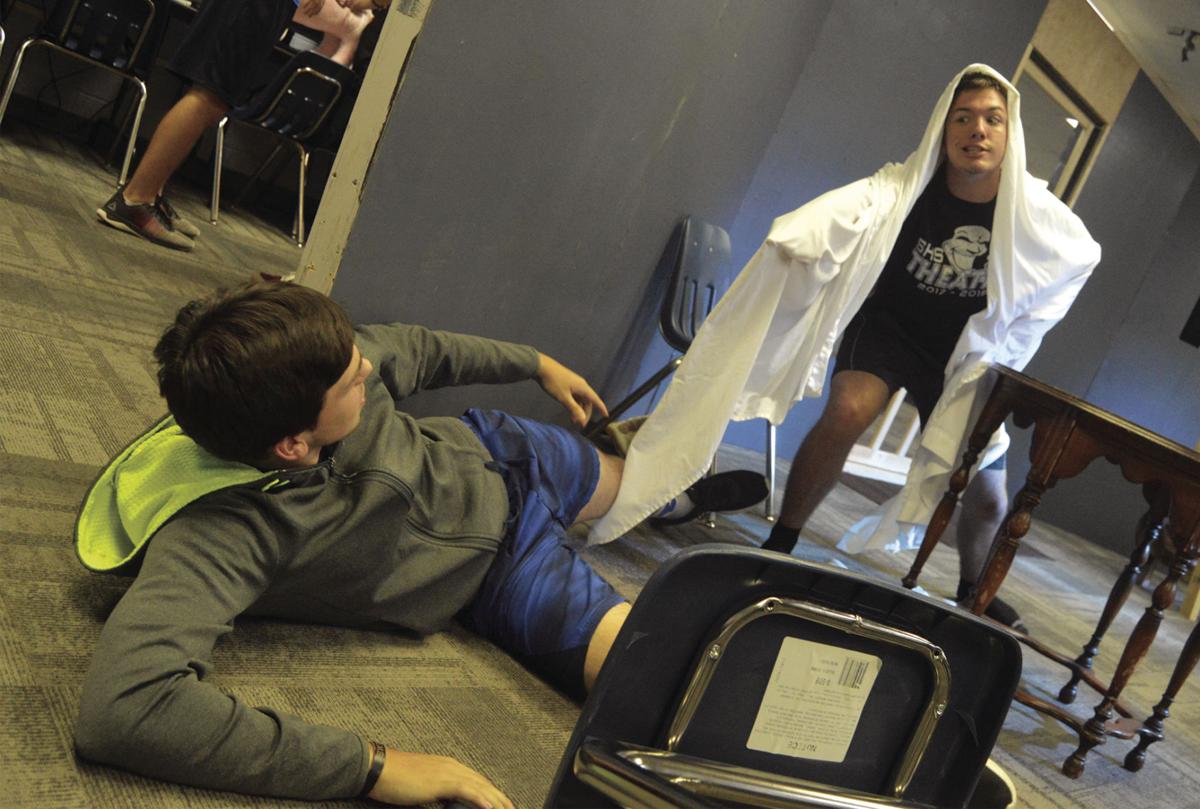 Hamilton Haverkamp, right, terrorizes Noah Bonura while pretending to be a ghost during a recent rehearsal for the Springfield High theatre department’s production of “A Hillbilly Christmas Carol.” 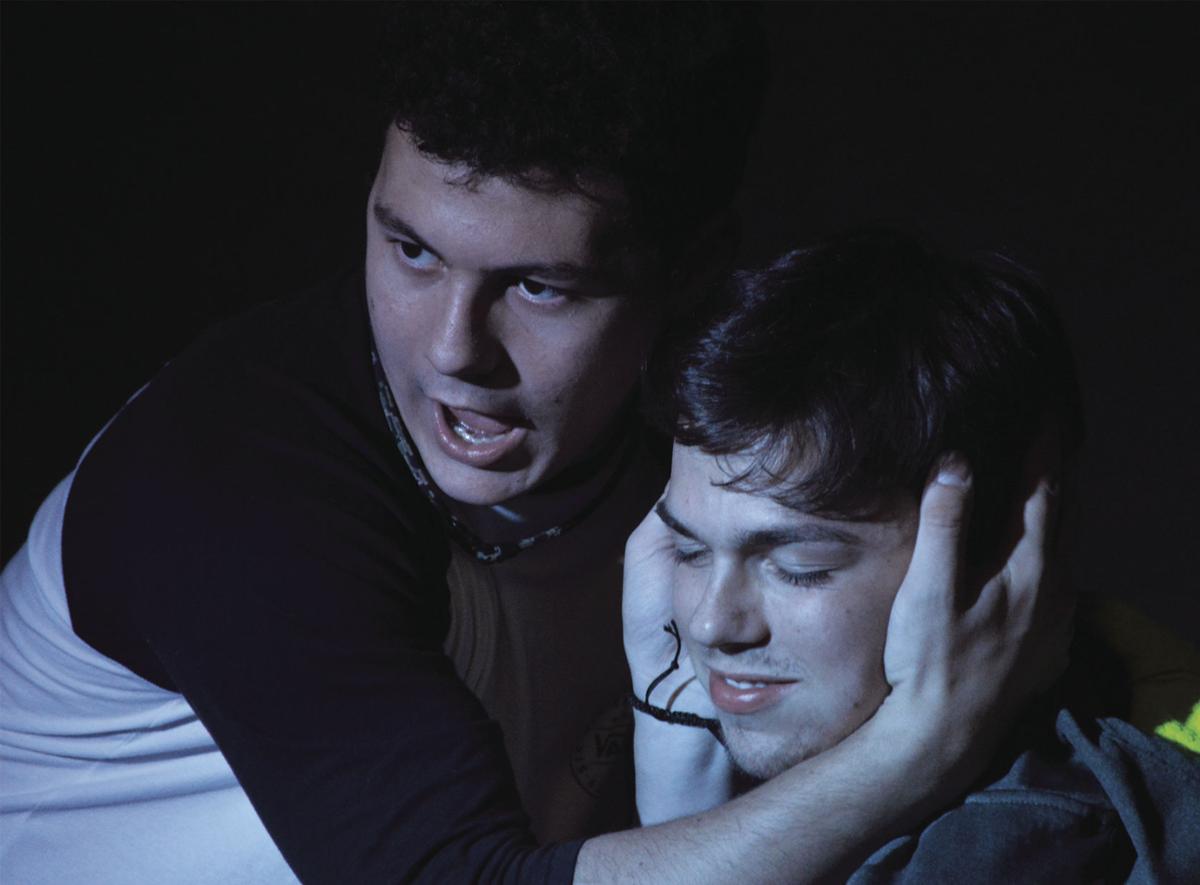 Lane Degenhardt, left, acts out a scene while holding the face of Noah Bonura during a recent rehearsal for the Springfield High theatre department’s production of “A Hillbilly Christmas Carol.” 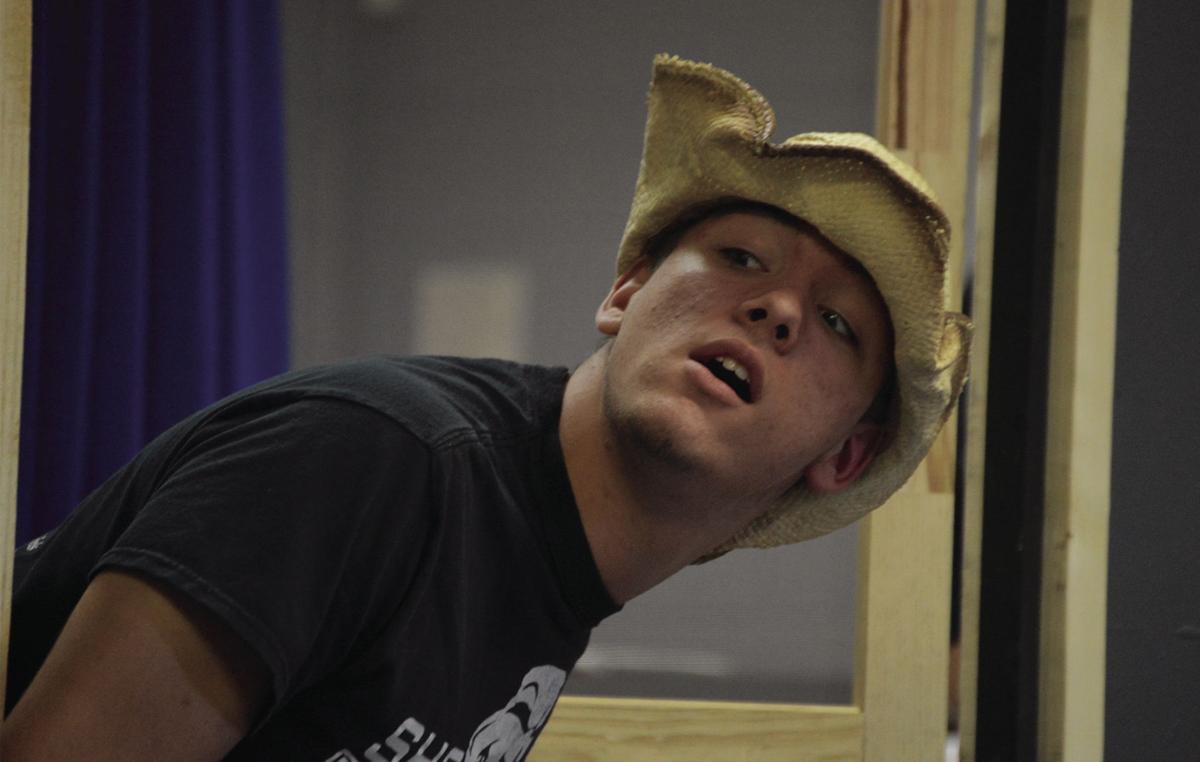 Hamilton Haverkamp, playing the role of Hiram Hinkly, looks in the distance during a recent rehearsal for the Springfield High theatre department’s production of “A Hillbilly Christmas Carol.”

SPRINGFIELD -- The name is Joshua Frunheiser.

But make no mistake, this is a story about Ebenezer Scrooge — with a backwoods, Louisiana twist.

That’s what the Springfield High School theatre department plans to bring audiences when it hits the road for traveling productions of “A Hillbilly Christmas Carol” later this month.

Under the direction of junior Mason Sibley, SHS theatre students will load up their costumes, props and backdrops in a trailer and take their fall production to at least 15 schools from Nov. 30 - Dec. 20.

The play features a cast of eight, led by Noah Bonura in the role of Joshua Frunheiser — the grouchy, Christmas-hating Southern redneck whom characters refer to as “an old mule skinner,” “a mean polecat” and a slew of other country-bumpkin insults.

“Humbug,” snarled Bonura in a thick accent during a recent rehearsal.

“A Hillbilly Christmas Carol” will feature a first for SHS theatre sponsor Joe Simmons — for the first time since he took over the department in 2006, he will have a student sitting in the director’s chair.

It’s definitely taken some getting used to, he said.

“It’s been a challenge,” he said. “You don’t want to butt in every few minutes, because then the cast starts to question it, and then the director will start to question it. So I’ve had to give them space to figure it out on their own.”

For Sibley — who’s been in the theatre department since fifth grade when he drew elephants for a production of “The Lion King” — this was a chance to see how the other side of theatre operates.

“I’ve always observed and acted, and then Mr. Joe asked if it was time for me to see the other side of things, and I thought it was,” Sibley said.

How has it been being in charge?

“It’s definitely different,” he said with a laugh. “I was like, ‘Do people always miss this much?’ And Mr. Joe was like, ‘Yeah.’”

Sibley said the play runs about 20 or so minutes long but that he and the cast hope to add another 10 to 15 minutes of improvisation — a way for them to make the play their own.

“The actors are really good with coming up with different scenes,” Sibley said. “We always try to add new parts and scenes, and it just adds a different effect that no other theater can make. Not saying other theaters can’t add their own stuff, but they won’t have the same little tweaks we’ll have in our play.”

Though the cast will add its own flair, it’ll be a familiar story to all as Joshua Frunheiser — a swamp-dwelling version of Ebenezer Scrooge — must soften his hard heart and celebrate the holidays with family and friends.

But Sibley and crew still plan on making it their own.

“The thing I like about this is we get to make it our own and change and tweak things,” Sibley said. “Every now and then I suggest things to the actors, and they suggest things back. In a sense, we almost come up with a new way of looking at it. We get to Springfield-fy it and add new things and make it a play we can all like.”

To book a performance of “A Hillbilly Christmas Carol,” contact Simmons by emailing joe.simmons@lpsb.org or by calling Springfield High at (225) 294-3256.

Check out these Livingston Parish headlines from November 19, 2018!

Nicky Robert Babineau, a native of Hinton, West Virginia, and …