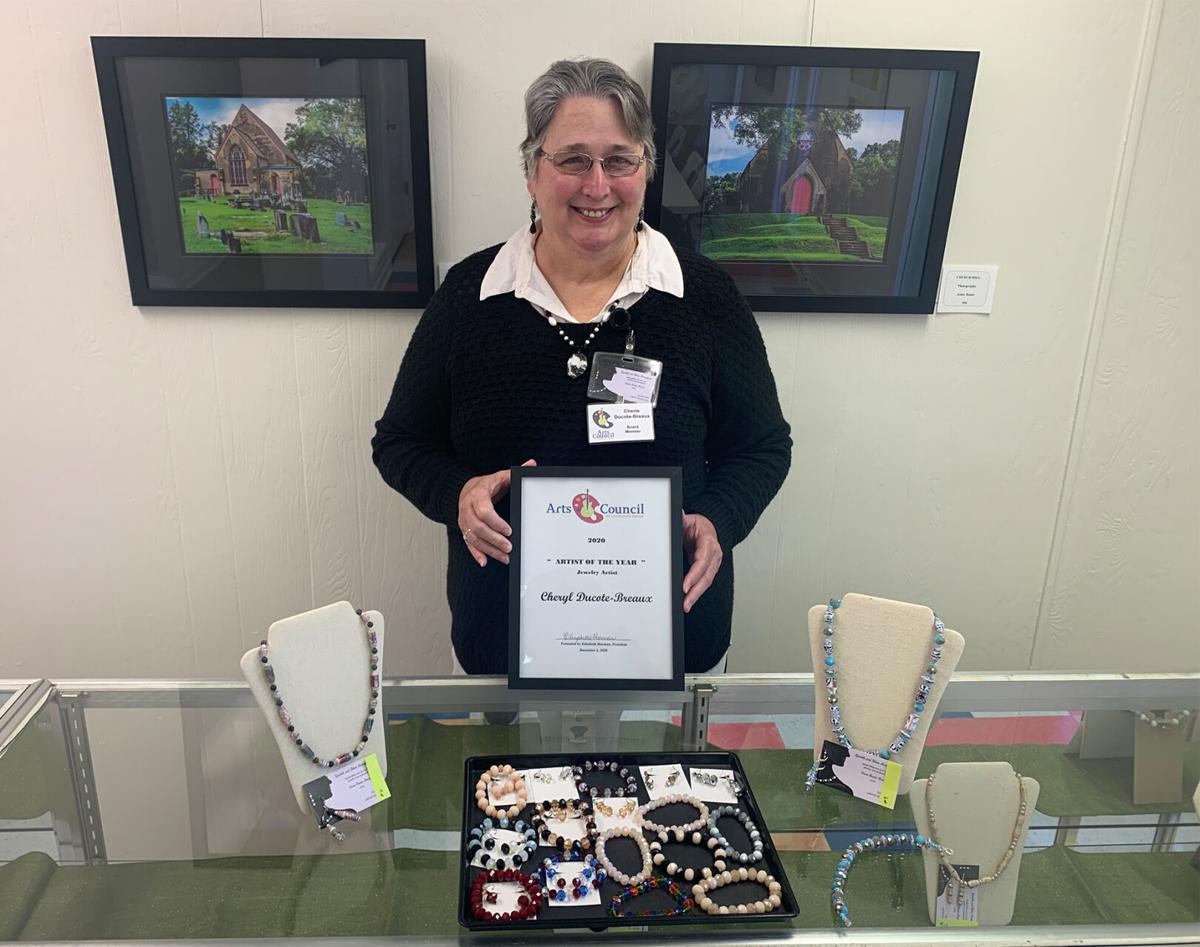 Cherie Ducote-Breaux, a repurposed jewelry maker in Denham Springs, was named the 2020 Artist of the Year by the Arts Council of Livingston Parish. 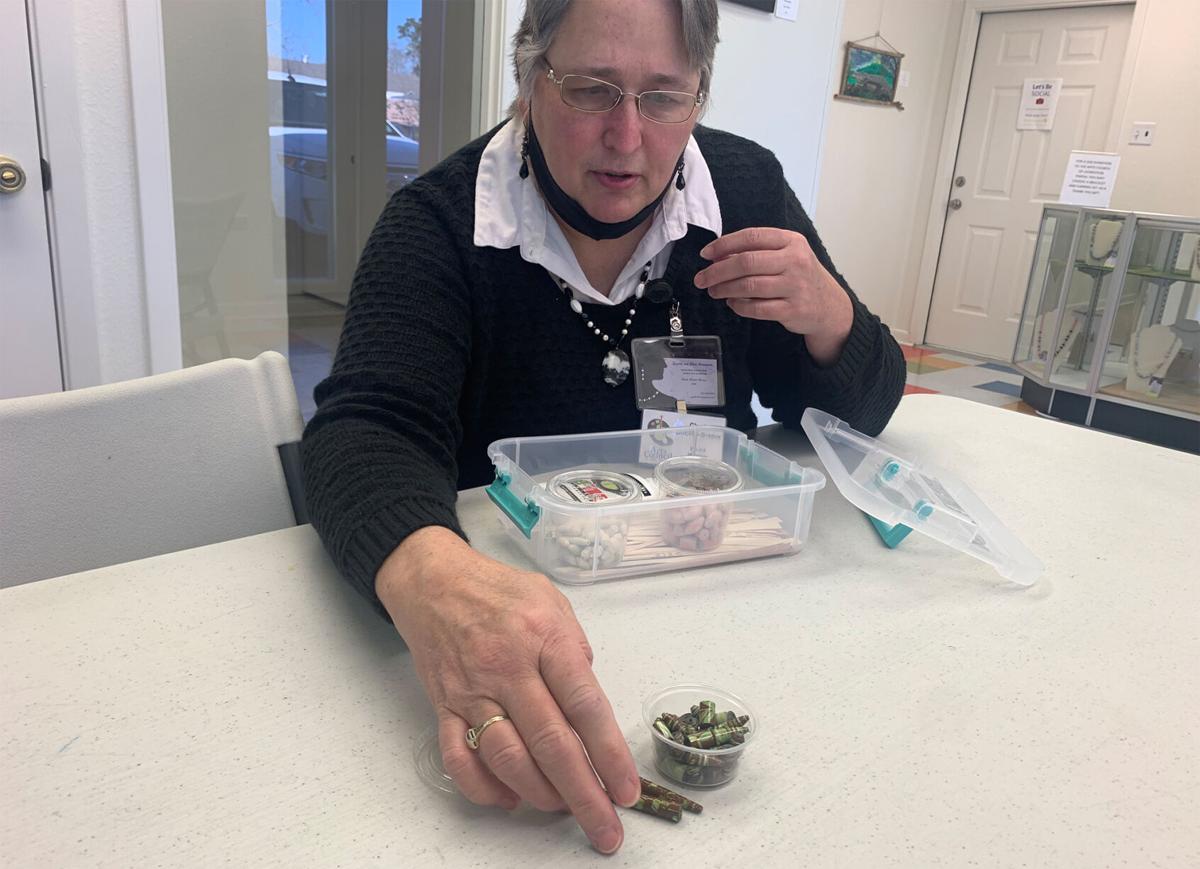 Cherie Ducote-Breaux, a repurposed jewelry maker in Denham Springs who was named the 2020 Artist of the Year by the Arts Council of Livingston Parish, looks over paper beads.

Cherie Ducote-Breaux, a repurposed jewelry maker in Denham Springs, was named the 2020 Artist of the Year by the Arts Council of Livingston Parish.

Cherie Ducote-Breaux, a repurposed jewelry maker in Denham Springs who was named the 2020 Artist of the Year by the Arts Council of Livingston Parish, looks over paper beads.

Instead, she learned to make her own.

And this year, she was recognized for her creations.

Ducote-Breaux, a repurposed jewelry maker in Denham Springs, was named the 2020 Artist of the Year by the Arts Council of Livingston Parish.

The 17th winner of the award, Ducote-Breaux’s work has been featured in the downtown gallery for the last four months. Her work will be on display until the current exhibit ends Saturday, April 24.

Ducote-Breaux was officially recognized during the Arts Council’s opening exhibit of 2021, when she was presented the honor by former President Liz Harmon, another Artist of the Year winner.

While making the presentation, Harmon lauded Ducote-Breaux for being a longtime member of the council’s board of directors and for making numerous contributions to the local arts community.

Speaking with The News earlier this year, Ducote-Breaux said making jewelry led her to join the Arts Council, which has now become “a major part” of her life. A Livingston Parish resident for more than 30 years, Ducote-Breaux has been a part of the Arts Council for several years and has displayed her work in many exhibits. She has also led various classes at the gallery.

“I enjoy the diversity at the Arts Council and the chance to learn new things,” she said. “There’s so many people, and each person has his or her own special talents. It’s nice to share and to bring art to the community.”

Ducote-Breaux is known for her “Sparkle and Shine” handcrafted jewelry and accessories, which include earrings, necklaces, bracelets and specialty jewelry. She makes her pieces using a variety of paper beads, stone beads, glass beads, pearls, and wire wrapping.

Ducote-Breaux said she got interested in repurposing jewelry due to a nickel allergy that “kept me from wearing regular jewelry.” She started making her own jewelry around 20 years ago after finding a pair of earrings she liked that also happened to be hypoallergenic. The first piece she made — a necklace to match the earrings.

She eventually joined the now-defunct Baton Rouge Bead Society and “learned a lot” with the group. She also learned from friends and the internet and never had to receive any formal training.

“YouTube is a great place to find out information on just about anything,” she said.

Nowadays, Ducote-Breaux said she “sits in front of the T.V.” to work on her jewelry, using construction paper and wallpaper to make her beads. After cutting the paper, she rolls it using a bead roller, glazing it while she rolls.

Once the beads are dry, she adds a coat of polyurethane to seal the bead.

“You would not know its paper looking at the finished product,” she said, holding a necklace in her hand.

Ducote-Breaux said she was “surprised” when she was named Artist of the Year, saying she cast her vote for someone else. But she said she was appreciative of the recognition for something she loves doing.

“I like creating with my hands,” she said. “And this lets me do that.”