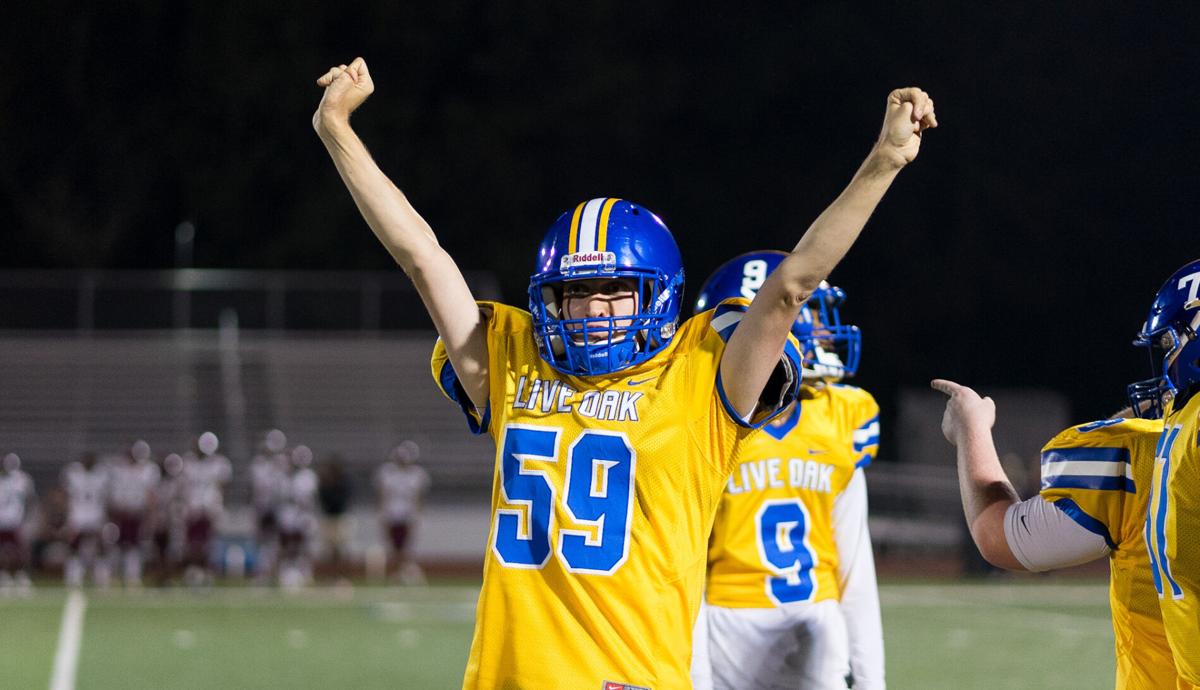 Live Oak High’s Ethan Champagne (59) celebrates after scoring a touchdown for the Eagles on Friday, Nov. 13, 2020. 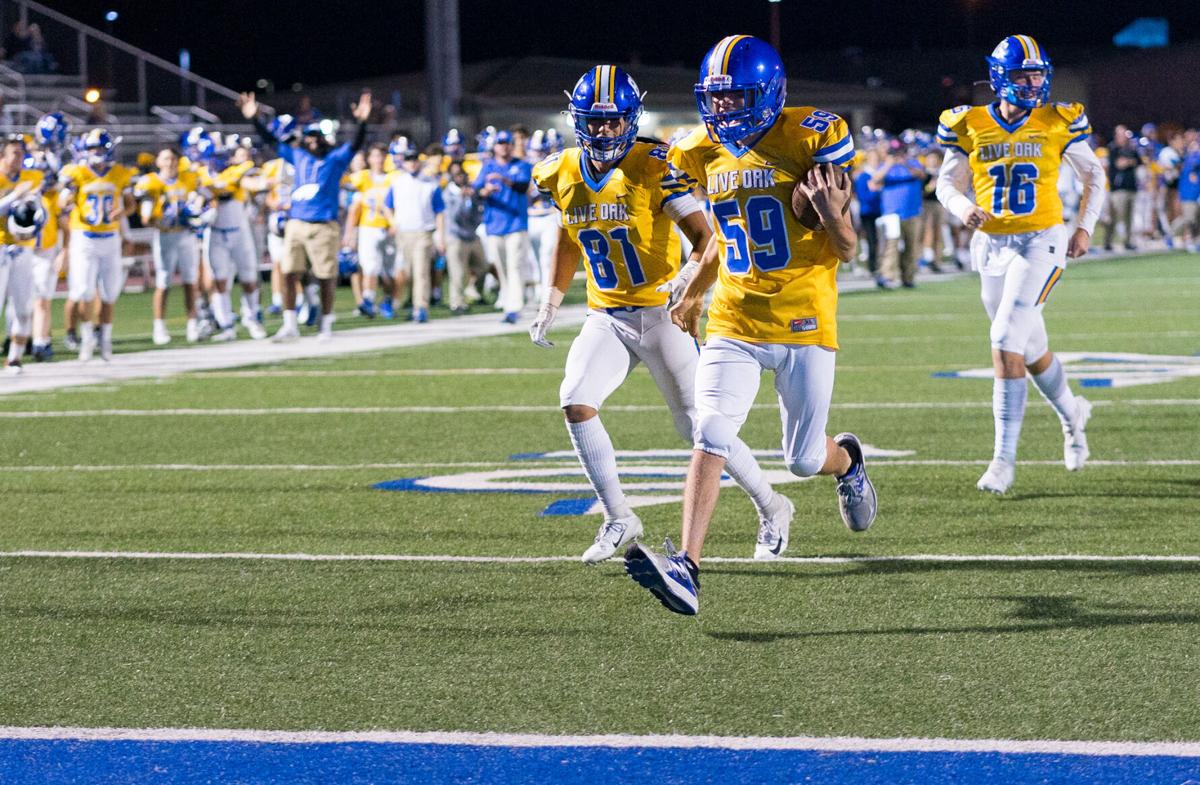 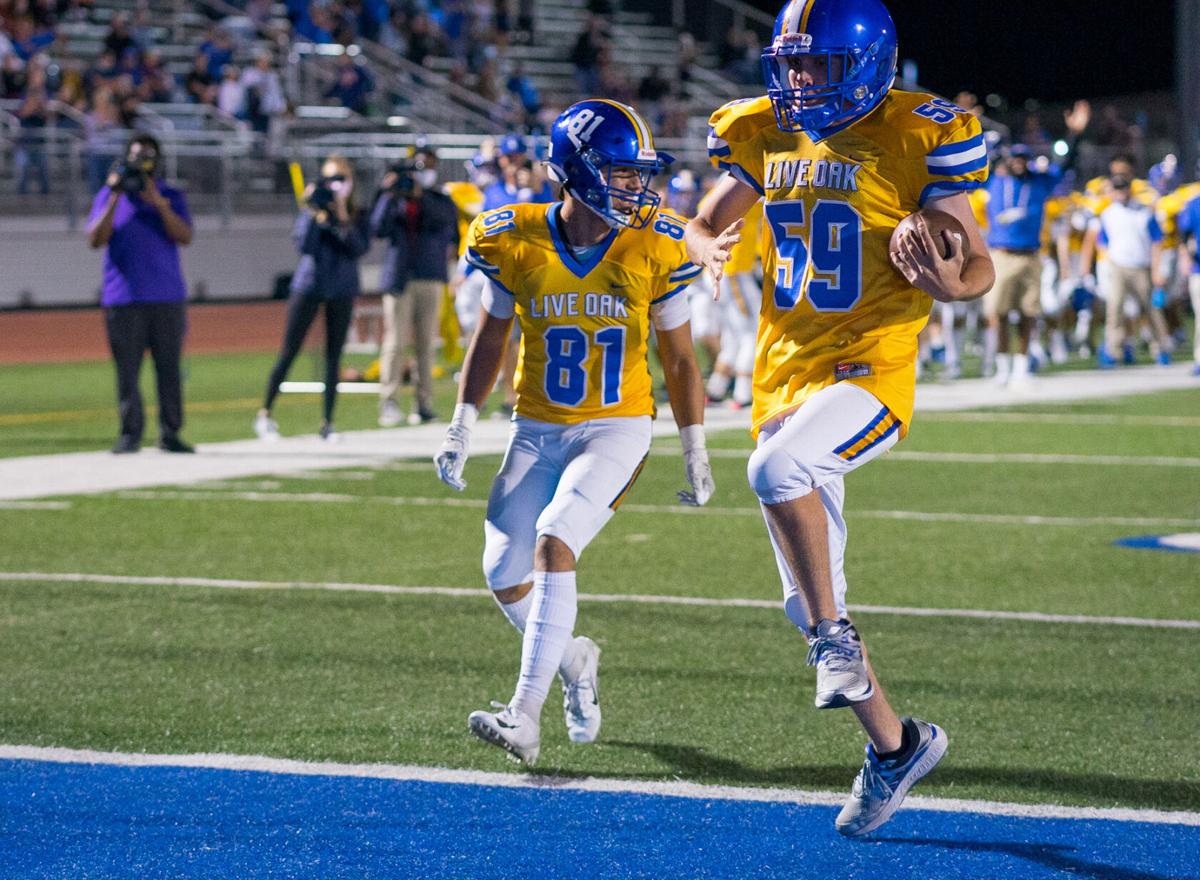 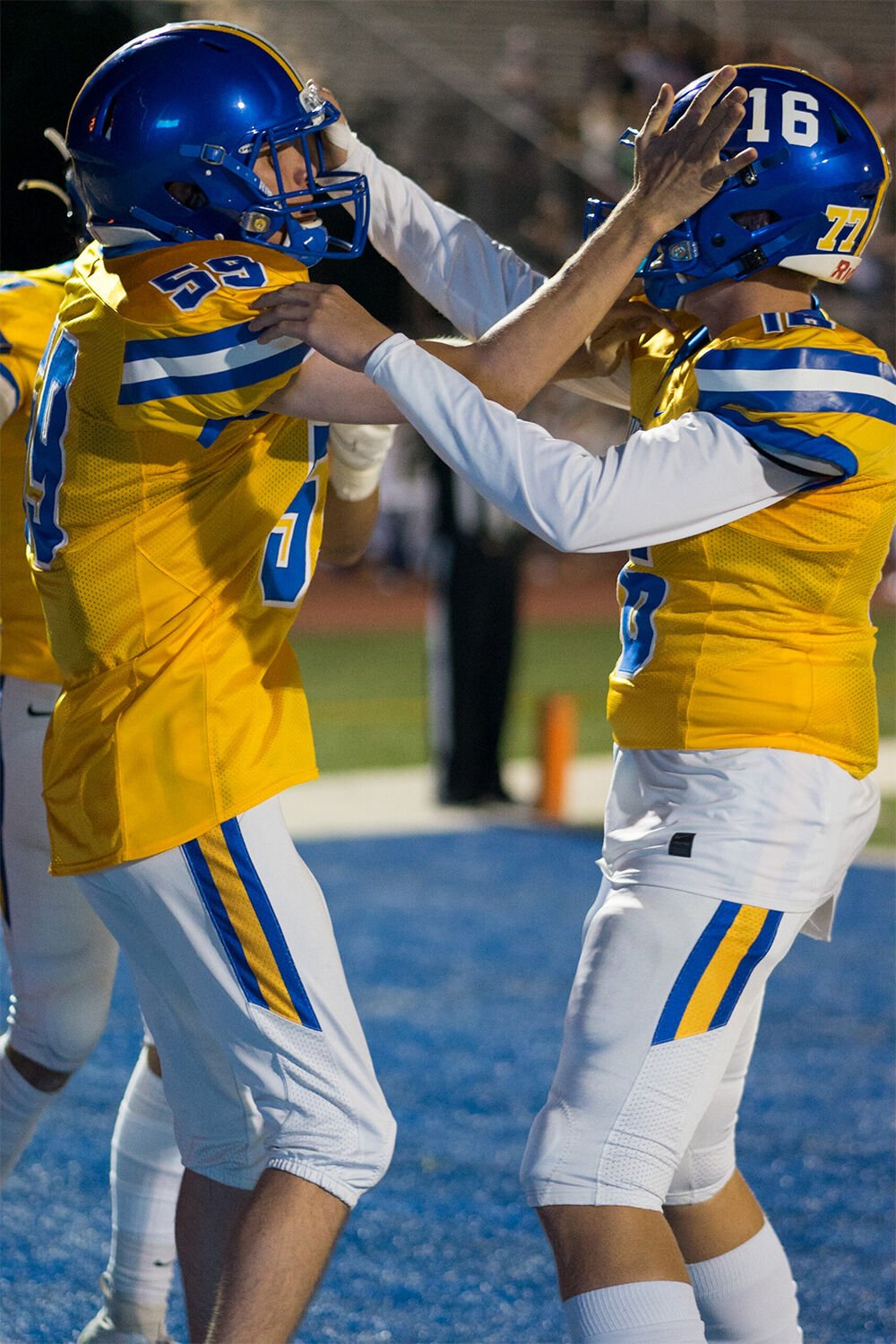 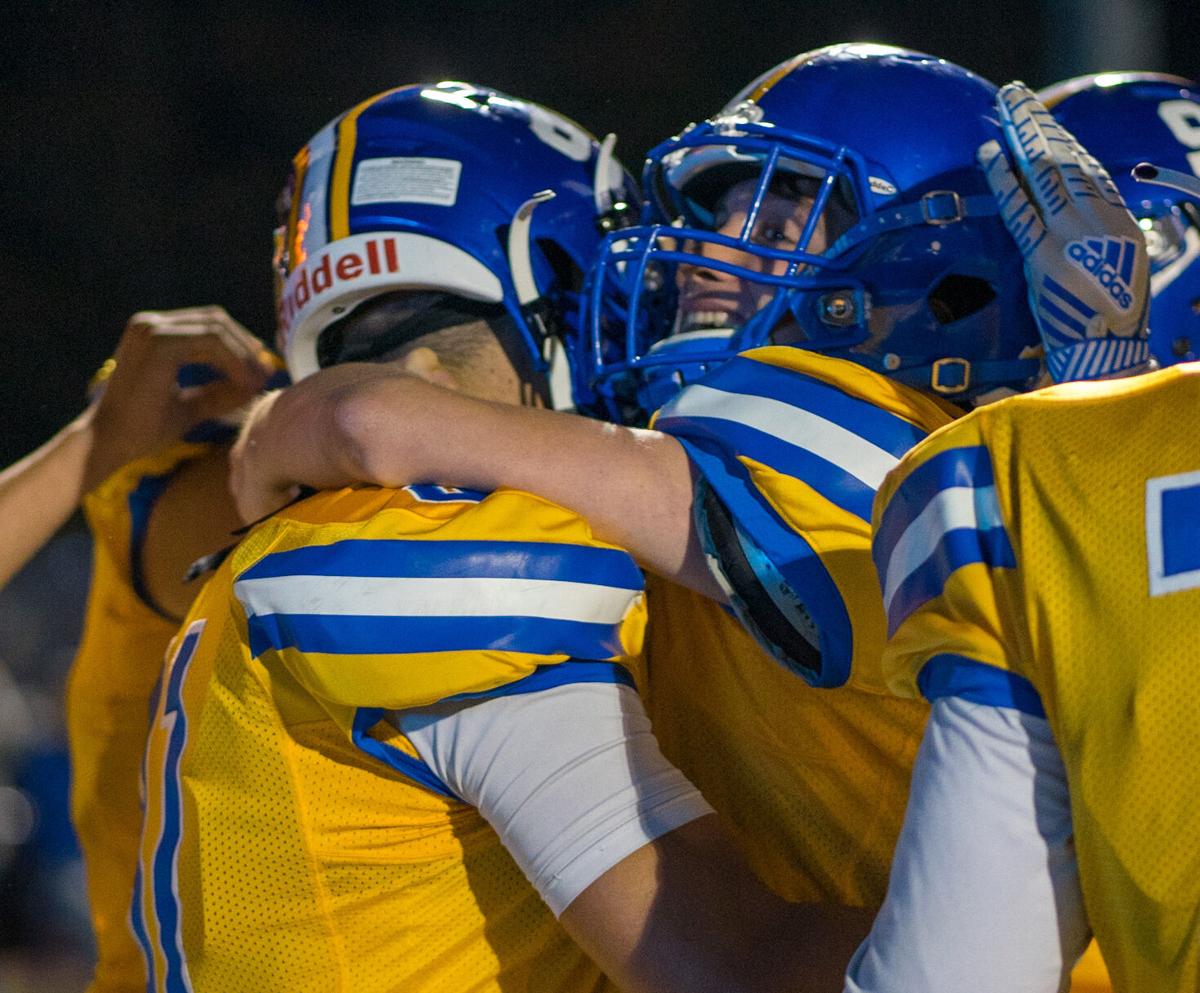 Live Oak High’s Ethan Champagne (right) hugs a teammate after scoring a touchdown for the Eagles on Friday, Nov. 13, 2020. 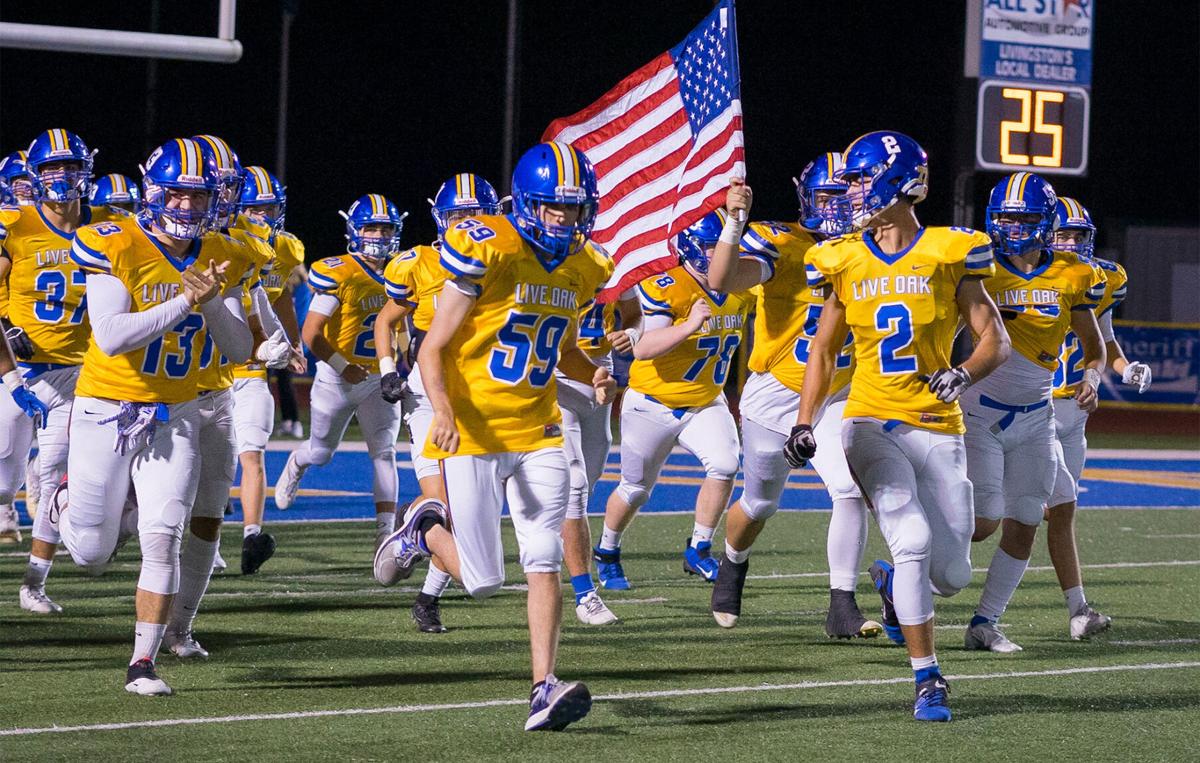 Live Oak High’s Ethan Champagne (59) leads the Eagles onto the field for their game against Pineville on Friday, Nov. 13, 2020.

Live Oak High’s Ethan Champagne (59) celebrates after scoring a touchdown for the Eagles on Friday, Nov. 13, 2020.

Live Oak High’s Ethan Champagne (right) hugs a teammate after scoring a touchdown for the Eagles on Friday, Nov. 13, 2020.

Live Oak High’s Ethan Champagne (59) leads the Eagles onto the field for their game against Pineville on Friday, Nov. 13, 2020.

WATSON -- The most important touchdown for Live Oak last week came before the game even started, when the football team’s biggest fan got to live out his dream on the gridiron.

Ethan Champagne, a special needs student, was given his moment to shine under the bright Friday night lights when he dressed out and scored a touchdown prior to the Eagles’ game against visiting Pineville on Friday.

The Eagles mobbed Champagne after he crossed the goal line, and the star of the night excitedly took off his helmet and tossed it aside, throwing his arms in the air and flashing a wide smile for all to see.

Many in the stands got choked up during the spectacle as chants of “Ethan” erupted across the stadium.

“Does anyone have some Kleenex?” one woman asked as she wiped tears from her face.

It was certainly a dream-come-true moment for Champagne, a 19-year-old senior who as a toddler was diagnosed with Fragile X Syndrome, a genetic disorder characterized by mild-to-severe intellectual disability.

The exact number of people who have Fragile X Syndrome (FXS) is unknown, but the Center for Disease Control estimates that roughly 1 in 7,000 males and 1 in 11,000 females have been diagnosed with FXS, according to a review of research studies.

Despite the daily challenges Ethan faces from FXS, which mostly affect his learning, he is as “social and outgoing as they come,” his mother Rita Champagne told The News.

Ethan is very involved at school, particularly through Live Oak High’s REACH (Respect Everyone and Create Harmony) Club. He is also a fixture at the parish’s Special Olympics held every year in Watson and the annual STARS (Special Teens Among Real Scenes) prom for special needs students.

Ethan is so beloved by those around him that in 2016, his classmates and teachers launched a campaign to help him realize another dream of his — to meet singer Bruno Mars, the global icon responsible for Ethan’s favorite song, “Uptown Funk.”

Gettin' Down with Ethan Champagne

Students and teachers made their own music video to the hit song four years ago, with Ethan wearing Mars’ trademark fedora and hot pink shirt from the song’s official music video. The music video has been viewed more than 33,000 times on Youtube, with thousands catching a nearly 5-minute clip of Ethan’s dance moves.

Two of Ethan’s friends even designed T-shirts to sell to other students and raised more than $600, with proceeds going to the National Fragile X Foundation.

“Ethan is very outgoing and very energetic,” Rita said. “He loves people and socializing. He loves dancing and music, and he definitely likes to be in social settings. He just loves being around people and is very loyal to those that make him feel included.”

But perhaps above all else, Ethan is “a die-hard Eagle fan,” his mother and other family members said.

Ethan never misses a home game during football season, always ready — and absolutely willing — to cheer his Eagles on to victory. He can always be found — and most of the time, heard — cheering from the front row, usually wearing a Live Oak High hat or T-shirt, or sometimes both.

He passes out fist-bumps with every first down and screams out “Go Eagles” with every touchdown.

“He absolutely loves this program,” his grandmother said.

Ethan’s passion for the football team led him to make one wish for his senior year, Rita recalled.

“His one wish was to be able to play football with the Eagles,” she said. “This was such a dream of his.”

Perhaps the only person who knew of Ethan’s dream more than his mother was Tyler McGrew, an assistant coach on the football team and Ethan’s special needs teacher. McGrew was a paraprofessional when he first met Ethan in his freshman year and has now been his teacher for more than two years, with the two forming a close bond.

McGrew said the thought of putting Ethan in a game had been rattling in his head for “a long time,” but the idea picked up steam earlier this year when a parent made the suggestion.

Along with special education teacher Jessica Bonura, the plan was hatched to get Ethan in the game. To McGrew, no one was more deserving of such a moment than Ethan, with the only possible exception being his younger brother, Matthew.

“And everyday in class, Ethan talks to me about running a touchdown. It’s something he’s always wanted to do, and I’m glad we’re able to make it finally happen.”

Despite telling his mother a couple weeks prior, McGrew finally filled Ethan in on the plan Friday afternoon, hours before the game kicked off.

“I thought he’d yell, but he was kind of in shock,” McGrew recalled. “Before I said anything about it, I told him to stay calm, so when I told him, he just sat there until he finally said, ‘Really?’ And I said, ‘Yeah man, it’s gonna happen tonight.’ Then he asked if it was going to be worth seven points, and I said it was.

“Then he was all about winning and just kept asking if we were gonna beat Pineville.”

“When he got off the bus, he came in and looked all nervous and said, ‘Something’s gonna happen tonight,’” she recalled. “I asked what he was gonna get to do, even though I already knew, and he said he was running a touchdown. He was so excited.”

Ethan got the full gameday experience, arriving at the Live Oak football locker room a little after 6 p.m. to put on his shoulder pads, football pants, No. 59 jersey, and a helmet. He warmed up with the offensive lineman and even went through some pregame stretches before taking photos with a plethora of fans.

With only minutes until the game started, Ethan led the team onto the field through the inflatable tunnel in the end zone facing campus, his arms thrown in the air as fireworks went off. He quickly made his way to the student section, where some of his classmates begged for high-fives, and finally joined his teammates on the sideline for the national anthem, prayer, and the coin toss.

After that, it was his time.

With both teams squaring off at the Pineville 30-yard line, Live Oak quarterback Brock Magee took the snap and handed the ball to Ethan, who ran down the right side of the field and raced to the end zone as players from both teams ran behind, cheering him on.

Several family members and friends were on hand for Ethan’s highlight that was followed by a sideline dance to — of course — “Uptown Funk.” Following the run, Ethan returned to the stands to watch the remainder of the game, a 34-20 victory for his beloved Eagles.

Hours after the game, Ethan was still awake rewatching the video of his touchdown run, Rita said. She called it “a great night for the entire family” and added that she was taken aback by the reactions from the crowd, which ranged from cheers to tears.

“People have always been supportive and encouraging, but I didn’t realize to what extent they loved him and supported him,” Rita said. “This community and that school has been so accepting of not just my kids, but all of our special needs kids.

“For them to go out of their way and make this happen means a lot, especially for [Ethan] being a senior and having to miss out on so many other things because of covid. This is extra special. This is something this family will never forget. Ethan definitely will never forget about this.”

Immediately following Live Oak’s victory over Pineville, coach Blane Westmoreland took a few minutes to talk about “Live Oak’s biggest fan.” He thanked Pineville coach Darin Moore and his players for “allowing us to have this special moment” and lauded Ethan for his big run.

‘That’s what makes this special — it’s not always about X’s and O’s and wins and losses, it’s about making memories,” Westmoreland said. “And we just made a young man’s year and maybe a lot longer.”

However, the football coach did say he was going to have to sit down with Ethan to discuss his post-touchdown celebration antics.

“We’re gonna have to talk to him about throwing his helmet,” Westmoreland said with a laugh. “But in all seriousness, that was a heck of a job by everyone tonight, and we’re all proud of Ethan.”