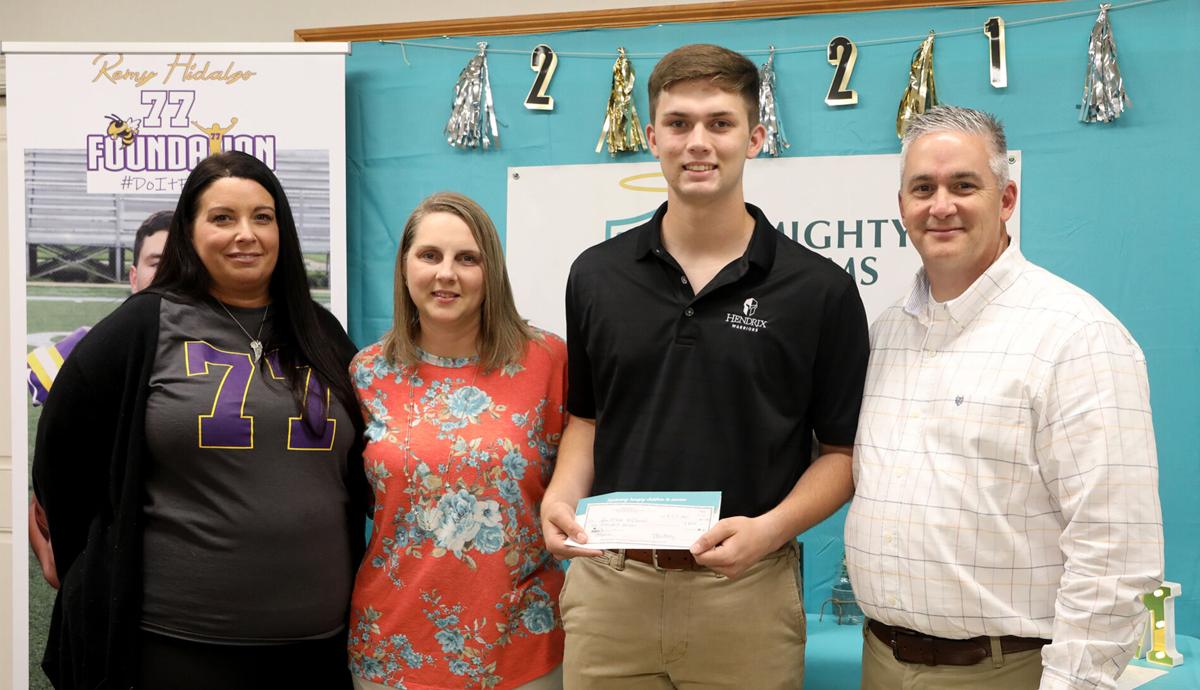 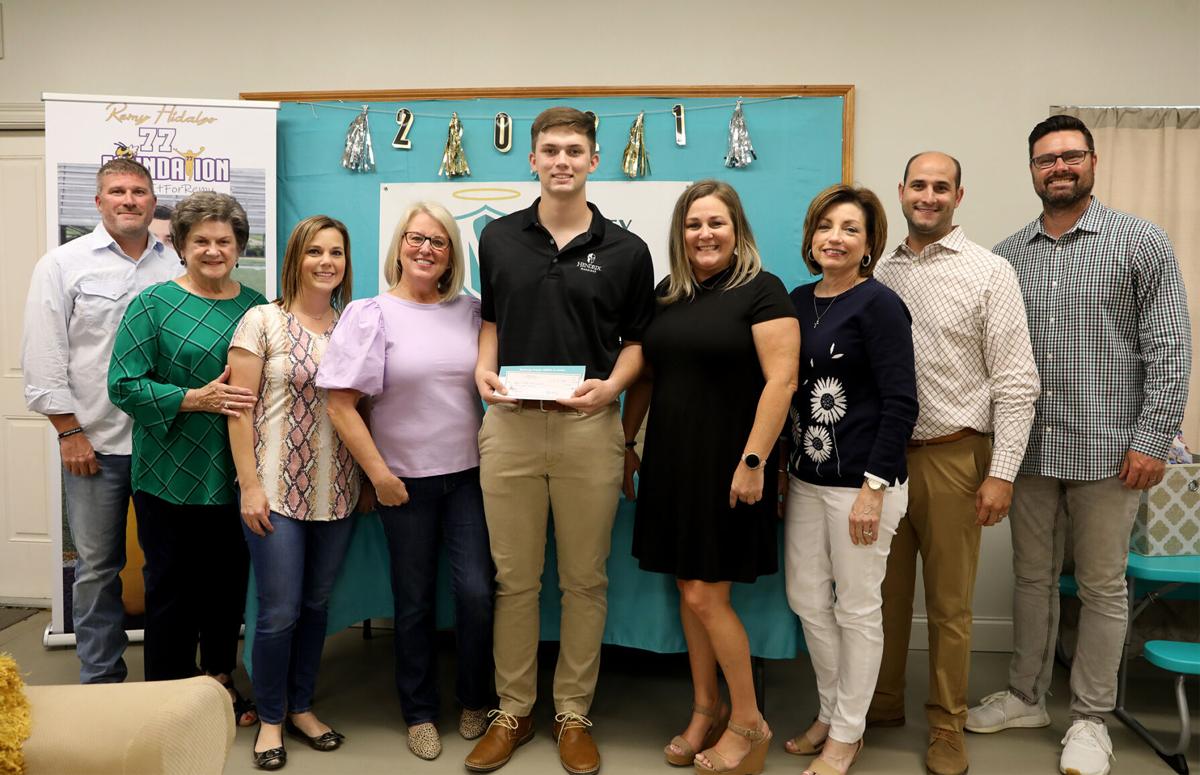 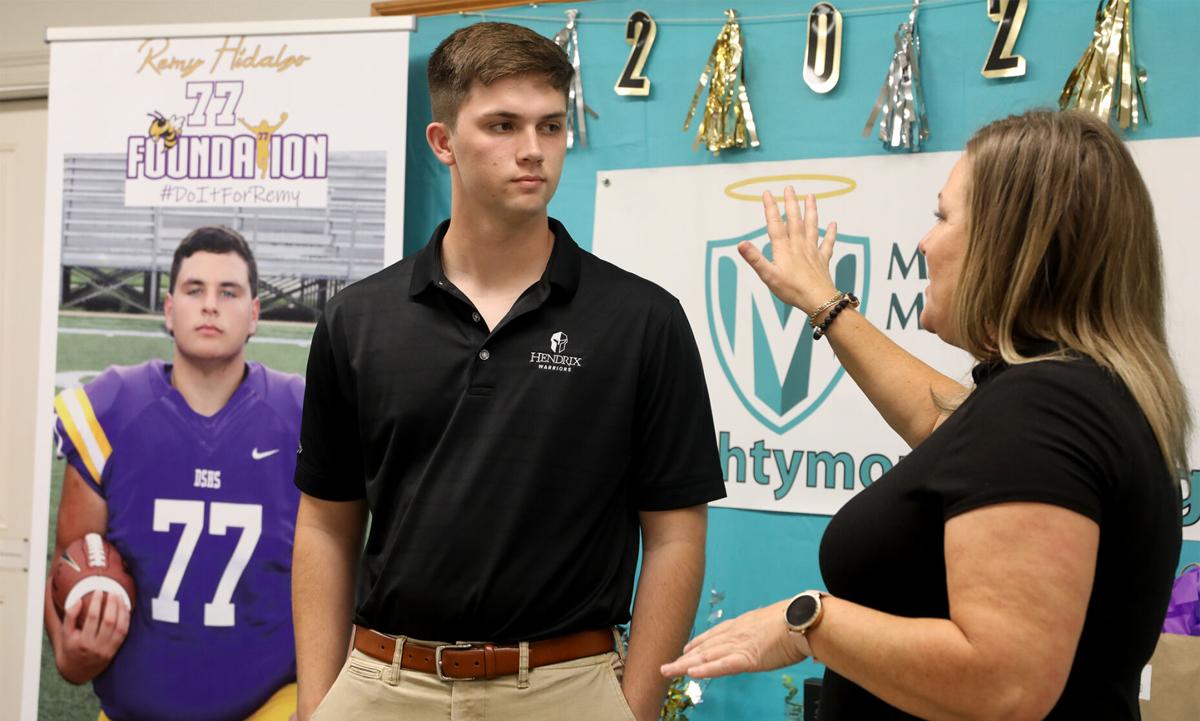 John McDaniel, left, was awarded the inaugural Community Compassion Scholarship by Mighty Moms. The scholarship was given in memory of Remy Hidalgo, the Denham Springs High student and dual-sport athlete who passed away in September 2020. Also pictured is Mighty Moms co-founder Beth McCormick.

John McDaniel, left, was awarded the inaugural Community Compassion Scholarship by Mighty Moms. The scholarship was given in memory of Remy Hidalgo, the Denham Springs High student and dual-sport athlete who passed away in September 2020. Also pictured is Mighty Moms co-founder Beth McCormick.

McDaniel can still remember chatting with “Big Remdog” in their nearby lockers after another grueling practice, their conversations touching on football, school, and life.

McDaniel can still remember the day he found out “Big Remdog” passed away, a gut punch to him, the rest of the Denham Springs High football team, and the community at large.

But McDaniel will never forget what the late Remy Hidalgo, whose tragic death in September 2020 sent shockwaves throughout Livingston Parish and the state, taught him in the brief time they were together.

“In reality, loving people, being kind, speaking encouraging words, and letting them know their lives are important is the most impactful way to make a difference in the community in which we live,” McDaniel wrote in an essay.

“That is how Remy treated people and that is how we should all treat one another.”

Near the end of the essay, McDaniel gave a simple directive: “Be like Remy.”

For his four-page essay, McDaniel was awarded Mighty Moms’ inaugural Community Compassion Scholarship, a $1,000 prize that this year was given in memory of Hidalgo.

The essay asked seniors to write down how being a dual-sport athlete or member of a team will influence their future involvement within their community, whether that be inside or outside of Denham Springs.

McDaniel was presented the scholarship by Mighty Moms co-founders Dawn Birdsong and Beth McCormick and Mighty Moms board members. Also attending the presentation were his parents, Billy and Beth McDaniel, and Ashley Roberson, Remy’s mother.

'It's all good' | Community comes together to remember Remy Hidalgo

Nicknamed “Big Remdog” by friends and described as “a big teddy bear” and “a great teammate” with an infectious personality, Remy died Sept. 18, 2020, a few days after suffering a heat stroke at football practice.

The Livingston Parish community rallied behind his family and the football team after his passing. Schools held free dress days to raise money for his loved ones, a candlelight vigil drew 1,000 people in prayer, and rival football teams made heartfelt gestures to the Yellow Jackets before and after games all last season.

To this day, the marquee in front of Denham Springs High regularly displays “77,” Remy’s jersey number.

McDaniel, who was the team’s starting quarterback last season, wrote in his essay that though the team’s record wasn’t what they had hoped for, they still found victory through their beloved teammate.

“The victory we achieved is so rare these days, but Remy brought it to us — unity,” McDaniel wrote. “Our community is diverse with many backgrounds, races, ethnicities, and beliefs. This event brought our whole community and state during this time in ways that had never been seen before.

“Rivals from down the road came to support us, LSU players and coaches poured out their thoughts and prayers, and countless others spread Remy’s story across the country and around the world. I realized that through the struggle of heartbreak and loss, we all have each other.”

McCormick and Birdsong had already planned on creating a scholarship for a graduating senior before Remy’s passing. They envisioned the award going to a senior “who understands compassion in the community” and “how they’re going to take what they’ve learned in our parish for the rest of their life.”

“We didn’t want it to be about Mighty Moms,” Birdsong said. “We wanted this scholarship to be something the kid has earned because of their compassion for their community.”

Following Remy’s passing, the co-founders said they decided to give the inaugural scholarship in his honor after seeing the way the community came together.

“Everybody came together in such a big way, and it really showed what the point of the scholarship is,” McCormick said. “We wanted the kids to recognize what a community is, what compassion is, and how you continue that in a tragedy or a positive time.”

Birdsong and McCormick said the scholarship will memorialize something or someone different every year, whether it’s something positive or something tragic.

“Every year it’ll look a little bit different,” McCormick said. “But the core of it is going to be the same.”

Selecting a winner was no easy task, Birdsong and McCormick said, adding that the submissions “were all worthy.” But in the end, the one by McDaniel stood out, with McCormick telling him, “It made me cry from start to finish.”

For McDaniel, writing the essay brought up many emotions as he detailed the entirety of how Remy’s death has impacted him.

Sitting in his room, McDaniel put all his thoughts and feelings on paper. Whenever he got to a part about Remy, he said “a surreal feeling” swept over him. Months later, he’s still in disbelief about what happened to his friend and teammate.

“I just spoke from the heart,” McDaniel said. “Everything I had learned over the past year was just compiled into that essay. Just knowing Remy taught me so many lessons over the past seven months.”

The essay began in McDaniel’s sophomore year when he first met Remy, who was a year younger than him. He wrote that he looked forward to having “Big Remdog blocking for me on the line” and mentioned Remy moving lockers near him, where they’d spend nearly two seasons.

McDaniel said they’d talk about Remy’s truck or football, though conversations routinely went outside their shared sport. McDaniel described Remy as “always happy” and someone who “inspired me to work harder.”

On the second page, McDaniel wrote about the day the team received news of their teammate’s passing. He told The News everyone was “completely silent” when he walked into the locker room that morning, and in his essay he recalled how the entire team later sat on the 50-yard line “and cried together.”

McDaniel, who had visited Remy one night in the hospital with other teammates, called that day “a pivotal point” in his life.

“Many of my teammates had never experienced loss before and during this time we learned what it meant to truly be brothers,” McDaniel wrote.

Near the end of his essay, McDaniel mentioned going to Hendrix College in Arkansas, where he’ll continue his football career in the fall. He said Remy motivated him to take the next step because “it is something that he wanted to do so badly.”

“I am fortunate to have that opportunity to play and I will think of him whenever I am on the field,” he wrote.

McDaniel closed the essay by saying he hopes to have “half of the impact Remy had on his city and state.”

“Even though the next steps of my journey will take me to another city in a different state, I will do my best to impact my new community in ways that will honor the memory of Remy,” he wrote.