What the state's response would be to a defiant Watson restaurant is now known.

On Friday, Gov. John Bel Edwards announced that the Louisiana Department of Health (LDH) had their Temporary Restraining Order (TRO) approved through the 21st Judicial District Court. LDH's TRO prohibits Firehouse BBQ from continuing operations. The Bunch family, owners of Firehouse BBQ and the parent LLC God's Table, have until Aug. 18 to provide reason why the restraining order should not be enforced. 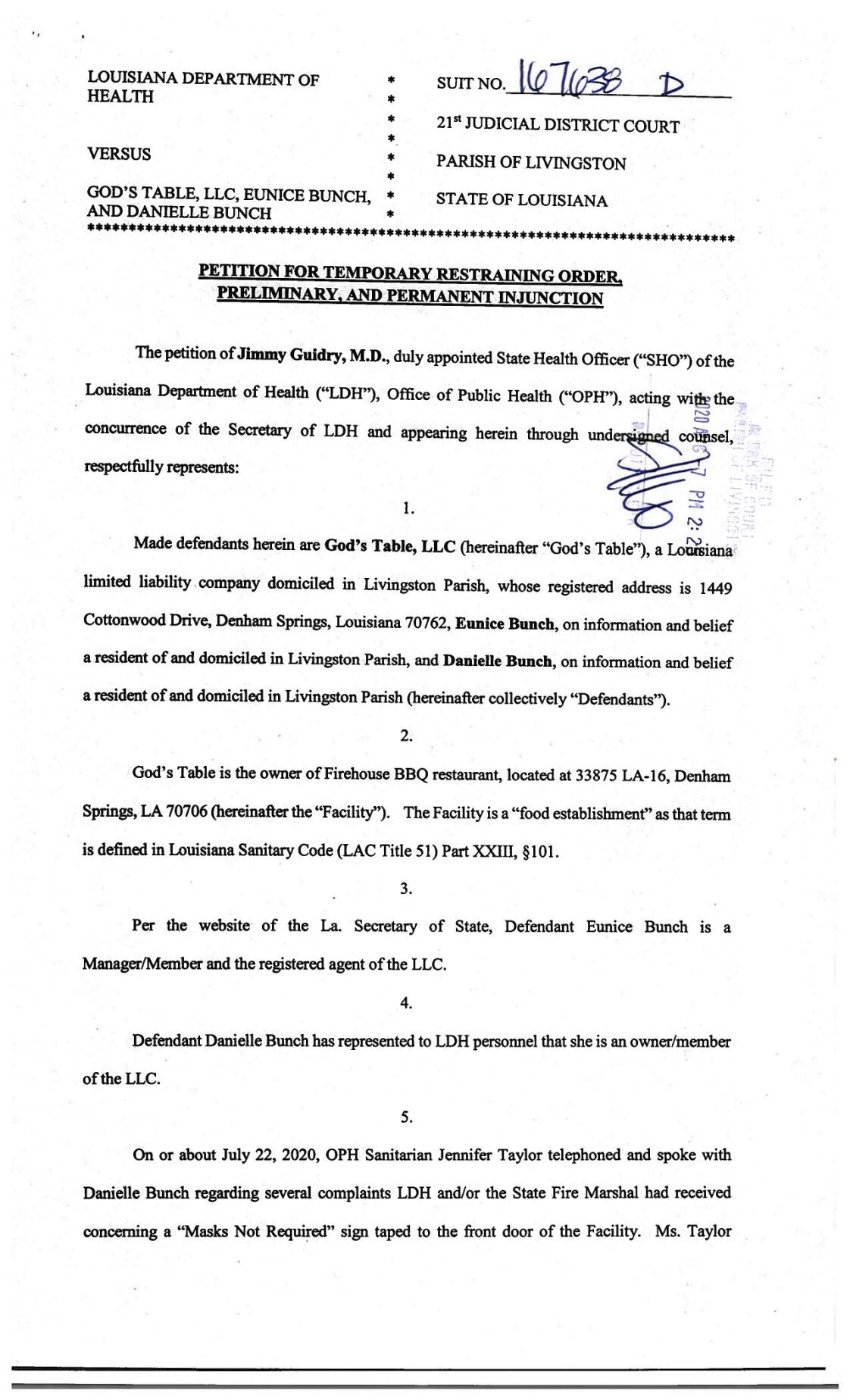 The state had already revoked the establishment's food permit the previous Friday.

During Edwards’ press conference on Thursday — hours after a Baton Rouge judge sided with him in a lawsuit by Jefferson Parish business owners seeking to lift his restrictions — a reporter asked the governor if he planned to “crack down” on Firehouse BBQ.

In response to the next question asking what measures might be taken, Edwards said: “We will share that with you when the time’s appropriate.”

“When will that be?” the reported asked.

The appropriate time, based on the governor's actions, was on social media Friday afternoon, after the TRO was signed. The case was heard in Judge Brenda Ricks' court, however, Judge Brian Abels was the presiding judge and approved the matter.

"The (LDH) prioritizes education over such enforcement actions and that has largely worked in the response against COVID-19," Gov. Edwards' press release said. "The overwhelming majority of businesses are following the Governor’s orders and necessary mitigation measures to protect their employees and customers."

LDH and the State Fire Marshal received complaints on July 21 and July 22 indicating that the restaurant had posted notices on its front door and on social media saying it was not requiring the wearing of masks or face coverings by employees or customers.

An LDH inspection on July 27 confirmed the presence of the described front door sign and that Firehouse BBQ was not requiring employees or customers to wear masks or face coverings. Upon completion of the inspection and receipt of the inspection report, the owner of Firehouse BBQ made it clear the restaurant would not be complying with the Governor’s proclamations.

According to the July 27 business inspection, Firehouse BBQ was docked for tables not being spaced appropriately and employees not wearing face masks.

In the report, the inspector noted that the owner said “some employees have medical conditions that prevent them from [wearing] a face covering and others wear them electively.”

In a July 23 post pinned at the top of Firehouse BBQ’s Facebook page, the owners said “the use of masks for extended periods of time during shifts by our employees has caused several medical reactions that are negatively impacting their ability to perform their positions.”

Firehouse BBQ has remained in operation since its food permit was pulled and has thanked the public for the “overwhelming outpouring of support.”

The Bunch family announced via social media that they would not comply.

Saturday morning, the restaurant stated on their Facebook page that they would remain open for business despite the health department's order and masks will continue to be optional. Tables will be spread 10' apart, the post said, in accordance with social distancing requirements.

The post also invited patrons to dine, cater, or order carry-out from Firehouse BBQ to fund an attorney to "fight for their rights as citizens."

After giving the restaurant several opportunities to comply with the Governor’s order, in the interest of the public’s health, on July 31 LDH ordered the restaurant to close immediately, the governor said.

“Defiance of the order to help keep the people of our state safe by this establishment is extremely reckless and irresponsible,” said Gov. Edwards. “Louisiana is number one in the nation for the number of COVID-19 cases per capita, and there is no doubt that this behavior is contributing to the unnecessary spread of this virus.

"That is unacceptable," the governor continued, "we have gone above and beyond to give this owner every opportunity to get in compliance with the order as our intent has always been to work with businesses. The decisions I have made have not been easy, but they have been based on science, the data and recommendations by the White House Coronavirus Task Force, which has designated Louisiana as a red zone state because of the amount of coronavirus here and the percent positivity rate which is above 10 percent.

"It was my hope that the action today would not be necessary, but we are left with no choice as the owner insists on being non-compliant thus jeopardizing the safety of the employees and customers.”

Attorney General Jeff Landry issued an opinion roughly a week after Gov. John Bel Edwards announced masks would be required around the state, stating that it was his belief the mandate was "illegal" and "unconstitutional."

Earlier Thursday, Judge Janice Clark in the 19th Judicial District ruled to uphold the mask mandate, bar restrictions, and 50-person limit on social gatherings Edwards implemented in July in response to the impact of COVID-19 statewide.

The plaintiffs in the suit were business owners Natasha Cvitanovich, owner of Moby’s Bar and Grill; Ronald Dalleo, owner of Cleary Tavern; Justin Molaison, an attorney and musician; and Jennifer Labella Tusa, owner of catering and events business the Crossing.

During his press conference on Thursday, Edwards said “the evidence is clear” that the added mitigation measures are working, citing a recent decline in reported COVID-like symptoms, cases, and hospitalizations.

After reaching 1,600 hospitalizations on July 27, the state is now reporting 1,457 hospitalizations, the lowest since July 17. The state has reported less than 1,500 new cases in each of the last two days, the first time that has happened since June 29-30.

Edwards has repeatedly said any measures he takes are based on data driven by “the recommendations of public health experts and the White House Coronavirus Task Force,” which has designated Louisiana as a red zone state.

“It’s not just that I’m authorized to do it — because we’re talking about lives, I believe that I’m obligated to do these things as well,” Edwards said. “It doesn’t make this easy… but it is absolutely essential, legal, and effective.”

On Thursday, Edwards signed a new order keeping Louisiana under Phase Two for an additional 21 days, through at least Aug. 28. Though the state has seen “modest but sustained improvements” in our numbers related to cases, hospitalizations, and positivity, Edwards said they are “still unacceptably high.”

“We’re doing better, but we still have some work to do,” he said.