Skip to main content
You are the owner of this article.
Edit Article Add New Article
You have permission to edit this article.
Edit
Sections
Multimedia
e-Edition
Subscribe
About The News
Classifieds
Local Businesses
Advertising
Try our app!
1 of 5 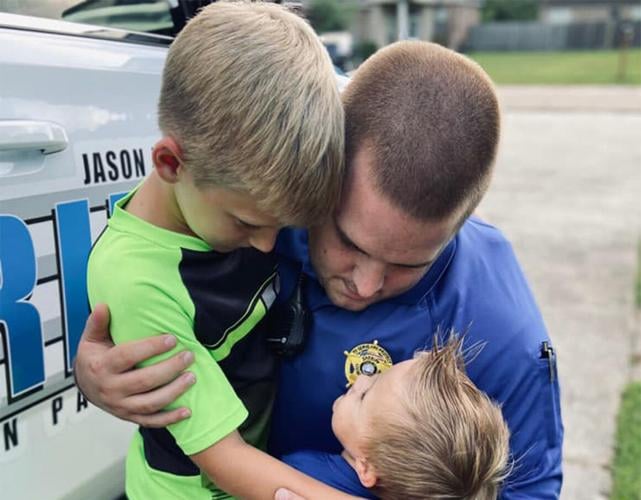 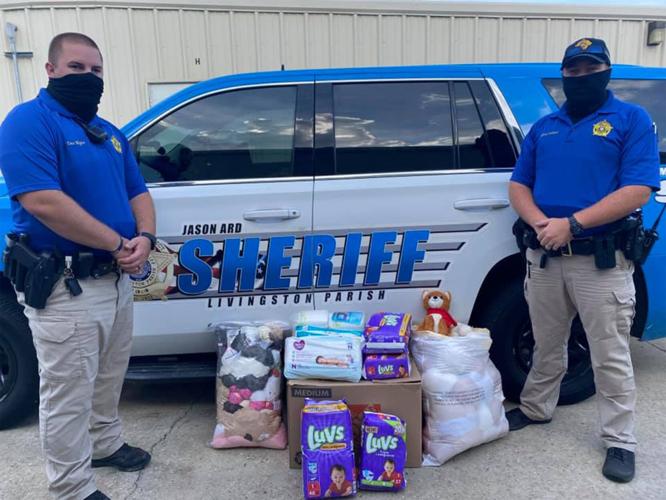 Deputies from the Livingston Parish Sheriff’s Office get ready to pass out supplies to victims of Hurricane Laura. 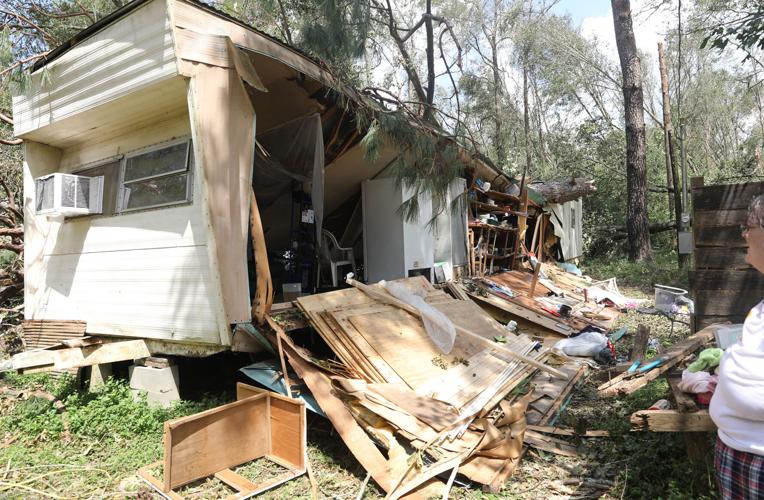 A tree crushed this trailer in Allen Parish during Hurricane Laura, which made landfall with Louisiana on Thursday, Aug. 27, 2020. 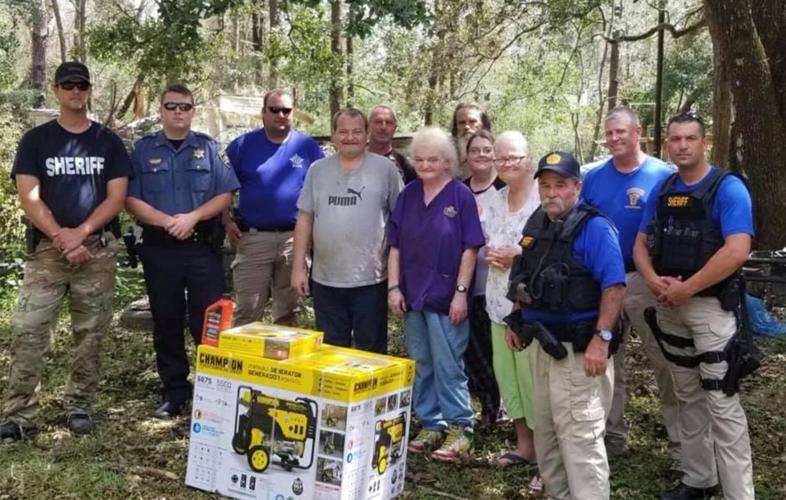 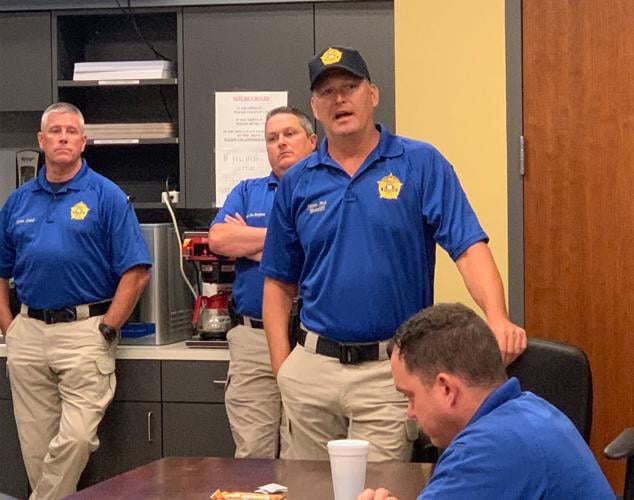 Livingston Parish Sheriff Jason Ard talks with deputies before they leave for Allen Parish to assist in the recovery effort following Hurricane Laura.

OBERLIN, Louisiana -- Sgt. Frank Rizzuto had to fight back tears as he spoke.

Sitting inside one of the command rooms at the Allen Parish Sheriff’s Office, located in the parish seat of Oberlin, Rizzuto knew exactly what the residents of the southwest Louisiana town were going through following the wrath of Hurricane Laura.

A New Orleans native, Rizzuto lived and worked in the Crescent City when Hurricane Katrina hit in 2005. He remembers the darkness that shrouded the city after the power went out. He remembers being unable to communicate with his loved ones for weeks. He remembers pulling dead bodies from the streets.

At one point, tears streamed down Rizzuto’s face as he recounted his own experiences with a natural disaster, his heart going out to those who were currently experiencing their own. Even as he spoke, Rizzuto said words could never adequately express all that goes through your mind in that moment when Mother Nature throws your entire world upside-down.

“You can never prepare for something like this until you’ve lived it,” Rizzuto said. “I can tell you what it feels like, but you don’t really know until you go through it. It just breaks your heart to see people going through this.”

To help in the recovery, Rizzuto and a team of deputies from the Livingston Parish Sheriff’s Office left for Allen Parish last Thursday, hours after Hurricane Laura made landfall as a Category 4 storm that rocked southwest Louisiana.

Though the forecasted “unsurvivable” storm surge was less than what was predicted, the ferocious winds were every bit as advertised, tearing off roofs, leveling buildings, ripping up trees, and leaving hundreds of thousands without power or reliable phone service.

Packing winds of up to 150 mph, Laura was the most powerful hurricane to strike Louisiana, surpassing even the likes of Hurricanes Katrina and Rita. The wreckage from the storm is projected to take weeks — and possibly months — to clear.

On Sunday, Gov. John Bel Edwards said restoring power to the Lake Charles area will be a “long and difficult process.” The number of power outages statewide was at 368,000 as of Sunday afternoon, down from around 600,000, though there’s no telling when all will receive power again.

Dozens of water systems were also damaged by the storm, including some that won’t come back to life until power is restored.

The death toll from Laura is currently at 14, including eight who have died from carbon monoxide linked to generators.

While much of the relief effort has centered on Lake Charles, numerous small towns in Allen, Beauregard, Calcasieu, Cameron, Jefferson Davis and Vernon parishes are also feeling the devastating effects of the storm. Trees were tossed down, power lines were thrown across streets, and houses were flattened as Hurricane Laura swept through the state.

Those six parishes were recently approved for FEMA Individual Assistance (IA) and Debris Removal, with requests pending for an additional 17 parishes, Edwards said Sunday. And while federal assistance was on its way, local help was already in the affected parishes shortly after the storm passed, with first responders across Louisiana responding to the call.

There are around 20 LPSO deputies currently assisting in Allen Parish, while another dozen were sent to Calcasieu Parish. Deputies have done whatever is needed, and they’ll be there “as long as necessary,” according to Livingston Parish Sheriff Jason Ard.

“If they need us to cut trees down, that’s what we’ll do,” Ard said last week. “We’ve been here and done that and know what it’s like to need that help. So we’re going to be prepared to do whatever we need to do. If they need more, we’ll do more.”

Ard traveled to those areas this weekend to see the damage first-hand. When he agreed to send deputies, he recalled the Great Flood of 2016, when first responders from across the state and country came to Livingston Parish to assist in the storm’s aftermath.

In a social media post, Ard said “we are honored” to assist the southwest portion of the state following Laura, knowing from experience the morale boost it can give to those affected.

“We’ve been in a situation like this before,” Ard said. “We know that having the presence of more law enforcement officers helps everyone from local officials to residents to law enforcement. We are honored to be able to step in with helping hands during these critical times.”

Similar comments were made by Rizzuto and other LPSO deputies on Saturday, when a reporter from The News joined them as they made the rounds through Allen Parish. Though much had been cleared by Saturday, many effects of the storm could still be plainly seen in and around Oberlin.

Long lines of cars stretched from gas stations, where people waited to fill their plastic gas tanks for their generators. Workers were busy repairing buildings or power lines that had been damaged during the storm. Branches were pushed to the side of secluded roads for traffic to pass. Many trees remained slanted from the winds and tornadoes.

“Those trees will be slanted forever now,” Rizzuto said as he navigated through a wooded area of Oberlin.

LPSO deputies left town last Thursday morning to make the 160-mile drive to Oberlin in response to a request from Allen Parish Sheriff Doug Hebert, who needed extra patrol vehicles given the number of residences and businesses without power and the “limited manpower” he had to spare.

With nearly the entire parish out of power, LPSO deputies slept in the detention center on their first night. With no running water, they were unable to take a shower or even use the restroom, and some were wearing the same clothes they arrived in. This after working as much as 16 hours a day.

But that didn’t change the minds of any of the LPSO deputies who volunteered for the task, said Captain Charlie Roberts, recalling the help they received in August 2016.

“People came from across the country to help us when we needed it,” Roberts said. “That’s why we volunteered for this. Law enforcement is a brotherhood, and we’re always gonna help each other in times like this.”

The deputies were originally slated to stay for five days, but that is likely to change in the rapidly evolving situation. So far, they’ve spent their time completing a variety of tasks, such as cutting up and hauling downed trees, purchasing supplies for victims, making deliveries and passing out food, protecting workers trying to restore power, and patrolling the debris-filled streets.

The Sheriff’s Office has posted photos of what deputies are doing on their social media pages, with many more likely to come as deputies prepare to remain in Allen Parish as long as necessary.

Smith recalled people waving at them from the streets as the convoy of LPSO units rolled into Oberlin, a sight that “brought chills” to him as he passed. Roberts recalled the appreciation people showed when they received the smallest of items, such as a bottle of water or a snack.

Rizzuto recalled just listening to a family as the stress overwhelmed them, knowing first-hand that listening can be more helpful than talking in those situations.

“Sometimes, people just need you to listen,” he said. “Sometimes, they just need a shoulder to cry on, and you have to let them.”

On Saturday, Rizzuto, Smith, and Deputy Trey Roberts made a return visit to a small trailer park community in Pitkin, about a 40-minute drive north of Oberlin. Two of the trailers were smashed in the early morning hours when the storm hit, with one woman saying she and her husband had barely escaped before a tree came crashing down on their home.

“Thank God we left when we did,” the woman said.

LPSO deputies later teamed with the Allen Parish Sheriff’s Office and Tractor Supply to purchase a generator for the family, who had no other way to keep a loved one’s necessary medication refrigerated.

But even before the family received the much-needed gift, Rizzuto said he was touched by the happiness the family showed in the midst of everything that they had been through.

“These people have lost everything, and they’re just smiling,” Rizzuto said. “That’s what this is about.”

2020 was a year no one will soon forget, and the stories were just as memorable.