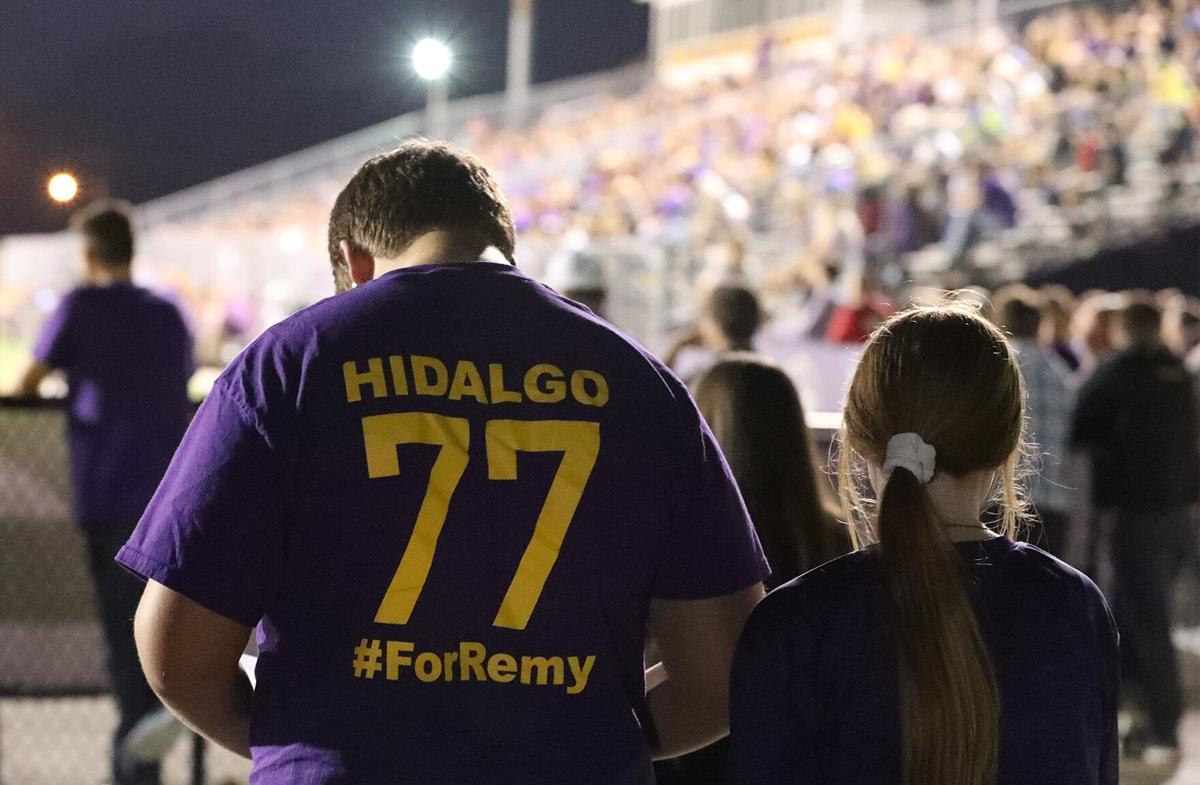 People bow their heads in prayer at the start of a Celebration of Life service for Remy Hidalgo on Saturday, Sept. 26, 2020. 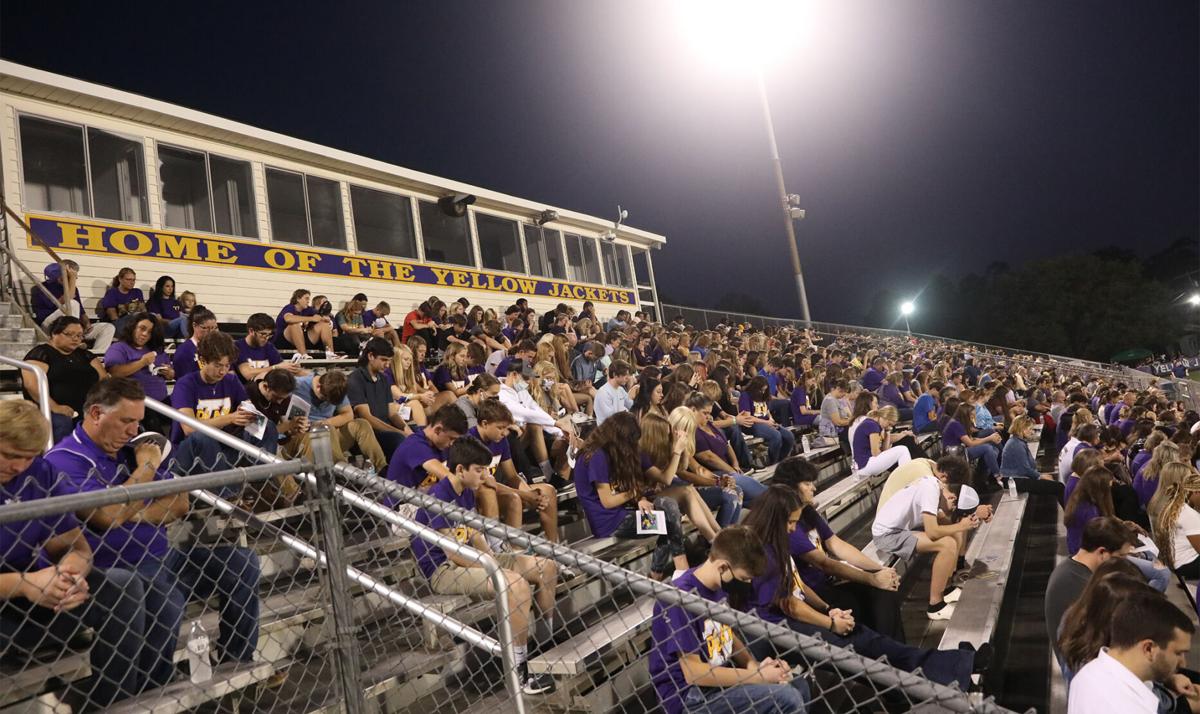 People bow their heads in prayer at the start of a Celebration of Life service for Remy Hidalgo on Saturday, Sept. 26, 2020.

Remy Hidalgo's No. 77 was retired during a celebration of his life Saturday and is now painted on either side of the Denham Springs logo on the turf at Yellow Jacket Stadium. 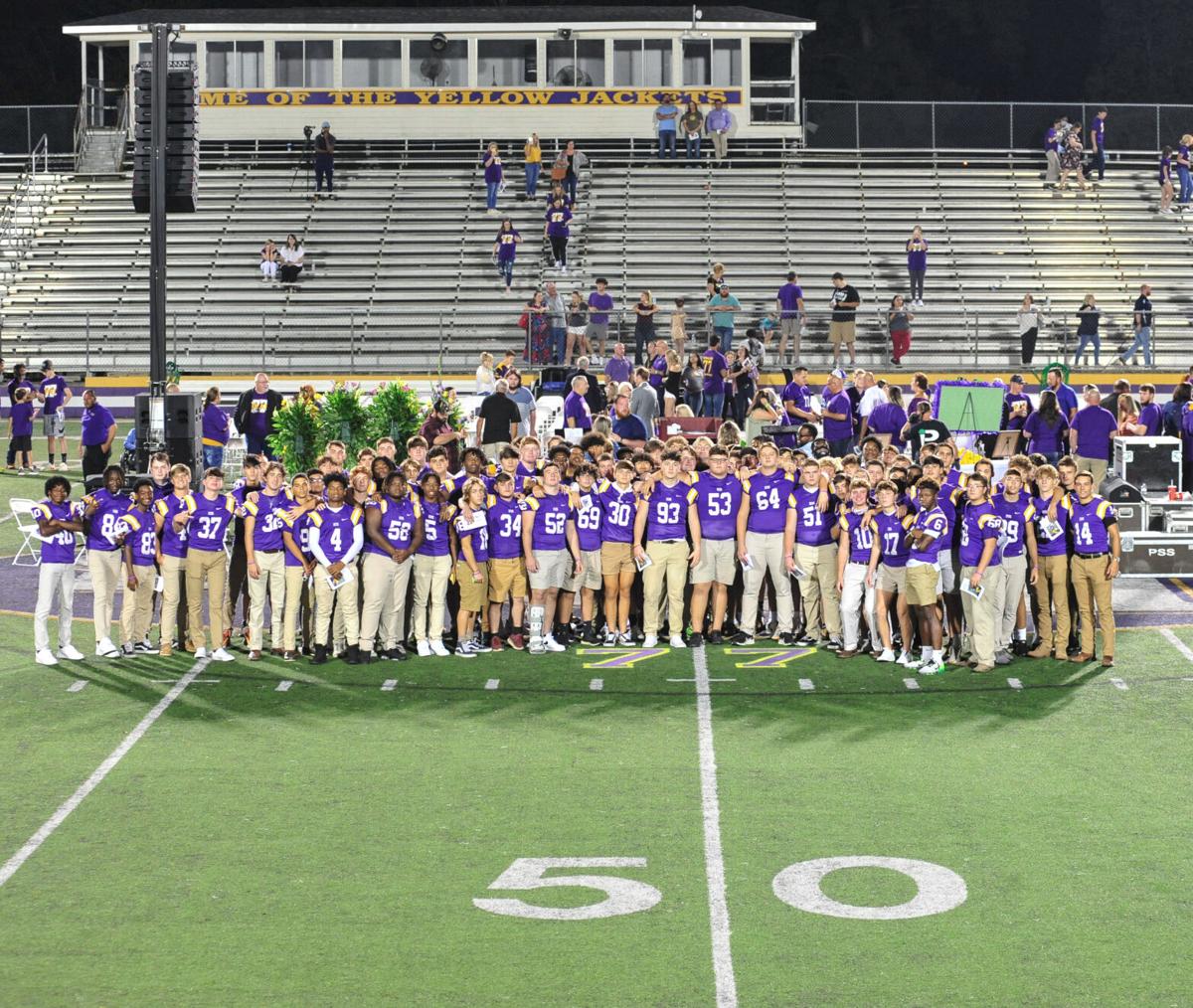 The Denham Springs High football team stands near the No. 77 painted on the turf at midfield at Yellow Jacket Stadium in honor of Remy Hidalgo. The school also retired No. 77 in his honor.

No, he’s not physically with his teammates and classmates, but hearing from those who knew him best, he’ll always be with any one he ever met – and even those he didn’t.

Hidalgo, the Denham Springs High football player who passed away Sept. 18 after suffering a heat stroke at practice earlier that week, was remembered during a celebration of his life at Yellow Jacket Stadium on Saturday.

During the ceremony, the Dads of Denham group announced his No. 77 will be retired and the number also now painted on either side of the Denham Springs logo at midfield on the football field. The group also presented his family with all of Hidalgo’s framed game jerseys.

The tears flowed freely, but there were also some laughs. There was 77 seconds of silence before Hidalgo’s teammates released purple and gold balloons to end the ceremony.

Programs handed out for the service included Hidalgo’s birth date along with that of his death: May 24, 2004 – Sept. 18, 2020, and DSHS football coach Brett Beard said Hidalgo made the most of that time.

“If you go back to that little dash, whether it be a short stint on this planet or whether it be a long stint on this planet, that dash size doesn’t change,” he said. “It’s what you get when you start unraveling that dash, and you listen to all these things that have been said about this young man, so I’m going to leave you with a challenge that he’s all challenged us with … We can all be better, and that little dash has to have so much more of a meaning for all of us. I just keep coming to grips with the idea of you know what? Remy had to go home because the world needed to know Remy, and not just Denham Springs.”

“Every game will be for you, Remy,” she said. “At a young age, being one of Remy’s friends, you could always see how much he cared for everyone no matter what. He never left anyone out. He made sure that they felt welcomed.”

“I could say a million more things about Remy and how happy he made me and how he changed my life for the better, but that will take a lifetime,” Wallace continued.

“… He looked at me, gave me a big hug and said ‘I’m going to make sure this place feels just like home’, and that is something that he did,” Venegas said. “We would hang out every weekend, go to truck meets, and at every single one of those truck meets, Remy knew every single (person). That was just the type of person Remy was – very social.”

“I’m glad I got the chance to meet Remy, because he gave me a second family,” Venegas continued while recognizing Hidalgo’s family.

Venegas shared a fitting story about Hidalgo, an offensive lineman on the DSHS football team, and also recognized his selflessness.

“I remember one time we were laying on his bed, and he rolled over to me and said, ‘Thomas, if I pass away doing something I love, please don’t be upset or cry, because I was doing what I love', and boy did Remy love football,” Venegas said. “He was the most hard-working person I knew. He hated to see somebody better than him, so he pushed himself to be the best person he could be in the weight room and on the field.

“Remy would always put other people before himself and make sure everybody was OK no matter what he was doing,” Venegas continued. “He loved his friends, his family, with everything he had. He would always talk up a storm about how happy he is to have the people he has in his life.”

Teammate Ethan Foster said Hidalgo welcomed him when he moved to Denham Springs in the sixth grade and recalled his love of trucks and selflessness.

“Remy stood out in a crowd, not because he was a real-life giant, but because you could feel the attitude in the air when you entered the room,” he said. “Never have I ever seen Remy be disrespectful, hateful or rude towards anyone. He put everyone on a pedestal and gave everyone the tender love and care they may have been missing.”

Teammate Hayden Rushing said that’s something he’ll take away from his friendship with Hidalgo.

“Our last conversation was right before practice,” he said. “I wish I could have told him then that I loved him. We have so many unfinished conversations and so many jokes that haven’t been made. Remy inspired me to be a better brother, a better friend and simply a better person. Everything I do will be to honor Remy.”

Classmate Gabby Wall ran off a list of things she’d miss about Hidalgo, frequently drawing laughter from the crowd.

“I’m going to miss standing in long lunch lines every single day for you just so you can have two plates of food and two chocolate milks because you swore up and down the school didn’t give enough food and the milk cartons didn’t have enough milk,” she said while laughing through tears.

Teammate Hunter Rushing recalled meeting Hidalgo for the first time in eighth grade during one of their first football practices as high school players, with Hidalgo telling jokes about his new teammates’ mothers. Rushing said he came back with a joke about Hidalgo’s mom which was met with a different reaction.

“He swore up and down that he didn’t have a mom, and I felt so bad,” Rushing said as the crowd laughed. “For the next six months, if somebody would have said something about Remy’s mom, I’d be right there by his side. Then one day, I after practice, I saw Mrs. Ashley (Roberson, Hidalgo’s mother), pick Remy up, and I looked at him. He looked at me. He forgot about that whole thing, but I just laughed so hard. And then from the first day that me and Remy met, we grew closer and closer and quickly became best friends. Remy honestly was the best person, the best friend and the best teammate that anyone could ever ask for.”

Hidalgo’s sister, Bailey Hidalgo, told of what he was like as a brother.

“Remy was a little baby that my mom and dad let me be the first to hold,” she said. “He was the sole playmate for a little girl who had trouble making friends. A few years ago, Remy took dance lessons with me because I didn’t have a partner. I don’t think he was excited about that.

“Whenever I moved away for college, we both downloaded walkie talkie apps so that whenever we talked, it would feel as if we were only one room away from each other,” she continued. “He was also the giant kid that would wear the spandex Spider-Man costume just because it would make (Hidalgo’s brother) Tucker happy. He would spend hours doing whatever that little 4-year-old asked him to do. Remy was never too grown to play with little Tucker.”

“I thought he was lost,” Howard said. “He’s too big to be a sixth-grader.”

Howard said he got to know Hidalgo in limited moments – hallways, football games, recess and lunch.

“He was always smiling,” Howard said. “He never really had a bad day, I don’t think. I was jealous of him for that. I never saw him angry, and he was always friendly to others. I think the only aggressive bone in his body would be against those poor young men that stand opposite him in game day.”

Howard also recalled his last words with Hidalgo and the impact they’ll have on him. He said Hidalgo was by snack machine with some friends during a class exchange.

“I asked him like I do every student at the snack machine, ‘Hey guys, what’s good in there?,” Howard said. “Don’t really mean anything about it. It’s just a conversation starter. Some people say they love the beef jerky. Other people like the veggie straws. Popcorn’s popular. I don’t think anybody likes the Nutri-Grain bars, but Remy said something that’ll mean more to me now than it did at the time.

“It’s all good, Mr. Howard,” Howard continued. “I had a good laugh at the time, patted his back and went on my way. It’s all good. That was Remy. It’s all good. I was blessed to have known him. He was a gift from God, and I pray that I can live my life in a way that honors him and his memory until my dying days, and I hope that it’s good enough that I can meet him again one day and I can ask him, ‘What’s good up here?’ and he’ll be able to tell me, ‘It’s all good.’”

2020 was a year no one will soon forget, and the stories were just as memorable.