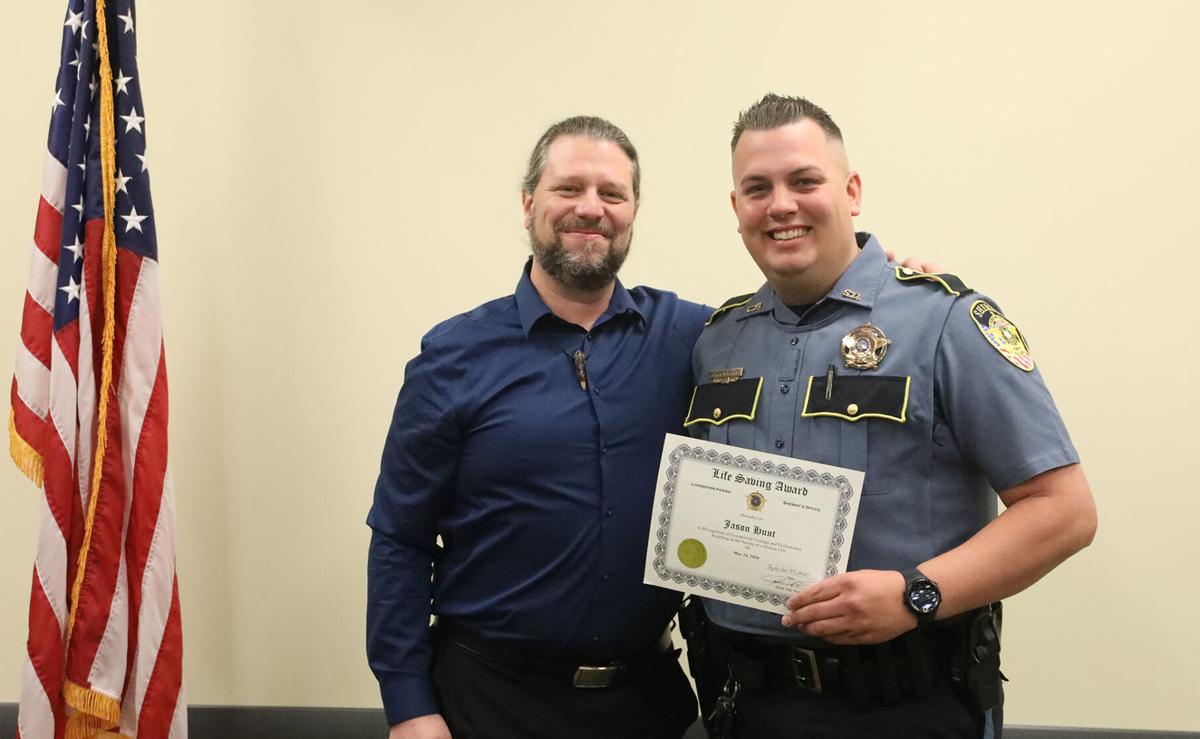 Pictured, from left, are Jason Harris of Denham Springs and Deputy Jason Hunt of the Livingston Parish Sheriff’s Office. Hunt was recently recognized for saving Harris’ wife from a burning car on May 24, 2020. 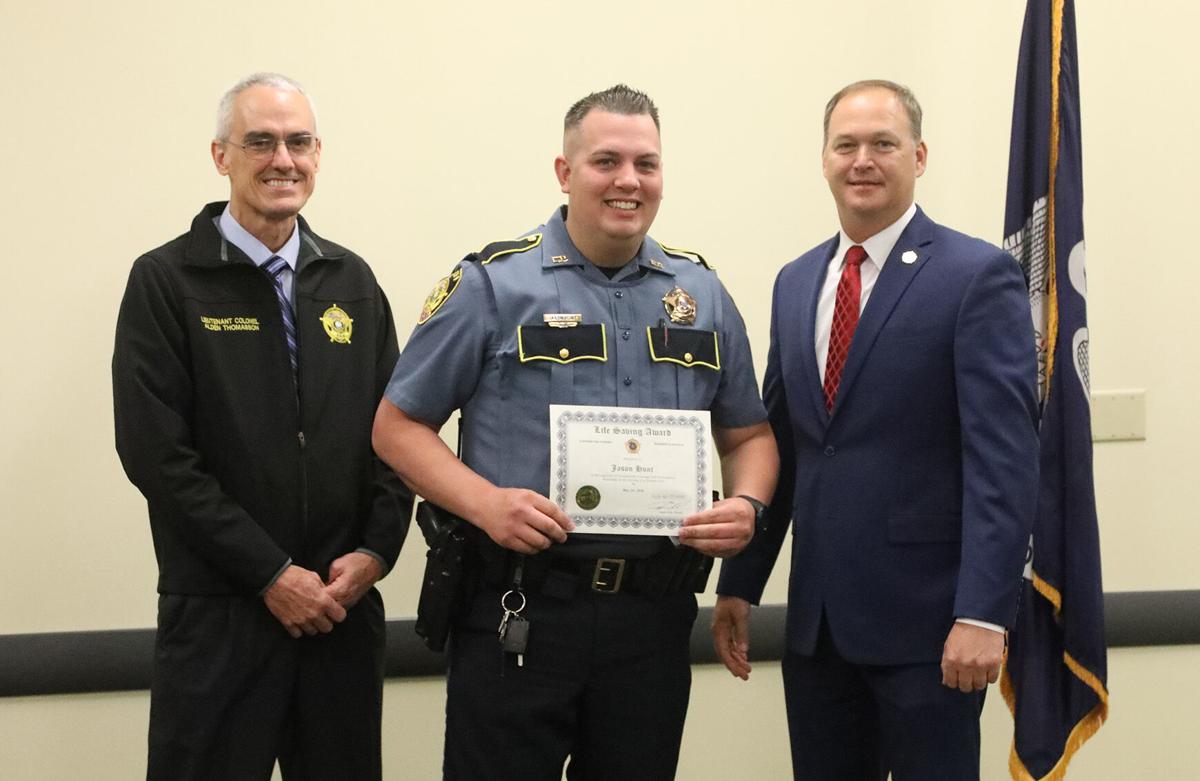 Pictured, from left, are Lt. Col. Alden Thomasson, Deputy Jason Hunt, and Sheriff Jason Ard, all of the Livingston Parish Sheriff’s Office. Hunt was recently recognized for saving Harris’ wife from a burning car on May 24, 2020. 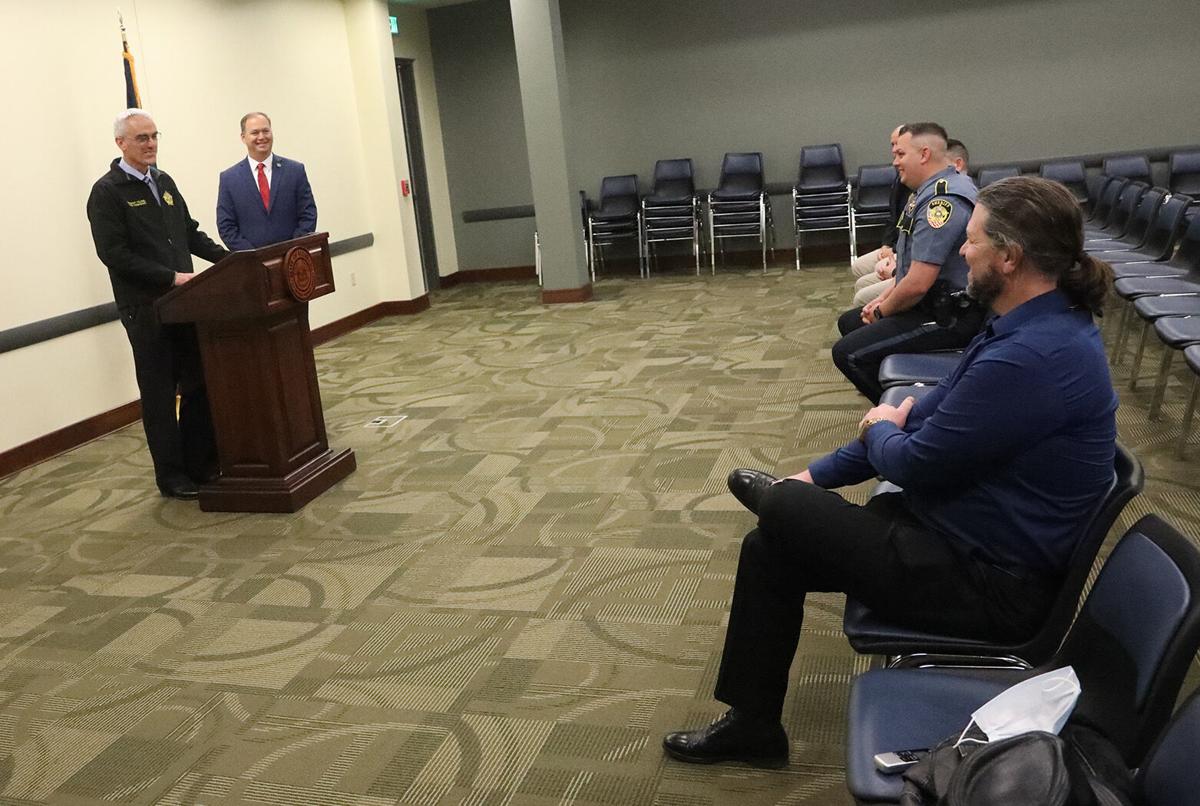 Lt. Col. Alden Thomasson, standing left, and Sheriff Jason Ard, both of the Livingston Parish Sheriff’s Office get ready to present a departmental award to Deputy Jason Hunt, who was recognized for saving a woman from a burning car on May 24, 2020. 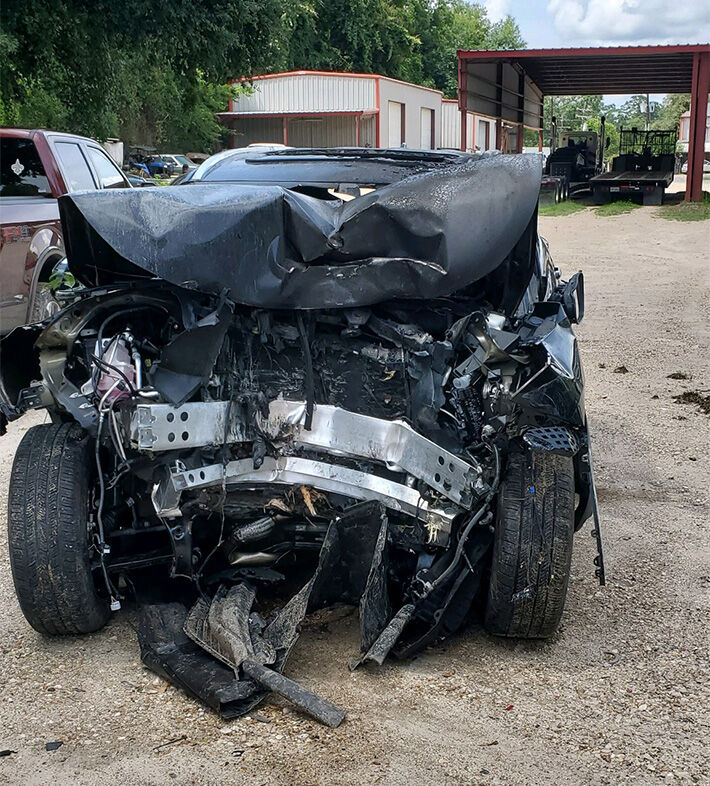 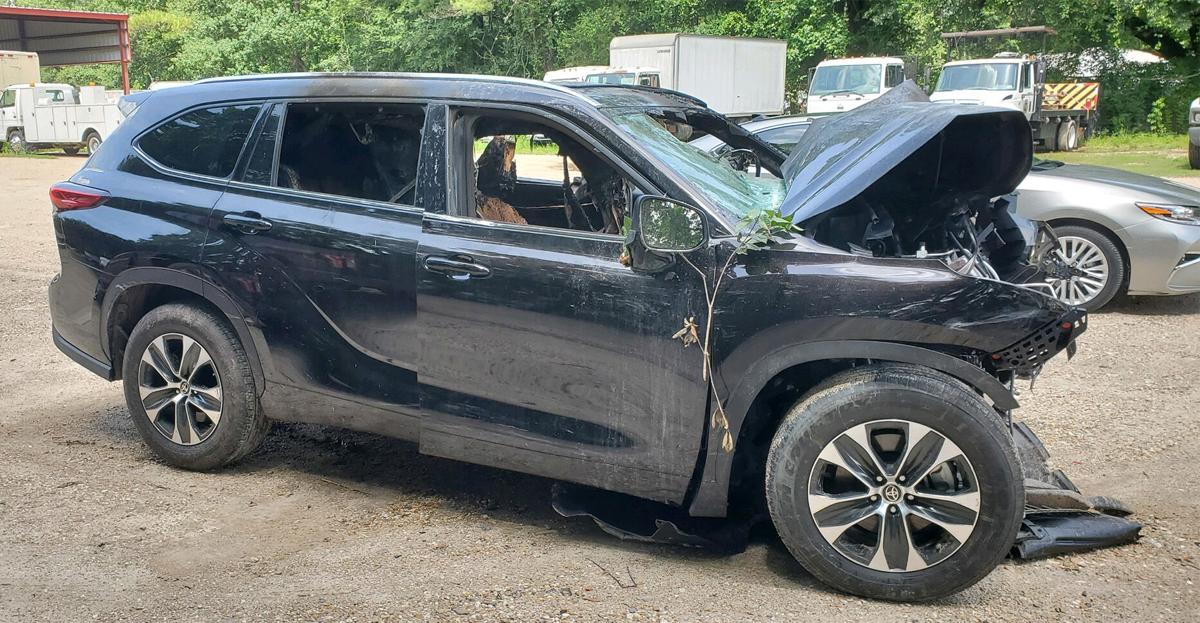 Pictured, from left, are Jason Harris of Denham Springs and Deputy Jason Hunt of the Livingston Parish Sheriff’s Office. Hunt was recently recognized for saving Harris’ wife from a burning car on May 24, 2020.

Lt. Col. Alden Thomasson, standing left, and Sheriff Jason Ard, both of the Livingston Parish Sheriff’s Office get ready to present a departmental award to Deputy Jason Hunt, who was recognized for saving a woman from a burning car on May 24, 2020.

LIVINGSTON -- In the early morning hours of May 24, 2020, Deputy Jason Hunt pulled up to a car that was engulfed in flames.

Not knowing when — or if — help would arrive, Hunt faced the same question nearly all first responders encounter at some point in their careers: Fight or flight?

He chose to fight.

Over the next five minutes — which “felt like an eternity” — Hunt battled scorching flames, choking smoke, and much uncertainty as he struggled to get inside the vehicle. Eventually, he was able to save the life of a Denham Springs woman who likely would have perished in the car flames fully consumed moments after Hunt pulled her to safety.

Some of the details are a little fuzzy nearly a year later, but Hunt hasn’t forgotten the fear of that night — nor the family’s gratitude in the aftermath.

“Never in my career have I been in a situation like this,” Hunt said. “It was pretty intense. It still chokes me up to remember it.”

Hunt, a 10-year veteran of the Livingston Parish Sheriff’s Office, was officially recognized for his life-saving actions during a ceremony on Friday, March 19.

Sheriff Jason Ard and Lt. Col. Alden Thomasson presented the award to Hunt, who is one of the department’s D.A.R.E. officers. Also attending the ceremony was Jason Harris, the husband of the woman Hunt rescued from the fire.

During the ceremony, Thomasson read a brief report of the incident, beginning with Hunt driving up to the scene through the moment he pulled the driver out of the fiery wreckage.

“Sometimes the right person is in the right place at the right time and in this case, Deputy Hunt did exactly as expected and his decisive actions saved a human life,” Thomasson read. “Deputy Hunt’s action reflects great credit upon himself, law enforcement officers and the Livingston Parish Sheriff’s Office.”

Ard credited Hunt for staying focused in a frightening situation.

“We train hard everyday for situations that we don’t know what we’re gonna be in … but when we are, we revert back to our training and what we do,” Ard said.

Attendees were able to watch a video recording of the incident taken by a camera on Hunt’s patrol unit. It was the first time Harris had seen footage of the scene, and it was a harrowing reminder of how close he came to losing his wife.

“Because you were in the right place at the right time, I’m here instead of standing over my wife’s graveside,” Harris said to Hunt.

If it hadn’t rained that night, Hunt isn’t sure he would’ve been around to rescue Missy Harris from the burning car.

“My unit was leaking water through the roof because it had rained bad that day,” he recalled. “I tried changing units and wound up being an hour over on my neighborhood patrol than I was supposed to be. So if I hadn’t been an hour late, I never would’ve been there.”

A dispatch of a wreck came in as Hunt was leaving the Juban Parc subdivision in Denham Springs. Though his shift was long over, Hunt decided to go to the scene and stay there until another patrolled deputy arrived.

“I was the closest person there,” he said.

As he pulled up, Hunt saw the flames and rising smoke. He then ran to the vehicle.

“I didn’t know if people were in the vehicle at the beginning, but then I heard three moans,” Hunt said. “That’s when I knew I had to go into action.”

A video from Hunt’s patrol unit captured the entire scene. In the video, Hunt is seen approaching the vehicle, knocking on a window, and unsuccessfully pulling on multiple handles. After trying to break a window with his sidearm, the video shows Hunt running back to his patrol unit, grabbing a fire extinguisher, and hurrying back to the burning vehicle to put out the flames.

He used up the entire canister in barely a minute, briefly getting the fire under control. He then used the empty extinguisher to bust open the back window, which only fed more oxygen to the fire.

“There was definitely a panic at that point,” Hunt said.

Scrambling, Hunt noticed a neighbor standing nearby and shouted at him “to throw me anything.” The neighbor quickly threw Hunt a claw hammer, which he used to pry out the driver window as the fire roared out of control.

Using the hammer, he then ripped the airbag out of the way to get to the unconscious Missy, who was laid over the center console. Able to get his hands on her, Hunt used “all my might” to pull her out of the car before both fell over onto the grass.

Video footage shows two other LPSO deputies arriving less than a minute after Hunt pulled the woman to safety. As they fought the flames, Hunt performed multiple sternum rubs on Missy, who remained unconscious.

Eventually, other first responders arrived, and Acadian Ambulance transported Missy to Our Lady of the Lake in Baton Rouge. Once Hunt saw Missy placed in the ambulance, the gravity of the situation finally hit him. Drenched in sweat, Hunt said his body “gave out.”

After turning in for the night, Harris received a phone call no spouse ever wants to get.

“The person said, ‘Your wife has been involved in a traffic incident and is being taken to the hospital,’” he recalled. “At this point, my mind’s racing.”

The caller assured Harris his wife “was stable” but that she sustained significant injuries after her car struck a pine tree and erupted in flames from the engine less than a mile from their home. Harris saw the charred remains of the vehicle the next day and was in disbelief.

“If you look at it, you say to yourself, ‘There is no way in the world somebody survived that,’” he said.

Besides the burns from the fire, Missy sustained a concussion, a broken collarbone, bleeding to her brain, and a shattered ankle, her husband said. She remained in the ICU for about four days and was released from the hospital after about a week, though she endured a lengthy rehabilitation process for her reconstructed ankle.

Hunt, who was also brought to the hospital that night but released after a few hours, said all he noticed were the burn marks on Missy’s skin.

“The fire was so hot that the plastic in the car was popping on her arms,” Hunt recalled. “That’s the only thing I noticed. I just saw her poor skin covered in little pop marks.”

Though he was physically and emotionally drained, Hunt had trouble sleeping after returning from the hospital. For the entire night, he couldn’t get the woman he had saved out of his mind.

Hunt eventually reached out to Harris and asked if he could meet Missy when she returned home. Harris agreed and contacted Hunt when they were ready for the visit.

Missy, who was using a knee scooter, immediately made her way across the room when Hunt walked into the house. She then fell in his arms, a moment Hunt said he’ll “never forget.”

“I have never been hugged by a human being like that,” Hunt said, choking up at the memory. “It was just a very emotional time to finally be able to meet eyes with the person. To be hugged like that, that’s powerful.”

Hunt ended up visiting with the family for more than two hours that night. By coincidence, it was revealed that Hunt had served as the D.A.R.E. officer for Harris’ school-age children.

“As soon as he walked in, my sons just yelled, ‘Deputy Hunt!’” Harris said.

Missy has since recovered from the accident and returned to work around the New Year, Harris said.

Hunt and the family have stayed in touch since, exchanging texts over holidays and checking in on one another regularly. Recently, Hunt was making a patrol when he spotted Harris and his sons playing basketball. They ended up chatting for close to an hour.

Added Harris: “There’s a special connection we have with Jason now.”

That is a hero.