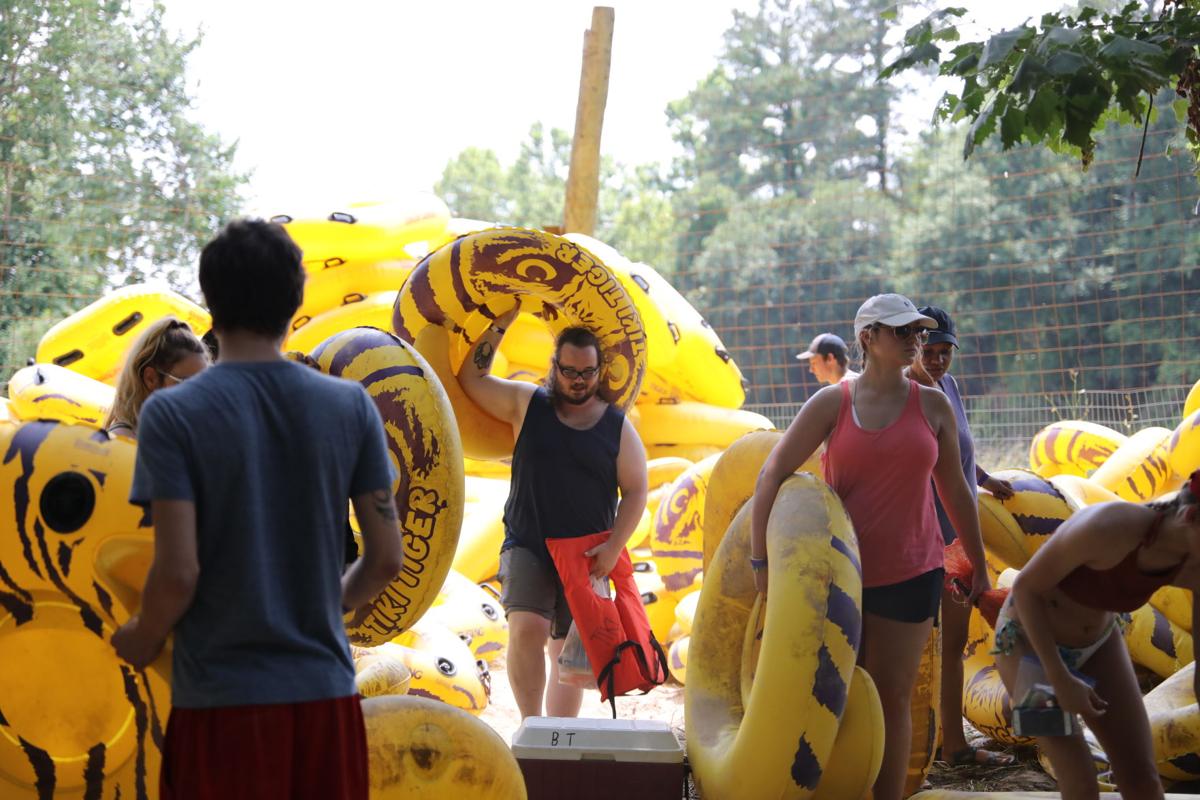 Tubers dig through the pile of tubes waiting for them at the launch, picking out the best one. 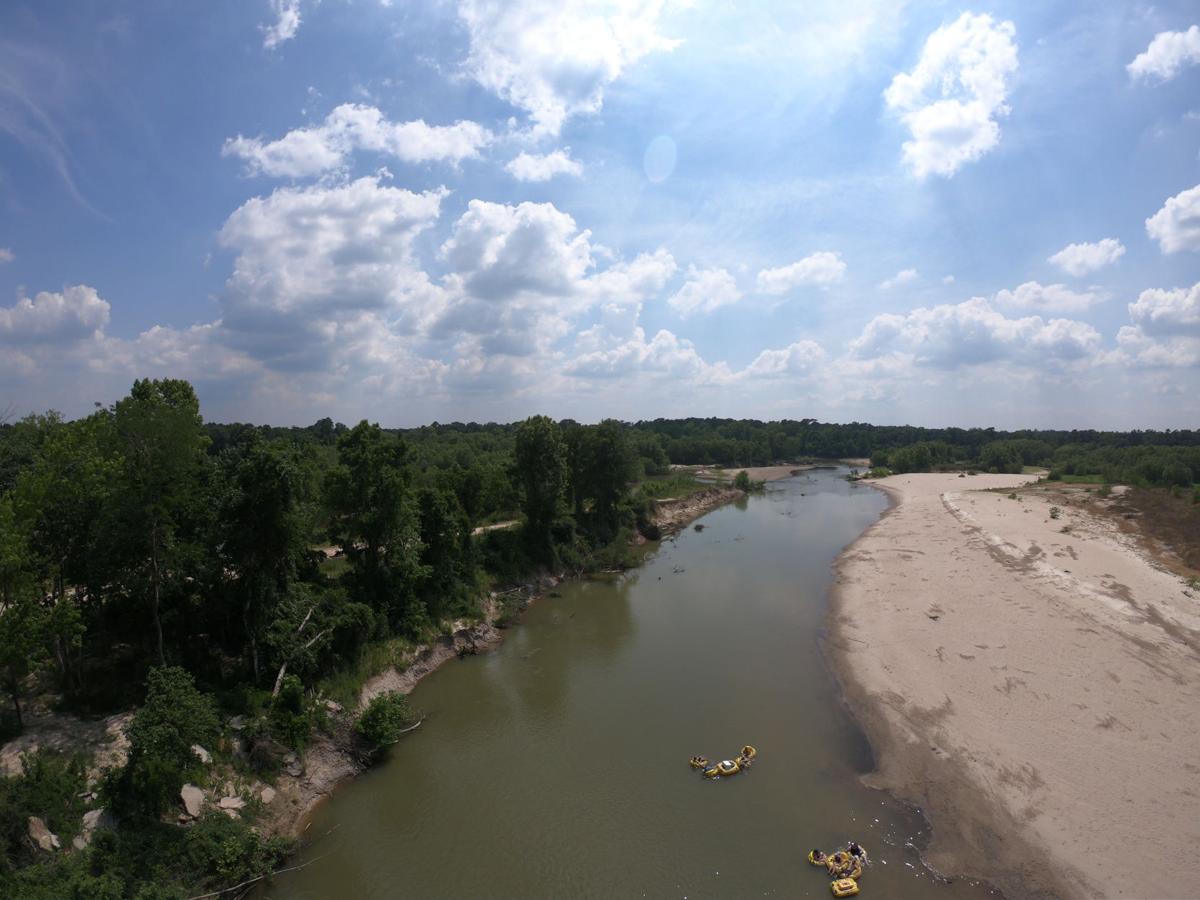 With Phase 1 of the economic reopening in Louisiana underway, Tiki Tubing has opened for the 2020 season beginning in tandem with Memorial Day weekend. According to owners Patricia and John Fore, the first tubes launched Friday, May 22 at 8 a.m.

While rain is expected as part of the weekend forecast, temperatures will remain hot through next week.

Tiki Tubing now has a $25 "Express Cash Line," wherein floaters can fill out their release form online and turn it in upon arrival, along with cash payment, to skip the check-in and head straight for the bus. The $25 payment includes tax, and the form must be filled out correctly for admission.

During the time of COVID-19, and the spread of the novel coronavirus, Tiki Tubing has stated per state guidelines that individuals must have a mask to ride on the bus to the boat launch. If you do not have a mask, one can be purchased for $1.

Tiki Tubing also invites individuals to like, comment, and tag three friends on their Facebook page posts to enter to win a chance for a one-day free pass. Customers can find their Facebook page by tapping here ----> https://www.facebook.com/tikitubing

Read all about the battle Patricia and John Fore went through to reopen after the Great Flood below.

As the summer time heat descends upon Louisiana, the gates to Tiki Tubing open for guests to spend a relaxing day in, or floating on top of, the cool waters of the Amite River.

However, Patricia and John Fore – owners of the nautical get-away – had to survive a bout with the very river they used for their business, which in 2016 rose up and consumed all the land, equipment, and buildings that helped Tiki Tubing operate.

“We lost everything in the flood,” Patricia Fore recalled, “even the trucks and trailers that carried the people and their tubes were dragged down river.”

Some of those demolished trailers can still be seen on the campus, which stretches roughly four miles along the coast of the Amite River. But, like the river which had given them so much – and taken a lot away – the Fore’s stayed persistent, opting to rebuild Tiki Tubing one step at a time; beginning with a fresh home base about one mile downriver.

“Everything here is new construction, from the concession and check-in hut to the waiting station (to board the buses),” Patricia said. “And we’re adding more-and-more each week.”

Floaters now wait at a small hut to board a bus, which then takes an ‘off-road’ approach to the tubing launch – giving soon-to-be tubers several views of the river from atop a 20-foot bluff, as well as a tour past the old Tiki Tubing home base. And, even if riders aren’t interested in those vistas, the added five minutes to the bus ride translates into direct value for customers.

“The whole course before was anywhere from four hours to eight hours, depending on how fast people decided to go,” Patricia said. “There are sixteen beaches along the way for tubers to stop at.

“Our new location has added at least half an hour to the route, more if they’re taking their time.”

Tubers use a make-shift dock, not far from where the Fore’s used to live on the Amite’s banks, to set afloat. The price for a day on the water is $24 per float, with a small charge for an extra ‘green-labeled’ float that is designed to carry extra equipment – namely, ice chests.

“Please bring your ID,” Patricia said with a smirk. “And no glass, we will confiscate it.”

It’s not far to the first beach, where most people get in their initial photo-shoots before moving down the several mile course. The river’s bluff overlooks the area, where friends and family who aren’t interested in floating get a great view of the river and its delta to the west.

According to Patricia, before the flood Tiki Tubing averaged almost 1,000 tubers per day. Several buses operate in a cycle between the launch dock and home base – with one bus driver starting her 10th run of the day at about 2 p.m.

However, the Fore’s slogged through a tough, slow 2017 season as Patricia recalled most customers were still worried about the condition of the river and surrounding areas. A church group from Mississippi who had just finished the course wandered up to the check-in hut - and put any fears to rest.

“It was great,” the group tried to say at once. “It was calm, with a few fast spots, but it was clean and very enjoyable.

A former resident of Watson was among them and likened the experience to the days when Livingston Parish residents flocked to Thunderbird Beach – an attraction that brought water-lovers all over to an area on the Amite River that was big enough to provide a ‘beach’ feel, and accessible to vehicles.

What she didn’t know was, years before, the Mr. and Mrs. Fore owned Thunderbird Beach.

What she also didn’t know was that Patricia and John Fore intend to bring Thunderbird Beach back in a new, exciting way.

“Right over there,” Patricia said, pointing to a u-shaped ingress of the river which surrounded a circular sand-bar, and was surrounded by a beach. “We’re going to bring in fresh sand, build a stage, construct a bar, paddle-boats, water rides… we’re going to bring that feeling back in a whole new way.”

Patricia didn’t have an exact timeline for the new Thunderbird Beach, but if the new construction throughout the brand new base for Tiki Tubing is any indication, the Fore’s plan is to come back bigger and better than before.