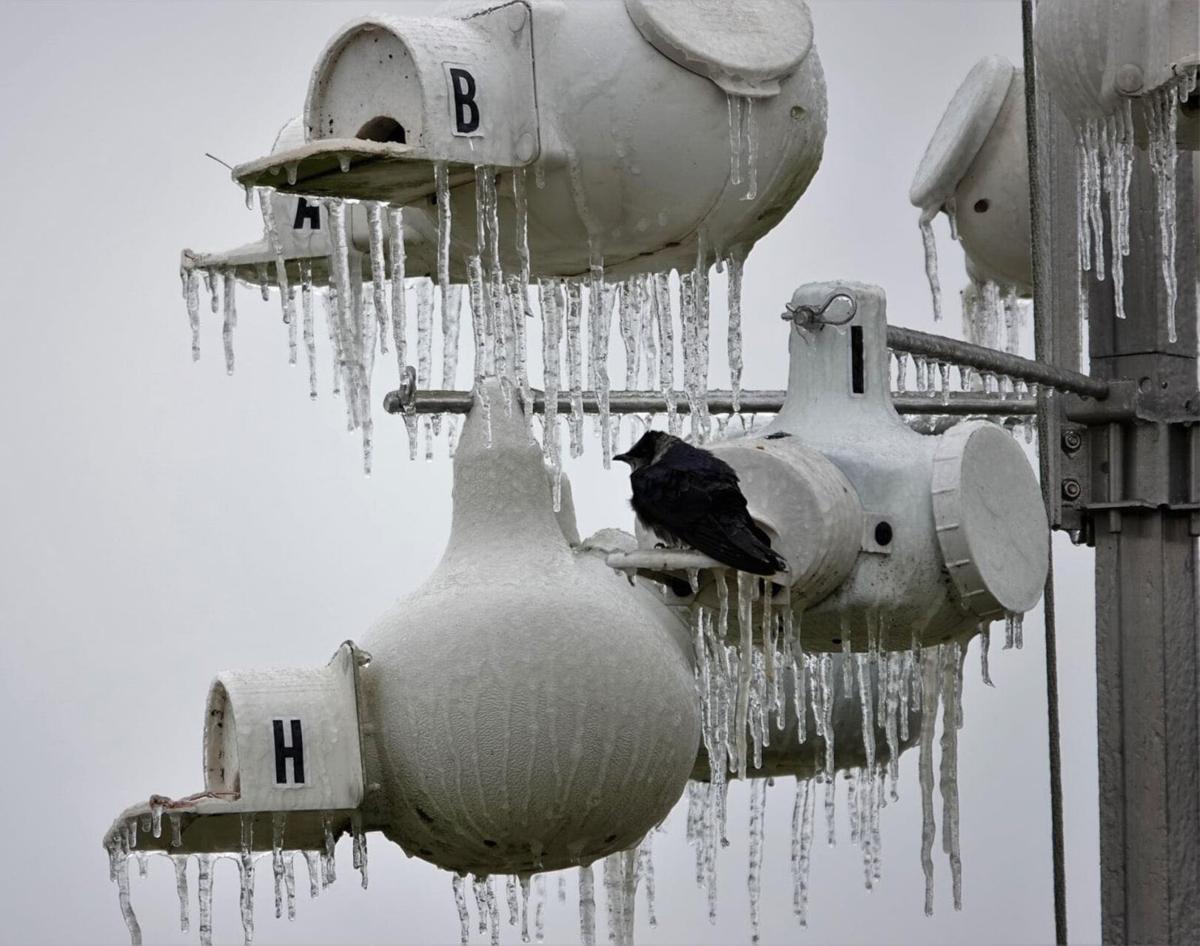 Several Purple Martin gourd racks at North Park in Denham Springs were frozen over after a rare ice storm swept through Louisiana the week of Feb. 15, 2021. 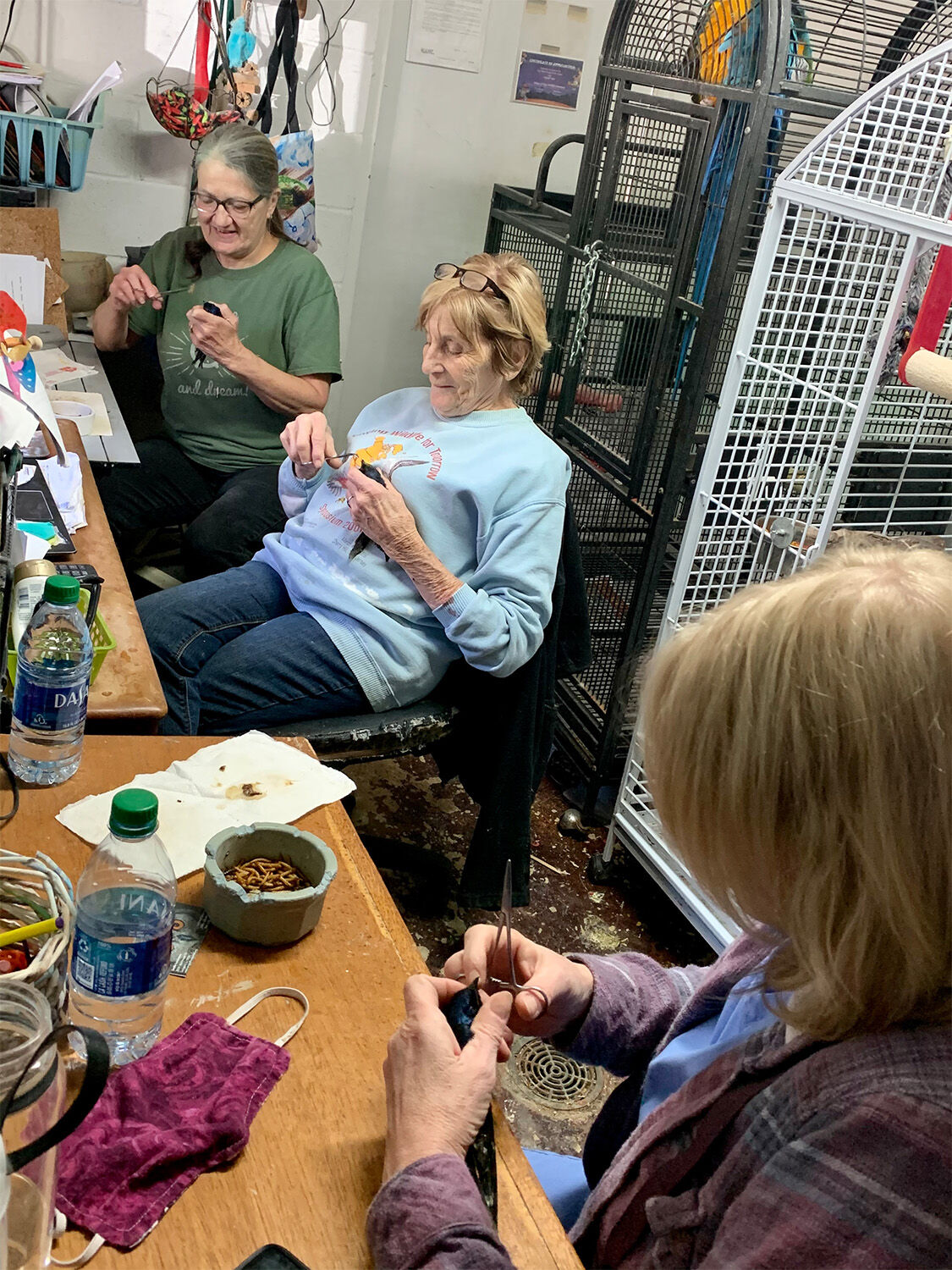 Volunteers nurse Purple Martins back to life after they were saved from a rare ice storm that swept through Louisiana the week of Feb. 15, 2021. 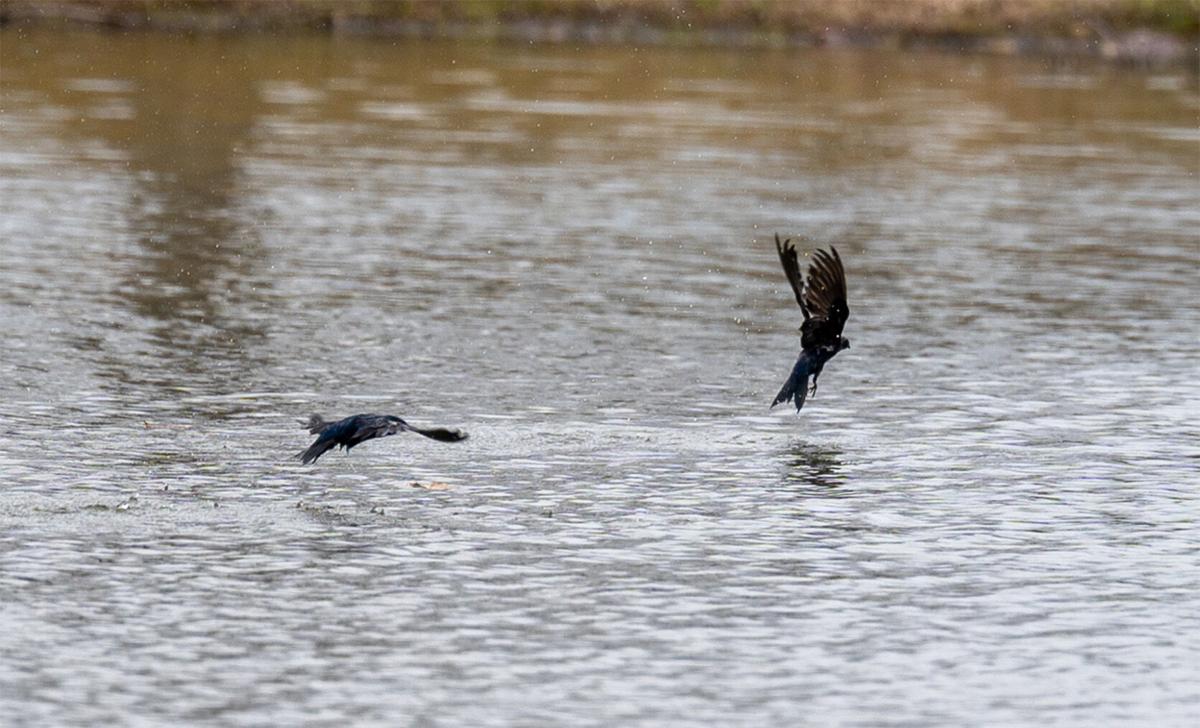 Purple Martins get a sip of water from a pond upon their return to North Park in Denham Springs. The birds were recently saved from a rare ice storm that struck Louisiana the week of Feb. 15, 2021.

DENHAM SPRINGS -- A group of volunteers rescued dozens of birds from the frigid temperatures that gripped the state last week, preventing what would’ve been a “heartbreaking” scenario for Purple Martin lovers.

Krista Adams, a Denham Springs resident and local Purple Martin expert who has set up multiple gourds throughout the city, led the effort with help from her family and several volunteers from two local non-profit organizations.

After Adams and her family saved the birds from their frozen homes, they were nursed back to health at Livingston-based Wings of Hope Wildlife Sanctuary, one of two wildlife care facilities in the metropolitan Baton Rouge area. Volunteers from the Louisiana Master Naturalists of Greater Baton Rouge later assisted in the birds’ recovery.

All told, approximately 46 Purple Martins were saved and ultimately released back into the wild. A few others are still being cared for at Wings of Hope.

“It was a total group effort,” Adams said.

A rare winter storm swept through Louisiana the week of Feb. 15, knocking out power for thousands of people and blanketing much of the state in a combination of ice, sleet, and frozen rain. The frigid temperatures persisted for much of last week, keeping the state frozen for several days.

Shortly after the storm began Monday, Krista and her husband Mike went to the gourd racks set up at North Park to check on the Purple Martins, which started arriving in early January. Once Krista and Mike got to North Park, they ran into an unexpected problem — the gourd poles were completely frozen, something that had never happened before.

“The ice was covering everything,” Mike said. “You couldn’t even unscrew the caps.”

They tried to get the racks down “by pulling on them and hammering on them and chiseling on them,” which only “spooked” the birds, Mike said. Eventually, they used pump sprayers and warm water to thaw the poles in order to lower them and free the birds that were trapped inside the frozen gourds.

Krista took photos capturing some of what she saw, including one of a Purple Martin trapped underneath frozen icicles in the entrance of a gourd. In another gourd, two frozen birds confined another six inside.

“They all probably would’ve died because the ice lingered for a couple of days,” Krista said.

Besides being trapped by the ice, the birds faced starvation. Because Purple Martins are aerial insectivores, they feed by catching insects while in flight. But without insects to feed on during the cold days last week, there was hardly any food for the birds that had already spent the previous few days eating less than normal in migration.

“They can go maybe a day without eating, but three or more days, especially after they just got here from a migration that takes about four or five days, would’ve been terrible,” Krista said.

After taking the birds from the iced-over gourds, Krista contacted Leslie Lattimore of Wings of Hope, a wildlife rehabilitation center that has given care to animals for several years. The birds were eventually brought to the facility off Abe Hoover Road in Livingston, where they’d spend the next few days being tended by a team of volunteers, including some from Louisiana Master Naturalists.

“I don't think [Lattimore] realized we’d be bringing her 60 Purple Martins!” Krista joked in an email.

The care for the Purple Martins was around-the-clock. Krista said it took five people roughly an hour and 15 minutes to feed mealworms to the 60 birds, which need to feed throughout the day. After a 10-minute or so break, the volunteers would start again.

That process lasted from 8 a.m. until 6 p.m. for about five days.

“We were feeding all day,” Krista said. “When we would finish, it was basically time to start over again.”

While Krista was able to save many of her birds, she found out other Purple Martin landlords across the state weren’t so lucky. She said a man from Bunkie reported losing 152 of his adult Purple Martins, while another from West Baton Rouge Parish lost 41.

Since Purple Martins have site fidelity (meaning they return to the same locations every year), the landlords lost birds that had spent decades nurturing.

“Both of these landlords have been hosting Purple Martins in their backyard for 30 plus years!” Krista said in an email. “To lose these birds that have site fidelity... is really heartbreaking.”

Krista said five of her Martins perished before the rescue, while a few remained at Wings of Hope for extra care. Most, however, have since been released back into the wild.

Krista, Mike and their daughters Kristine and Renee returned the birds to their sites on Sunday, first at North Park and then at Live Oak High. The family, a couple of photographers, and other spectators watched with delight as the birds whizzed back and forth in the air or dove for sips of water from the nearby pond.

“It took many volunteers to feed these birds and keep them alive,” Krista said. “It was a total group effort.”

Added Mike: “It was a real Herculean effort.”