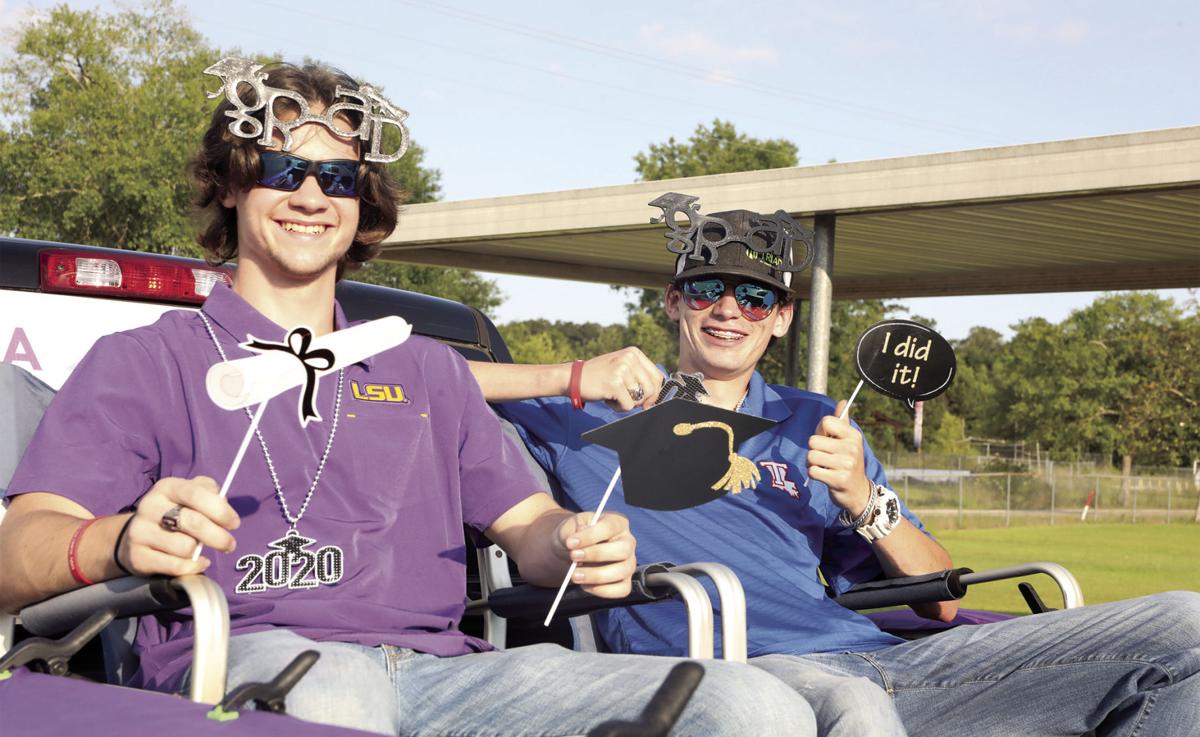 From left, Lane Courtney and Kamron Page take a seat in the back of a truck for a parade celebrating the Holden High Class of 2020 on Tuesday, May 19, 2020. 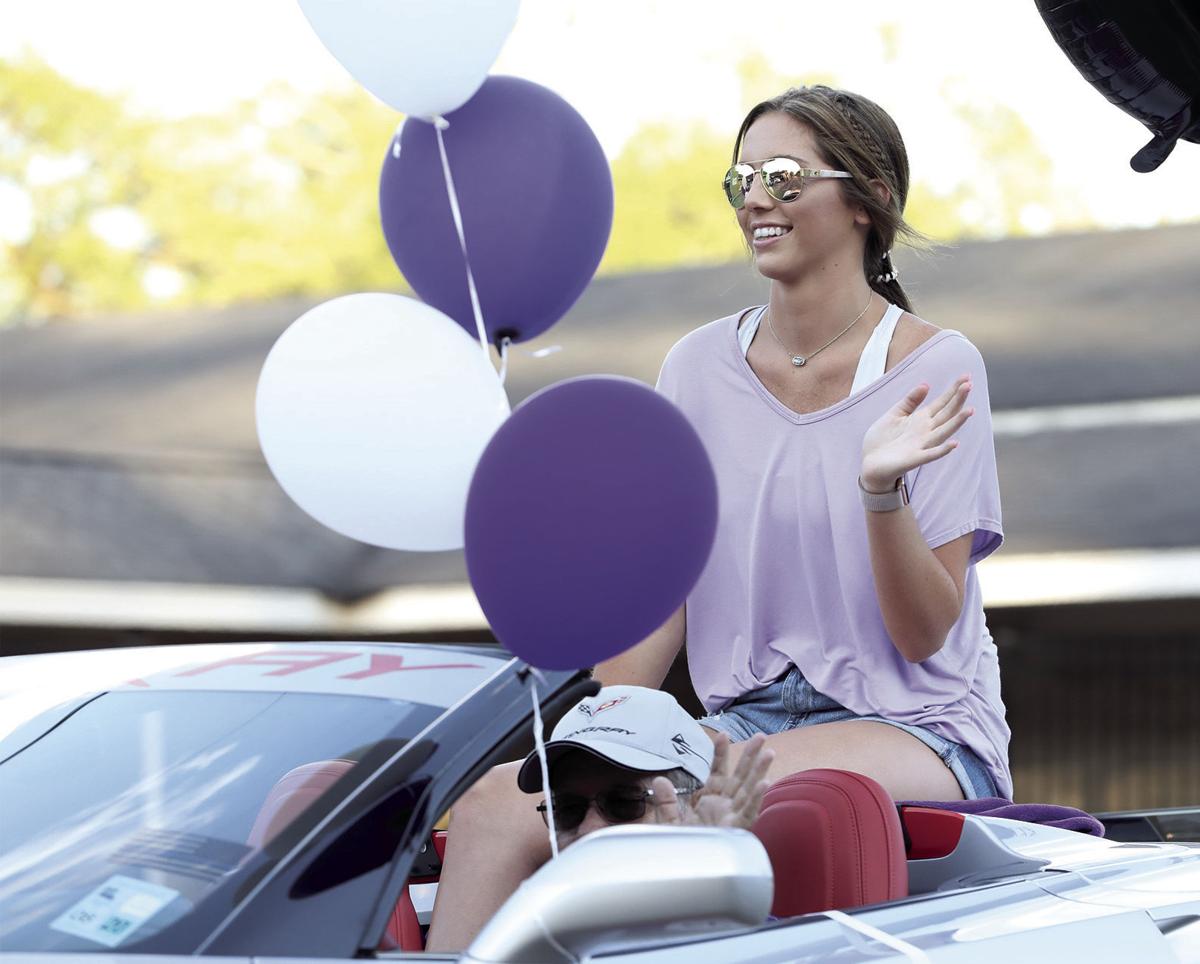 Emma Hutchinson waves at people from atop a convertible during a parade celebrating the Holden High Class of 2020 on Tuesday, May 19, 2020. 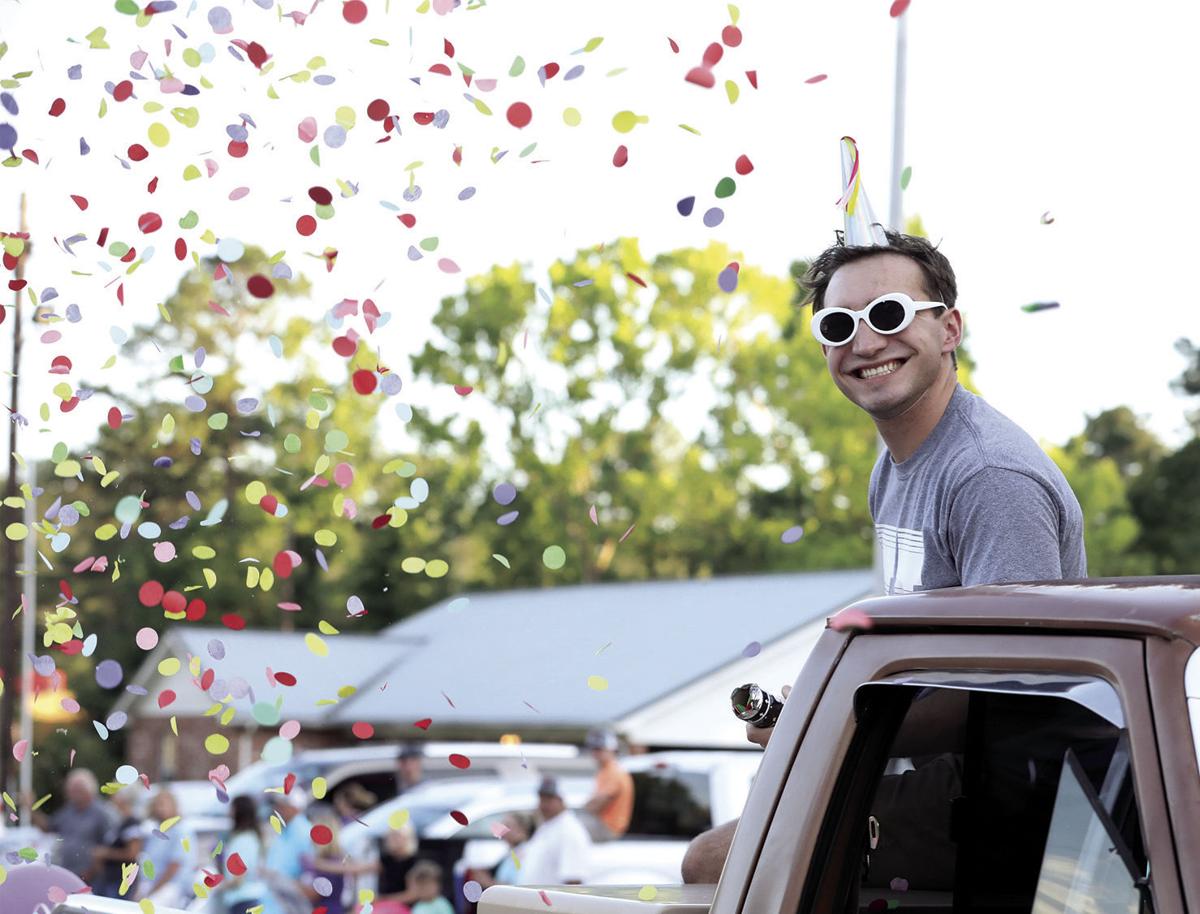 Carter Alphonso smiles after blasting confetti in the air during a parade celebrating the Holden High Class of 2020 on Tuesday, May 19, 2020.

HOLDEN -- Buddies Lane Courtney and Kamron Page sat in the back of the pick-up truck, which was decorated in their honor.

One side of the truck was decked out for Courtney, who wore a purple LSU polo while he kicked back in a fold-out chair in the truck bed. The other side was covered in signs for Page, who wore a blue Louisiana Tech polo while sitting next to Courtney.

They had props, too.

Along with a paper-made diploma, a graduation cap, and a small sign that said, “I did it,” each senior boy wore a necklace and headpiece that represented the Holden High Class of 2020, whose last semester of high school was cut short due to the novel coronavirus pandemic.

But on this sunny evening, there was no talk of quarantine, staying inside, or distance learning. Instead, they were going to relax and enjoy the ride.

“We’re just gonna sit in the truck bed, kick back, and smile and wave at people,” joked Page.

The Holden High Class of 2020 received a “Rocket send-off” when they paraded through the community on Tuesday, May 19.

Originally scheduled for May 14 — the day seniors would’ve had their graduation ceremony if not for the coronavirus — the parade was pushed back five days due to inclement weather last week.

There were no such issues on this picturesque spring evening.

It’s official: Schools are closed for remainder of 2019-20 school year amid coronavirus pandemic

The parade took seniors on one last ride together through the Holden community, giving them a final glimpse of their hometown as high school students. The parade capped off a busy day for the upperclassmen, who also took part in the school’s traditional senior walk through campus in cap and gown as well as the senior breakfast that morning.

Many of the seniors hadn’t been together since March 13, the last day students were allowed in schools before Gov. John Bel Edwards closed all campuses statewide to slow the spread of the novel disease.

The governor later extended the closure through the rest of the 2019-20 school year, which meant high school seniors statewide unknowingly spent their last day together on campus about two months earlier than expected.

“We just wanted to give them something normal,” Principal Kris Rountree said during the senior breakfast. “Plus, we’re a K-12 school, and a lot of us have known these kids since kindergarten. It’s home for them and for us.”

Tracy North, a Holden resident and former substitute at the school, organized the parade for the senior class, saying she felt they deserved “something special” for all they’ve encountered during what has been a trying last semester.

“We just wanted to give them a Rocket send-off,” she said.

Seniors arrived on campus around 6 p.m. and spent roughly 30 minutes adjusting their decorations, which included signs, posters, blow-up pictures, balloons — and in one comical case, a row of toilet paper.

Led by an escort from the Livingston Parish Sheriff’s Office and the local fire department, parents and guardians drove through town while their seniors poked their bodies through sunroofs, stood on truck beds, or sat in the back of trailers, waving at people who cheered them on from the streets below.

Senior Emma Hutchinson sat atop a convertible near the front, with purple and white balloons flapping to her side. A few cars behind, her former softball teammate Ashley Fogg, also this year’s homecoming queen, waved at people through her vehicle’s sunroof.

Peyton Watts, who will take part in the Lions Connected program at Southeastern Louisiana University this fall, smiled wide while he was seated on the top of his family's jeep, with people shouting his name.

At one point, Carter Alphonso, the school’s 2020 homecoming king, shot a blast of confetti in the air. Behind him, a group of senior boys stood in the trailer of a military-style truck that blasted music from speakers on top.

Though Livingston Parish graduation ceremonies are still up in the air as school officials determine a plan of action amid the coronavirus, North hoped the parade let the Holden High Class of 2020 know how much it will be missed.

“Hopefully this makes up for what they've missed out on this year,” North said. “They’ve had a rough year. They deserved something like this.”