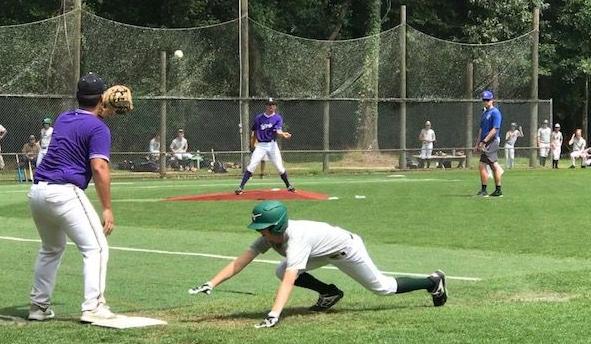 Doyle first baseman Tyson Stewart waits on the throw as French Settlement's Edward Allison slides back to the bag during last week's game at the LA Nationals facility. 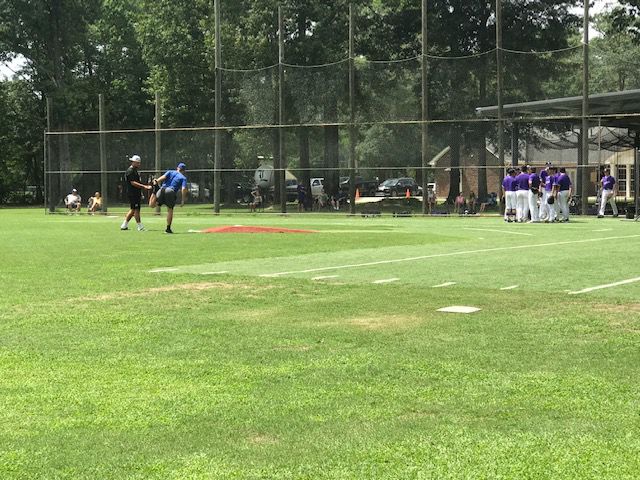 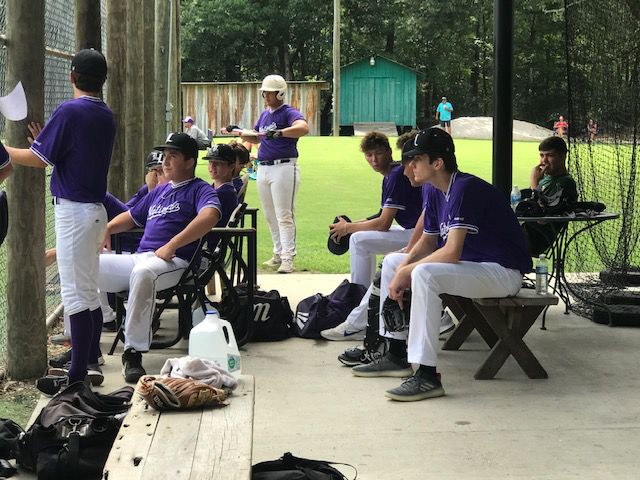 Doyle players survey the action from wooden benches and a chair swing during last week's game against French Settlement. 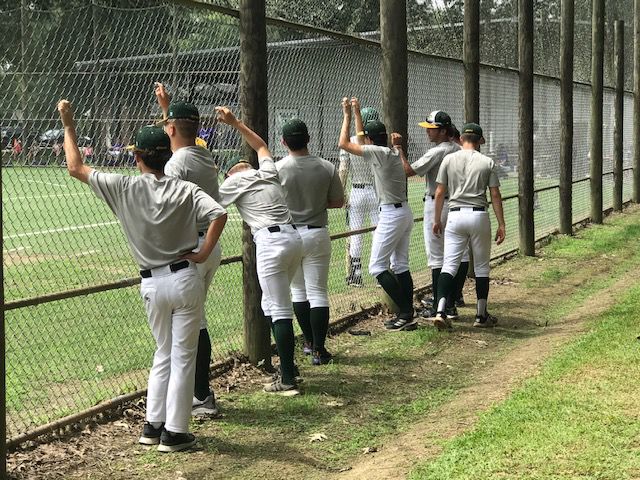 French Settlement players survey the action from the third-base side of the diamond during last week's game against Doyle at the LA Nationals facility. 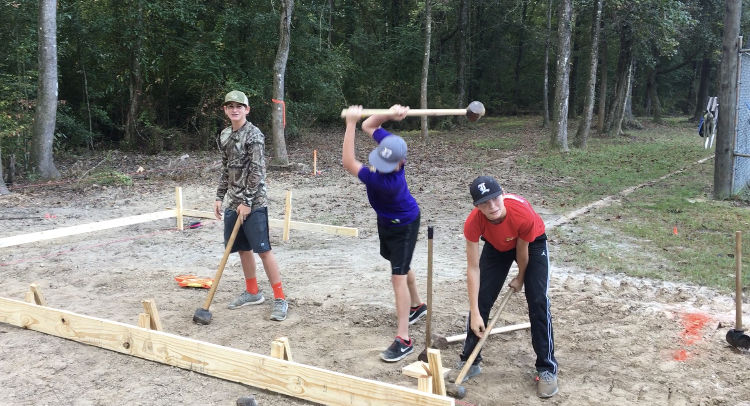 HOLDEN – Those unaware of it or not looking for it might not be able to find it on their first try, but the Louisiana Nationals practice facility has become the go-to place for summer games featuring the parish’s Class 2A baseball teams.

“If it wasn’t for them and their hospitality and letting us use their field, we wouldn’t be playing at all, or we’d be traveling,” Doyle assistant coach Darrell Frasier said. “We’d be traveling to parishes that are allowing games.”

When the summer baseball season began last month, the state was in the middle of Phase II of the state’s reopening in the midst of the novel coronavirus, and Hunt Lobell, one of the complex’s owners, along with Jay Yuratich and Jeremy Schadel, each have sons who play high school baseball, with Lobell’s at Springfield, Yuratich’s at Doyle, and Schadel’s at French Settlement.

Those teams were already working out at the Nationals facility while preparing for the summer schedule, and the original plan was to play a handful of games early in the season at the facility because while parish schools are allowed to participate in baseball during Phase II, they aren’t allowed to host games at on-campus sites.

When the state didn’t move into Phase III late last month, the Nationals’ facility, which features an outdoor field and an indoor hitting and pitching facility, became the unofficial summer baseball home for teams from Doyle, Springfield and French Settlement.

“We already work closely with those three schools right here locally in the parish to allow them to come here and use the facility for anything they may need,” Lobell said. “It was not a hard step. They just called me and said ‘hey man, do you have anything available? We want to come play.’ I just told them what times and what days I had available, and here they come.”

While some may look at playing games at the facility as a lifesaver of sorts for summer baseball for a trio of schools, Lobell had a bit of a different take.

“I think we threw them a lifeline that made it easier for them,” Lobell said. “I don’t think we saved it because I think it’s just like a lot of other things. People are going to find a way.”

Lobell said youth teams in the Nationals travel baseball organization practice Monday through Thursday from 5 p.m. to 9 p.m., bringing in roughly 40 players a night for workouts. That made it necessary for the high school teams to play their games early in the afternoons.

“It can be kind of hot, but beggars can’t be choosers,” Lobell said.

“It was pretty much a godsend, because without this, we’re just going to be intrasquad scrimmages against each other at our field, and myself … I don’t have 18 (players) to scrimmage against myself, and we can’t bring anybody else into our facility,” Gautreau said. “This is great, and I have no problem playing in the middle of the day even it’s a little bit hotter just to get these kids out on the field and see some live pitching other than our own and see what we can do in the summertime. We’re not getting a whole lot of reps in, but it’s better than nothing.”

“It’s Christmas in July almost,” Gautreau continued. “In the years past, we’d almost be wrapping up right now, and now we’re just kind of starting in July … I’m very pleased that we’ve got some place to come and it’s no big advantage to anybody.”

The indoor hitting and pitching facility opened in March of 2017, with team members helping to build the facility, even driving stakes in the early stages.

“We take pride in what we’ve got here,” Lobell said, noting the only subcontracted work was done with the concrete finishing. “Everything that you see, we’ve done everything ourselves.”

“We had the whole baseball team out here helping build it,” Lobell continued. “It kind of reminds you of an old-timey barn raising where the whole community comes together and helps build something for a neighbor. That’s kind of the way this all went together.”

The Nationals practice field, which is located behind Lobell’s house, was originally intended as a place for players in the organization to work on their skills and then play games at other sites.

As such, the field is very basic – in a good way.

There’s netting down the first-and third-base lines to protect spectators who bring their own lawn chairs to check out the action. Fans line the third-base side under trees, while those on the first-base side don’t sit as close to the action, instead going back several yards to get some shade under a row of trees.

Also, there aren’t dugouts, with players instead sitting on wooden benches. Players on the first-base side even use an outdoor chair-swing to get off their feet between innings.

“It’s almost kind of like a Field of Dreams kind of feeling, because you’ve got the woods, the crowd’s right there on you – the stands,” Springfield coach Chris Blanchard said. “It’s just fun, and it’s a blessing because we can’t play at home until Phase III – we can’t host anything. Just doing stuff there, it just means the world to me that they allow us to do it, and I greatly appreciate it. I can’t say enough good things about them and the facility and those guys.”

“It’s way more fancy than what we grew up playing on,” Blanchard said with a laugh. “We’d go out in our back yard. It didn’t look like that, but it has that same feel. It’s just backyard baseball. It’s just fun, roll your sleeves up, throw strikes, have a good time and let’s go play some ball. Kind of like the Sandlot.”

The turf infield has been pieced together. Lobell said the original turf came from Southeastern Louisiana’s football field the last time the school replaced its turf with large remnants being placed in large pieces next to all of the bases.

“That worked so good and was so effective at keeping the mud and the wear and tear down that I had somebody contact me. They were doing a big field in Round Rock, Texas. They were taking it up and just bartered with the guys and worked out a deal where we got as much as we could on an 18-wheeler for a certain price,” Lobell said. “We agreed to it, and they shipped it to us. We laid it out ourselves, and it seems to be doing fine.”

The new turf was added in November and the 10-yard line from its previous incarnation on a football field is visible on the third-base side of the infield.

The field also doesn’t have an outfield fence, with woods in right field and tall grass in left and center fields.

With no outfield fence, Lobell said it’s left up to the coaches to formulate the ground rules before games.

“They’ll say, ‘OK, if it gets hit into the trees in the air, it’s a home run. If it goes in the woods because it got through, it’s a ground-rule double,’” Lobell said. “They’ll say that for the kind of tall grass out there, too. If it rolls past the outfield and gets into that tall grass, it’s a double. If it lands in the grass, it’s a home run. They’ll just make up their rules – back yard, country boy rules, and just get at it.”

It’s allowed Frasier to stick with a formula for Doyle’s hitters.

“We treat their right field here like the Red Sox do Fenway with the Green Monster,” Frasier said. “It’s so short that anything over your head’s going in the woods anyway, so play in shallow and take the single away, right? It’s the same concept. We talk about that for sure.”

For Doyle first baseman Tyson Stewart, it’s all about being able to play.

“We hit quite a few in the trees in right field,” Stewart said. “They usually call it a ground-rule double, or if it goes 10 feet above the trees, it will be a home run.”

“I’m just glad to be making adjustments,” Stewart said. “Any way, however we can be playing ball, that’s what I’ll do.”

Additionally, lights were added in the outfield in the fall.

“It is old-school,” Frasier said. “It’s like somebody’s back yard, and it literally is somebody’s back yard. But as nice as it is, it’s not the back yard that you and I played in, for sure. It’s almost like a park when you come in with the fences. They put in lights now, so it’s growing as the community grows and as the players grow. The more teams that they get – the Nationals teams – the more it’s going to grow.”

Lobell, however, said the Nationals organization isn’t looking to get too big.

“We’re constantly making small improvements, but as far as expanding and getting bigger, we’re not trying to have 30 teams here,” Lobell said. “We’re just trying to have a few local teams and do what we can do and offer something to the community here. We want to stay a little mom and pop organization. We don’t want to be trying to compete with the big boys.”

For Frasier, it’s not about where the teams play. It’s that they’re fortunate enough to be playing at all this summer.

“After only getting eight games in our season and then sitting around for two months, we’re just happy to get in the weight room and get out and play a little baseball, knock off some rust and start prepping for next year,” Frasier said. “You don’t get better at baseball in January. You get better at baseball between August and November. That’s your offseason.”