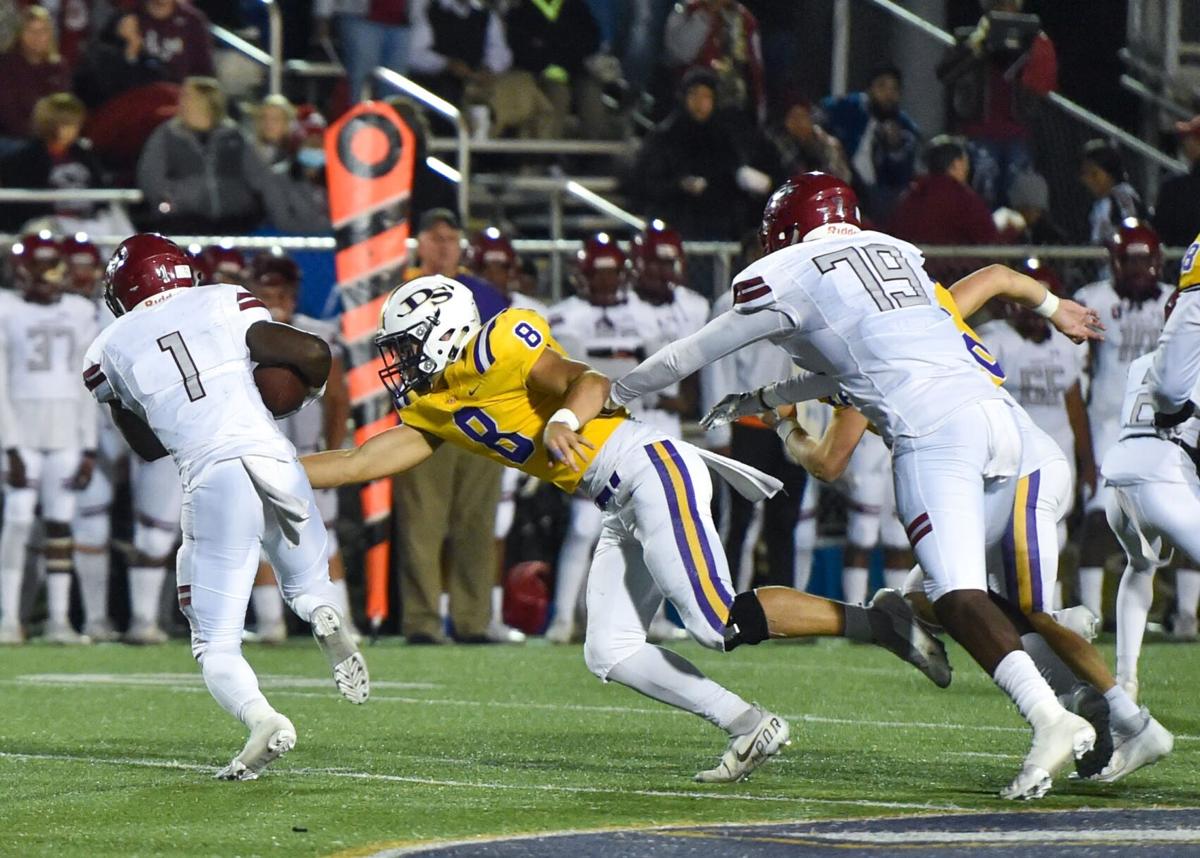 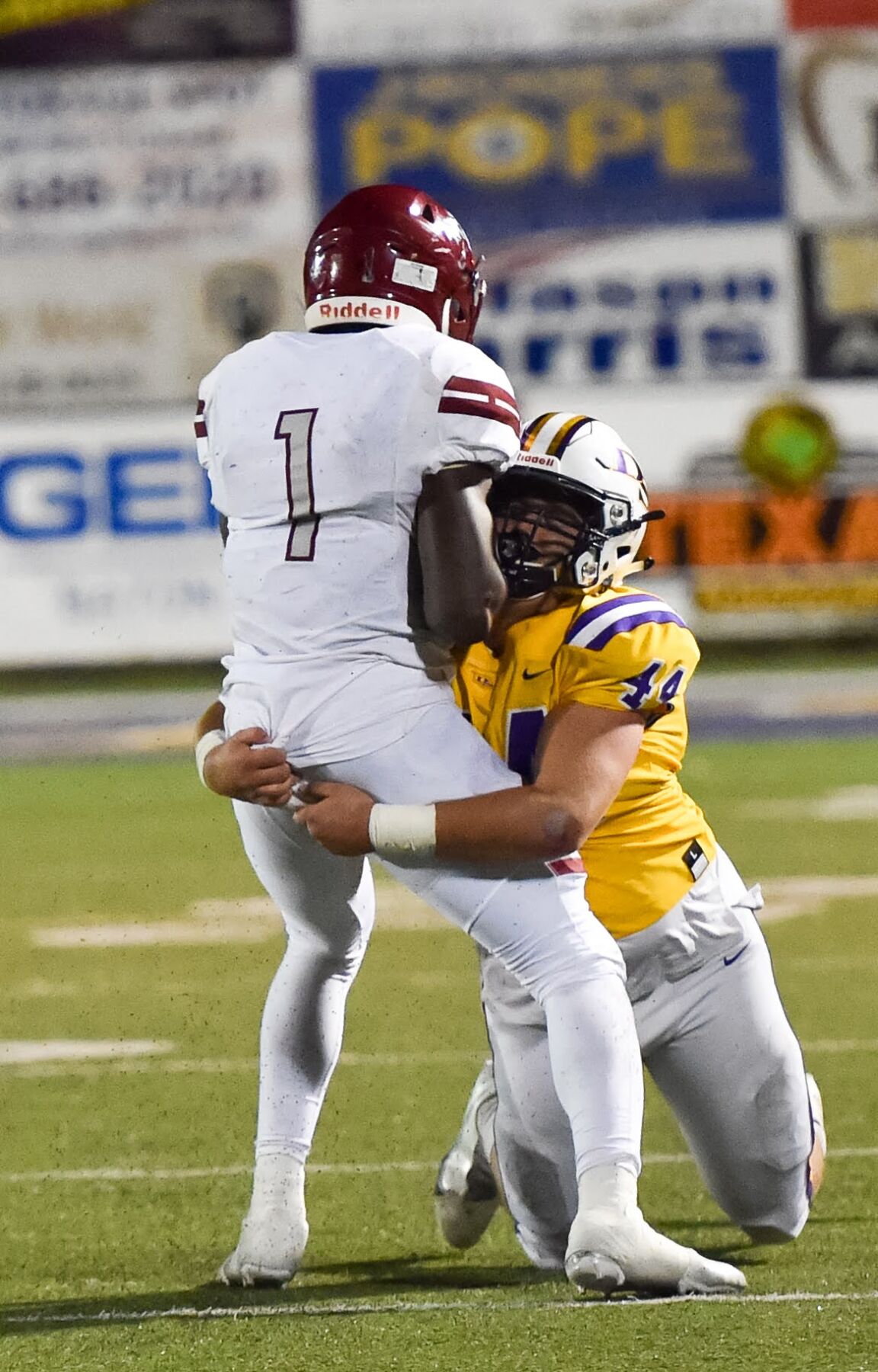 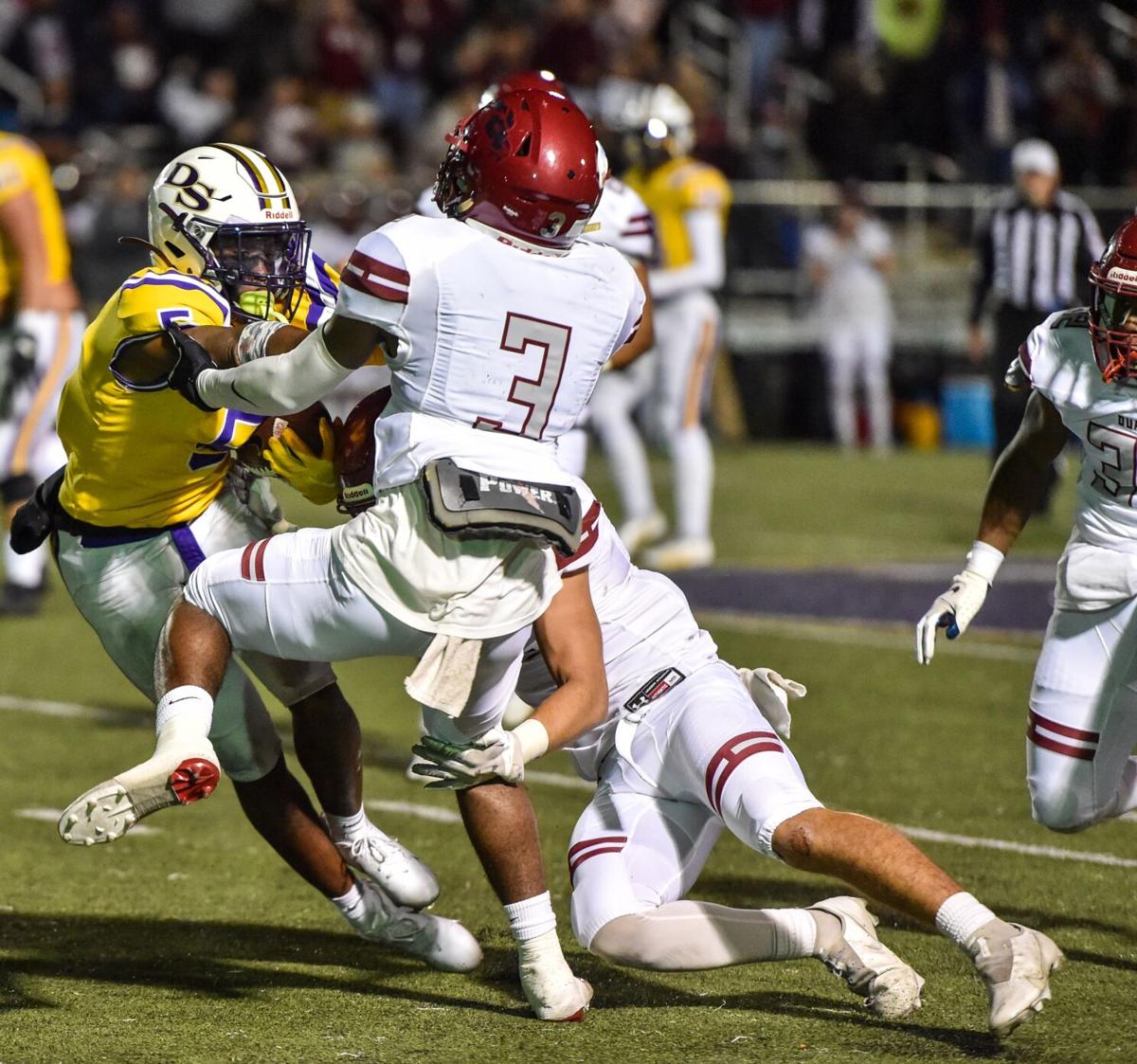 DENHAM SPRINGS -- It’s usually a pretty safe bet the team that wins the turnover battle is going to win the game.

Of course, games don’t always work out like that, but in Denham Springs’ Class 5A regional playoff game against Ouachita Parish, that’s exactly what happened.

The No. 27 Yellow Jackets lost three fumbles in the second half, including one that was returned 95 yards for a touchdown, as the No. 11 Lions rallied for a 20-14 win in the final game at the current Yellow Jacket Stadium on Friday.

“Hats off to them,” Denham Springs coach Brett Beard said after the Yellow Jackets lost another fumble in OPHS territory with under a minute to play and finished the season at 6-5. “They finished the game. Our guys fought, had a little adversity, got down a couple of scores, kept coming back for more. We had our chance right there with a minute left, and that’s all you can ask for. These kids gave us everything. I couldn’t be more proud of every second I had with them this year and the last two years here at Denham. This program is trending in the right direction because of the legacy this senior class is leaving behind. We’ve got something to grow on and something to be excited about. We plan on going back to work and being better next year.”

“There’s always breaks in the game, and you just hope those breaks don’t go against you,” Beard said. “We had a couple of breaks go against us that were tough, and we just ran out of time.”

Denham Springs led 7-6 at halftime, but the turning point in the game came after the Yellow Jackets stopped Ouachita Parish on downs to end the opening drive of the second half as Jed Cambre and Jordan Reams tackled Marcell Henderson after a gain of a yard on fourth-and-3 at the DSHS 45.

From there, the Yellow Jackets went strictly to the ground game, with Micah Harrison (four carries for 26 yards) and Ray McKneely (six carries for 25 yards) getting all the work, picking up four first downs while moving the ball to Ouachita Parish 5.

McKneely carried over the left side on second and goal and was hit, losing the ball, which was scooped up by Winston Sanders’ who went untouched down the sideline for a 95-yard return for a touchdown, helping the Lions to a 13-7 lead.

“No matter the call being what it was, you can’t even let them make that choice,” Beard said. “We’ve got to protect the ball all the way. We can’t give anybody a chance to make a call that could go against us. You don’t point fingers at anybody. Our kids fought and gave us every chance. You finish that drive right there, you go up eight. You could kind of see they were starting to get a little flat. You could see momentum was really all on our side, and that was a big shift.”

On its next drive, Denham Springs drove to the Ouachita Parish 31 after a defensive holding call against the Lions. On the next play, Harrison lost a fumble, and the Lions took over at their own 23.

That led to Carldell Sirmon’s 46-yard touchdown run on the first play of the fourth quarter, helping put Ouachita Parish ahead 20-7.

“We knew they were a running team,” DSHS defensive lineman Dylan Watson said. “We had to load the box. We let a couple slip away from us. Overall, I think we played well. Just a couple of things slipped away from us.”

On the ensuing kickoff, an illegal block penalty against the Lions was tacked on to the end of the return, moving the ball to the Ouachita Parish 48.

Four plays later, Jerry Horne hit Harrison on a 24-yard pass to the OPHS 10, setting up McKneely’s 7-yard jump pass to Andrew Goodwin on third-and-goal for a touchdown. Noah Hood’s PAT cut the lead to 20-14 with 7:58 left in the game.

“One thing I should say is I never expected that I would catch a jump pass from my running back in the end zone,” Goodwin said with a laugh. “I never expected that, but I’m glad we worked that in the scheme, and it definitely paid off. It was an overall dangerous play.”

McKneely had 96 yards on 27 carries, while Harrison added 83 yards on 15 carries.

The Yellow Jackets forced a punt and took over at their own 20 with 4:20 to play, moving the ball to the Ouachita Parish 49 with 1: 54 left, when the Lions were flagged for pass interference.

The call moved the ball to the OPHS 34, where the Yellow Jackets faced second-and-2. Harrison lost a yard, but McKneely picked up three on third down to keep the drive going.

After Horne lost a yard, a false start penalty on the Yellow Jackets and an incomplete pass, DSHS faced third-and-16 and the OPHS 38. As Horne looked for a receiver, he was hit from behind, and the ball came free. The Lions recovered and were able to run out the clock.

“When you’ve got a defensive end hawking a quarterback, you know that quarterback’s moving, looking to throw and running, and we defensive ends are a lot better athletes than quarterbacks most of the time, and that’s what happens,” Beard, a former defensive end at Vanderbilt and Southeastern Louisiana University said with a laugh. “You get hawked from behind. That can happen to anybody. We had a chance. We fought for 48 minutes, didn’t quit and had a chance. That’s all you can ask for.”

Horne finished 4-for-6 for 73 yards and a touchdown.

“We felt really comfortable with the little freshman (Horne) there at the end. We really did,” Beard said. “He ran our offense perfectly and had chances. The ball didn’t bounce our way tonight. That’s part of it. Our guys fought for 48 minutes and played Denham Springs football and have created something special here that’s going to grow, and I can’t wait to see where it goes. We’ll always look back on this year and look at these 18, 19 seniors that gave us everything that left the legacy that blew up Denham Springs football.”

Ouachita Parish finished with 267 yards rushing with Jackson going for 130 on 15 carries and Henderson 103 on 20 carries.

“I feel like we let up more than we should have,” Denham Springs’ Hayden Rushing said. “I feel like the majority of what they got was our fault. Our game plan was to really stop the run, because that’s what they were really into. Their quarterback got a lot of yards running. We wanted our linebackers to spill and then safeties come down or our other outside linebackers come down and fill the holes.”

Meanwhile, the first half took roughly 45 minutes to play with both teams getting three possessions.

“Like I said earlier in the year, I looked at my watch a couple of times and it was 10 o’clock and we were still playing football,” Beard said. “That’s not good time management on my part. I knew looking at it that we had to get better there. You’ve got to be aware of clock management. You’ve got to be aware of possessions. We felt like these last few weeks, we really kind of found a niche and something we can grow offensively and have an identity going forward. I’m excited to see the growth next year.”

After DSHS punted on its first possession, the Lions took over at their own 15 and went exclusively to the ground as Zach Jackson had runs of 11, 16, 32 and 10 yards to spark the 12-play drive.

Jackson’s 10-yard run got the Lions to the DSHS 8, but on second down, Marcell Henderson was sacked for a loss of six. Two plays later, a 21-yard field goal attempt by Emilio Rios was blocked.

The ensuing DSHS drive ended in a 48-yard punt by Kaleb Mitchell that backed Ouachita Parish up to its own five.

OPHS responded, converting on third down twice before Jackson scrambled for 11 yards and completed a 17-yard pass to Jacob McCullars to the DSHS 20. The Lions lost 17 yards because of a bad snap on the next play, but Henderson busted a 22-yard run two plays later, and Sirmons picked up three yards on fourth-and-1 at the DSHS.

That led to Sirmons’ 7-yard touchdown run on the next play. The PAT was blocked, but the Lions led 6-0.

Denham responded with a nine play, 66-yard scoring drive, which culminated in Horne’s 28-yard touchdown pass to Goodwin, who got behind the defense to make the catch. Hood’s PAT put DSHS ahead 7-6.

“We had double posts going across the middle, so we figured they were going to pick me up and leave the flat route wide open, but the safety blitzed, so it left me wide open on the goal line,” Goodwin said. “It was an easy throw, easy catch.”

OPHS drove to its own 49 before time expired to end the first half.

When the game ended, there was reflection on the season.

“I would just say that we did something that nobody in the state thought we could,” Rushing said. “I really wish we would have gone farther. We’re not ready for these seniors to leave, but they set an amazing foundation for us … to grow and build off of.”

Added Goodwin: “I love these seniors with all my heart. They fought through more adversity than anybody I’ve ever known. To the loss of a coach (Brian Smith), to the loss of a player (Remy Hidalgo), loss of personnel, everything. These seniors have fought, and I can’t take that away from them.”