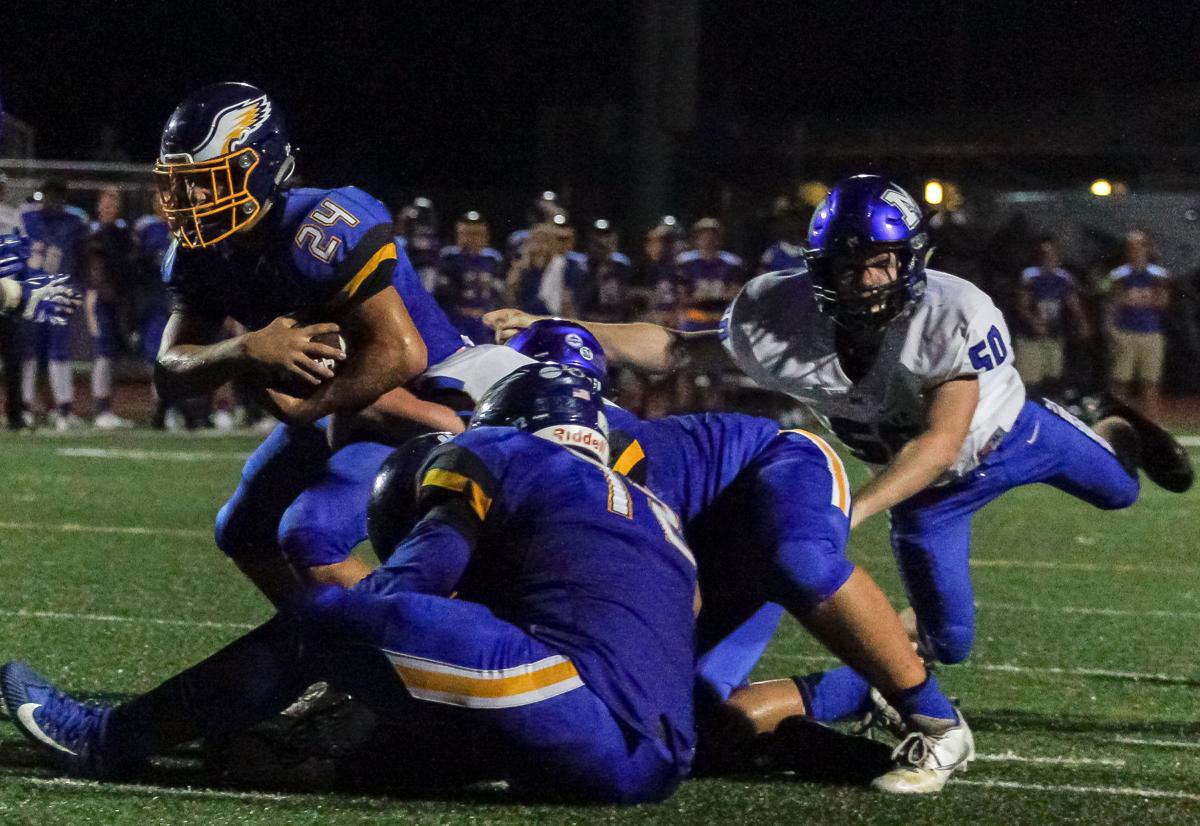 Live Oak running back Haden Long (24) runs through a tackle in the red zone. 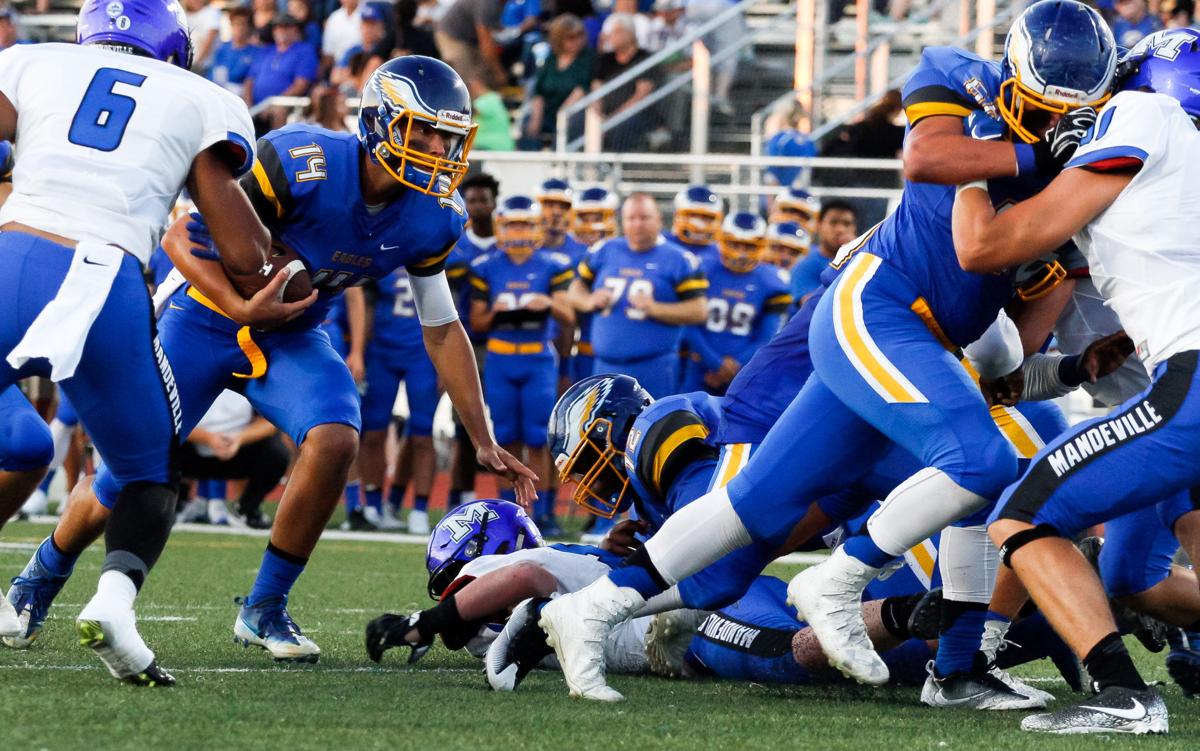 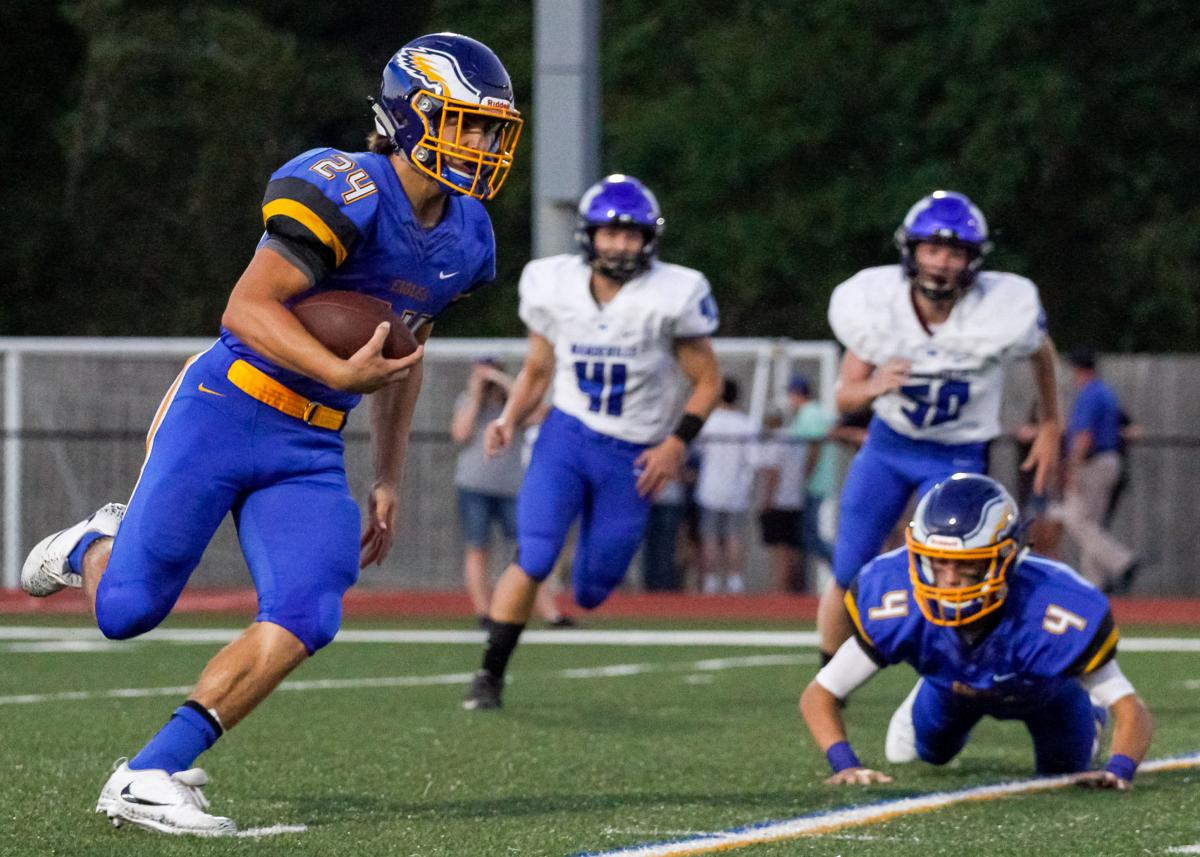 Live Oak running back Haden Long (24) breaks free as he turns the corner. 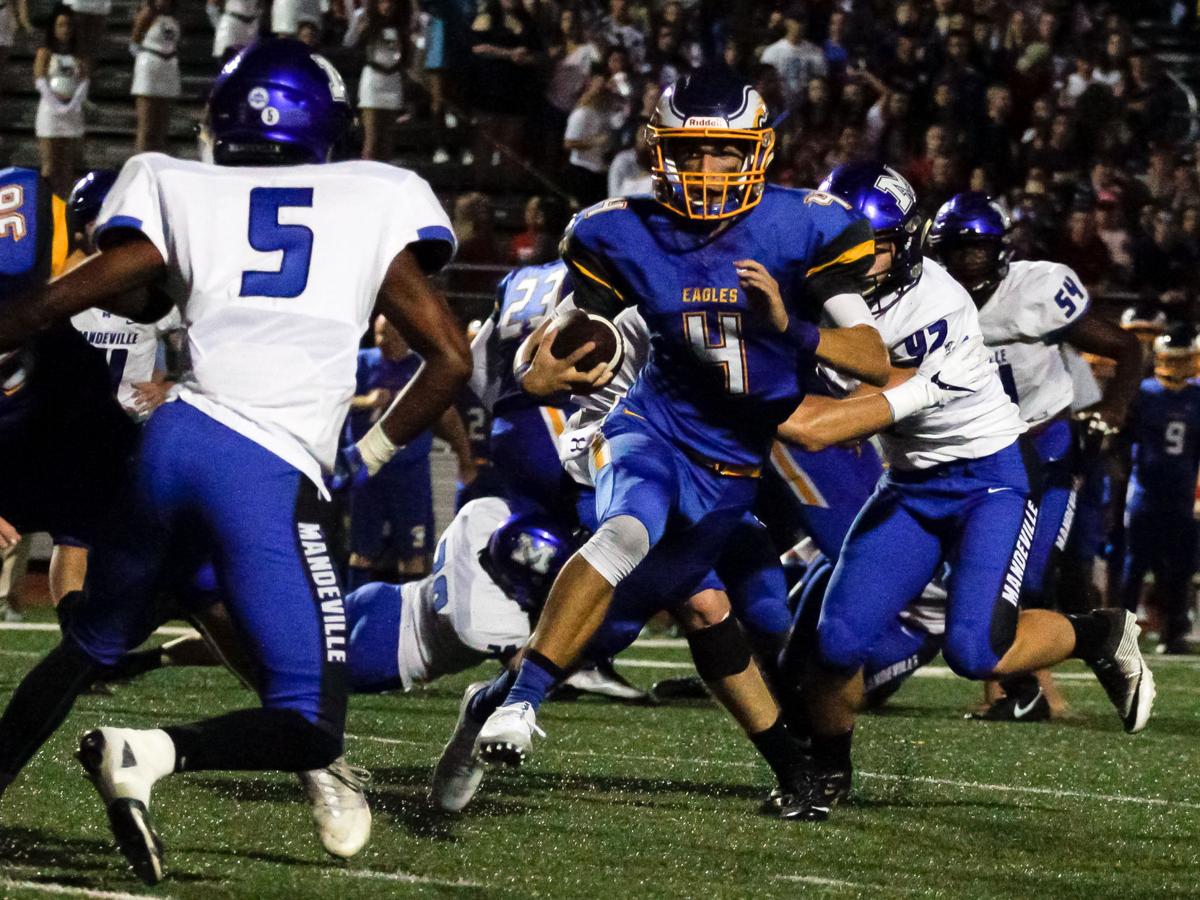 Live Oak running back Haden Long (24) runs through a tackle in the red zone.

WATSON -- There were audible grumblings coming from the press box about the offense that Live Oak was running during a 45-21 win over Mandeville Friday night.

“I’m pretty sure this is the same offense that LSU ran during the first national championship,” one voice said.

Another voice agreed, confirming just how old-school this particular offensive game plan was.

The Eagles’ flexbone offense, looking eerily similar to the Wing-T that LSU ran on the way to 1958 national championship, baffled the Skippers for four quarters, chewing clock and moving the chains one handoff at a time.

A whopping 10 players recorded a total of 32 rushes for 355 yards on the ground, tallying 22 first downs in the process.

At the center of the ground attack were quarterback Sal Palermo and wingback Cameron Dickerson, who both found pay dirt twice.

While having a bevy of talent in your backfield certainly doesn’t hurt, Live Oak coach Brett Beard knew that no run-heavy offense is possible without a solid offensive line.

“We’ve issued that challenge to them and it’s obvious we’ll go where they go – where they take us,” he said. “They’ve really come together and really bought into one play at a time, They get better one play at a time. It seems like it’s been two weeks in a row the game has gotten slower for them and they got nastier as the game went on which tells me they’re getting more comfortable, in better shape.”

Similar to 21-0 win at Woodlawn in the season opener, things started slowly for Live Oak, which salvaged a touchdown after Skippers’ return man Ben Bonner muffed a punt inside his own 10-yard-line. Mandeville countered with a series of screen passes that eventually culminated in Taron Jones’ 9-yard touchdown run.

The fast paced, no-huddle offense forced Beard to call a timeout early after watching his defense fight from its heels. After that touchdown, the Eagles’ defense dug in.

Live Oak capitalized by putting up 31 unanswered points -- all on the ground with the exception of a 38-yard field goal by Nathan Holliday -- before Mandeville scored in the third quarter.

“I feel like our defense is the best in the state,” Dickerson said. “We have so many playmakers that can step up at any time. So I’m never worried about our D. They can make it down to the 10-yard line, but I know they’ll make the stop.”

While Mandeville quarterback Andrew Brister had no trouble finding his man on the quick passes, the sophomore struggled a bit finding his target downfield, aside from a pair of passes to wide receiver Roland Wallace that tallied 62 yards on the same drive.

Palermo only recorded three pass attempts, two of them finding their mark for 26 yards, the result of a highly effective ground game. Conversely, the Skippers only managed 49 yards on 11 touches on the ground to go along with the 272 yards through the air.