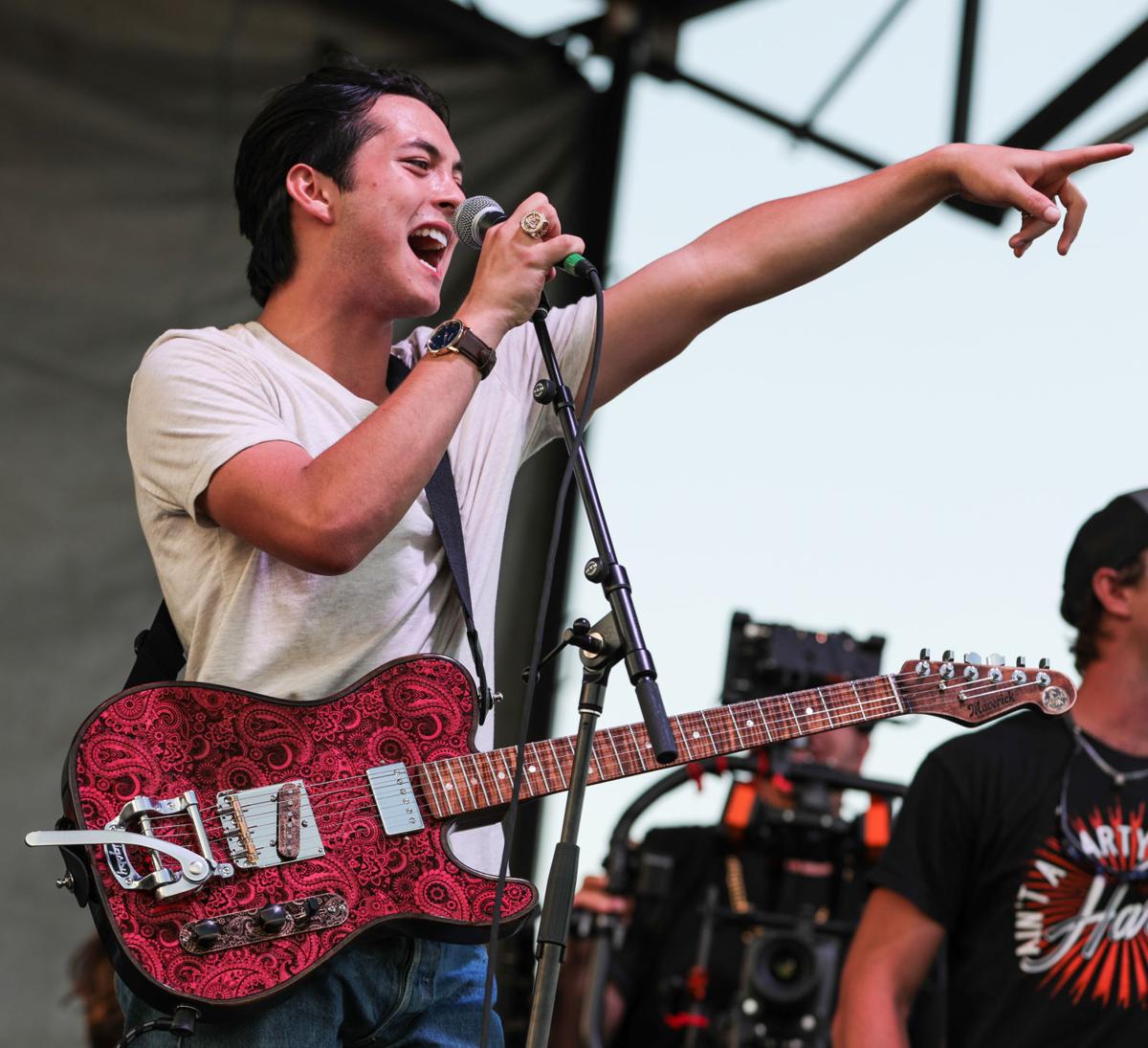 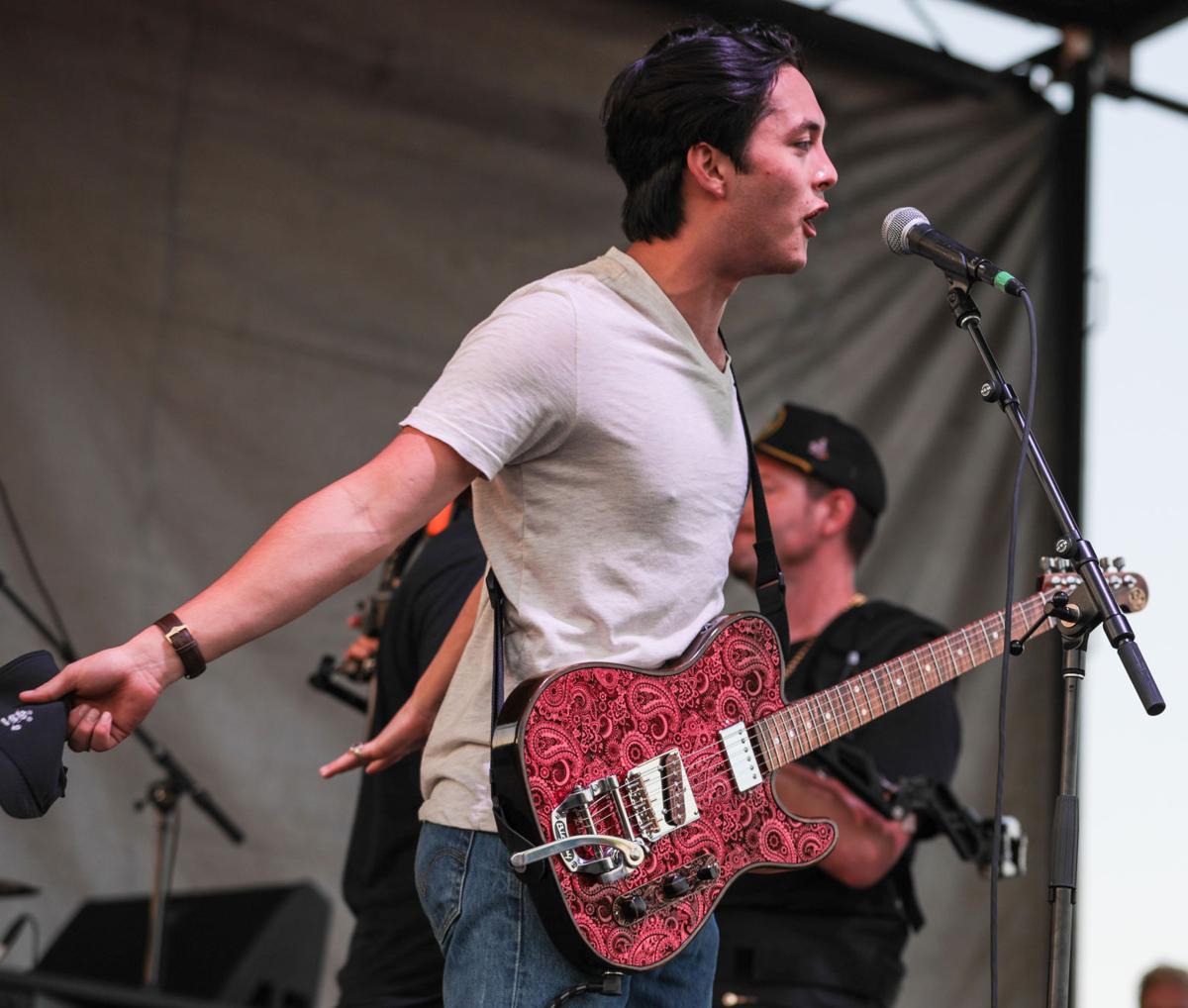 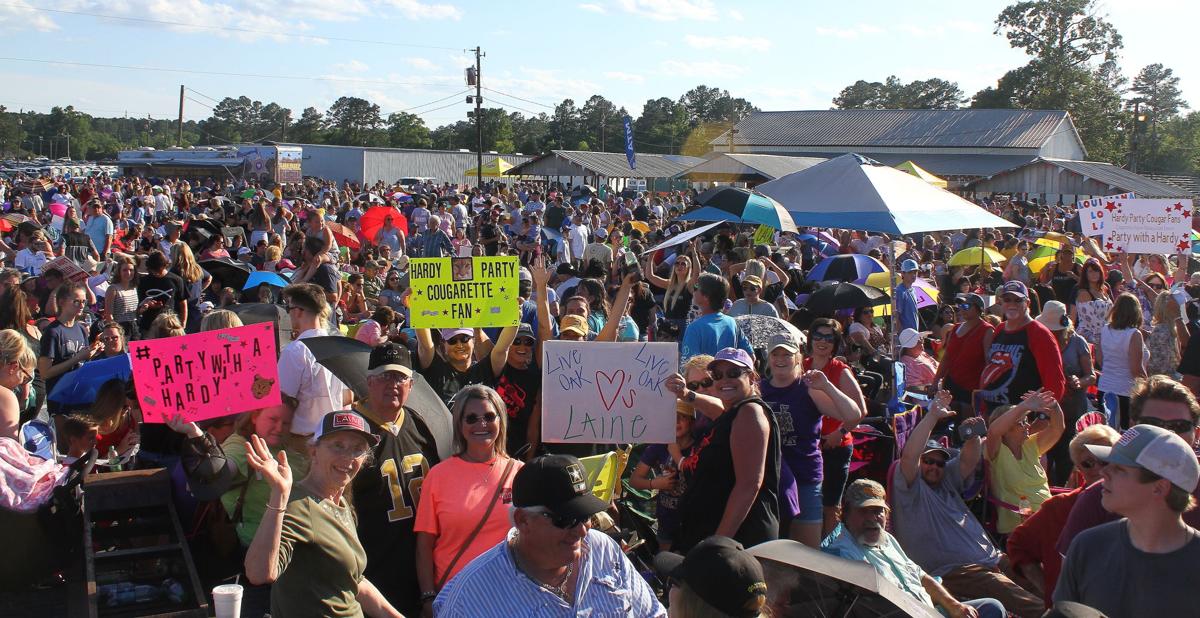 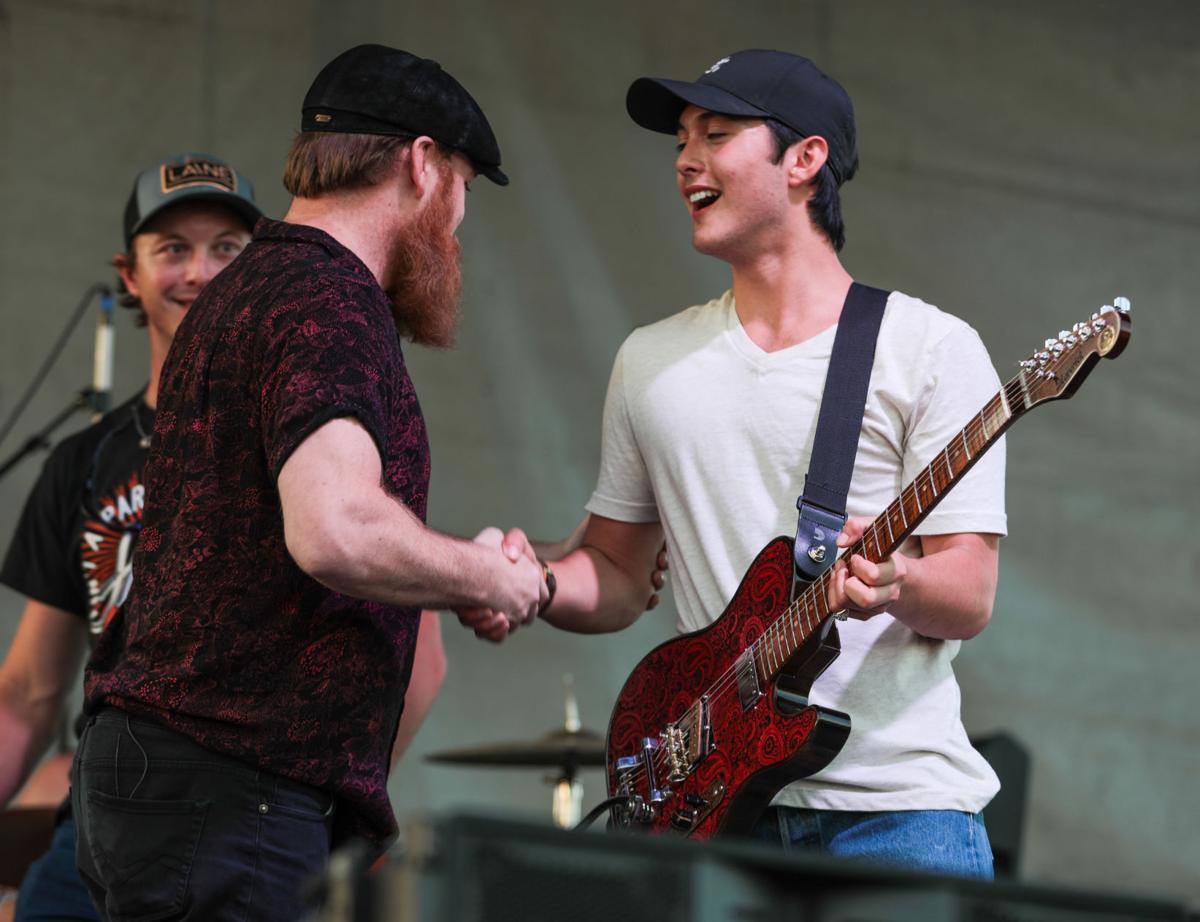 American Idol finalist Laine Hardy greets Marc Broussard during his performance at the Livingston Parish Fairgrounds on Tuesday, May 14. Broussard, a Louisiana native, surprised Hardy on stage to sing his song, "Home."

And what a party it was.

American Idol finalist Laine Hardy made his rockstar return to the Bayou State on Tuesday, when he visited the Governor’s Mansion, went back to his alma mater, and toured his hometown before capping off the unforgettable day with a rousing parade and concert at the Livingston Parish Fairgrounds.

'It's overwhelming' | Laine Hardy returns to French Settlement High for pep rally, key to the city, impersonator contest and more

The fairgrounds were filled to capacity as roughly 10,000 screaming fans arrived to cheer on the local celebrity, who will perform in the American Idol finale in Los Angeles on Sunday, May 19. Many wore “Laine Hardy” T-shirt and hats, while others held up signs that read “We Love Laine,” “Welcome Home,” and “We Love the Bayou Boy.”

The entire day was quite overwhelming, Hardy said. It was also better than he ever could’ve imagined — and he thanked his fans for that.

“Today has been the best day of my life,” Hardy told the crowd, which didn’t rest for a minute during his five-song set. “And it’s because of y’all. I wouldn’t be here without y’all.”

Hardy had a heck of a day back home in Louisiana, where he grew up in the backwoods of French Settlement before becoming an overnight television star at the tender age of 18.

At 6 a.m., Hardy was shaking hands with Gov. John Bel Edwards, who issued an executive order proclaiming May 14, 2019, as “Laine Hardy Day.”

Following the trip to the Governor’s Mansion, Hardy returned to French Settlement High, where the school held a pep rally, a Laine Hardy impersonator contest and made him the first-ever recipient of the FSHS Star of Stars honor. During the visit, Mayor Toni Guitrau also presented Hardy a key to the city.

“Y’all put the biggest smile on my face today,” Hardy said. “My cheeks are hurting.”

After that, Hardy and his American Idol camera crew — which filmed his every move during the hectic day — headed to Pete’s Landing, where he hopped on a boat with his older brother Kyle. The two then made their way to Blood River Landing in Springfield, where more than 100 family members and close friends gathered for a surprise party in Hardy’s honor.

Like he did the entire day, Hardy shyly shrugged his shoulders, smiled and gave a heartfelt “thank you.”

“It’s really been tough out there,” he said. “But seeing the support from home has pushed me through.”

As crazy as his morning was, the party was only getting started at that point — the Laine Train then headed to the Town of Livingston for a parade and concert that had been in the works for weeks.

Though it took longer than expected, it didn't disappoint.

Originally scheduled to begin at 5:15 p.m., Hardy’s homecoming parade through Livingston didn’t get rolling until more than an hour later as cars stretched down Hwy. 190 in both directions for miles, with people coming from all over Louisiana — and across the country.

When the parade finally began, dozens of four-wheelers passed by spectators who lined both sides of the highway, followed by trucks, airboats, trailers, fire trucks, police escorts and other floats.

Hardy and his parents, Cindy and Barry, came up last in a boat that was being hauled behind a LPSO vehicle. Hardy waved at fans as they screamed his name — “LAINE, LAINE” — until he arrived near the stage at the fairgrounds, which were as packed as they’ve ever been for the once-in-a-lifetime event.

The Idol singer took the stage close to 7:30 p.m. — about an hour later than was planned — but the tardiness didn’t phase the crowd one bit. Small children sat on their parents’ shoulders to catch a glimpse, and people squeezed together as they tried to inch closer to the stage.

After that, it was party time.

With his arms outstretched, Hardy walked on stage to a rowdy applause from thousands of fans who had waited hours in the heat to see the American Idol star.

After that, Hardy’s four-member family band — The Band Hardy — reunited in front of a crowd that was bursting with every move the 18-year-old singer made. Together, the band started off with “Pride and Joy,” “In the Bayou,” and “Home,” which also featured Louisiana singer Marc Broussard.

But even Broussard, who has eight studio albums to his credit, said he wanted to get in on the Hardy action.

“I was hoping when you go on your own tour, maybe I could come with you,” Broussard said.

After Broussard left the stage, Hardy performed what has become his own anthem — “Hurricane” by The Band of Heathens, the same song that sent Hardy on this American Idol journey that is now two years in the making.

The entire crowd sang with Hardy, and at several moments it was obvious the emotions of it all were getting to him. He choked up several times, and at one point he said, “This is awesome,” in the middle of a verse before throwing his hat to the crowd.

He performed one last song — “Louisiana Lady” — before thanking the crowd for their support in his American idol journey from the beginning.

“Thank y’all for coming out,” Hardy said to the crowd. “I haven’t been home since April 2, and it means a lot to me to see all this love and appreciation. I’m way out in California, but thank y’all so much for voting for me and letting me come back home.”