You are the owner of this article.
Edit Article Add New Article
Sections
Multimedia
e-Edition
Subscribe
About The News
Classifieds
Local Businesses
Advertising
Try our app!
1 of 9 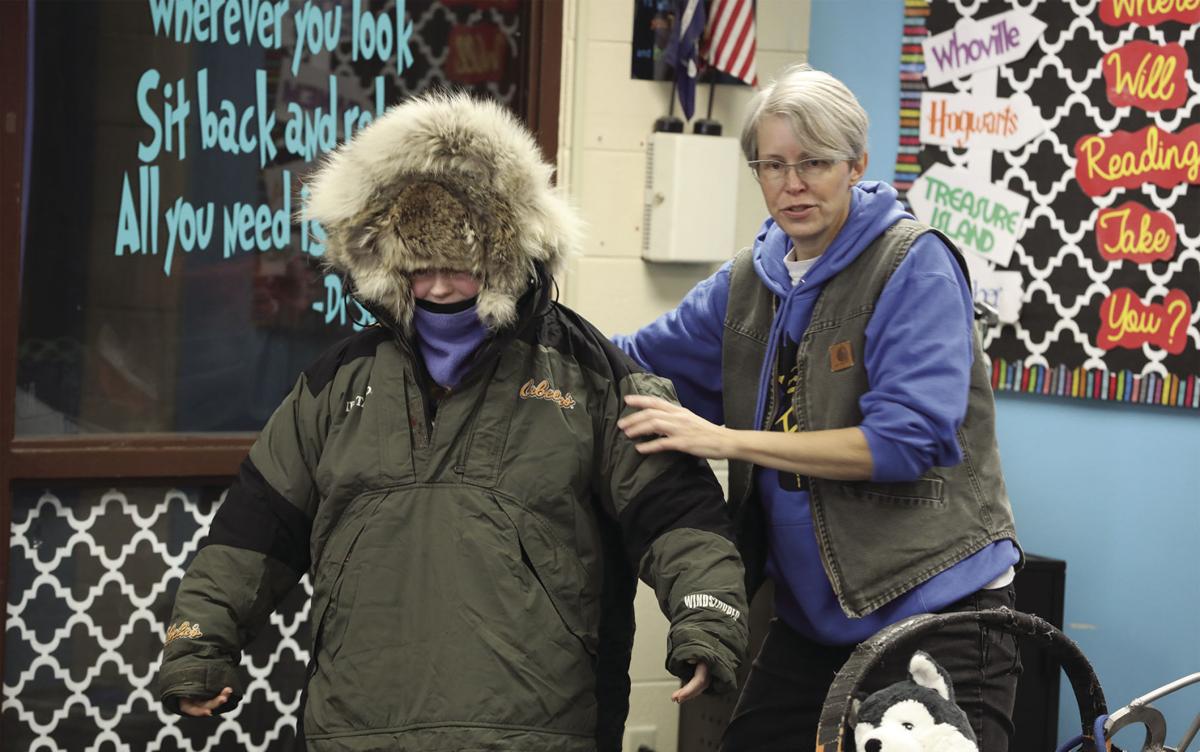 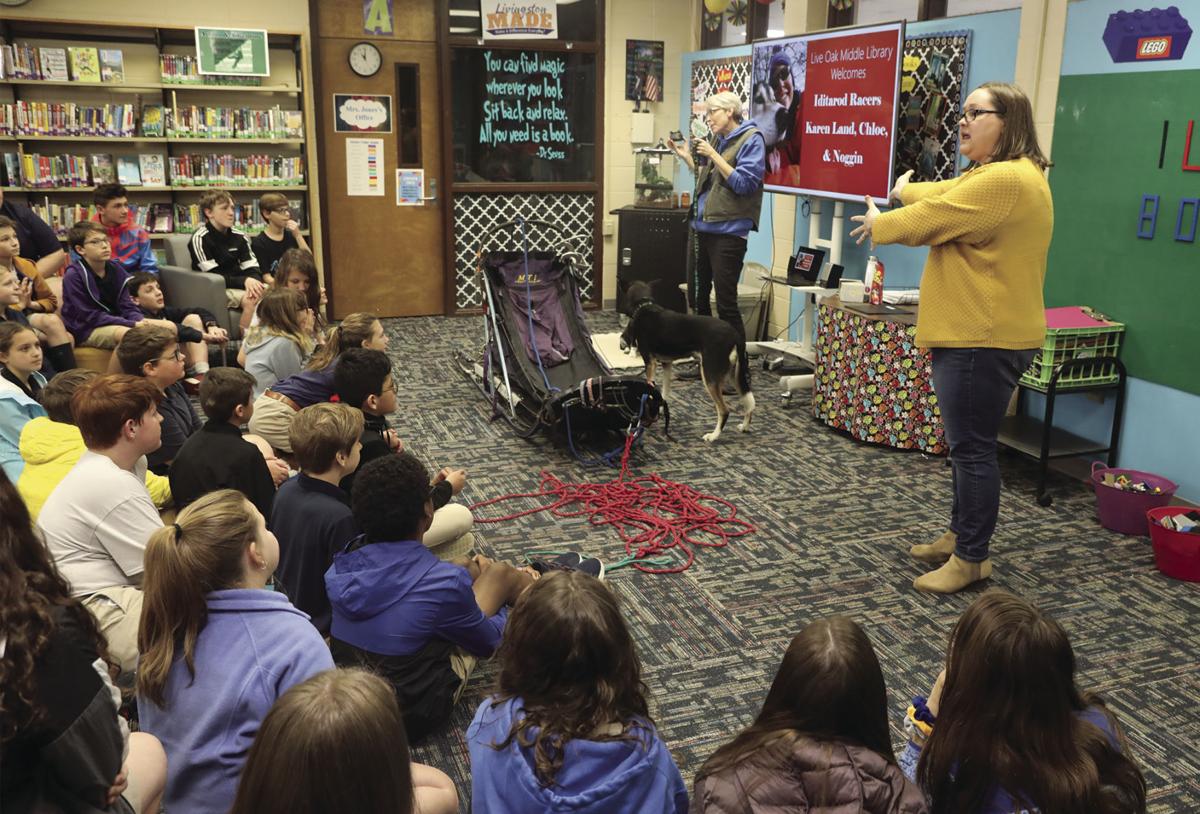 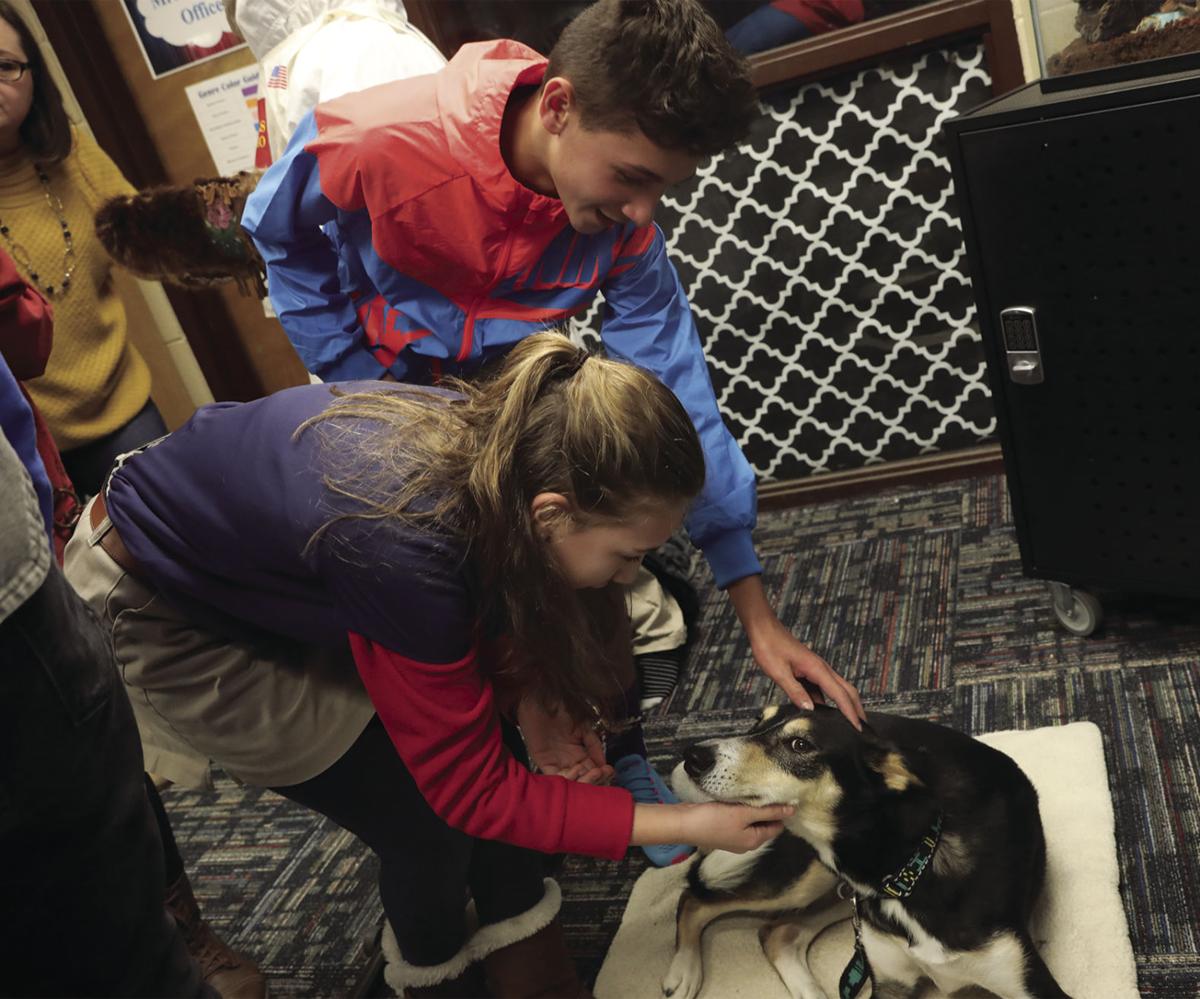 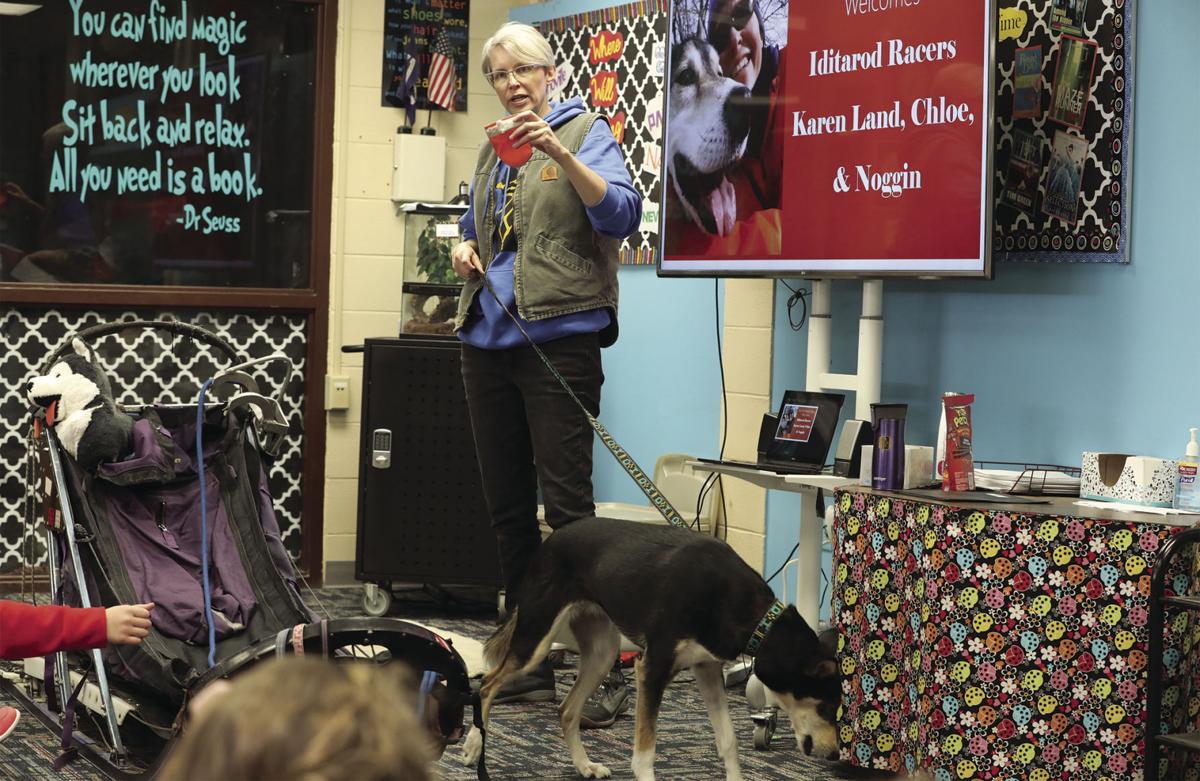 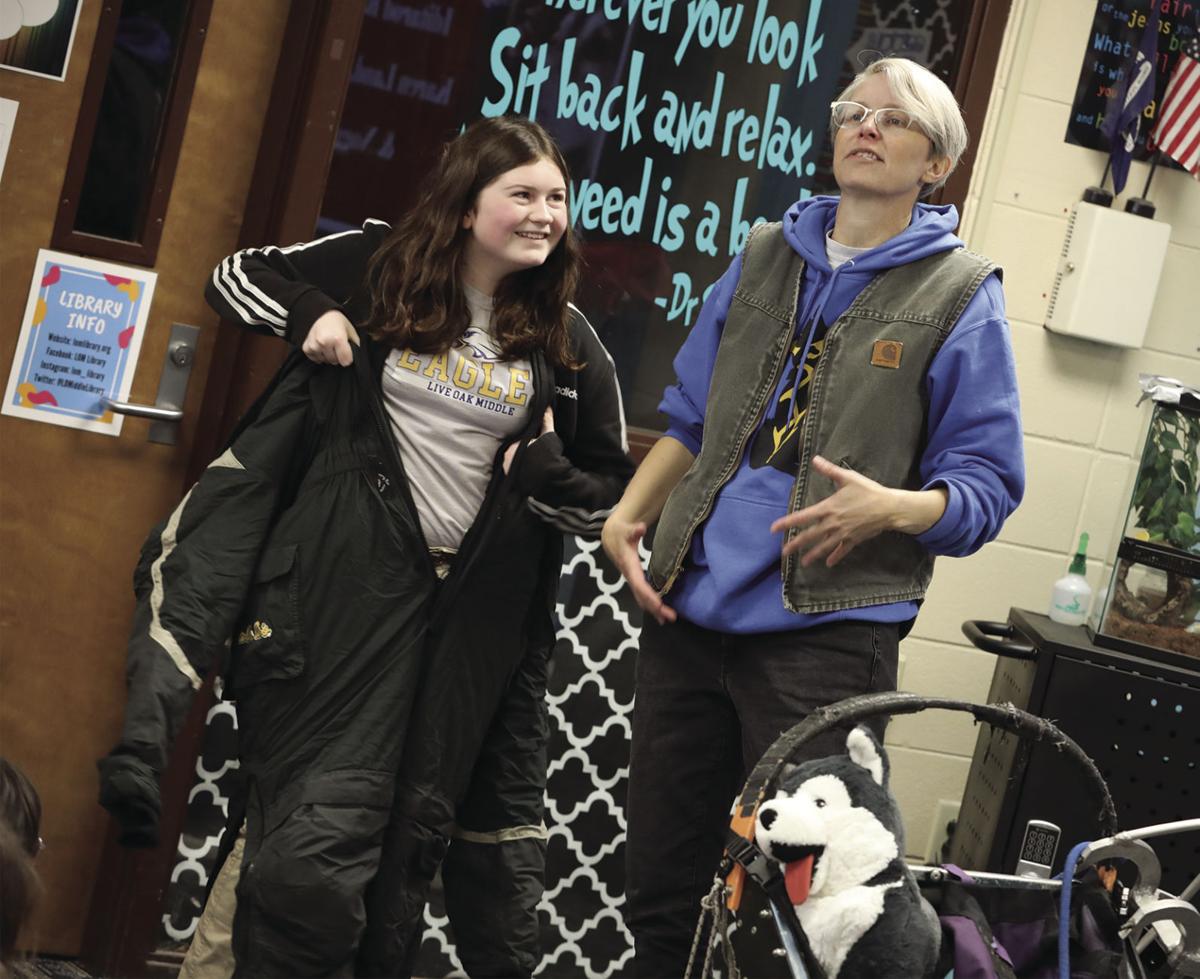 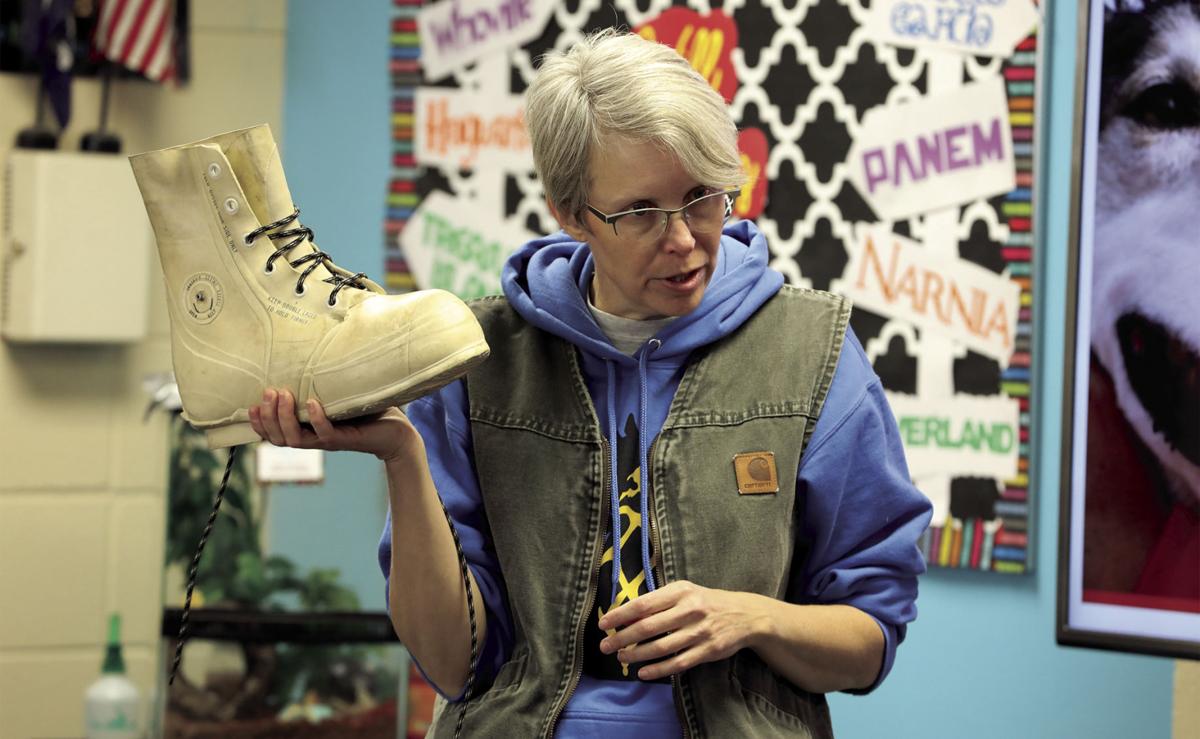 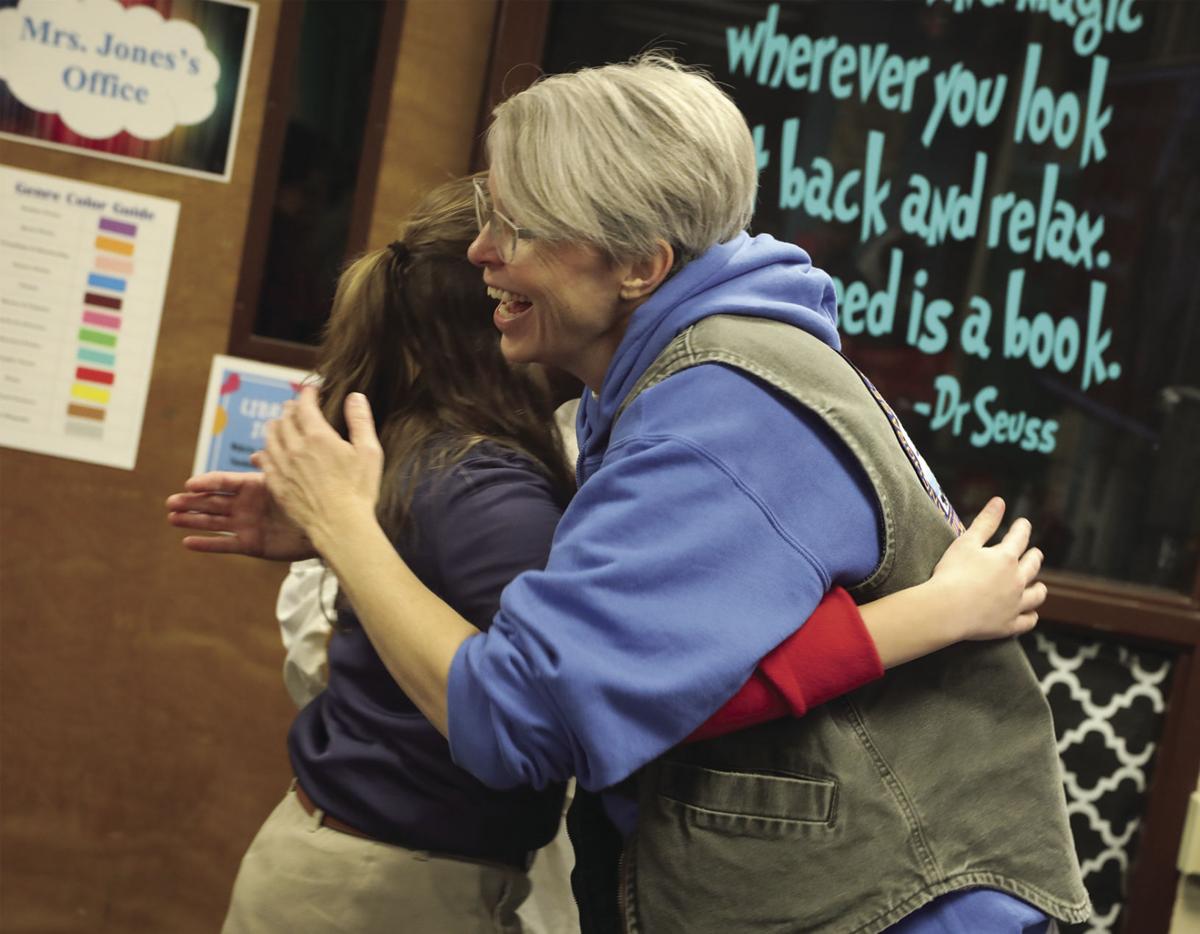 Karen Land, a writer, public speaker, and wilderness advocate, hugs a student during her visit to Live Oak Middle to discuss dog racing and the environment on Friday, Feb. 7, 2020. 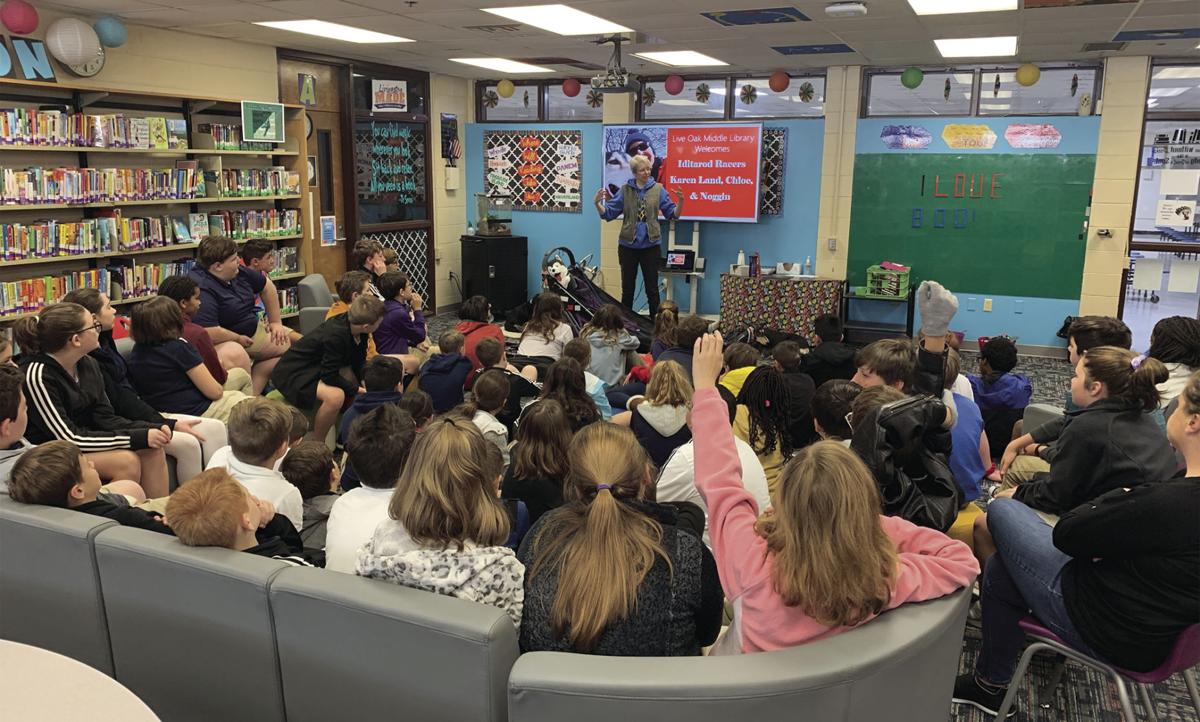 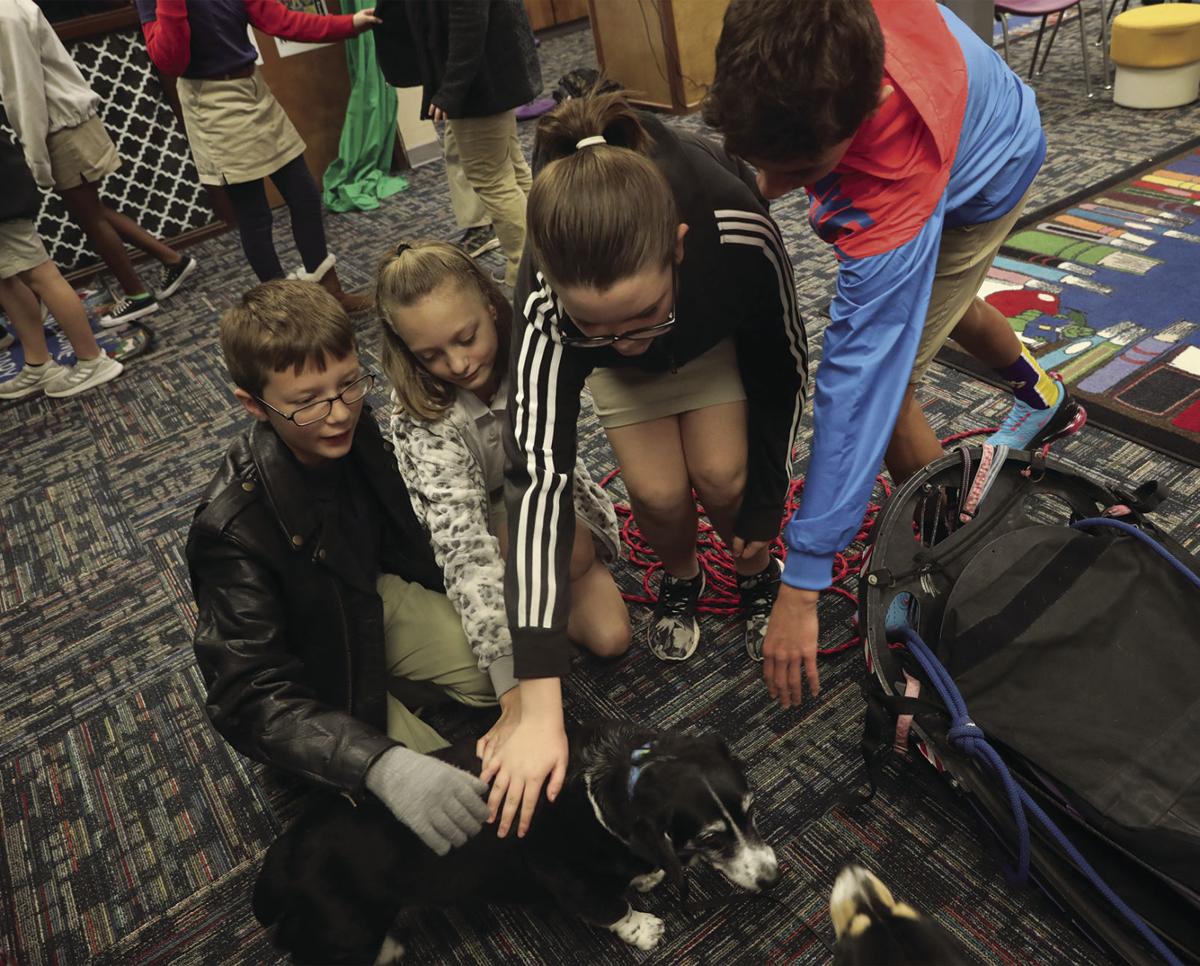 Karen Land, a writer, public speaker, and wilderness advocate, hugs a student during her visit to Live Oak Middle to discuss dog racing and the environment on Friday, Feb. 7, 2020.

WATSON -- While Karen Land talked about sub-zero temperatures, encountering animals in the wild, and an 1,100-mile race across a frozen landscape, the students had a hard time taking their eyes off Chloe.

A 13-year-old black and white Corgi-Springer mix, Chloe scratched her head and playfully rolled on her back to show her belly, drawing a collective drawn-out “awwww” from many of the students seated on the floor inside the Live Oak Middle library.

Land, a three-time participant of the famous Iditarod Trail Sled Dog Race in Alaska, has given more than 1,000 talks to thousands of students in 26 states. And every time, Chloe loves to be a distraction.

“The only way she stops is if I give her food,” Land said with a laugh. “She’s training me.”

Chloe eventually sat still long enough for Land to deliver an engaging talk about the sport of dog racing during a memorable visit to Live Oak Middle on Friday, Feb. 7.

Along with Chloe, Land also brought Noggin, her lean, long-legged 9-year-old Alaskan Husky, and much of her racing gear, including the sled she races with.

Though it fit comfortably inside the LOM library, the sled and the “string of dogs” can get quite long, Land said, as her beloved canines take her across snow-covered land and frozen-over lakes “as if they were highways.”

“If I place my sled under a basketball goal in a gym, the dogs at the front would almost reach the other basketball goal if the line was stretched out,” Land said. “That’s a long line of dogs.”

During the talk, Land spent most of the time explaining the Iditarod Trail Sled Dog Race, an annual long-distance sled dog race held entirely within the state of Alaska. It begins in Anchorage, where thousands of well-wishers line the streets to send the racers on their way, and goes northwest to Nome, with 22 checkpoints along the way.

Throughout the marathon, mushers and their dogs encounter a variety of obstacles, such as avalanches, blizzards, gale-force winds, and frozen bodies of water — not to mention “stubborn” animals like moose and bison that rarely step aside.

But according to Land, the dogs love every minute of it.

“Sled dogs are based on enthusiasm and joy,” she said. “The way we get them is by desire. And the dogs are silent when they run. There’s hardly any barking. It’s actually very peaceful out there.”

“They’re bred specifically for this race,” Land said later. “We’re breeding them for endurance, intelligence, and to get along. You don’t want to have that many dogs together who don’t get along.”

Land first participated in the Iditarod race in 2002, finishing in 49th place out of 62 teams. It took Land and her team of 16 dogs two weeks to complete the race — in which the days are short, the temperatures are low, and the conditions are rough.

During her first race, Land and a friend almost missed the Iditarod banquet, held at the end of the race to celebrate the year’s mushers and their dogs who completed the grueling journey.

Fortunately, they made it just in time, though Land said they were probably a tad underdressed.

“We walked in wearing the same clothes we had been in for 14 days,” she recalled. “And we hadn’t showered for 14 days, so it was pretty nasty.”

Land has competed in the Iditarod race three times, though she races in several smaller races throughout the year in addition to training in Montana. And though the starting and stopping points of the Iditarod are always the same, the race never is.

“You cover so much ground, and things can happen at any moment,” she said. “Sometimes you have to avoid avalanches or holes in the ice. You just never know what’s going to happen out there.”

According to Land, sled dogs can run 100 miles a day and burn an average of 10,000 calories, meaning mushers must have enough food to keep their canines on their feet. Land said her backpacks and pockets are always stuffed with meat and other doggie treats, ready to pass out at any moment.

“Sledders are gross,” she joked. “I’m like a walking grocery store in their eyes.’

During her visit, Land also showed students what she wears to combat the below-freezing temperatures — and the results had the students rolling in laughter.

In the first talk, Land dressed up Sarah Hurt in her sled gear, covering the sixth-grader from head to toe in clothing meant to keep a person warm while speeding through the brutal Alaskan elements.

Though she didn’t pull out her customary three layers of underwear, Land draped Hurt in a large bodysuit, strapped on what sledders call “Mickey Mouse boots,” placed a neckie over Hurt’s face, and then a hood over the neckie.

But she wasn’t done yet — after all, her clothing alone usually adds 50 pounds to the 200 or so pounds the sled dogs are pulling.

Land then placed a thick jacket over Hurt, followed by a large pair of leggings (“I have three more pairs if I need them,” Land said), another bodysuit for when sledders sleep, a pair of gloves, and then a pair of beaver mittens.

“They’re giant, and they’re really warm,” Land said of the mittens. “It’s like I have a beaver on each hand.”

Land said her ultimate goal is to compete in the Yukon Race, a 1,000-mile journey from Fairbanks, Alaska, to Whitehorse, Yukon, that is considered the toughest dog race in the world. The route runs on frozen rivers, over four mountain ranges, and through isolated northern villages, and racers encounter minus-60 degree temperatures and winds up to 50 miles per hour.

“It’s a tough race,” Land said. “But with some training, I know my dogs will be up for the challenge.”