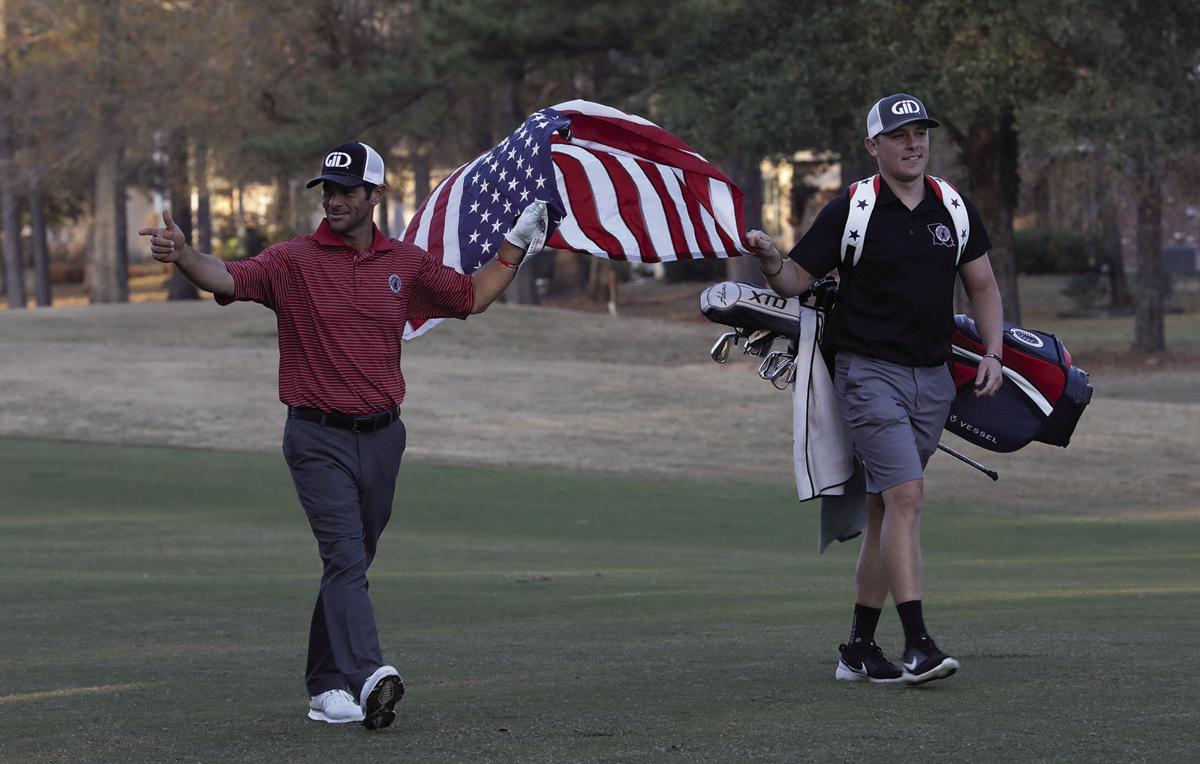 Yancy Methvien, left, and friend Cody Nunn carry an American flag as they head to the 18th green at Carter Plantation Golf Course on Saturday, Dec. 14, 2019. Methvien, a veteran, broke the Guinness World Record for the most rounds of golf played walking in a single year. 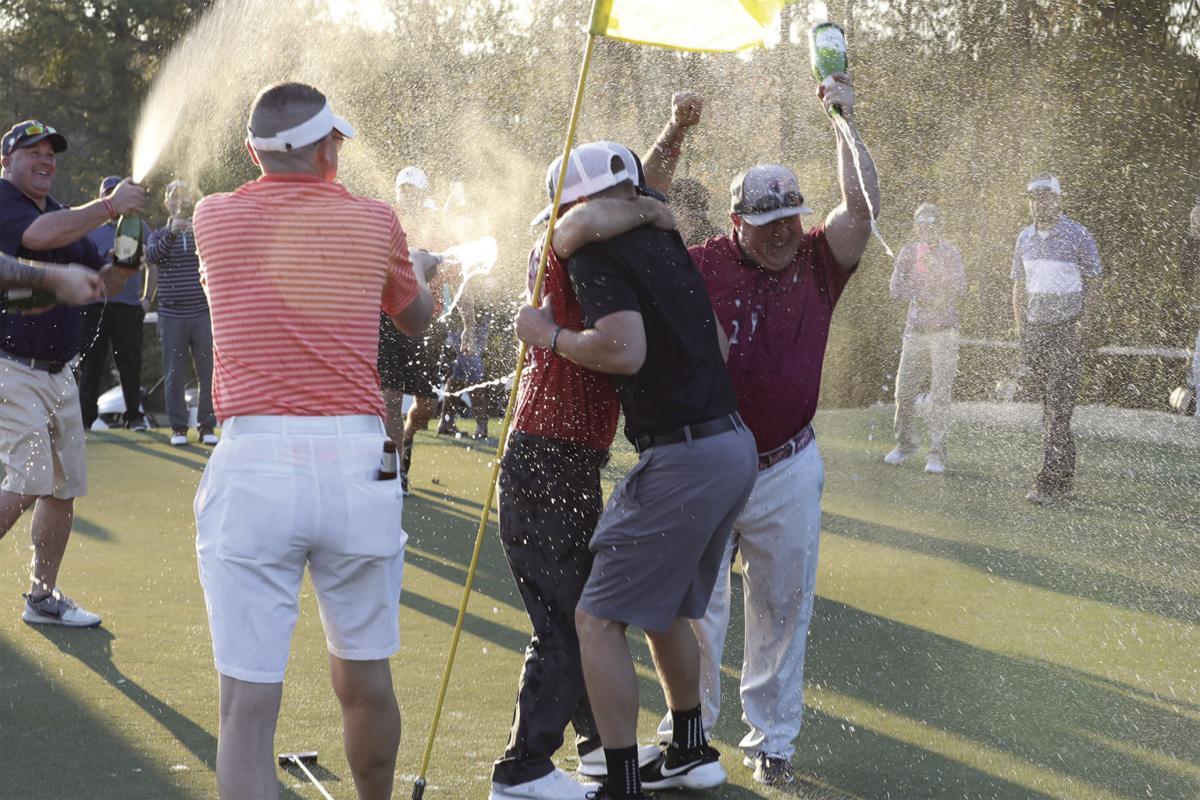 A celebration ensues after Yancy Methvien broke the Guinness World Record for the most rounds of golf played walking in a single year at Carter Plantation Golf Course on Saturday, Dec. 14, 2019. 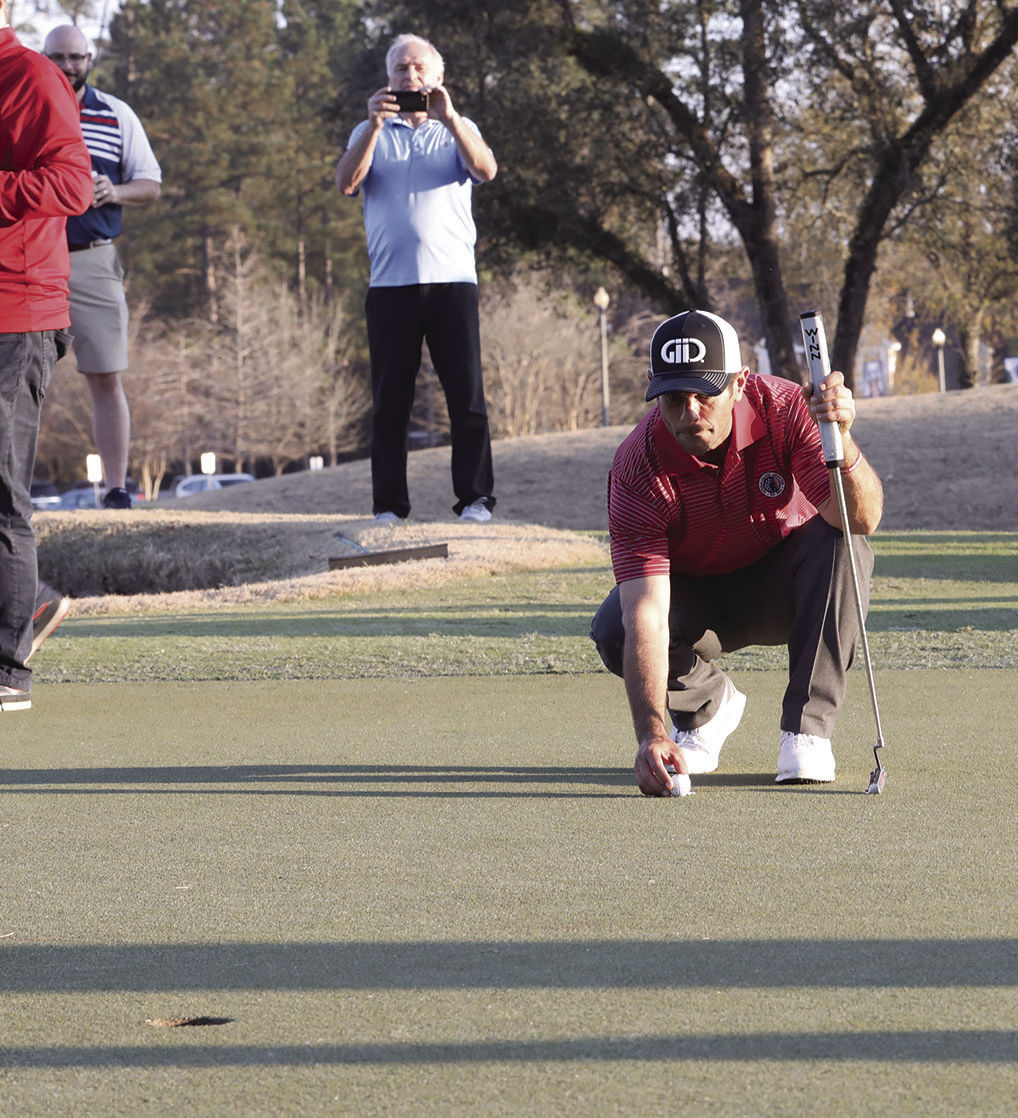 Yancy Methvien gets ready to putt on the 18th green at Carter Plantation Golf Course on Saturday, Dec. 14, 2019. Methvien, a veteran, broke the Guinness World Record for the most rounds of golf played walking in a single year.

SPRINGFIELD -- Yancy Methvien slowly made his way to the tee, ready to finish a journey that started one year before.

With dozens of golf carts and spectators surrounding him at Carter Plantation, Methvien grabbed his club, took a few practice swings, and placed his ball on the tee, ready to launch the ball into the air.

But before he did, he needed a moment to himself.

Methvien bowed his head and pulled his hat low over his face, the emotions of the past 12 months — during which Methvien had walked countless miles to raise awareness for veterans struggling with post-traumatic stress disorder (PTSD) — sweeping over him.

As he neared the world record that was now within reach, Methvien said three words under his breath.

“One more time,” he muttered to himself, wiping away a tear.

After that, he swung. Minutes later, he was a world-record holder.

Methvien, a Springfield native, broke the Guinness World Record for most rounds of golf played while walking in a single year during an emotional round on the Carter Plantation golf course on Saturday, Dec. 14, 2019.

With friends and family watching his every move, Methvien, a military veteran, teed off on the 18th hole and slowly made his way to the green. At one point, he and his friend, Cody Nunn, held an American flag as they walked.

They eventually made their way to the green, which was dotted with tiny American flags. After lining up his shot, Methvien took a few breaths and walked to the ball, eyed the hole, and gently swung.

The ball dropped into the bottom of the cup.

Methvien’s putt set a world record, which simultaneously set off a wild celebration. Methvien’s friends mobbed him on the green, uncorking bottles of champagne and spraying everyone in sight. Soaking it all in was Methvien, who grabbed a bottle and took a long gulp.

“That was probably the hardest round of golf I’ve played in my life,” he said, his red polo shirt drenched in champagne.

Methvien hugged friends and family, shook hands, and took countless photos to commemorate the moment. It was precisely how he had envisioned it more than a year before, when he first dreamed about going for the world record while standing inside his shed.

“It’s not very often you get to have a dream come true,” he said.

For Methvien, his dream is what helped him overcome his nightmares.

Methvien served in the military for 15 years, leaving on a medical retirement in 2015. He served in the National Guard for six years until Hurricane Katrina, took an honorable discharge for about a year, and then enlisted in the Coast Guard.

He said the most trying part of his service came during Hurricane Katrina, which he described as “one of the worst things I had ever seen.” Though he wouldn’t go into great detail, Methvien said he started having “night sweats and nightmares” as the PTSD took hold over his life.

That’s when he found the sport of golf.

Methvien began playing golf about 14 years ago, shortly after his grandmother, a champion golfer, passed away.

His first golfing excursion came when some buddies brought him to a Par 3 course for a friendly round. It became apparent rather quickly that Methvien was not on par with his friends.

“They beat my ass like a drum,” Methvien said with a laugh. “And I was the most athletic one of the bunch. So I said, ‘That’s not going to happen again.’”

Eventually, golf became more than a competitive outing for Methvien. It became the only place he could truly relax from his PTSD, something US News said roughly 1 out of every 5 veterans struggle with.

“With golf, it doesn’t cure it all, but it puts me in a much more relaxed environment, and that relaxation trails into regular life,” he said.

In November 2018, Methvien said he was standing in his shed when he had a vision of breaking the world record of 878 rounds of golf walked in a single year. After talking to a few buddies, he then decided to go for it, with his first round coming on Jan. 1, 2019.

Methvien usually played two or three rounds a day at around 20 golf courses, though he mostly played at Brookhaven Country Club in Mississippi. For Methvien, the long walks between shots offered time to reflect, and by doing so, to heal.

“You have a lot of time out there to think about anything else but golf, and you can analyze a lot,” he said. “I ended up going back through my life and thinking about all the conversations I had with people and how I could’ve made that better. I thought about all my friends, family, people that I’ve loved, people I’ve lost.

“It was one of the best years of my life. It was emotional in a lot of ways, but it was worth it. Now I just want to be better and make other lives better.”

Along with enlisting in the military, Methvien said breaking the world record is his proudest accomplishment. He hopes it’ll shine a light on veterans struggling with PTSD, though he encouraged everyone to find something that helps them overcome the daily obstacles they face.

“Whether you’re a veteran or not, find your golf,” he said. “Find what makes you happy, put that in your life, and your life will be better. And if you can find a way to help others with it, do it. That’s all I ever wanted to do. That’s why I joined the military, and that’s why I did this.

“I had my own things to deal with, and I feel that I’m a better person after this year. I’m more capable of dealing with my day to day life. For me to have that feeling — and I was pretty low — I know if other veterans and people find their golf, it will make a difference in their lives, too.”