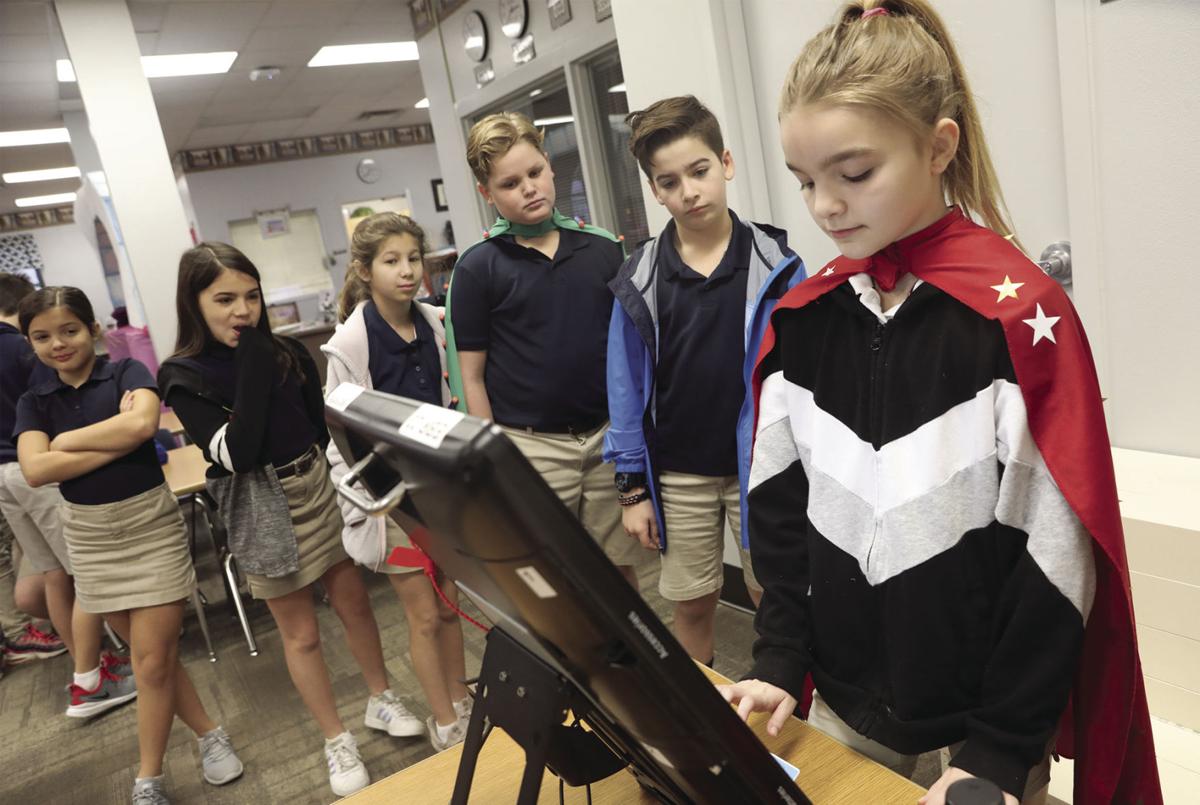 Students in Karly Robertson’s fifth-grade class at Seventh Ward Elementary get ready to cast votes for their favorite book in the Louisiana Young Readers Choice Award contest on Friday, Jan. 31, 2020. 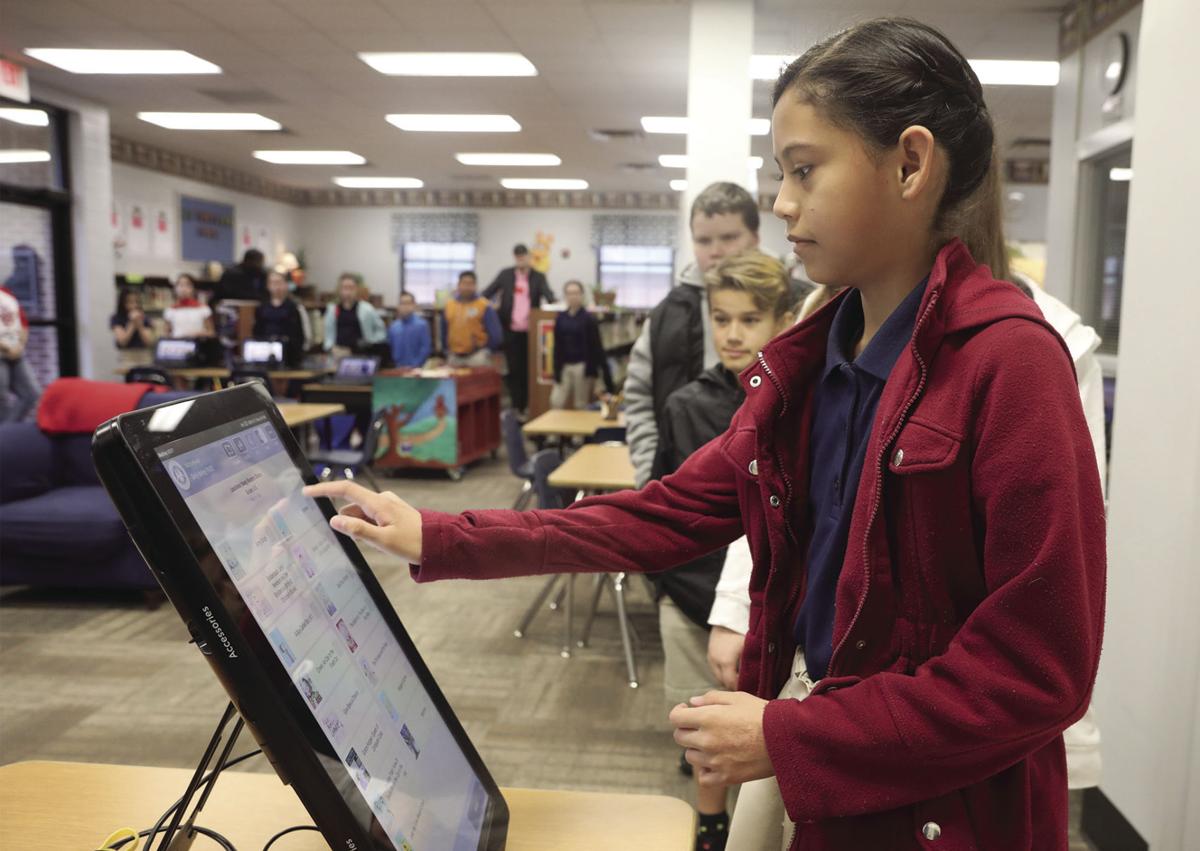 A student in Nicole McElroy’s fifth-grade class at Seventh Ward Elementary gets ready to cast a vote for the Louisiana Young Readers Choice Award contest on Friday, Jan. 31, 2020. 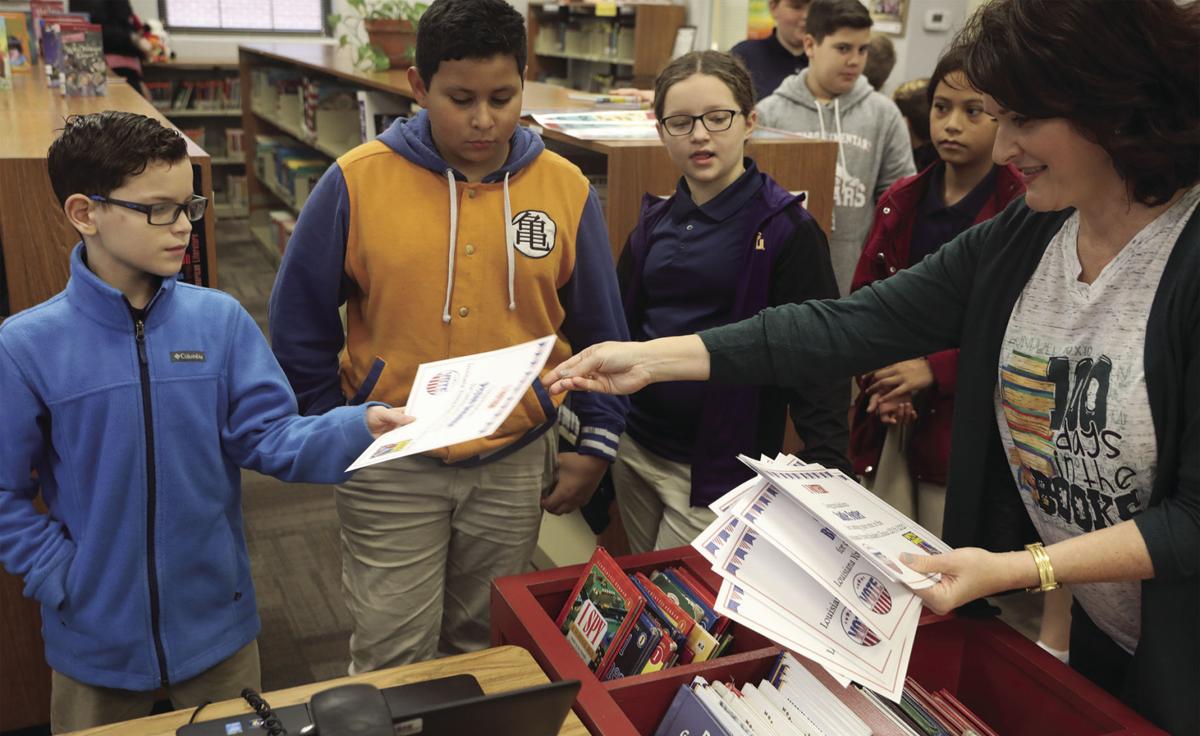 DENHAM SPRINGS -- They fidgeted in line, eager to cast their ballot.

Some needed only a few seconds to make their selection, while others had to think about their choice for an extra minute or two.

Some were given “I Voted” stickers after leaving the voting station, and others were given patriotic certificates symbolizing what they had just done.

Using real voting machines, students across the state have been performing one of the pillars of American society in recent weeks.

Students across Livingston Parish and throughout the state are hitting the polls to make their selections for the Louisiana Young Readers’ Choice (LYRC) program, which allows students to use real voting machines provided by the Secretary of State’s office to vote for their favorite books of the year.

Now in its 20th year, the enrichment program is designed to instill the importance of both reading and voting among students in grades 3-12, according to a press release. Under the umbrella of the State Library of Louisiana, the program is broken up into three grade levels — 3-5, 6-8, and 9-12 — and puts at least 10 books on the ballot for students to choose from.

Participation in the program has climbed much since it was introduced in 1999, going from 5,485 votes the first year to as many as 24,000 votes two years ago. In some years, Louisiana students read more than 73,000 books and cast more than 29,000 votes.

Several Livingston Parish schools will have taken part in the program when the polls officially close March 1 — of the 100 or so schools participating across the state, nearly 10 are from the Livingston Parish Public Schools system.

After the third, fourth, and fifth graders at Gray’s Creek Elementary cast their ballots, the winning book was Judy Sierra’s “Imagine That!: How Dr. Seuss Wrote The Cat in the Hat,” a picture-book biography about the beloved children’s author. At North Corbin Junior High, students selected “Insignificant Events in the Life of a Cactus” by Dusti Bowling as their top pick.

After approximately 70 students at Live Oak Middle voted, the winning choice was also Bowling’s book, with librarian Amanda Jones posting the results on Twitter. It was quickly picked up by the children’s author herself, who responded to Jones’ tweet by saying, “I’m so honored! Thank you Live Oak!!”

At Seventh Ward Elementary, Nicole McElroy’s class was the first to arrive to vote, with students entering the library a little after 8 a.m. on Friday, Jan. 31. Following McElroy’s class, students under teacher Karly Robertson arrived to make their selections.

A librarian for more than 20 years, Millet said she spent recent days explaining the voting process to students, talking about the importance of giving serious thought to their selections and to avoid letting others influence their decisions.

It all came to life Friday morning inside her library, where representatives from the Secretary of State’s office set up the voting machine for around 40 students to make their selections.

“The kids get so excited about voting on a machine,” said Millet, who in years past used paper ballots for students to make their book-of-the-year choices. “It makes it more real to them.”

After tallying up the votes, the top pick among Seventh Ward Elementary students was Melissa Savage’s children’s book “Lemons,” which follows the story of a young girl named Lemonade Liberty Witt who is forced to live with a grandfather she’s never met after her mother passes away.

Most of the students cheered when Millet announced “Lemons” as the winning book, though a few playfully groaned that their selection wasn’t the top choice.

“Just like a real election,” Millet said with a laugh.