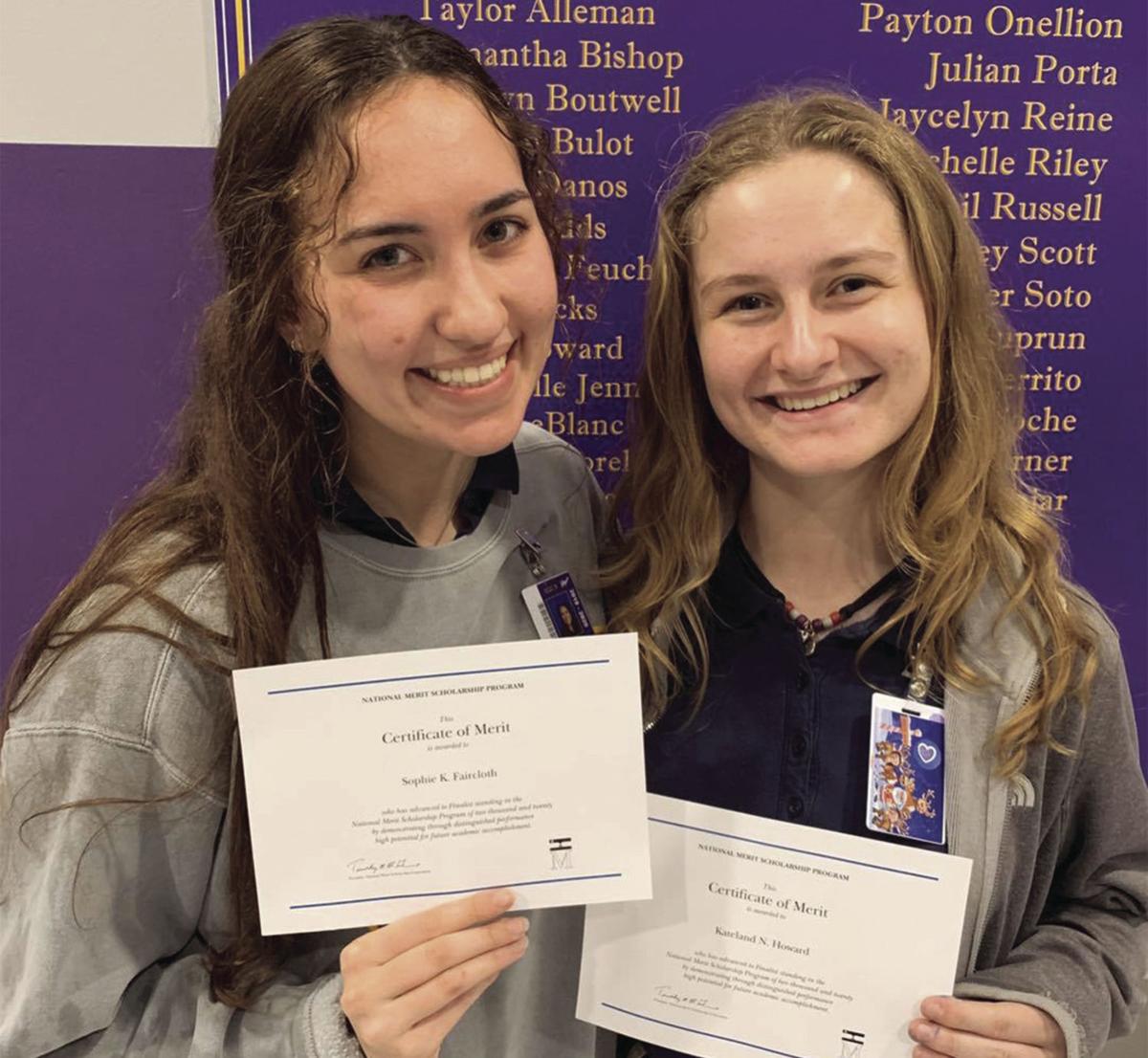 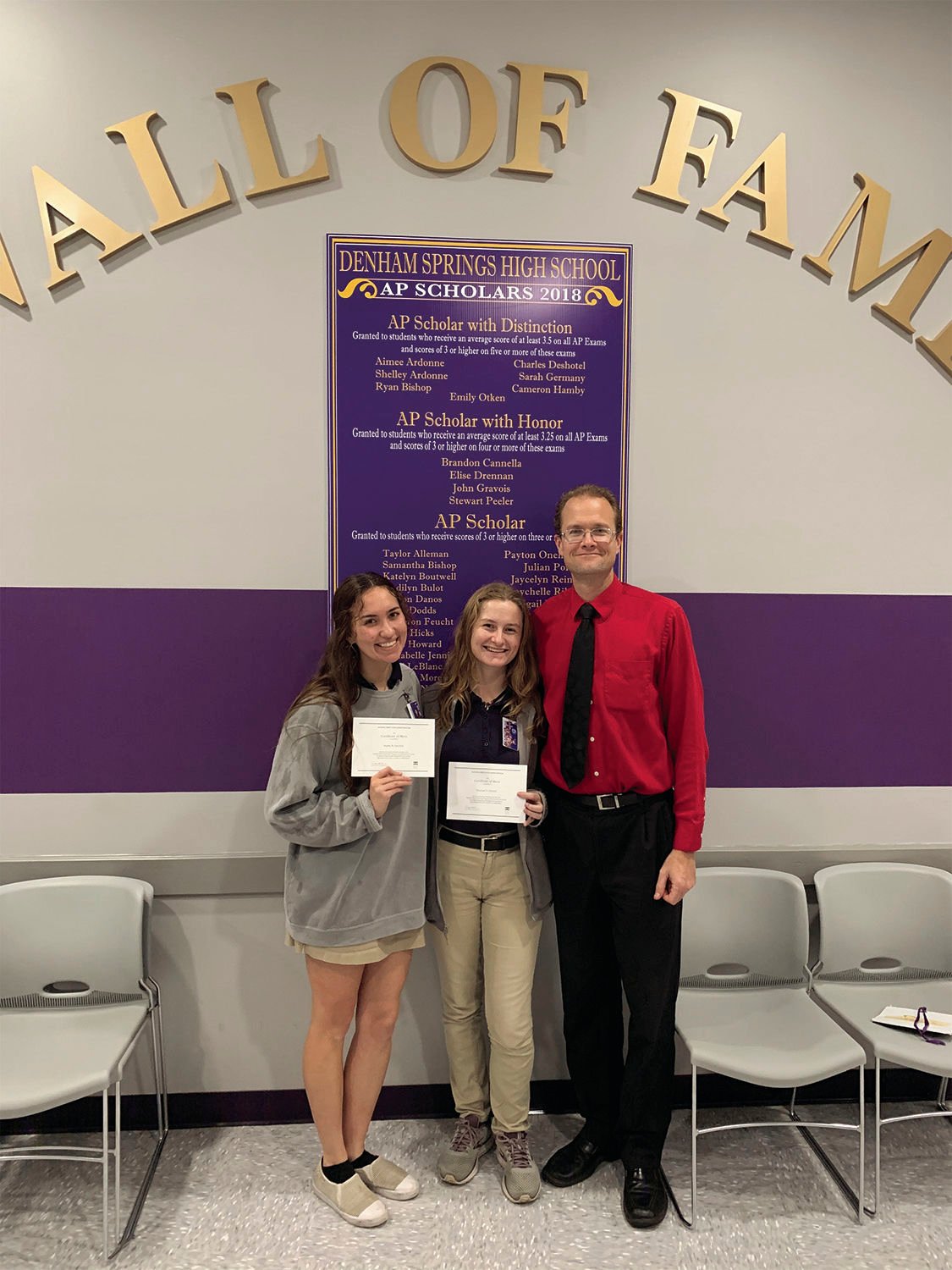 DENHAM SPRINGS -- Having one National Merit Scholarship Finalist is enough to make any school proud.

But having two? That’s cause for a celebration — and exactly where Denham Springs High School finds itself.

The winning students will be announced starting in March, when representatives from the National Merit Scholarship Program (NMSP) will notify approximately 7,500 finalists at their home addresses that they were selected to receive a Merit Scholarship award.

“Denham High would like to extend the highest of congratulations to Sophie Faircloth and Katie Howard for their prestigious recognition as National Merit Scholar Finalists,” the school said in the post.

Like the thousands of other NMSP finalists, Faircloth and Howard have kept plenty busy during high school.

Katie Howard is the daughter of Wes and Robin Howard, both administrators in Denham Springs public schools. She has two siblings, Elizabeth and Laura, and has been a resident of Denham Springs for 16 years after her family moved from Baton Rouge.

Katie has a cumulative 4.75 GPA and scored a 35 on the ACT, with a perfect score of 36 in English. After high school, Katie hopes to attend the Massachusetts Institute of Technology (MIT) or Harvard to major in biological engineering. Her dream is to go to medical school to do stem cell research.

Outside of the classroom, Katie is a member of the Denham Springs High School Wind Ensemble, where she is a marching band captain, a principal player, and a section leader. She is also a member of United Sound, a non-profit that teaches special needs students how to play music, as well as Louisiana Stars Drum and Bugle Corp, which performs in international competitions.

Additionally, Katie is involved with the National Honor Society, plays the piano, and is an artist outside of school.

Sophie Faircloth, the daughter of Annette Faircloth, has been a Denham Springs resident for seven years, after her family moved from Florida. She has two older brothers, Chad and Toby.

Like Katie, Sophie also scored a 35 on the ACT, with perfect scores of 36 in the English and reading sections. She also scored in the 99th percentile nationwide on the SAT.

Sophie’s extracurricular activities at school include being a member of the volleyball team, the DSHS Wind Ensemble, the Senior National Honor Society, DSTV Media, and Jackets Against Destructive Decisions (JADD). In her spare time, she volunteers at North Oaks Hospital and Rehabilitation Center.

Outside of school, Sophie is also involved with United Sound and the Louisiana Legislative Youth Advisory Council.

A 2019 AP Scholar with Distinction, Sophie has already accumulated 18 hours of college credit and could have another 18 after this school year.

After high school, Sophie plans to attend the University of Pennsylvania (UPenn), a private Ivy League research university where she’ll major in cognitive science and economics. She hopes to be a college professor.

“I want to focus my life on making a positive change on the world,” Sophie said.

Sophie was named Denham Springs High School’s 2019-20 Student of the Year. Katie was a finalist for the award.

To enter the competition, a student must take the PSAT test during his or her junior year of high school. From the 1.6 million students who met entry requirements, approximately 16,000 were selected as semifinalists. Merit Scholar semifinalists are selected on the basis of their skills, accomplishments and potential for success in rigorous college studies.

Since 1955, the National Merit Scholarship Corporation (NMSC) has recognized more than 3 million students and provided more than 423,000 scholarships worth in excess of $1.7 billion.