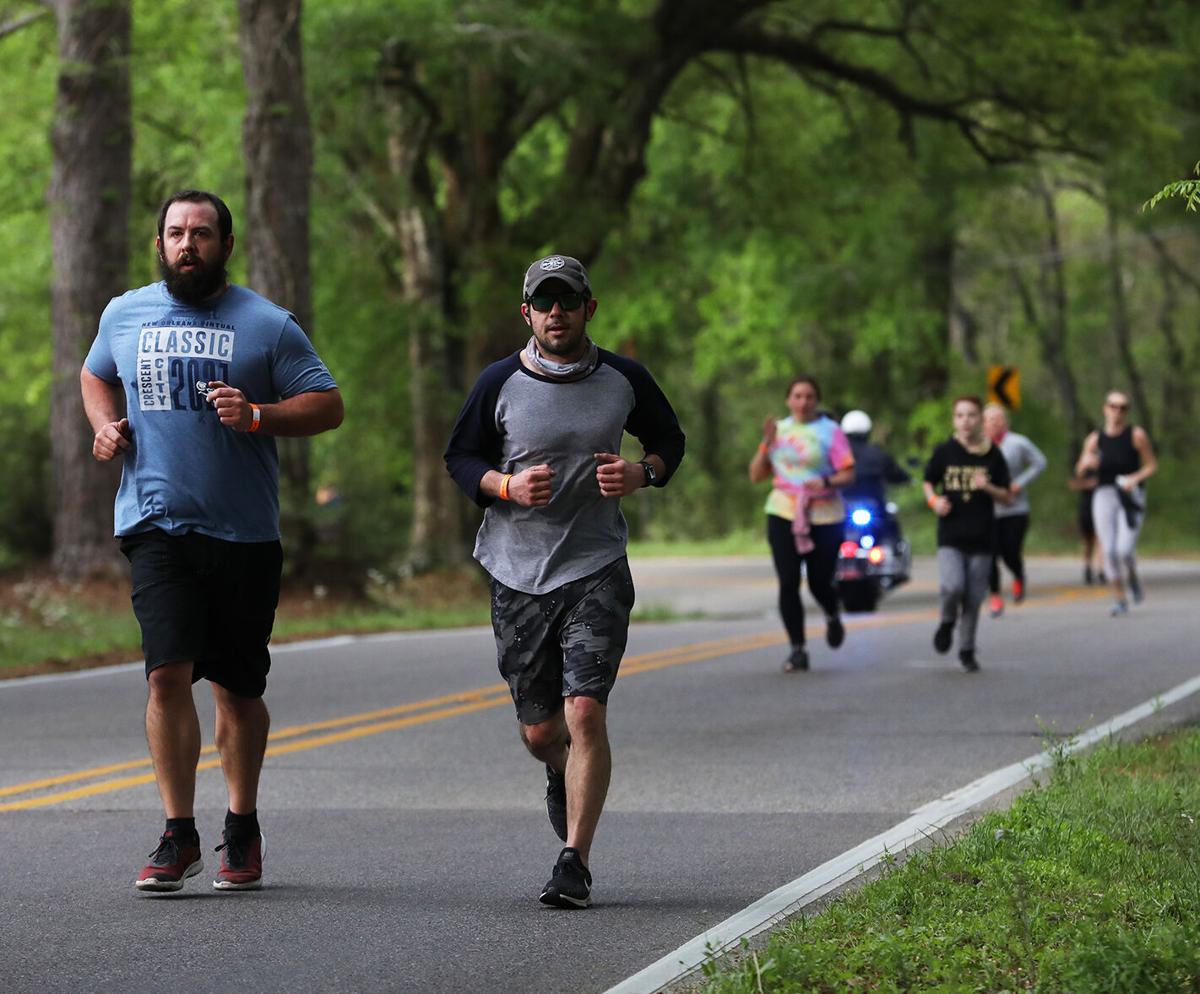 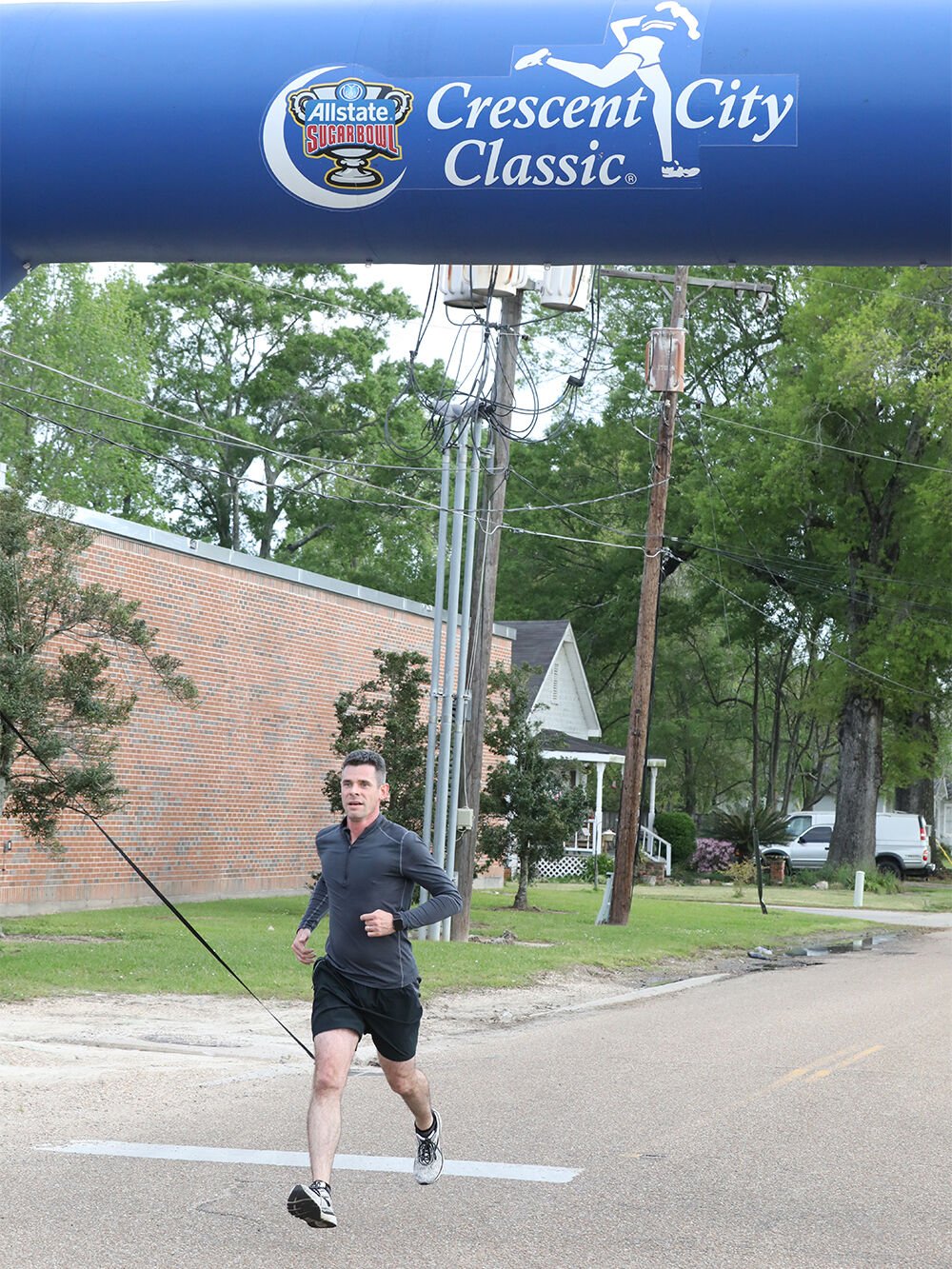 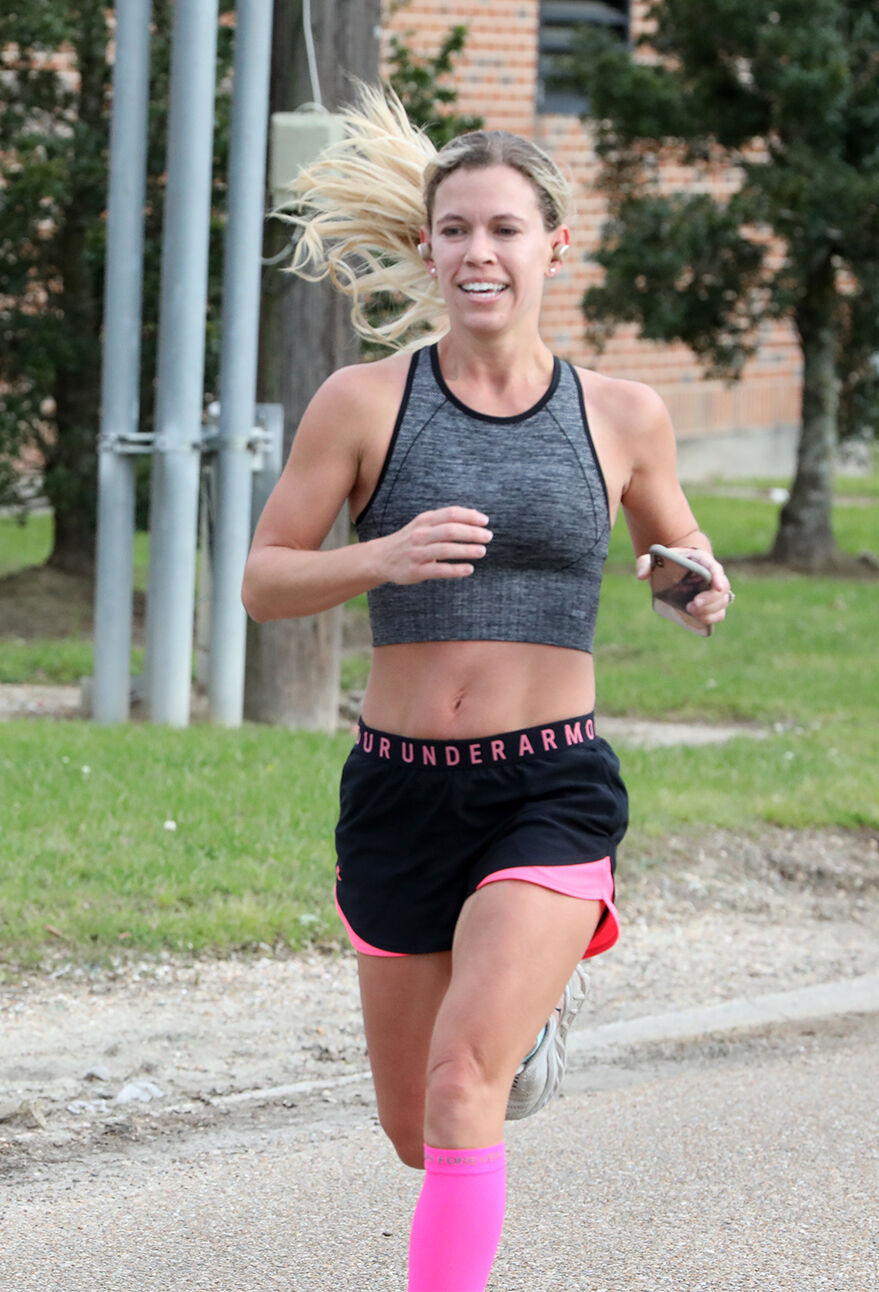 DENHAM SPRINGS -- After running the course the evening before, Josh and Geneva Compton spent last Saturday morning cheering on others as they completed the 6.2-mile run through Denham Springs.

While Josh shouted words of encouragement from a megaphone, Geneva hopped around in a pink Easter bunny costume, giving runners high-fives after they crossed the finish line.

“Of course I had to dress up,” Geneva joked at one point.

On a picturesque morning, around 100 runners took part in the Le Chien Running Club’s iteration of the annual Crescent City Classic 10K, one of New Orleans’ signature events, on Saturday, April 3.

The majority of the fun run took place on River Road, where runners of all ages trotted back and forth in the city’s first in-person run since the start of the coronavirus pandemic.

Participants received medals, T-shirts and “goodie bags” filled with coupons and other gifts from businesses in downtown Denham Springs. Using an official GPS race timing app called Race Joy, participants were also able to compete for one of the coveted Crescent City Classic posters. As in the past, posters will be awarded to the top male and female finishers when they are announced later this month.

Following the race, a day-long after-party was held at Le Chien Brewing Company, where runners enjoyed drinks, free food, and live music. Additionally, the Easter Bunny was also on hand to take pictures with children.

Several runners took to social media after the race to thank the organizers for putting on an event that brought people together. Hundreds of photos of the outing were later uploaded to Le Chien Running Club’s Facebook page.

“It was the perfect day for a race and everyone did awesome!” one person wrote.

The idea to host the Crescent City Classic came from members of the Le Chien Running Club, a group of running enthusiasts that formed last November and meets for a neighborhood run every Thursday evening. The club has “a wide range of members,” ranging from people who compete in ultra races to people just starting out.

It was after one of these weekly runs that Josh and Geneva Compton decided to reach out to Crescent City Classic Race Director Eric Stuart about hosting “a satellite hub” of the popular 10K in Denham Springs.

Like nearly all races over the last year, officials from the Crescent City Classic have had to convert their event to a virtual format in adherence to coronavirus restrictions.

“This past year, we had to do a lot of virtual runs because everything was shut down because of COVID,” Josh Compton said before the event. “It was good, but for runners, we like to be in person. So it’s been a tough year for runners.”

Many of the club’s members took part in the run Saturday, as well as others who are not affiliated with the group but were searching for an in-person run.

“Runners want to run in person,” said Bobbi Jo Guerin, one of the organizers for the event. “And with other runners.”

David Summers, a 36-year-old from Baton Rouge, said he usually does multiple marathons a year but hasn’t done as much as usual amid the pandemic. He recently participated virtually in the New York City marathon, running around Baton Rouge “through my own course,” but said it wasn’t the same as an in-person run.

“I wasn’t planning on coming [to the Denham Springs run] until I heard it was in person,” he said after the race. “I was instantly sold. Running is such a communal thing, and runners are the nicest people in the world.”

Summers was the first to cross the finish line on Saturday, completing the run in just under 45:50 — a time he said that should have been shorter.

“I took a wrong turn,” he recalled with a laugh. “And I knew it was wrong when my tracker said I was at 6.2 miles and nowhere close to the finish. I probably ran closer to 6.6 miles.”

Jennifer Nickens, a former cross country runner at LSU, was the top female finisher in the race, completing the run shortly after Summers. She said she and her husband have been running with the club on Thursdays and were “excited” to participate with them in the Crescent City Classic.

“Just running with other people is so much more fun and motivating,” Nickens said. “It’s not the same virtually.”