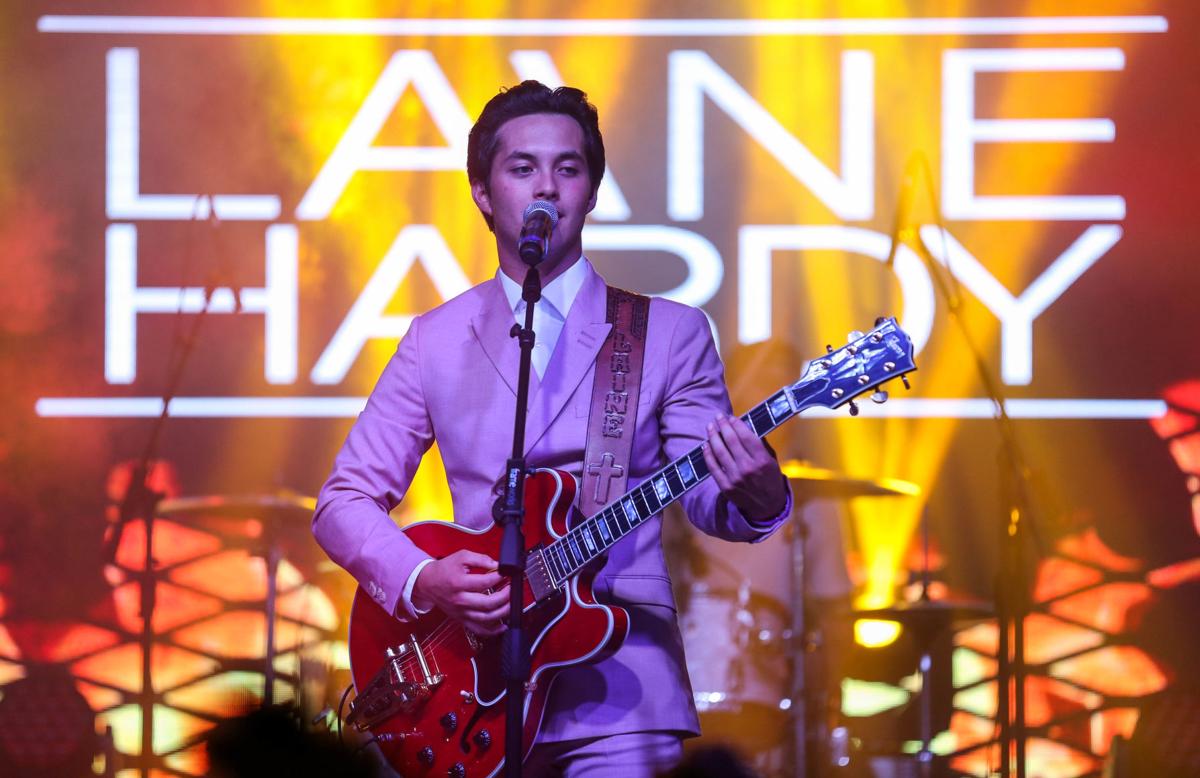 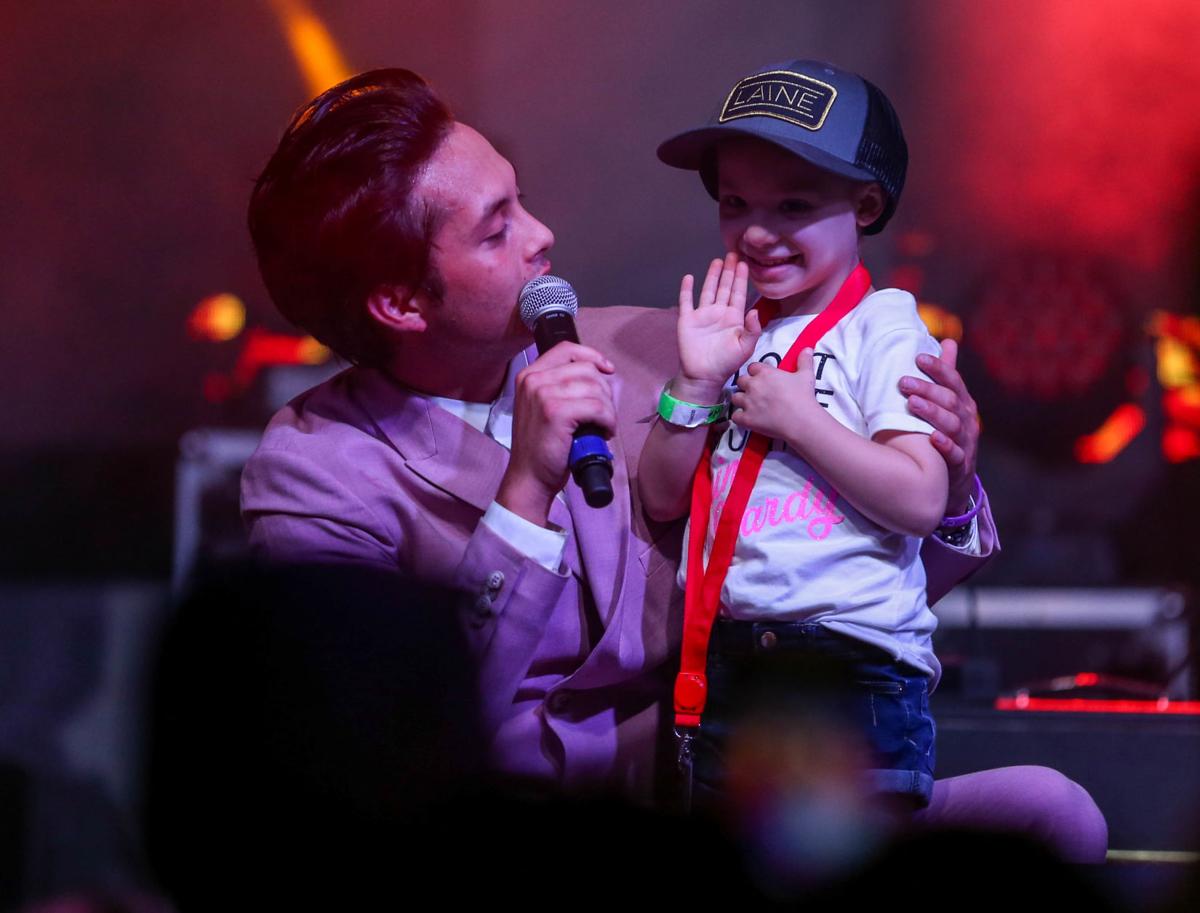 Laine Hardy performs his new song "Flame" to a young fan as part of the Laine Hardy Homecoming Concert at North Park in Denham Springs on September 28, 2019. 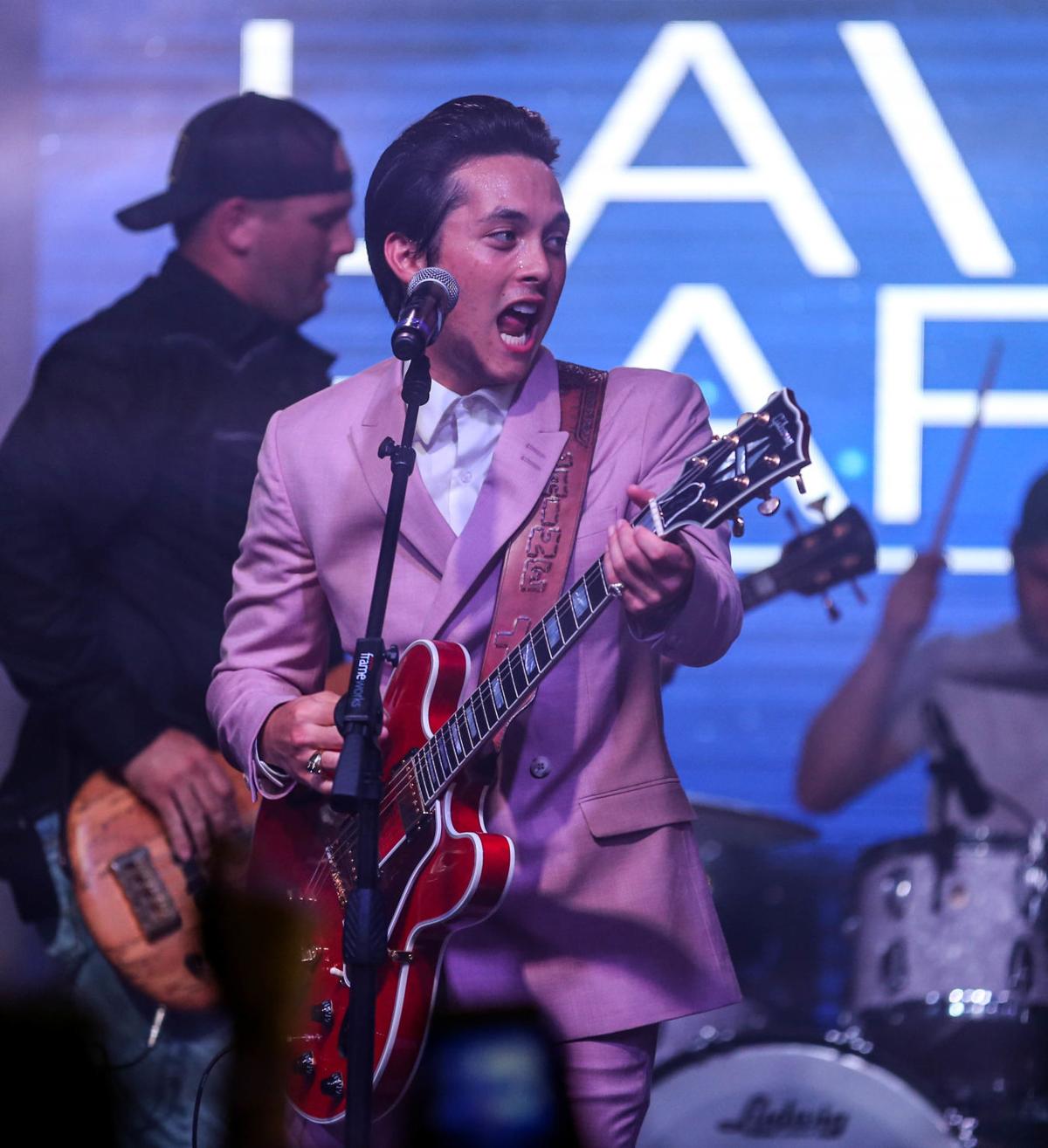 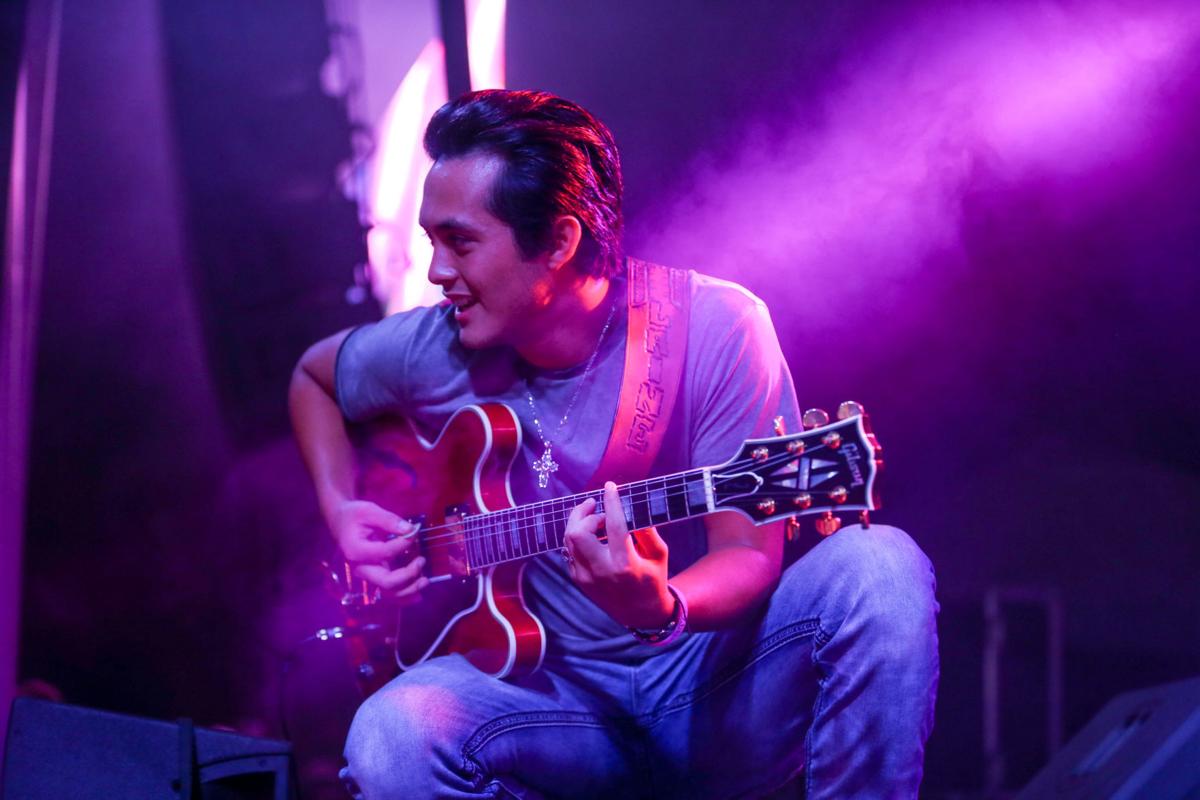 Laine Hardy sings to a group of people in the front row on Saturday during the Laine Hardy Homecoming Concert at North Park in Denham Springs on September 28, 2019. 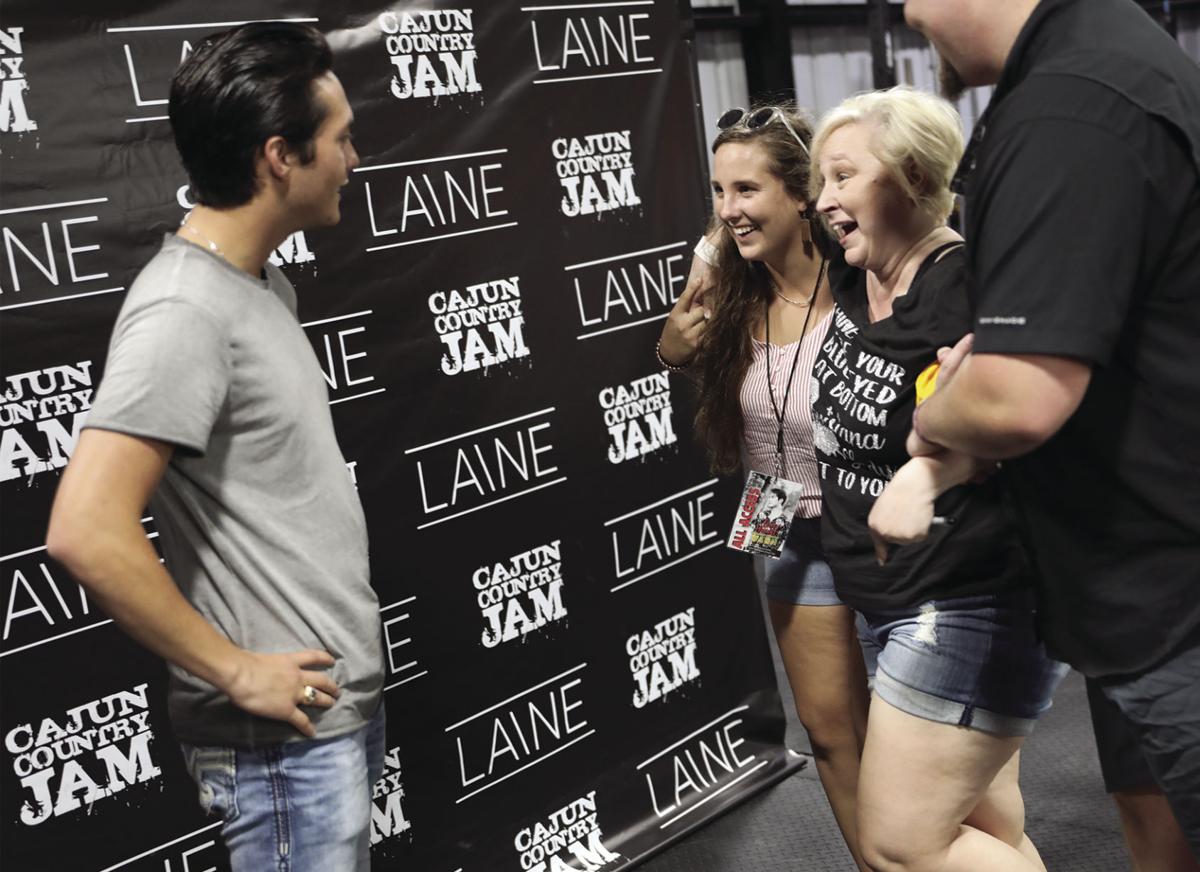 Laine Hardy meets a couple of fans during the Laine Hardy Homecoming Bash on Saturday, Sept. 28.

DENHAM SPRINGS -- The Bayou Boy was back at home.

And it was a homecoming he’ll never forget.

American Idol winner Laine Hardy officially kicked off his nation-wide tour when he took the stage at North Park in front of thousands of adoring fans, capping off an unforgettable day of music in Denham Springs on Saturday, Sept. 28.

After fans waited 30 minutes longer than scheduled to see their hometown hero, Hardy received a rockstar welcome when he walked on the dimly-light stage to the screams of more than 5,000 fans. Many wore T-shirts and hats with Hardy’s face and name plastered across the front, while others held up hand-made signs showing their adulation for the 19-year-old singing sensation.

Cars began lining up outside North Park as early as 7 a.m., more than six hours before the show started and more than 14 hours before Hardy took the stage. The parking lots quickly filled up as people came from across the country for the show. Fans brought their own lawn chairs and shielded themselves from the hot temperatures by sitting under umbrellas.

It was a lot to take in for Hardy, who in the last two years has gone from a local singer to a national superstar with his own catchphrases, merchandise, and fan clubs — several of them, in fact.

But in typical Hardy fashion, the young singer was still taken aback by all the fanfare he received.

“That’s a lot of people,” Hardy said as he stared at the crowd.

Fans certainly got their money’s worth.

Hardy sang and jammed on a shining red guitar with his family band for more than 90 minutes, playing a variety of covers, original music, and songs he performed during his star-making run on Season 17 of American Idol.

He opened with The Marshall Tucker Band’s “Can’t You See” before playing “Louisiana Lady,” a song he wrote after his first run on Idol last summer. He also performed two songs he wrote in Nashville and at one point sang “Johnny B. Goode,” which he performed on Idol and during the “A Capitol Fourth” Independence Day celebration in Washington, D.C., this summer.

At one point, Hardy switched from his gray shirt and jeans into a hot pink suit that recalled his attention-grabbing wardrobe selections on Idol. Throughout the night, chants of “LAINE” could be heard from the neighborhoods surrounding North Park.

Directly in front of the stage was the “Hardy Party Pit” — a standing-room only area reserved for the most die-hard Laine Hardy fans. They held their phones up high and screamed with every move the star made as a dazzling light-and-smoke display emanated from the stage.

Near the end of the show, Hardy got off stage and walked among the crowd, giving his passionate fan hometown fan base one last, up-close glimpse of the star before he hits the road for a two-month tour.

Sitting in his tour bus prior to the show, Hardy explained what it’s like being on stage in front of a crowd.

“It’s the most unreal feeling you’ll ever feel in your life,” Hardy said. “The adrenaline you get on stage in front of a crowd of people is unbelievable. It don’t matter if it’s a crowd of 50 or 10,000. I love the feeling of being up there and people liking what I do.”

Do you still get nervous?

“Yeah, I get nervous,” Hardy answered emphatically. “If you ain’t nervous, why are you doing it?”

The homecoming bash, which featured a full slate of local performers in addition to Hardy, drew music lovers from all over the country, including some from as far and Maine and Hawaii, according to promoter Scott Innes.

One of those fans was Betty Robertson, who had never been more than four hours from home in Belton, Kentucky, but decided to make the 620-mile drive for the homecoming bash. On the way to Louisiana, she picked up two friends from Gatlinburg, Tennessee.

Robertson said she was introduced to Hardy when her mother — “as big a Laine fan as ever” — showed her one of his cover videos online.

“She saw it on Facebook a long time ago and knew I would like it,” Robertson said.

Robertson’s mother passed away in May, less than two weeks before Hardy was crowned this year’s American Idol. When the homecoming bash was announced, she knew she had to go and even paid for a meet-and-greet with Hardy prior to his set, one of hundreds of fans who shook hands and took a picture with the country singer.

During the concert, she wore a button with her mother’s picture.

Another fan who paid for the meet-and-greet was Ingrid King of Watson, who sprained her ankle earlier in the day but had no intentions of going home to nurse the injury. King was the first person to get a picture with Hardy, limping into the building before taking a picture with her favorite singer.

“I was not going to miss this,” she said with a wide smile before Hardy gave her a hug.

One of the most touching moments of the night came at the end when Hardy was greeted on stage by Ashlynn Carlock, a 6-year-old girl from Holden who is battling stage four kidney and double-lung cancer. Carlock’s story went viral in early September when a video of her meeting Hardy hit the internet, drawing millions of views.

When Carlock walked on stage Saturday, Hardy wrapped her in his arms and lifted her up while leading the crowd in a singing of his first single “Flame.” After the song, Carlock gave Hardy a framed picture from his visit to her home, a moment that had her mother Kim Pierson in tears.

“I love you,” Hardy told his young fan.

The emotional night set the stage for Hardy’s first headlining tour, one that’ll see him perform in 14 states from coast to coast and cover more than 10,000 miles. In two of the shows, he’ll perform with country superstars Toby Keith and Jimmie Allen.

This week, Hardy will return to Nashville “for some meetings” before heading to Charleston, South Carolina, for the second stop in his 17-show tour.

But before he left, he wanted to deliver a message to his fans, whom he credited for the life-changing success he’s enjoyed over the last two years.

“I just want to say ‘thanks,’” Hardy said. “I appreciate all the support. If I didn’t have it, I wouldn’t be here right now. The fans are what make me me and what makes me keep doing what I’m doing.

“I just appreciate all the love and support from everybody because that’s what keeps me going.”

DENHAM SPRINGS -- Less than a month after learning he was being inducted into the Louisiana Music Hall of Fame, local country singer Chase Tyl…

‘A fun ride’ | Exactly one year ago, Laine Hardy was crowned the winner of American Idol. Much has changed since.

Exactly one year ago, Laine Hardy almost blacked out.