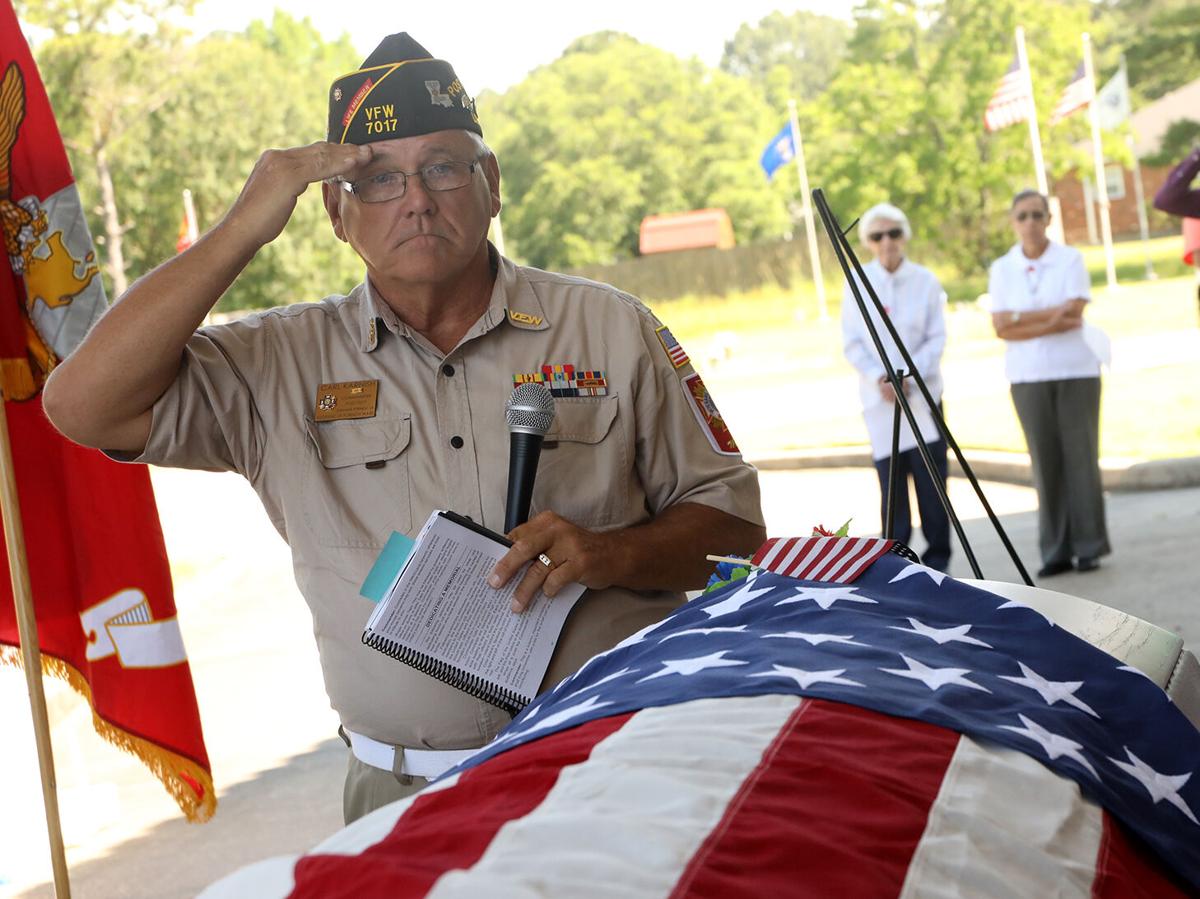 Carl Kurnish, a military veterans salutes a casket adorned with an American flag during a Memorial Day ceremony at Evergreen Memorial Park Mausoleum in Denham Springs on Monday, May 31, 2021. 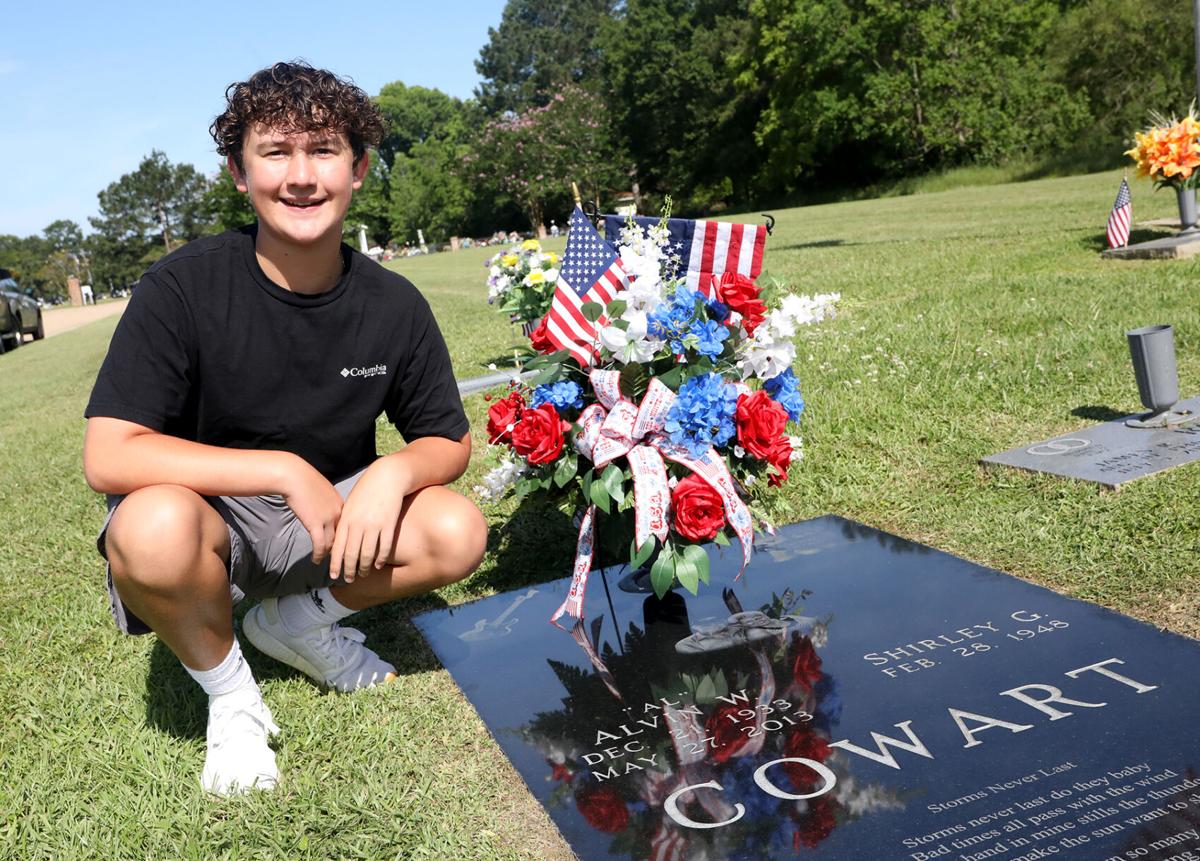 Gunner Ellis, 14, kneels down next to the grave for his grandfather Alvin Cowart prior to a Memorial Day ceremony at Evergreen Memorial Park Mausoleum in Denham Springs on Monday, May 31, 2021. 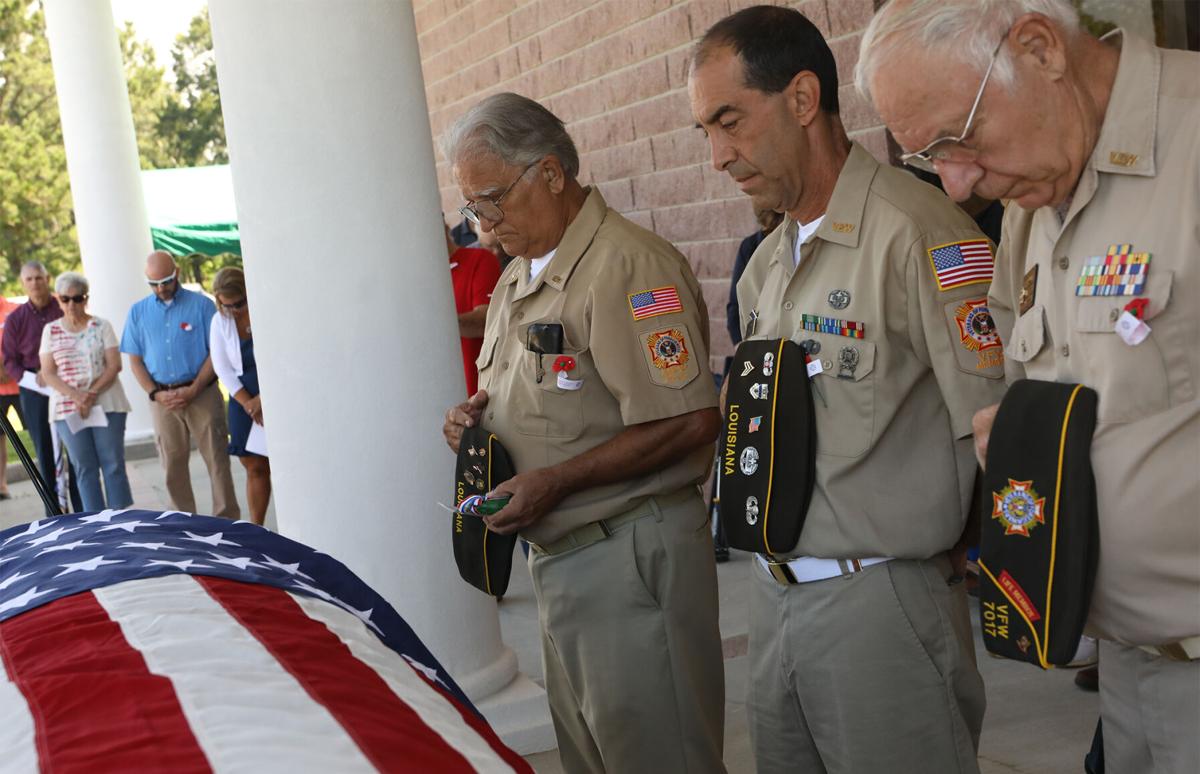 Veterans bow their heads in front of a casket adorned with an American flag during a Memorial Day ceremony at Evergreen Memorial Park Mausoleum in Denham Springs on Monday, May 31, 2021. 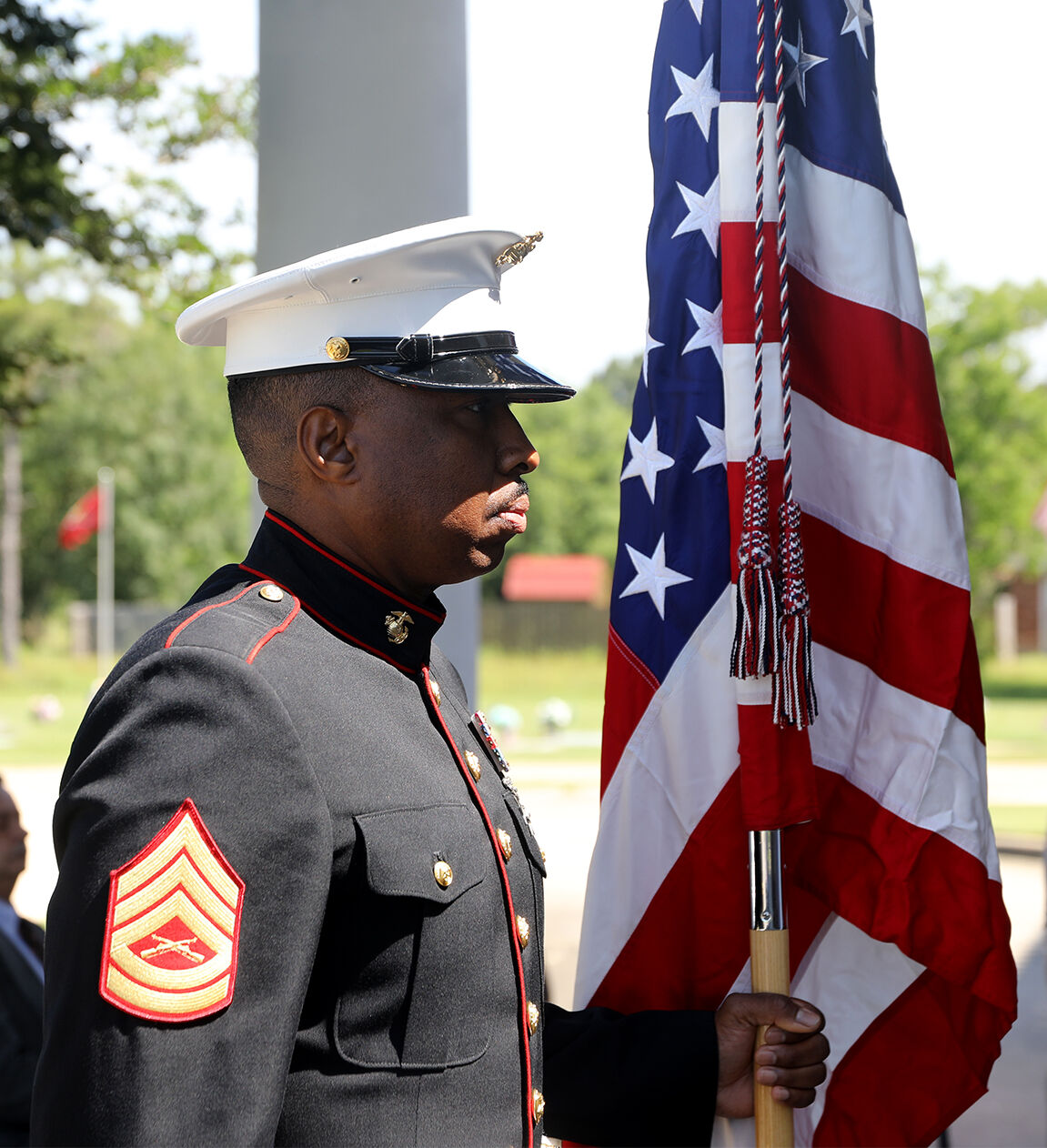 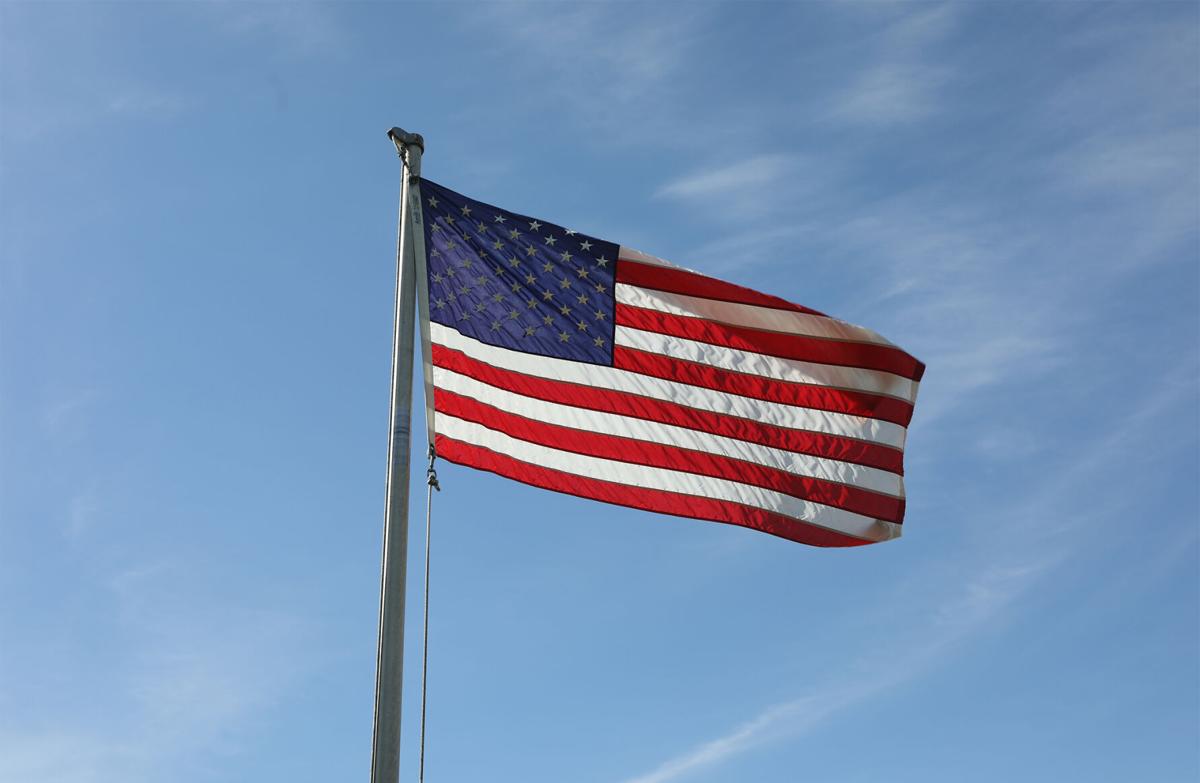 An American flag waves in the wind during a Memorial Day ceremony at Evergreen Memorial Park Mausoleum in Denham Springs on Monday, May 31, 2021.

DENHAM SPRINGS -- Near the back of Seale Funeral Home in Denham Springs, surrounded by waving American flags, are the graves of around 40 veterans of the U.S. military.

This section of the funeral home, titled the “Field of Honor,” was made around six years ago to show deceased veterans “the respect they’ve earned,” said cemetery manager Tracy Schexnaydre. Families come regularly to adorn the graves with patriotic decorations. Along with American flags, there are also flags representing all branches of the military.

One of the veterans lying in the “Field of Honor” is Alvin Wilton Cowart, a resident of Denham Springs who passed away in May 2013. Cowart served as a jet mechanic in the U.S. Air Force during the Korean War, and on this Memorial Day, two of his survivors came to pay their respects.

Shirley Didier, Cowart’s widow, and Gunner Ellis, his grandson, stood over the grave, which was now decorated with seven red, white, and blue balloons along with several tiny American flags and a patriotic flower arrangement.

Gunner, now 14, shared some fondest memories of his “Pawpaw Al” for a few minutes, recalling his grandfather’s humorous personality and his love for fishing and music.

“He was just a loving person,” Gunner said. “I miss him so much.”

Cowart and countless other veterans who have died were remembered during this year’s Memorial Day festivities, which saw a greater return to normalcy after in-person ceremonies were mostly cancelled last year due to the coronavirus pandemic.

On a bright sunny day, dozens of people from the Denham Springs community gathered at Evergreen Memorial Park Mausoleum to honor “all the departed comrades” during a ceremony on Monday, May 31.

The Memorial Day service included community leaders, veterans, and other Livingston Parish residents. Those in attendance ranged from young children to seasoned veterans.

The ceremony marked the 12th year the Veterans of Foreign Wars Post 7017 in Denham Springs held its Memorial Day service behind Seale Funeral Home, which was filled with large and small American flags.

Denham Springs Mayor Gerard Landry and Livingston Parish President Layton Ricks spoke during the ceremony, as well as VFW Commander Carl Kurnish. Other members of the local VFW Post and Ladies Auxiliary also shared some words, and a few placed flowers and a wreath near a casket representing “the many departed comrades who served in all wars.”

The casket was draped in a large American flag, one of many that were proudly displayed on the funeral grounds.

“[Memorial Day] is not just a day for going to the beach or having a picnic,” said VFW Quartermaster Vance Sutton. “It’s to honor those who gave the ultimate sacrifice for their nation and their flag.”

This Memorial Day felt closer to those before the pandemic, with nearly all COVID-19 restrictions having been lifted in Louisiana in recent weeks. Around the state, the public was able to pay tribute to fallen troops in ways that were impossible last year, when restrictions were in effect for all 64 parishes.

In Baton Rouge, thousands of small flags were arranged in front of the State Capitol, covering the grounds in a sea of red, white, and blue meant to symbolize “those who gave the ultimate sacrifice.”

All 11,000 flags will stand in front of the State Capitol for the entire week.

Gov. John Bel Edwards, a veteran of the U.S. Army, shared a video thanking “all the men and women who have answered our nation’s call to serve” and said Memorial Day is a time to “acknowledge that freedom does not come freely.”

Edwards also urged people to pray “for loved ones at home and abroad” and described all servicemen and servicewomen as “true heroes [who] deserve our gratitude each and every day of the year.”

In Denham Springs, visitors were given palm-sized replicas of the poppy, the official memorial flower of the Veterans of Foreign Wars of the United States. Poppy flowers are now used to raise money for veterans assistance programs nationwide, something the VFW Post in Denham Springs has contributed to for years.

A little after 10 a.m., members of In The Wind Ministries rode motorcycles onto the grounds in their own version of “Rolling Thunder,” a demonstration that aims to bring full accountability for prisoners of war and missing in action service members of all U.S. wars.

After the sounds from the motorcycles died down, a helicopter from the Livingston Parish Sheriff’s Office flew overhead, signaling the start of the ceremony two years in the making.

“Today is a great day,” Kurnish said in his welcome.

The ceremony began with the presentation of colors performed by members of the Walker High ROTC program. After the invocation and the Pledge of Allegiance, siblings Cruz and Dani Beadle performed the national anthem.

Landry, a veteran of the U.S. Army, then went to the podium to welcome the guests in attendance. During his opening speech, Landry reminded the audience “to not forget that children have lost parents in war and parents have lost children, as well.

“Let’s not forget the gravity of the day that we have before us today,” Landry said. “Let us share with our kids and younger generations… the importance of what today is. It’s not just another holiday. It’s a remembrance of the ultimate sacrifice that men and women have made for us.”

Sutton, an Air Force veteran, then went through the list of recently “departed comrades” from Livingston Parish, flipping through multiple sheets of paper as he spoke aloud the name of each fallen soldier.

It took Sutton a full 12 minutes to read through the names of more than 160 veterans who have passed since the last ceremony.

Kurnish then read “In Flaunders Fields,” a poem John McCrae wrote during World War I that has grown into one of the nation’s best-known literary works. The poem, which references the red poppies that grew over the graves of fallen soldiers, is widely associated with Veterans Day and Memorial Day.

Ricks was next to speak and share his thoughts on the holiday, recalling the “millions of Americans have fought and died to defend our freedoms.” Ricks also spoke on “the great divide” that “seems to keep growing” in the country,” which he said is a disservice to those “who sacrificed their lives in service to our country [and] did so for all Americans.”

“We will never be exactly like our neighbors,” Ricks said. “Those who gave their lives for this country were just as different as we are… but they all had a common goal — the defense of America and the defense of freedom.”

The ceremony concluded with the firing of the volley and the playing of “Taps” by Brice Larson and “Amazing Grace” on the bagpipes by Jim Johnson.