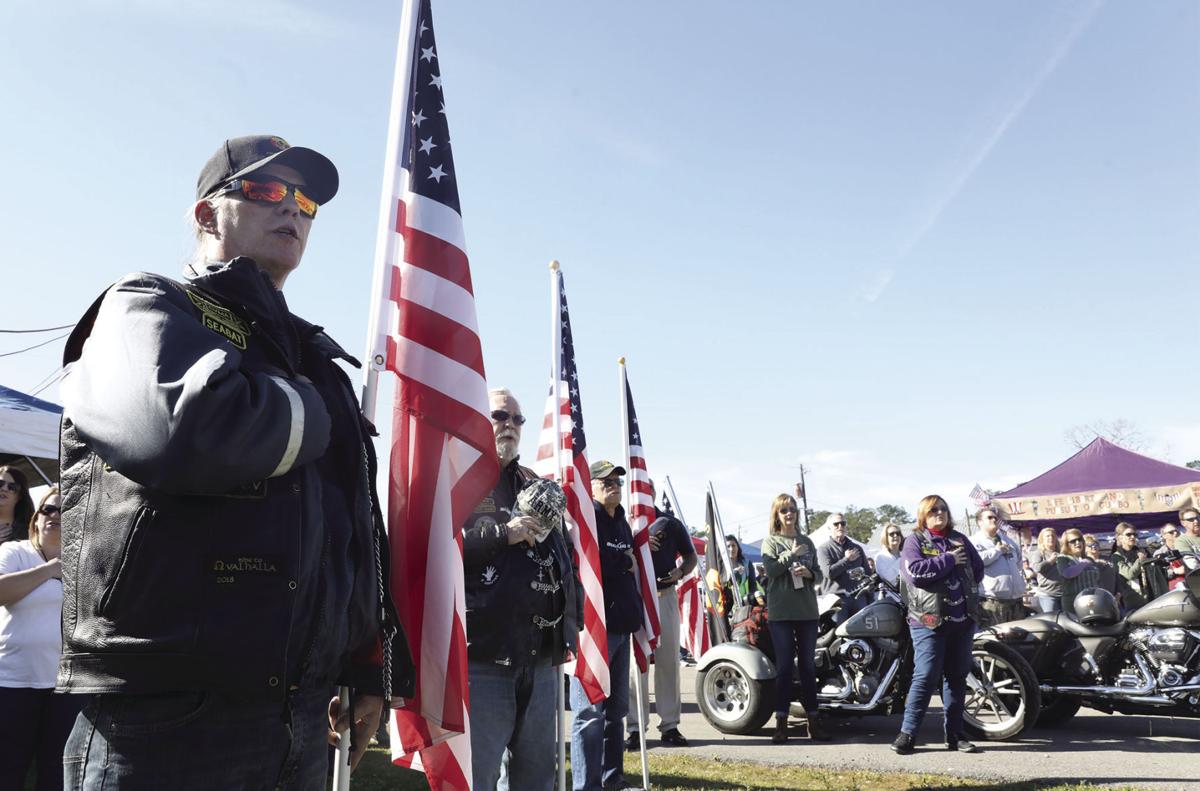 Veterans hold up flags and place their hands over their hearts as the national anthem is sung during the 10th Annual Bird and Sausage Gumbo Cook-off at the Livingston Parish Fairgrounds on Saturday, Jan. 25, 2020. 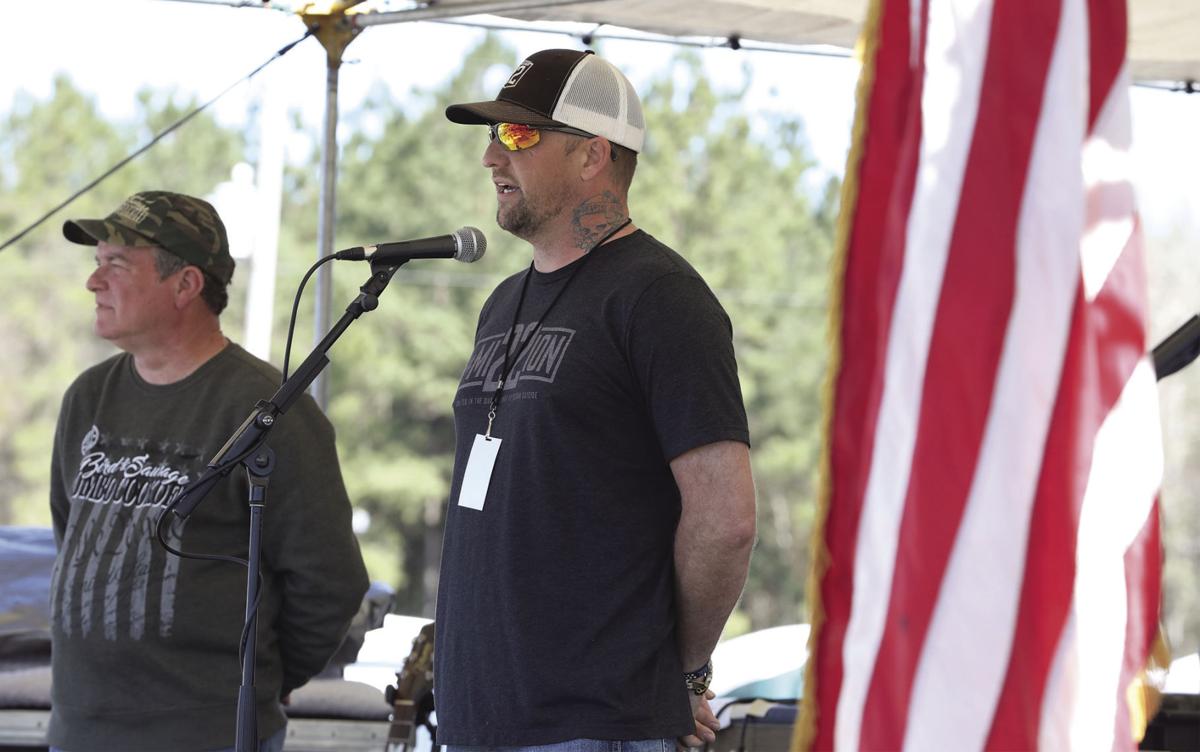 Sean Davis speaks about the life-changing work of Mission 22 in preventing veteran suicide during the 10th Annual Bird and Sausage Gumbo Cook-off at the Livingston Parish Fairgrounds on Saturday, Jan. 25, 2020. 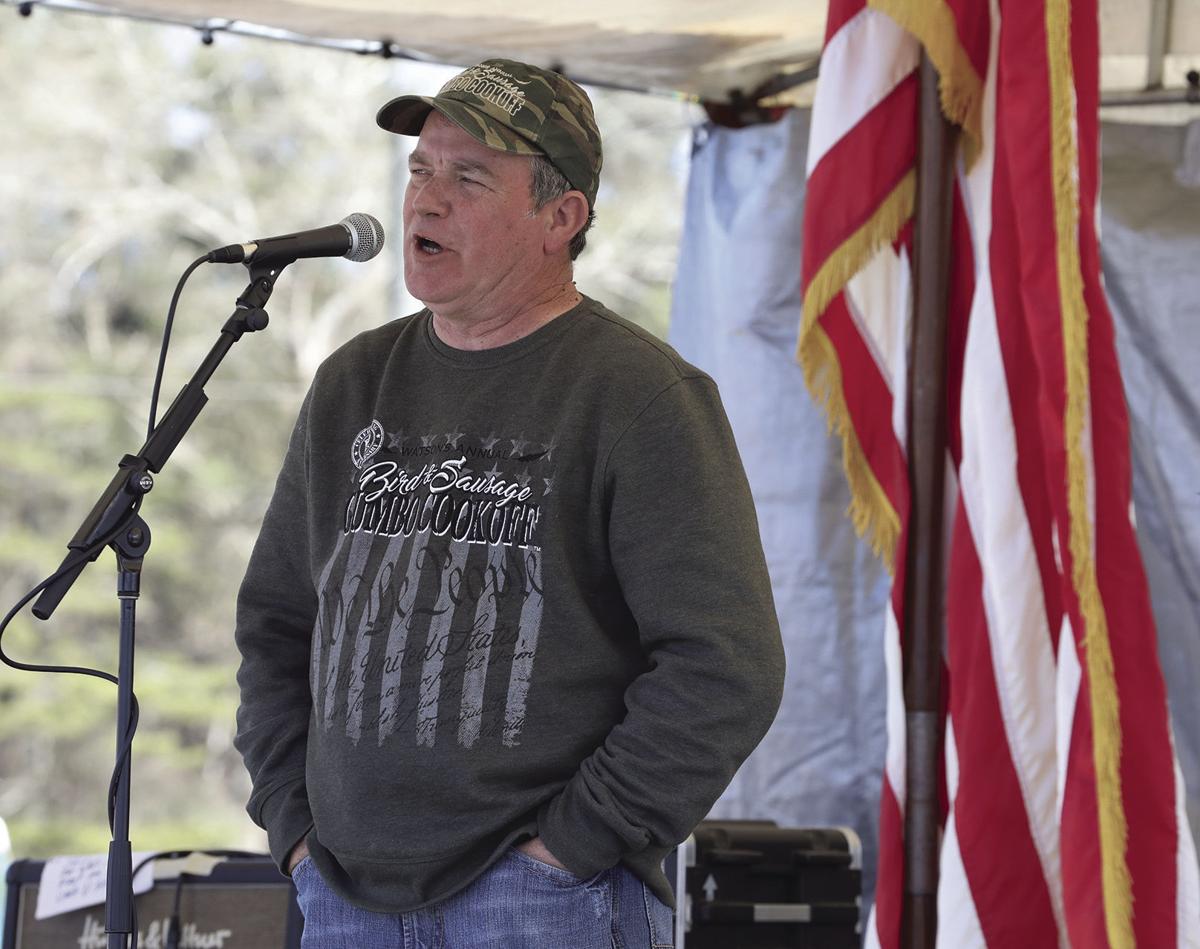 Berlin Coxe, one of the organizers for the annual Bird and Sausage Gumbo Cook-off, speaks about the importance of assisting veterans.

LIVINGSTON -- Every year when Berlin Coxe and his wife begin preparing for their annual gumbo cook-off, he takes a look at the numbers.

Not the number of cooking teams they estimate to have, which seems to grow every year.

Not the amount of money they hope the fundraiser will bring in, which has reached the tens of thousands.

Not the number of people who might show up, which is always a big crowd.

When Coxe begins planning for the biggest annual gumbo cooking showcase in Livingston Parish, the first numbers he looks at are centered around veterans, specifically the number of veterans sleeping on the streets.

Speaking to a crowd of flag-waving and patriotic-garbed ticket buyers on a sunny Saturday afternoon, Coxe relayed two statistics that have recently kept him up at night.

The first: There were 60,000 U.S. soldiers who lost their lives in the Vietnam War, Coxe said. Now, there are 65,000 homeless veterans who served in that conflict.

The second: On any given night, there are 40,000 homeless veterans.

“These people don’t have a shelter,” Coxe said. “They’re sleeping under a bridge or by the dumpster.

“We never thought about these things until the cook-off started,” he continued. “But when you research it, you see it’s more of a problem than you think. We shouldn’t let that happen. That’s our military. It’s up to us to do something, to make awareness more than what it is. We can stop it.”

Though people came for the gumbo, Coxe stressed the importance of giving a helping hand to those who laid their lives on the line for their country during the 10th Annual Bird and Sausage Gumbo Cook-off on Saturday, Jan. 25.

Aimed at raising money for local veterans programs, the cook-off drew hundreds to the Livingston Parish Fairgrounds, where wisps of smoke from pots of freshly-brewed gumbo hung in the air for all to smell.

For $15 a ticket, people ate all the gumbo they could stomach, as well as a plethora of other savory dishes. The event featured 50 cooking teams, who arrived around 6 a.m. to begin preparations, all of which were done on site. Apart from the food, ticket buyers enjoyed a mobile video game unit, a children’s play area, and live music from a full slate of local performers.

But the food and entertainment wasn’t the point of the event, Coxe told a large crowd before the cook-off officially got underway.

Raising money for veterans was.

Proceeds from the cook-off will go toward two organizations: Quad Vets, a homeless veterans facility that helps veterans rehabilitate their lives, and Mission 22, a non-profit organization dedicated to raising awareness of suicide among veterans.

A donation box was also set up to help cover the funeral expenses for the late Charles Ray Eddy, a Live Oak High graduate who suffered from post-traumatic stress disorder (PTSD) after serving in the U.S. Army and Air Force, his son, Nicholas said.

Everything else comes secondary, Coxe said.

“I can’t imagine that a man or woman serving their country, fighting for us, doesn’t have a home to come to. It isn’t right, and we have to fix it,” Coxe said. “The gumbo isn’t what it’s about. It’s about raising awareness and money to get these vets taken care of.”

The cook-off has undergone several changes since Coxe and his wife, Bobbi Jo Guerin, started it in their backyard 10 years ago. And as it’s grown in popularity, so, too, has its purpose and reach.

The event was held at Guerin’s home the first two years, but a crowd of more than 500 the second year forced the couple to find a bigger venue for their “little get-together.” It moved to Double D’s Daiquiris for the next five years before being relocated to the Live Oak Sports Complex.

The couple turned the event into a fundraiser in its second year, donating about $3,000 to St. Jude Children’s Research Hospital and the Wounded Warrior Project. The next two years brought in roughly $16,000 that went to the Raven Outreach Center, a non-profit organization in Baton Rouge that provides housing for homeless veterans.

Since then, proceeds have gone toward Quad Vets, which provides veterans with housing, meals, employment assistance, transportation, education, life skills, and financial training, among other programs. The cook-off has raised around $50,000 for Quad Vets, Coxe has said in the past.

Last year, Coxe and Guerin moved the cook-off to the fairgrounds, which provided all the necessary ingredients to put on a large-scale event — mainly, plenty of space.

They also added Mission 22 — named for the average of 22 veterans who take their lives every day — to their growing list of beneficiaries.

Sean Davis, the Louisiana state leader for Mission 22, told cook-off attendees he was one of those veterans who suffered from suicidal thoughts. After serving in Iraq and Hurricane Katrina, Davis said he “turned to the bottle” for 10 years, drinking two-fifths of whiskey a day as he lost his “family, jobs, everything.”

Davis said his life changed the day he put a double barrel shotgun in his mouth and pulled the trigger, only for it to misfire. He said that moment inspired him to take control of his life, echoing the words of a commander who told him, “If you’re not 100 percent trying to fix the problem, you’re part of the problem.”

“I knew I was supposed to be here for a reason,” Davis said.

Once Davis finished giving his personal story, Quad Vets executive director Wallace Sibley spoke on some of the work his organization does. Formed in 2004 and based locally in Hammond, Sibley said Quad Vets has a “90 percent success rate” in helping veterans “go from being homeless to self-sufficient.”

During his speech, Sibley also expressed appreciation to the cook-off for the money it has raised for the organization in years past. He encouraged people to give and “take care of the American hero,” at one point repeating the Quad Vets motto: “They fought for us. We fight for them.”

“It’s because of events like these that helps us do what we do for veterans,” Sibley said.

LIVINGSTON -- Chefs arrived at the Livingston Parish Fairgrounds around 6 a.m., just before the sun was up.