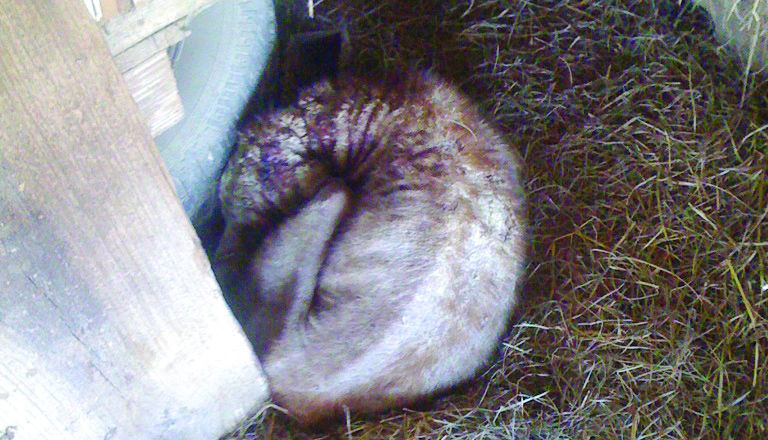 Non-profit rescue groups like the SPCA of Livingston are overwhelmed with sick, homeless strays like this one. The SPCA has no central shelter facility or tax revenue and depends on donations and volunteers to provide temporary homes. 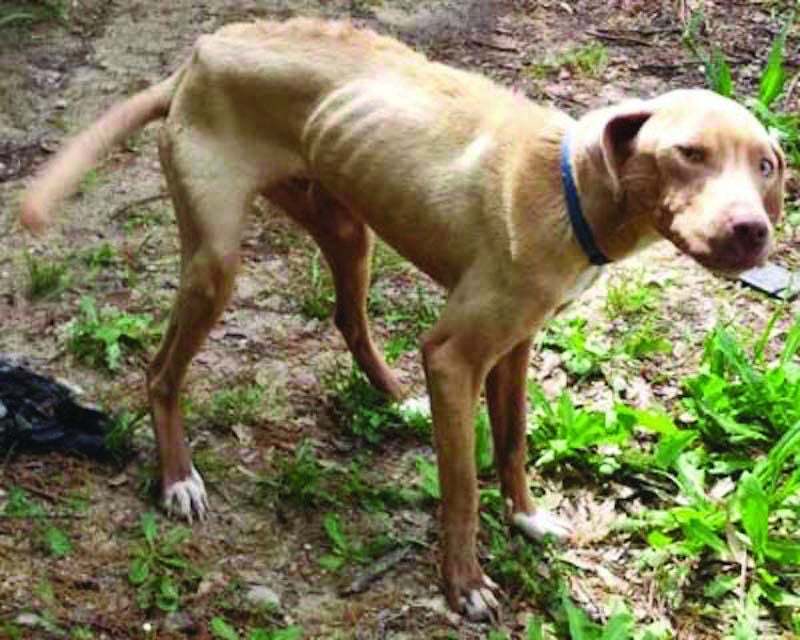 Buck was rescued by Walker Shelter Director Mary Gray on April 3. He was tied to a tree with a short chain. Gray thought she was approaching a dead dog until his tail started wagging. 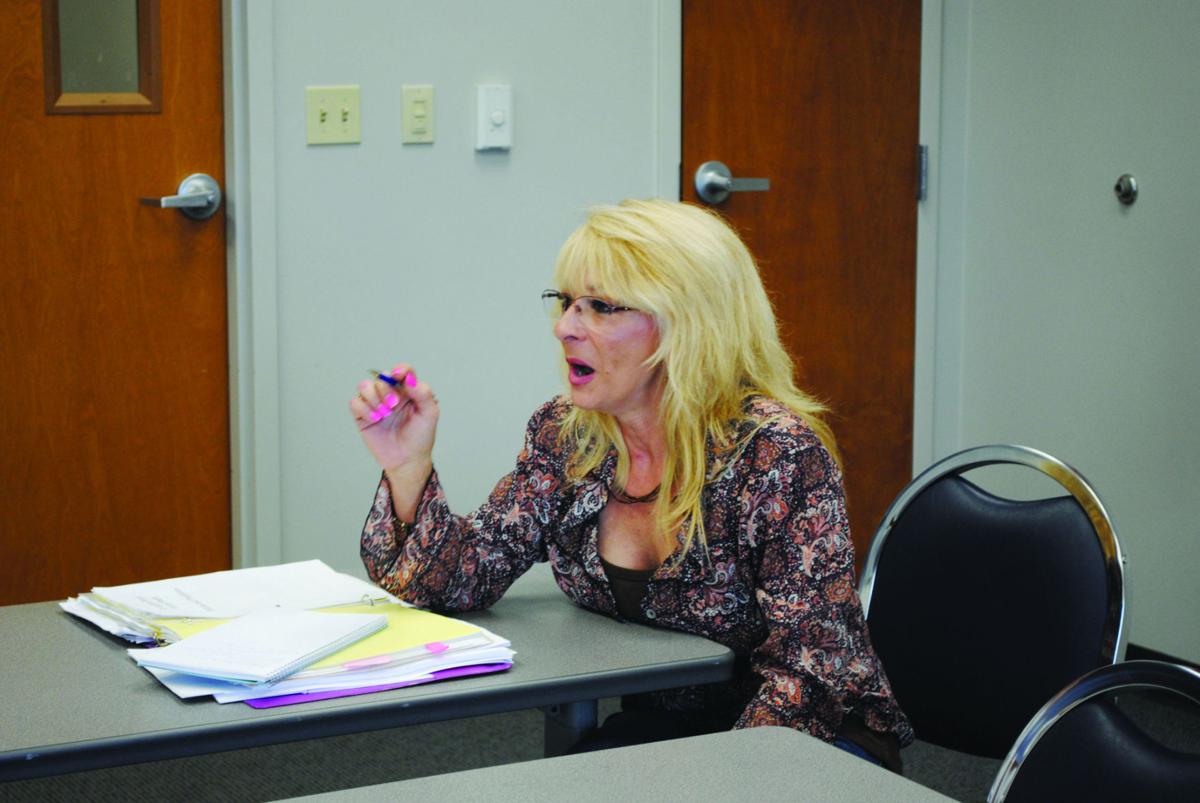 Desiree Green, assistant to parish Animal Control Director Sam Digirolamo, speaks to the Livingston Parish Animal Shelter / Control Advisory Committee in 2012. The Committee was asked to draw up a sample budget for a full-service shelter.

Non-profit rescue groups like the SPCA of Livingston are overwhelmed with sick, homeless strays like this one. The SPCA has no central shelter facility or tax revenue and depends on donations and volunteers to provide temporary homes.

Buck was rescued by Walker Shelter Director Mary Gray on April 3. He was tied to a tree with a short chain. Gray thought she was approaching a dead dog until his tail started wagging.

Desiree Green, assistant to parish Animal Control Director Sam Digirolamo, speaks to the Livingston Parish Animal Shelter / Control Advisory Committee in 2012. The Committee was asked to draw up a sample budget for a full-service shelter.

LIVINGSTON — Parish animal control workers recently refused a deputy’s order to pick up dogs in a cruelty case, according to the Livingston Parish Sheriff’s Office.

On April 2, Deputy Philip Lint responded to a report of inhumane treatment of animals in Eastover Estates. The deputy found a 43-year-old woman with an unspecified number of cats and nine dogs in her mobile home.

Deputy Lint took pictures of a small, white dog “unable to walk due to a broken back” and a “black and white dog with very large lumps (possibly tumors) growing from under the dog’s stomach area near the back legs.”

The utility serviceman who made the initial complaint also reported a dog with an open wound from the top of its inside thigh to the hip, as if it had been “cut by a filet knife.”

Both the deputy and the utility worker said they could not tolerate the stench inside the trailer.

“Deputy Lint experienced an overwhelming smell of animal feces and urine inside the residence, causing him to vacate the inside of the residence and finish the investigation outside,” according to the report.

“Deputy Lint then contacted the Livingston Parish Animal Control via phone and advised (the woman who answered) of the current situation and the condition of two dogs,” according to the deputy’s report. “Deputy Lint was advised by that female that it is the responsibility of the dog owner to ensure the dogs are taken to the veterinarian to get proper treatment. The dogs were left on the scene.”

According to the parish shelter’s Facebook page, the facility is “not open for any intakes from the public and can only take in dogs that are called in by the Livingston Parish Sheriff’s Office.”

Parish President Layton Ricks said his employees have the authority to ignore a deputy’s order to rescue if there is reason to believe that the person cited had previously tried to give the animals up.

Ricks said animal control assistant Desiree Green had previously received a call from a woman she believed to be the same person cited April 2 for cruelty. According to Ricks, the caller asked for help with dogs that needed to be put down because she did not have the money to pay a veterinarian.

When the call came in from Deputy Lint, Green “knew this lady was trying to get the dogs put down,” Ricks said.

Ricks said he supported Green’s decision to leave the dogs where they were. The parish cannot afford to euthanize all the dogs that are too sick or too badly injured to recover, Ricks said. The parish has spent about $500,000 on animal control over the past three years.

In September 2013, Green told the Livingston Parish Animal Control Board that the administration would not set an arbitrary limit to a dog’s length of stay at the shelter, and would continue paying a veterinarian to perform euthanasia.

John Wascom, now in his fourth month as a Parish Councilman, said the Eastover case was his first encounter with the animal control department. Wascom also spoke with Green about the Eastover animal cruelty case.

“She (Green) said one of the dogs had been run over by a car,” Wascom said. “I have to question the decision to leave those dogs, seeing as a deputy said they should be euthanized.”

Green could not be reached for comment by the News.

Members of the now defunct Animal Control Board, or Committee, said the policy requiring a citation frustrated subdivision residents trying to cope with abandoned dogs.

Residents are “tired of watching dogs in bad shape, emaciated and suffering. People in neighborhoods are watching them die,” committee member Randy Stegall said in 2013. “If we hold dogs in the shelter until they are adopted, then it will be a ‘no kill’ shelter. We can’t do that. Too many animals are out there suffering.”

At that time, at least one dog had been at the shelter nine months. Now the parish shelter’s Facebook page suggests that adoptable dogs are being euthanized.

“URGENT!” reads one post. “These sweet guys/girls are out of time! If you are interested in saving anyone in this album please give us a call.”

The Board had been assigned to draw up a sample budget for a full-service shelter and a policy to address overcrowding. A majority of Board members said spending per dog would have to be reduced drastically in a full service shelter. Meanwhile, shelter officials expanded the existing shelter.

“If we’re offering animal control, then people should be able to rescue a dog and take it to the shelter,” Board member Phillip Woods said at a November 2013 meeting.

Green said taking drop-offs would put the shelter population well over its capacity. She refused to put down dogs based on the time they spent at the shelter, even though it meant turning away other dogs.

Mary Gray, Board member and Director of the Walker Animal Shelter, Woods, and others said the parish was wasting money by putting dogs down at Dodge City Veterinary Clinic when shelter employees could be trained to perform humane euthanasia themselves.

Wascom recently made the same point, saying that the cost of euthanasia at the shelter would be minimal and would allow the parish to respond to calls such as the one received April 2.

The amount of information required to register with LPN is borderline privacy invasion. It probably kept others from commenting. This is a horrific story. I am disappointed that LPN did not come up with one rescue or veterinary office to act as a coordinator for multiple rescues to each pull one of these animals. I'm also lost as to how this isn't an abuse case (even if the reason is financial). Wouldn't the animals be seized if they were being abused.

To the author of this story, it is a journalist's job to tell the story--not fix the problem. However, it seems this story was written to solve the problem and then stopped. There was no call to action.

I agree...it's ridiculous to info needed.

This is absolutely a case of neglect and abuse!!

So what exactly IS "humane euthanasia"???? Obviously 2 or 3 of those dogs in that hoarding deplorable condition NEED to be put down immediately!!! They kill healthy dogs every week, but they can't get these pitiful babies out of that suffering he'll they're in??? Does ANYBODY care about anything but money anymore??? How can you knowingly let an animal SUFFER SO BAD because of money? People need to just do the right thing, again. It seems to be a lost concept.