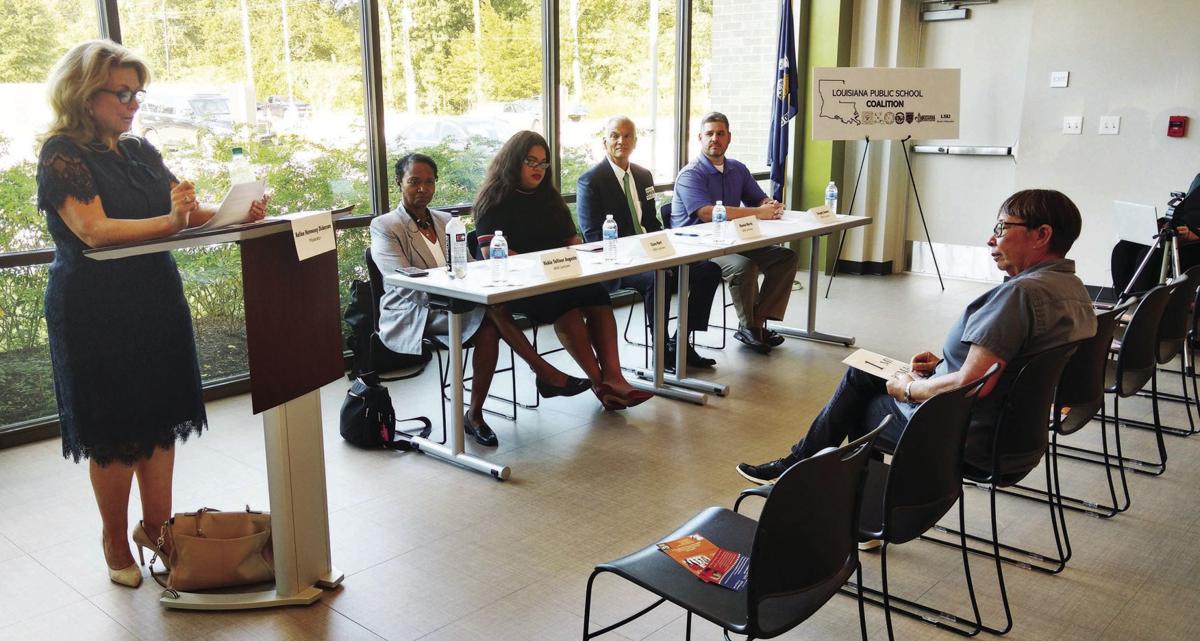 Moderator Kellee Hennessy Dickerson, left, outlines the forum rules to the District 6 candidates to the state Board of Elementary and Secondary Education on Wednesday. Seated from left are Vicki Auguste, Ciara Hart, Ronnie Morris and Gregory Spiers. 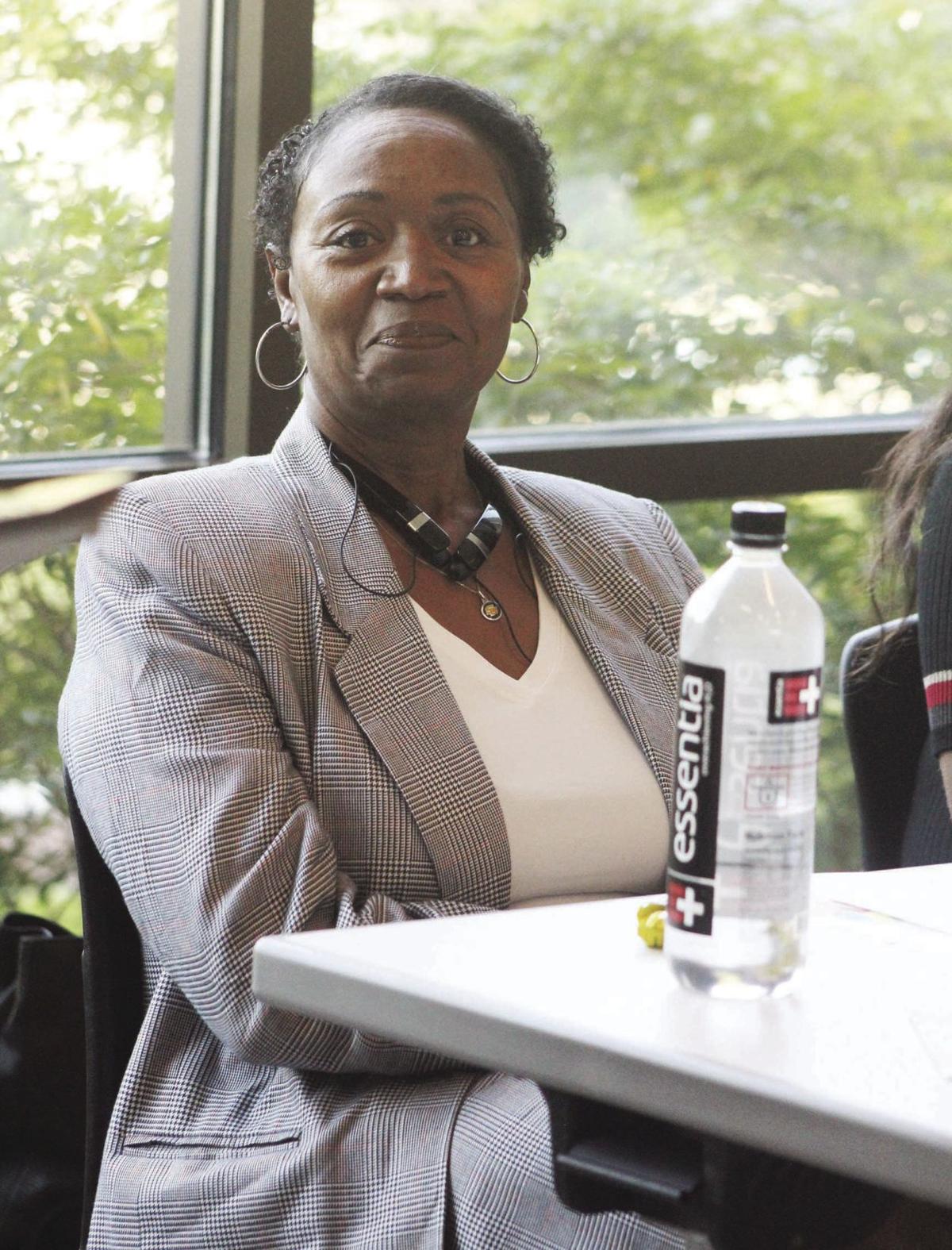 Vicki Auguste took part in the candidate forum for the District 6 seat on state Board of Elementary and Secondary Education (BESE) on Wednesday at the Denham Springs/Walker Branch Library. 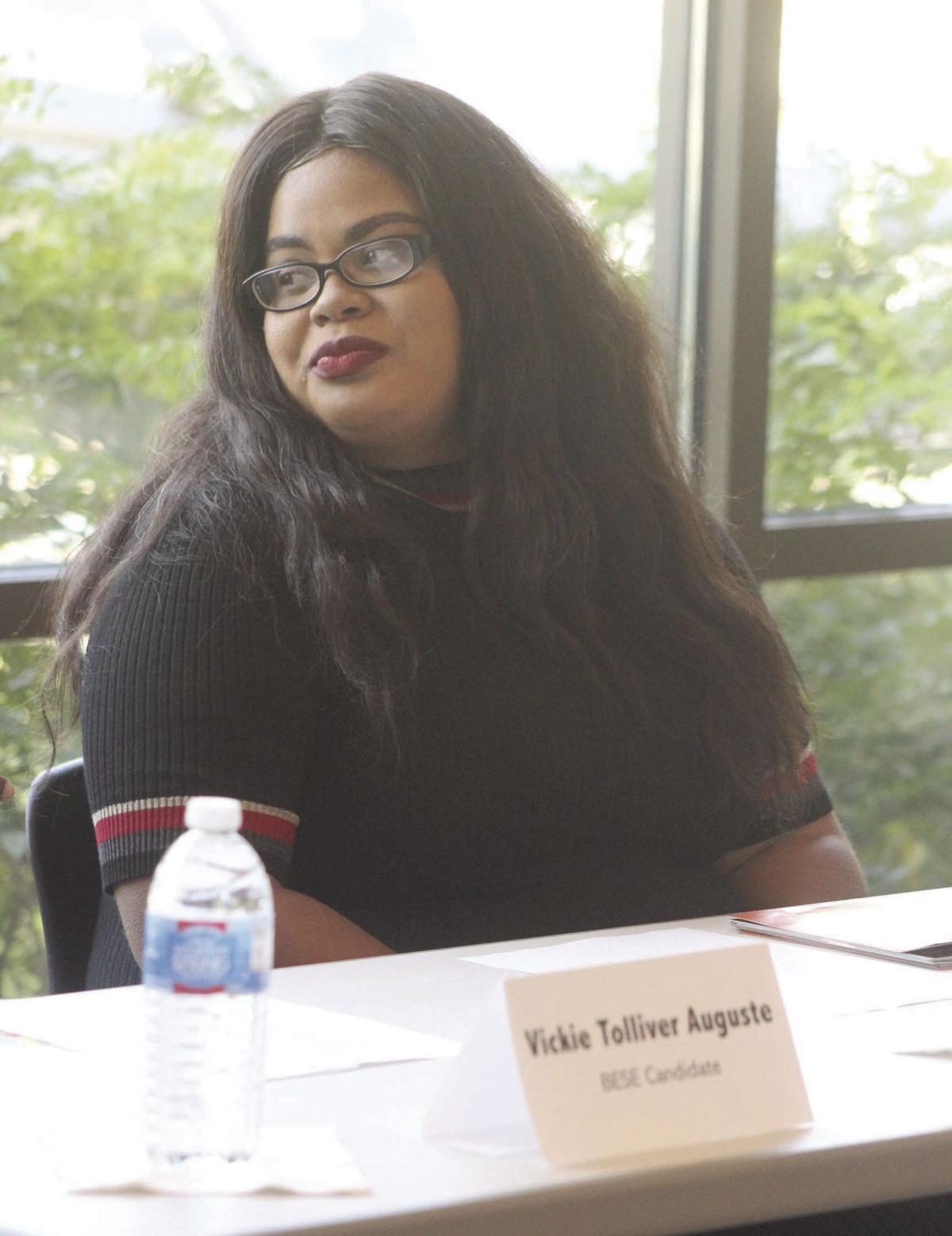 Ciara Hart took part in the candidate forum for the District 6 seat on state Board of Elementary and Secondary Education (BESE) on Wednesday at the Denham Springs/Walker Branch Library. 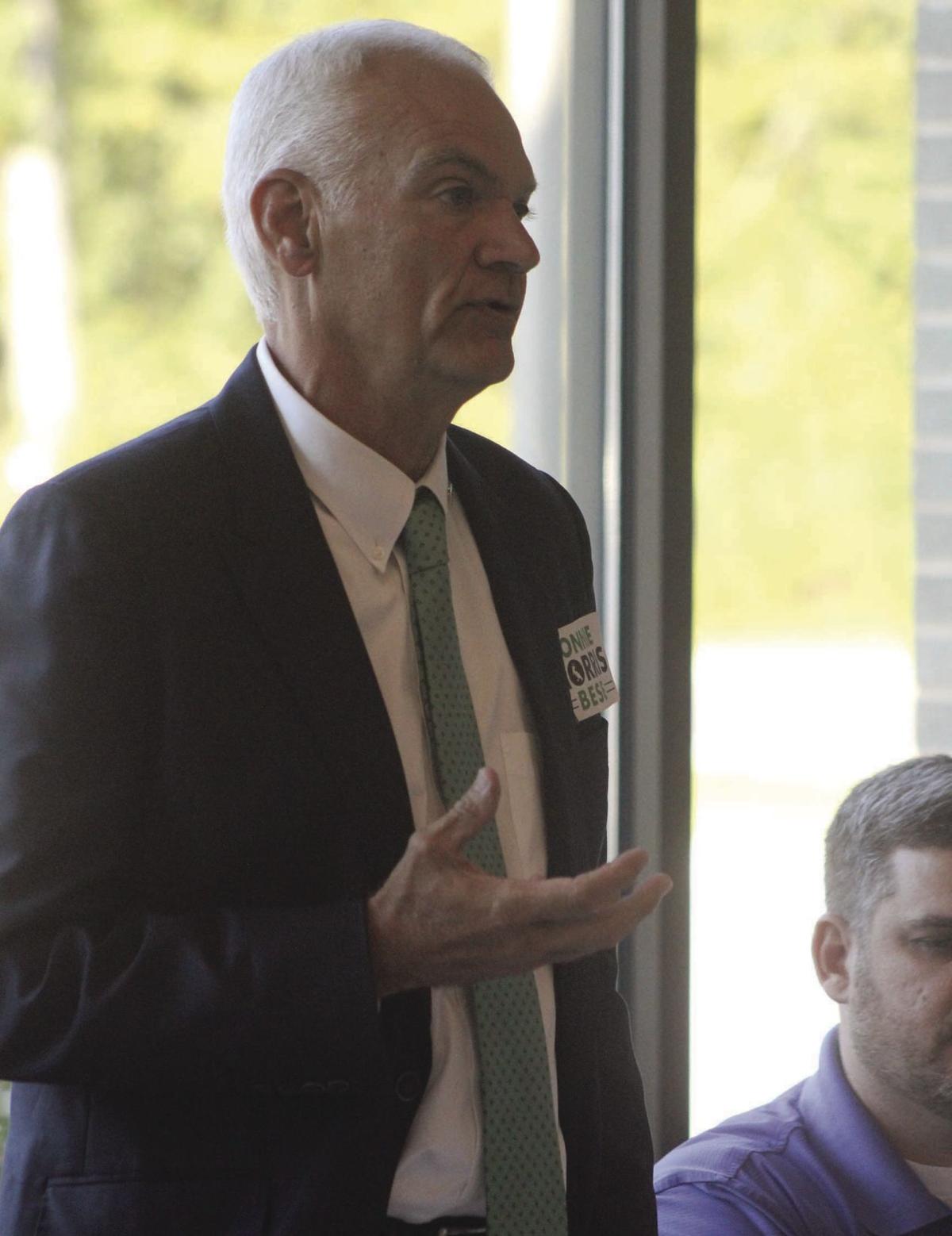 Ronnie Morris took part in the candidate forum for the District 6 seat on state Board of Elementary and Secondary Education (BESE) on Wednesday at the Denham Springs/Walker Branch Library. 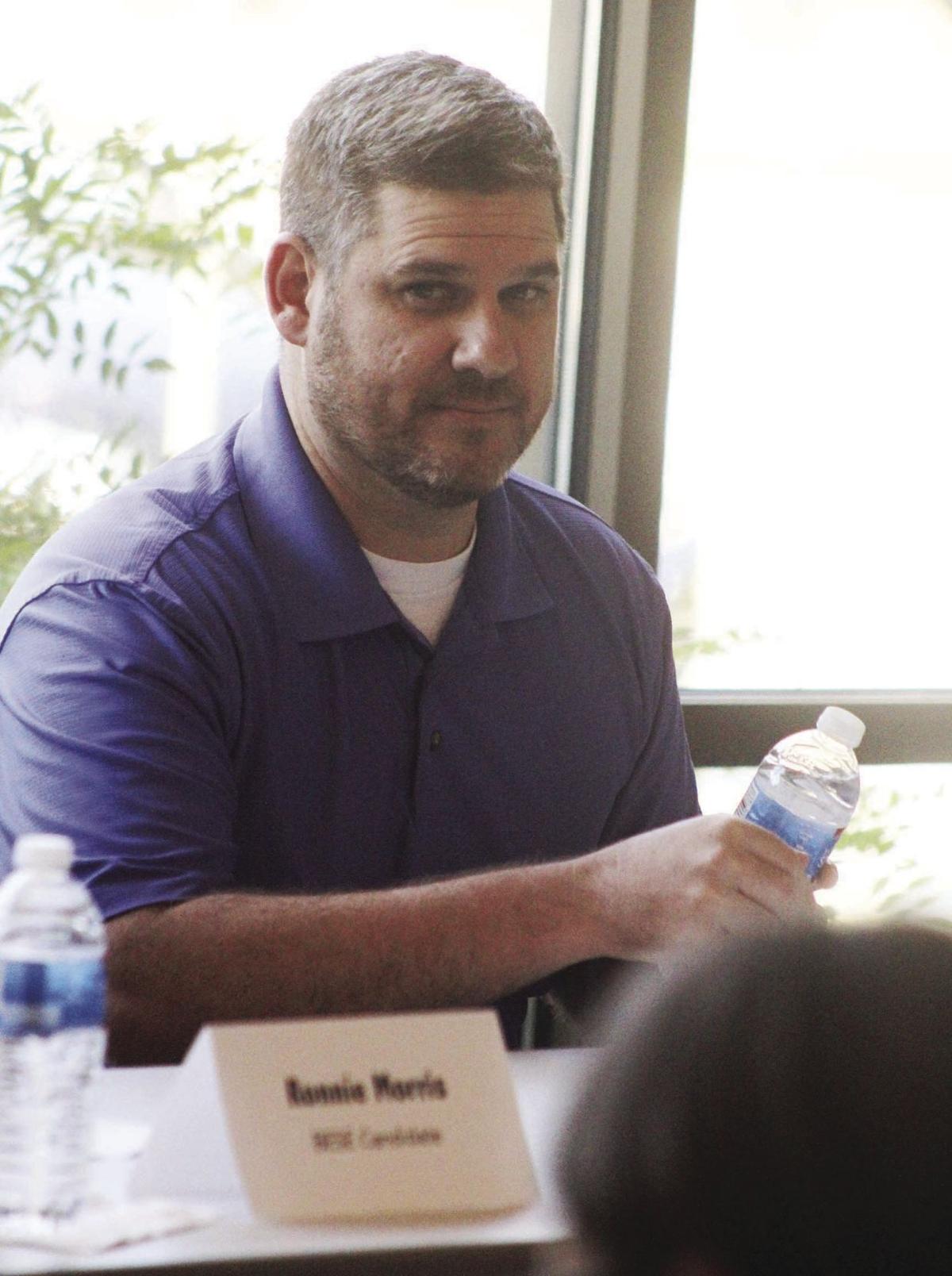 Gregory Spiers took part in the candidate forum for the District 6 seat on state Board of Elementary and Secondary Education (BESE) on Wednesday at the Denham Springs/Walker Branch Library.

Moderator Kellee Hennessy Dickerson, left, outlines the forum rules to the District 6 candidates to the state Board of Elementary and Secondary Education on Wednesday. Seated from left are Vicki Auguste, Ciara Hart, Ronnie Morris and Gregory Spiers.

Vicki Auguste took part in the candidate forum for the District 6 seat on state Board of Elementary and Secondary Education (BESE) on Wednesday at the Denham Springs/Walker Branch Library.

Ciara Hart took part in the candidate forum for the District 6 seat on state Board of Elementary and Secondary Education (BESE) on Wednesday at the Denham Springs/Walker Branch Library.

Ronnie Morris took part in the candidate forum for the District 6 seat on state Board of Elementary and Secondary Education (BESE) on Wednesday at the Denham Springs/Walker Branch Library.

Gregory Spiers took part in the candidate forum for the District 6 seat on state Board of Elementary and Secondary Education (BESE) on Wednesday at the Denham Springs/Walker Branch Library.

But they love teachers and support education.

Four candidates for the District 6 seat on the state Board of Elementary and Secondary Education (BESE) expressed those views Wednesday at a candidate forum sponsored by the Louisiana Public School Coalition. It was held at the Denham Springs/Walker Branch Library.

District 6 is made up of Livingston, Tangipahoa, and Washington parishes and part of Ascension and East Baton Rouge parishes.

From their opening statements, the candidates made some of their stances clear.

“I’m not against all charter schools, but we’re at a point in time we need to put a ban,” said Auguste, who described herself as a veteran educator of 24 years.

Charters are “taking a lot of much-needed funds from public school systems,” she said. “Corporations only see our kids as dollar signs.”

“I will fight to get rid of John White,” Auguste said. “John White is the biggest problem. When he was appointed, I was more qualified,” she said, citing her four degrees.

Hart, an eighth-grade American history teacher, said her dream is for “every child to have an equitable education.”

Teachers should be paid as professionals, she said.

Louisiana must address the growing number of students entering schools whose first language is not English and adopt a “curriculum that addresses the needs of students, a curriculum that doesn’t make an assumption of what children need to know.”

Morris said he went to college at age 32 and after graduation taught high school calculus and physics for a year. He also volunteers in public schools, at one time bringing Junior Achievement into schools – Istrouma, Dunham, and Catholic High.

“I appreciate the cultures of different schools.”

“Seventy-five percent of eighth-graders aren’t proficient in language skills,” he said. “We need to teach kids to read. They should be literate by third grade.”

Spiers also recounted his own educational experience after serving four years as a SEAL in the U.S. Navy, going from substitute teacher to full-time teacher at Ponchatoula High for two years, where he taught juniors and seniors who were not going to college.

“Only 19 percent of students graduate with four-year degrees; the other 81 percent go into the workforce,” Spiers said. “We are not preparing them.”

BESE needs to focus on teacher attrition, getting rid of Common Core, and “give more authority back to local school districts," Spiers said.

“Education reform has been a complete failure,” Spiers said. “Common Core was to standardize every student in the nation.

“We were 48th in math. After 10 years, we’re still 48th,” he said. “Our superintendent is the third highest-paid superintendent, more than double the governor.”

Morris said some reforms are working with the state’s graduation rate at 81 percent, its highest level.

Better transparency for parents to make choices in schools is needed, he said, along with improving the relationship between White, BESE and local districts.

“Reform needs to be reformed,” Hart said. “Louisiana has to make education the main priority. Reform is a way to divide our community into either pro-charter or traditional (schools).”

“Reform is another way of saying school choice,” Auguste said, “another way to say separation. We are selling our kids out to these major corporations.

Their approach to BESE

“I can work with the new BESE members. We need a majority to make things happen,” Auguste said.

“I can do that. I can show them the raw data that education reforms are smoke and mirrors,” she said. "You watered down the standards to inflate the graduation rate.

“I see my kids every day directly affected by BESE decisions,” Hart said. She also worked in charter schools and saw “the issues that need to be addressed.”

“We’re polarized on different sides now. We need to find common ground to work for our kids.”

“I am pro-school choice,” Morris said. "Every kid is different.”

“It hasn’t turned out that way. Every child should have an opportunity and parents the opportunity to make that choice – public, private, charter, home school, the Internet," Morris said.

“All four of us care about education,” Spiers said about himself and the other candidates. The BESE seat is “not as easy office to hold,” he said.

Spiers called himself a Republican that cares about teachers, school administrators, and students.

“There’s too much decisiveness with Democrats and Republicans, teachers union and lobbies. I am pro-business, but I love our children and they are our most important commodity.”

What is BESE doing well and what needs changing?

“I don’t think they are doing much well,” Spiers said, citing a refusal to address Common Core.

“We’re confusing our children by teaching Common Core standards,” he said, which require an eighth-grader to take 3 minutes to do a math problem that can be done in 15 seconds.

Type 2 charter schools that are being turned down by school districts are going to the BESE, which approves them, he said.

“That’s not the job of BESE, in my opinion,” Spiers said. “If the community wants them, I’m OK. If they reject them, then they are not in business.”

BESE is not doing a good job of communicating to the public, according to Morris.

“Eighty percent of the people ask: 'What is BESE?',” he said.

The board should tell people what it does and its expectations, he added.

”We’ve got to have a relationship between the superintendent, BESE, local districts and teachers. That’s not in place today,” Morris said.

Changes are needed to give teachers a voice in decisions on curriculum, Hart said.

A proposal is being floated to combine English language arts and social studies, she said. As a teacher, Hart said she has never received a survey or was invited to a forum.

BESE meetings also are not accessible for working-class families because of the time they are held, she said.

The current BESE board has done some positive things “in their opinion,” Auguste said, “draining public school system resources by approving Type 2 charters.”

“What I think they are not doing —providing teachers and students with the support they need. We need to appoint a superintendent (who) can work with the people.

“Parents and community stakeholders need to have input.”

Teaching as a career

“I’m a teacher but my degree is in social work,” Hart said. “It allows me to be the teacher I am.”

Teacher retention is important, she said.

“Give us the support and resources and I promise we will stay in the building.”

“Teachers say they can’t deal with it. It is flawed,” she said. “You go in like a witch hunt with a checklist and you have to find something wrong.”

Even if teachers are doing good and have good classroom management, the evaluator “has to find something negative. That’s why veteran teachers like myself tell young people don’t go into education.”

Spiers said with the situation facing educators now, “Teachers are missionaries. They go to work in adverse environments.”

Teachers should be evaluated on creativity, professionalism, knowledge and delivery of content, not test scores, he said.

“We’ve got to create an environment to help teachers to teach, children read to learn.

He recalled being with a group of engineers tutoring second-graders and after helping one girl with her math homework, she told him, "Mr. Ronnie, I never studied with an old guy before. This was fun.”

“If (a teacher) needs that one-on-one reinforcement, the system reeds to be there for the student.”

Check out the articles, videos, and podcasts collected by the Livingston Parish News ahead of tomorrow's election! (Podcasts and videos are free)

John David Newchurch, born in Madison, NJ, and a native of Bat…