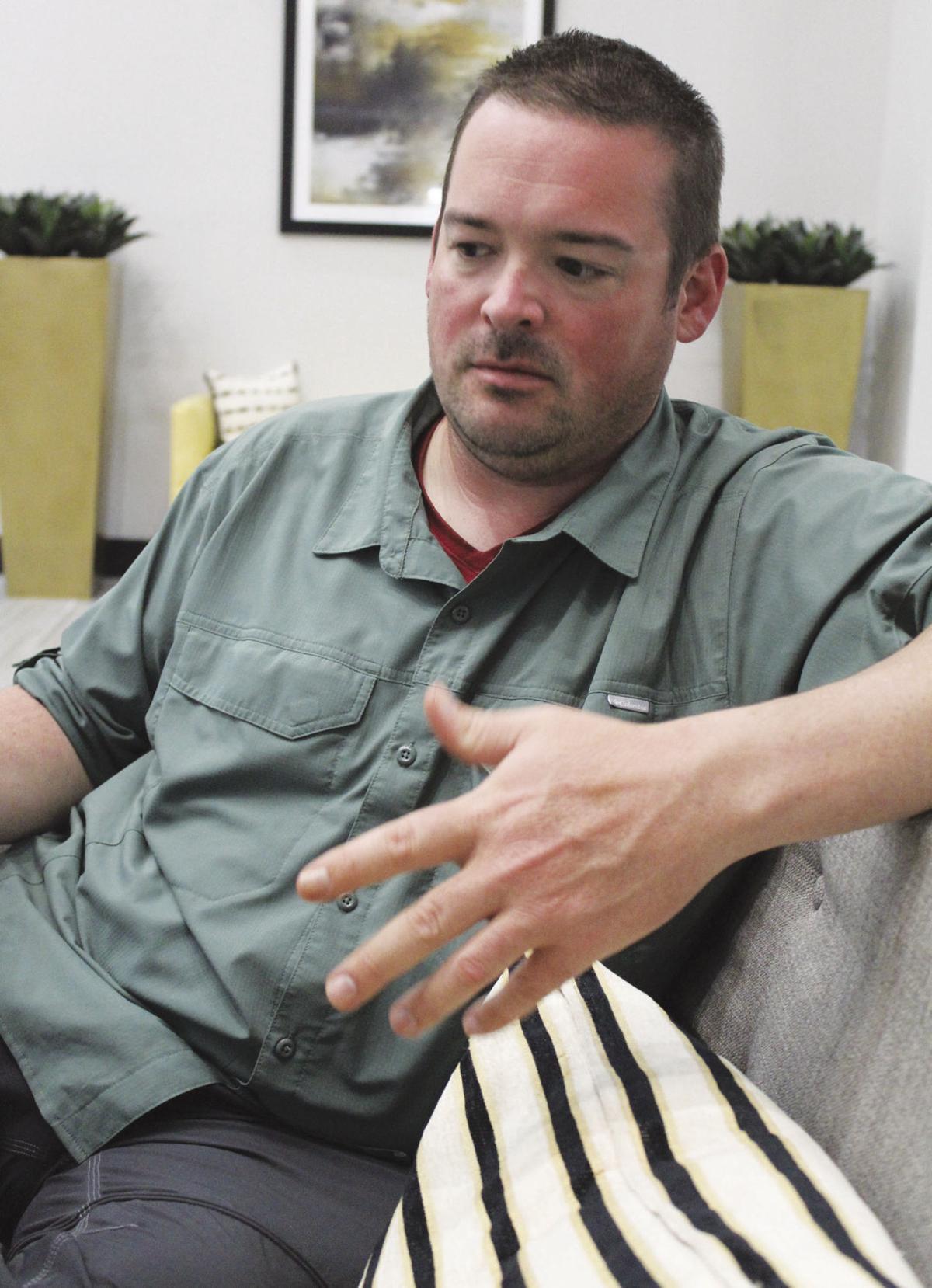 Army veteran Eli Smith paused in Walker in his 13,000-mile hike to the four corners of the continental United States to raise awareness of PTSD and the suicide rate of veterans. 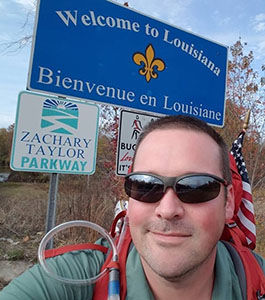 Army veteran Eli Smith took a selfie to mark his arrival in Louisiana last week in his 13,000-mile hike to the four corners of the continental United States to raise awareness of PTSD and the suicide rate of veterans. 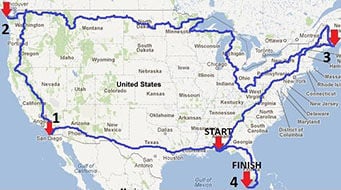 Army veteran Eli Smith is following this 13,000-mile path to the four corners of the continental United States to raise awareness of PTSD and the suicide rate of veterans.

Army veteran Eli Smith paused in Walker in his 13,000-mile hike to the four corners of the continental United States to raise awareness of PTSD and the suicide rate of veterans.

Army veteran Eli Smith took a selfie to mark his arrival in Louisiana last week in his 13,000-mile hike to the four corners of the continental United States to raise awareness of PTSD and the suicide rate of veterans.

Army veteran Eli Smith is following this 13,000-mile path to the four corners of the continental United States to raise awareness of PTSD and the suicide rate of veterans.

WALKER – Army veteran Eli Smith is on a 13,000-mile hike around the United States, but he sees a harder path in front of other veterans.

The Columbus, Ohio, native is walking to the four corners of the nation, its four extreme geographic points, to raise awareness of PTSD and the suicide rate facing veterans and raise funds to fight both.

“It’s a lot of lonely nights,” said Smith recently, as he rested at the Best Western in Walker in his trek west across Louisiana.

Smith began Nov. 22 and estimates it will take 3½ years, but other veterans see no end to their struggles with PTSD.

“I was tired of people I know taking their lives or suffering from PTSD,” he said. “We need to do something to save our veterans.”

PTSD also reached his own family. Smith said his grandfather served in the Korean War. His grandmother learned to wake him by wiggling his toe; to touch him would cause him to start swinging.

Post-traumatic stress disorder affects 2 percent of the U.S. population, an estimated 7.7 million people, according to MilitaryMentalHealth,org.

From 11 percent to 20 percent are veterans of service in Iraq and Afghanistan, some 300,000 veterans, its post on Smith’s Facebook page says.

“While there are effective treatments available, many people, especially veterans, do not seek or receive help,” according to the Internet site.

Smith began his hike at Fort Pickens in Pensacola, Fla., bound to San Diego and his southwestern point. From there, he plans to take the Pacific Crest Trail to Washington state and his northwestern point.

He will then take the North Country Trail to New York and go to Maine for the northeastern point. Finally, he will come South on the Appalachian Trail to Key West, Fla., and the southeastern point.

“Money raised on this hike will be distributed to multiple charities and organizations that help our heroes,” Smith has posted on his Facebook page, 4Cornershike, where people can follow his journey.

Although he is only four states into his hike, Smith says he has met veterans affected by PTSD and the loved ones of those affected by it.

Smith met a woman whose veteran-son has PTSD; she told Smith he never speaks. Smith made small talk about video games and her son began speaking to him.

“There’s lot of therapy methods,” Smith said that address PTSD or those considering suicide. “The whole point is if just one life is saved, (this hike) is worth it.”

Smith served as an Army tank gunner in South Korea, “the best job I ever had. I wanted to do this since I was a little boy.”

He underwent both basic training and advanced training at Fort Knox, Ky., where he learned the bond among comrades is strong in the military.

“It’s quite a shock. You are instantly submerged and surrounded by people, other soldiers, you’ll do anything for,” he said.

But losing those friends in combat, or the experiences of war itself can change them.

To do his walk, Smith knew he would have to take “3-4 years off my life. I sold everything to pay for my gear,” carrying his tent and items on his back.

“I’m keeping my expenses as simple as possible, spending less than $5 a day. Pasta, oatmeal, peanut butter and granola bars … and Snickers,” are  diet staples.

Smith estimates he will need to average 15-20 miles a day, then 20-23 miles after California to cross the north ahead of winter.

Since he can’t hike on interstates, Smith maps out routes through the backroads. As he enters a town or state, he notifies the local police department or state police unit about what he is doing.

“The South has been good so far,” Smith said, “It is setting a good example for the rest of the country to follow,” in its awareness of PTSD and its reception of him.

American Legion and VFW groups have greeted him on his walk, even getting him a hotel room as a break from camping out.

“There’s a difference between a tent and a hotel room. We take a lot for granted,” Smith said.

But Smith does have those moments when he educates people about PTSD.

“People are starting to recognize the importance of talking about it, watching for signs if their loved one served,” in the military, he said.

While his gear is just what he carries on his back, Smith does have a GPS transponder with an SOS button.

“My mother likes the idea of that. I’ll be alright; a lot of people are keeping track of me,” he said.