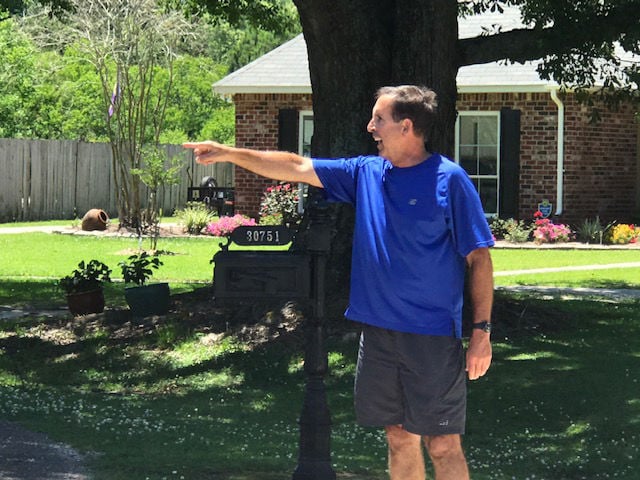 Chris Soileau points at a vehicle during a retirement parade held in his honor Monday. 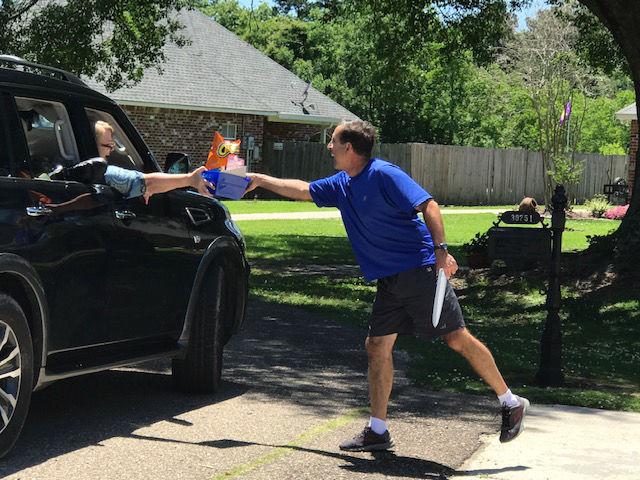 Walker coach Chris Soileau is handed a gift during a retirement parade held in his honor Monday. 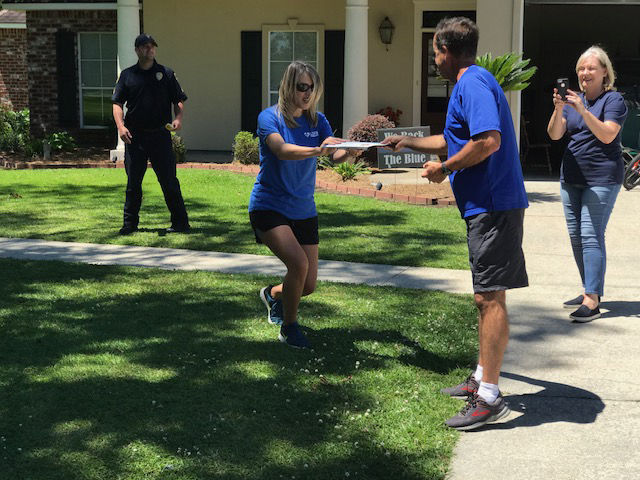 Chris Soileau is presented a certificate from Gov. John Bel Edwards' office recognizing his retirement by Lori Steele of the Livingston Parish Sheriff's Office and the Louisiana Organ Procurement Agency. 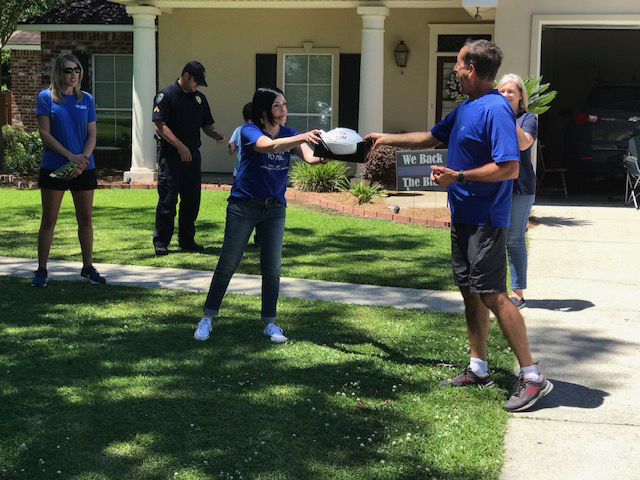 Chris Soileau is presented a Billy Cannon autographed football, which was given to a donor family to support the Louisiana Organ Procurement Agency.

Chris Soileau points at a vehicle during a retirement parade held in his honor Monday.

Walker coach Chris Soileau is handed a gift during a retirement parade held in his honor Monday.

Chris Soileau is presented a certificate from Gov. John Bel Edwards' office recognizing his retirement by Lori Steele of the Livingston Parish Sheriff's Office and the Louisiana Organ Procurement Agency.

Chris Soileau is presented a Billy Cannon autographed football, which was given to a donor family to support the Louisiana Organ Procurement Agency.

DENHAM SPRINGS – Chris Solieau likes to have few laughs, so it’s only fitting his colleagues had one at his expense while sending him off into retirement on Monday.

As has been the case in many places during the novel coronavirus pandemic, there wasn’t a formal get-together, but a parade featuring current and former co-workers. The best part was Soileau didn’t know it was coming.

“This was a good one,” said Soileau, who said he was sitting in his driveway reading a cookbook when his wife, Lisa, and daughter, Lindsay Hernandez, brought the approaching parade to his attention.

“We had seen a lot of little elementary schools have little parades, you know? I thought it was just another one until I saw one with the word ‘retirement’ on it,” he said. “I kind started thinking like, ‘uh-oh’. It was the real one. They really got me.”

So much so that Soileau’s main reaction was just to point at some of the cars as they passed his house, with some occupants of those vehicles handing him gifts.

“They were saying some things,” he said. “Giving me a gift. Saying a funny slogan. I had to give them a little individual attention to say thank you for being part of it. That really surprised me. There were some people I haven’t seen in a couple years.”

Soileau had a 10-year stint as the head baseball coach at Walker High, compiling a 242-96 career record. He also coached at Vandebilt Catholic and Northeast Louisiana.

“We had a good run,” Soileau said, noting he had 18 players sign with colleges. “I ride by the field and I look at it and I see a lot of memories. I see faces of the kids that I coached. Now they’re married. They have kids. They have good businesses. They’re good people, so that’s another thing I have no regrets (about). The kids I had, we never won state, but we had lot of state champions on that field. Those kids are good.”

But maybe Soileau’s biggest contributions came in the classroom at Walker Freshman High School, where he taught Introduction to Health Occupations, a class that covers a range of health topics, including learning CPR, removing victims from auto accidents and making 911 calls.

“A lot of these kids will go off and become paramedics – maybe a fireman, maybe a doctor, nurse,” Soileau said. “I’ve got a lot of ex-students who are in first-responder jobs.”

In teaching the class, Soileau said it was his goal to bring in police officers, paramedics and others to lend their knowledge to students, and he also became involved with the Louisiana Organ Procurement Agency, a non-profit organ and tissue recovery agency for the state.

“You talk to some of these kids who have graduated who have gone on to get jobs,” said Lori Steele, public information officer for the Livingston Parish Sheriff’s Office and LOPA community educator and organ donation advocate. “Coach was a reference for them, and they’re like, ‘man that’s the best thing that happened to me at the (Walker) Freshman High School was running across this guy. He brought in these folks to introduce these careers that I never thought possible.’ For me, it’s just fun to watch coach in the classroom to connect with these kids. I’m a mom, and I love to see that interaction, and that’s what they offer here in Livingston Parish, these teachers with heart.”

Soileau said his goal was to help his students make an informed decision regarding organ donation.

“I was clueless on organ donation, and I think a lot of people walking the street are clueless about it,” Soileau said.

Soileau said he wasn’t an organ donor, but one of his students changed that when she brought in her organ donation paperwork one day as he was grading papers.

Soileau said when Steele saw the form, she called him because she thought the form was for a student who had the same name as the coach.

“He said, ‘you’ve answered all of my questions … that’s what I want to provide for my kids. I want them to have an opportunity to ask these questions so they too can make an educated decision,’” Steele said. “To me, he’s just brilliant, and he’s really going to be missed in the classroom.”

Soileau, who was presented a certificate from Gov. John Bel Edwards’ office commemorating his retirement as well as a Billy Cannon autographed football, which was given to a donor family to support LOPA, said his classes brought in 35-50 organ donors per semester. But that was only part of his thought process after Monday’s festivities concluded.

“I like to make people laugh and put them in the moment,” he said. “If anybody remembers me for anything, it’s giving it all I’ve got. I might not have been the best at it, but I gave it all I got, and we had fun doing it.”

Soileau’s family, friends and co-workers made sure of that with Monday’s parade.