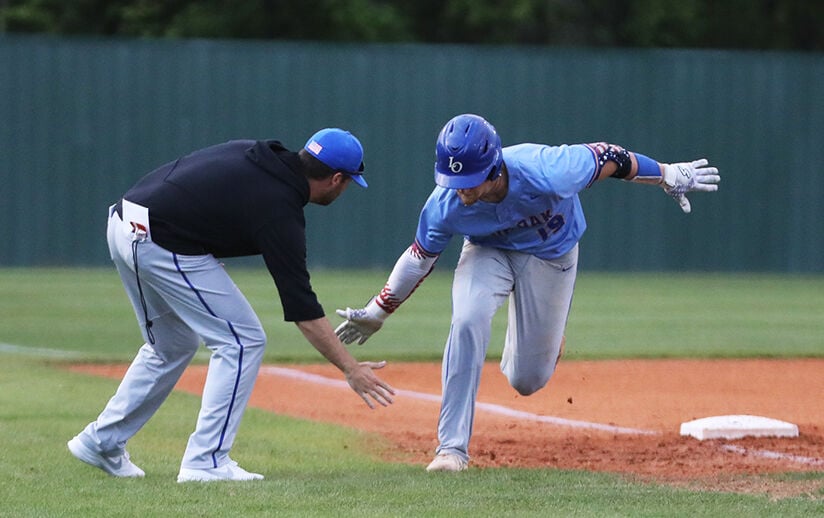 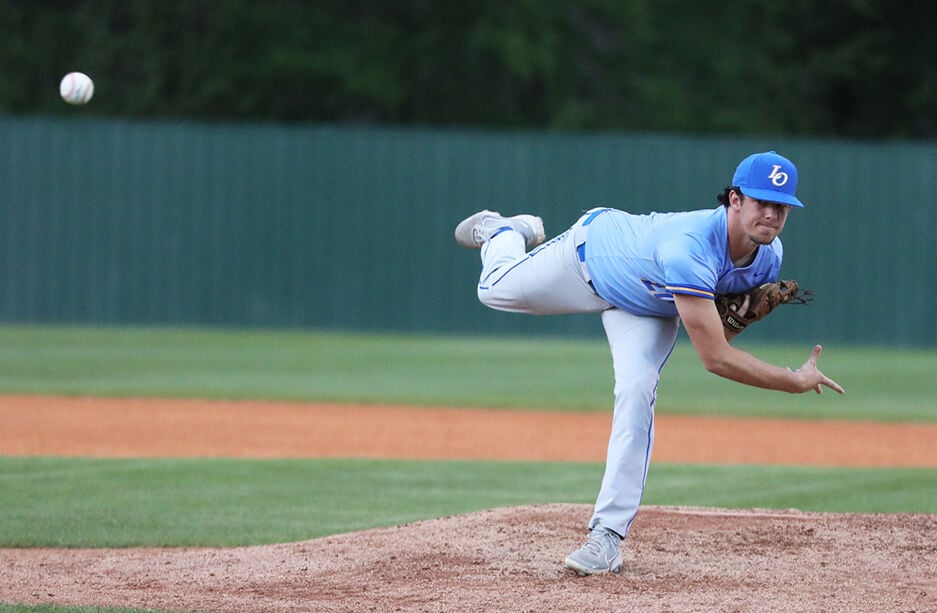 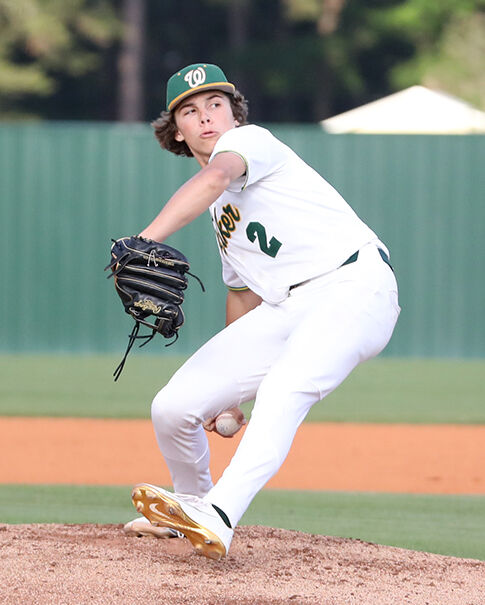 Walker High’s Grant Edwards winds up for a pitch during the Wildcats’ game against Live Oak High on Tuesday, April 6, 2021.

WALKER -- In a matchup of two of the top teams in the Class 5A power ratings, Live Oak used a familiar formula to pick up a win over Walker in District 4-5A play at Walker on Tuesday.

Michael Summers struck out six in relief, while the Eagles picked up a handful of key hits, including a solo home run from Blaise Priester, in an 8-4 victory.

“It’s a good team win,” Live Oak coach Jesse Cassard said after the Eagles, No. 3 in the Class 5A power rankings by Geauxpreps.com, moved to 23-4 and 3-0 in district play. “These guys (Walker), like I told them after, they’re 19-4 for a reason. They’re not just going to lay down. They’re solid in all three phases of the game.”

“We’ve just got to clean some areas up,” Walker coach Randy Sandifer said after the No. 6 Wildcats dropped to 19-5 and 2-1. “Like I told them before, these games and in the rest of district, there’s going to be two or three, four plays on one side or the other. We either prevent them from getting a hit or we get a hit in situations. Tonight, I felt like we just didn’t have that happen. We didn’t get the hit when we needed it, and they seemed to get the hit when they needed it.”

After Walker got a 4-6-3 double play to get out of the top of the first inning and Walker left the bases loaded in the bottom, the Eagles picked up the game’s first run in the top of the second after Luke Cowart and Gabe Ellison drew consecutive walks and Renton Childers followed with a hard single to third, giving Live Oak a 1-0 lead.

Walker starter Grant Edwards struck Cameran Christ and got Reid Broussard to line out to left field to end the inning.

The Wildcats grabbed the lead in the bottom of the second after Edwards led off with a walk and Cameron Crow walked with one out. Camden Carver followed with a single between first and second, driving in a run. The Eagles went ahead 2-1 when Mason Morgan reached on an error at second.

Priester led off the third with a solo home run to center field on a ball that seemingly hit the top of the wall and rolled over, tying the score at 2-2.

“I was already sprinting, so when I got to second, I was like, ‘alright, triple out the box,’ and the field umpire (signal a home run), and I was like, ‘oh my God, it actually went out the park,’” Priester said. “That was really big for us, creating that spark for us, getting us the momentum that we needed right there …”

“We came up in big spots, hit it, put the ball in play when we needed to, and that’s really all we could do,” Priester continued.

Grant Landry followed with a double, Kade Dupont had a bunt single, and Brant Smith grounded into a 6-4-3 double play to put the Eagles ahead 3-2. Luke Cowart doubled before Ellison grounded to first to end the inning.

Summers came on after Live Oak starter Tanner Roberts hit Gabe Inman to lead off the third and retired the side, allowing the Eagles to add to their lead in the top of the fourth. Roberts gave up two hits, two runs, three walks and struck out one in two innings.

“I had an idea I’d be coming in, but with a pitching staff like this, you’ve got all kinds of weapons,” Summers said after giving up three hits, two runs and two walks in five innings of relief. “You can bring anybody in at any time, and you’ll still have more for the next day. We go in, fill up the strike zone, don’t give up many hits, don’t give up many walks, you’ll win the ball game.”

Childers walked to lead off the inning, and one out later, Broussard singled and moved to second on the throw. Courtesy runner Hayden Everett scored on a passed ball, and Priester grounded to second to drive in another run for a 5-2 lead.

Walker cut the lead to 5-3 in the bottom of the fifth when Spencer Murray led off with a double and courtesy runner Gatlin Steele scored when Caleb Webb’s fly ball to left was misplayed with two outs.

Live Oak padded the lead in the sixth after Christ was hit by a pitch and Broussard walked with one out. Edwards was lifted for Casey Blake, and Priester reached on an error at second, making the score 6-3. Landry followed with a double to left, driving in two runs for an 8-3 lead.

“I tip my hat to our hitters,” Cassard said. “They did a really good job. Broussard doing a good job in the nine-hole kind of propelled us. He had been struggling for a while. They didn’t give us anything. Edwards, he’s good. He’s really good. He’s one of the better arms we’ve seen, but we stayed locked in and took his fastball away. You’re going to strike out a little bit with a guy that can throw like that, but I tell them all the time, if we don’t walk or hit anybody and make errors, we’ve got a chance to win every game because I feel really good about our offense.”

“You’ve just got to play with them and try to match them,” Sandifer said. “I thought when it kind of got away from 2-1, 3-2 and got a three-run gap, we needed to piece some things together there and kind of keep it at that with three innings to go. The couple runs they scored there in the sixth kind of put us in a bind there.”

“My command was not there tonight as I usually want it to be,” Edwards said. “I just felt a little wild. I think I could have pitched better today.”

Sandifer said Edwards is still trying to figure some things out on the mound this season.

“He’s picked up the velocity, and that’s changed some things with him a little bit, so he’s still trying to figure out how to harness the higher velocity, so at times, he gets a little wild,” Sandifer said. “I thought tonight, just from the pitching perspective, four of their runs walked to get on base. Let’s be honest about it, that’s the run differential of the game, where when we walked, they were able to work around it, but we did it early in the inning and they were able to manufacture those guys. Grant will be on the mound probably next Tuesday, so he’ll be better with that.”

Walker picked up the game’s final run in the bottom of the sixth after Carver drew a two-out walk, and Morgan and Murray followed with consecutive singles to center. Carver scored on an error on the second single, and Owen Forbes popped out to Priester to end the inning.

Bryant worked out of a bases-loaded jam in the top of the seventh after Smith singled and Cowart doubled to lead off the inning. Webb made a diving play at first on a bunt attempt by Ellison, and Childers grounded to first before Christ was intentionally walked and Broussard flied out to center.

Summers retired the side in the bottom of the seventh, getting a pair of strikeouts.

“Summers has been lights out,” Cassard said. “He’s done that over and over and over all year, so the team feels really confident with Mike out there.”