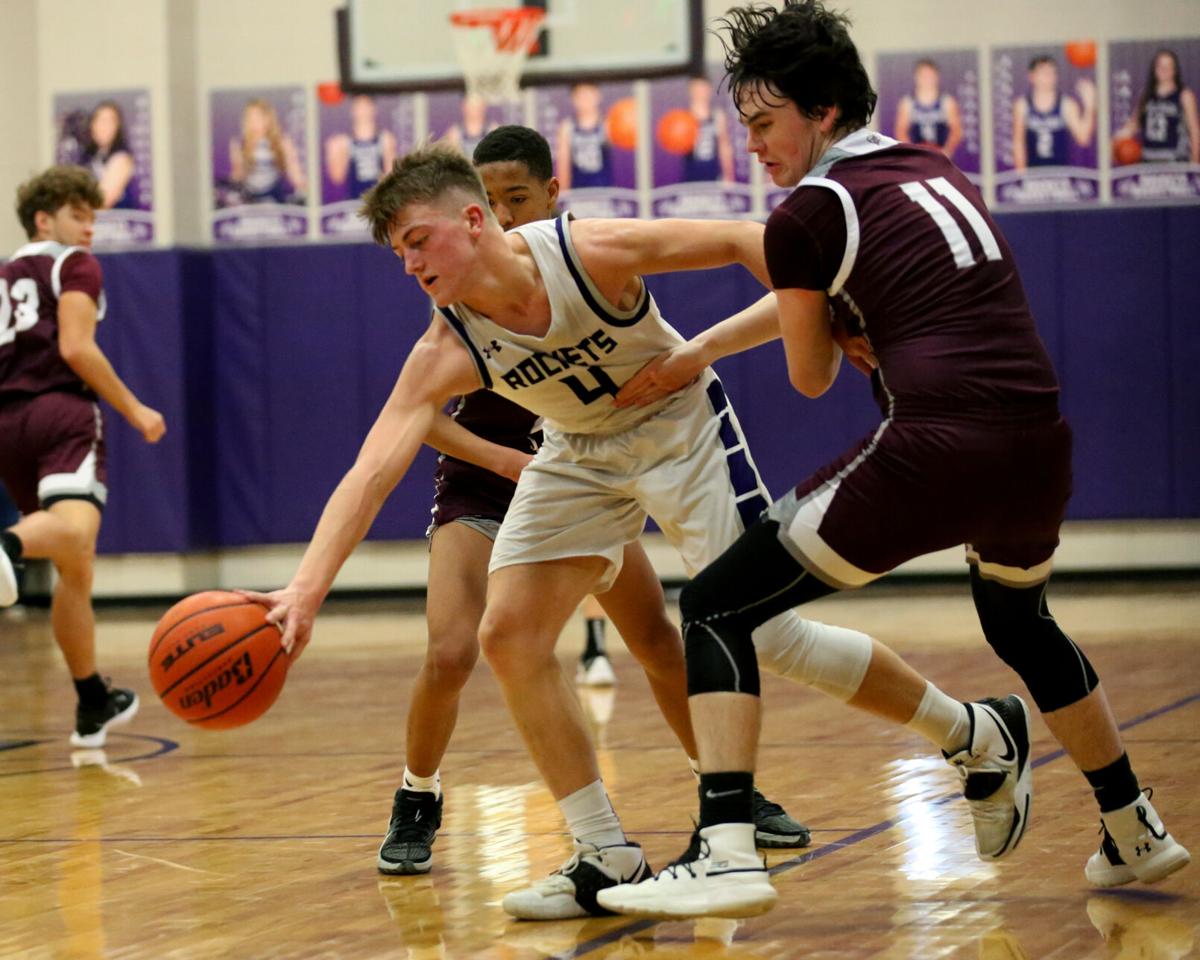 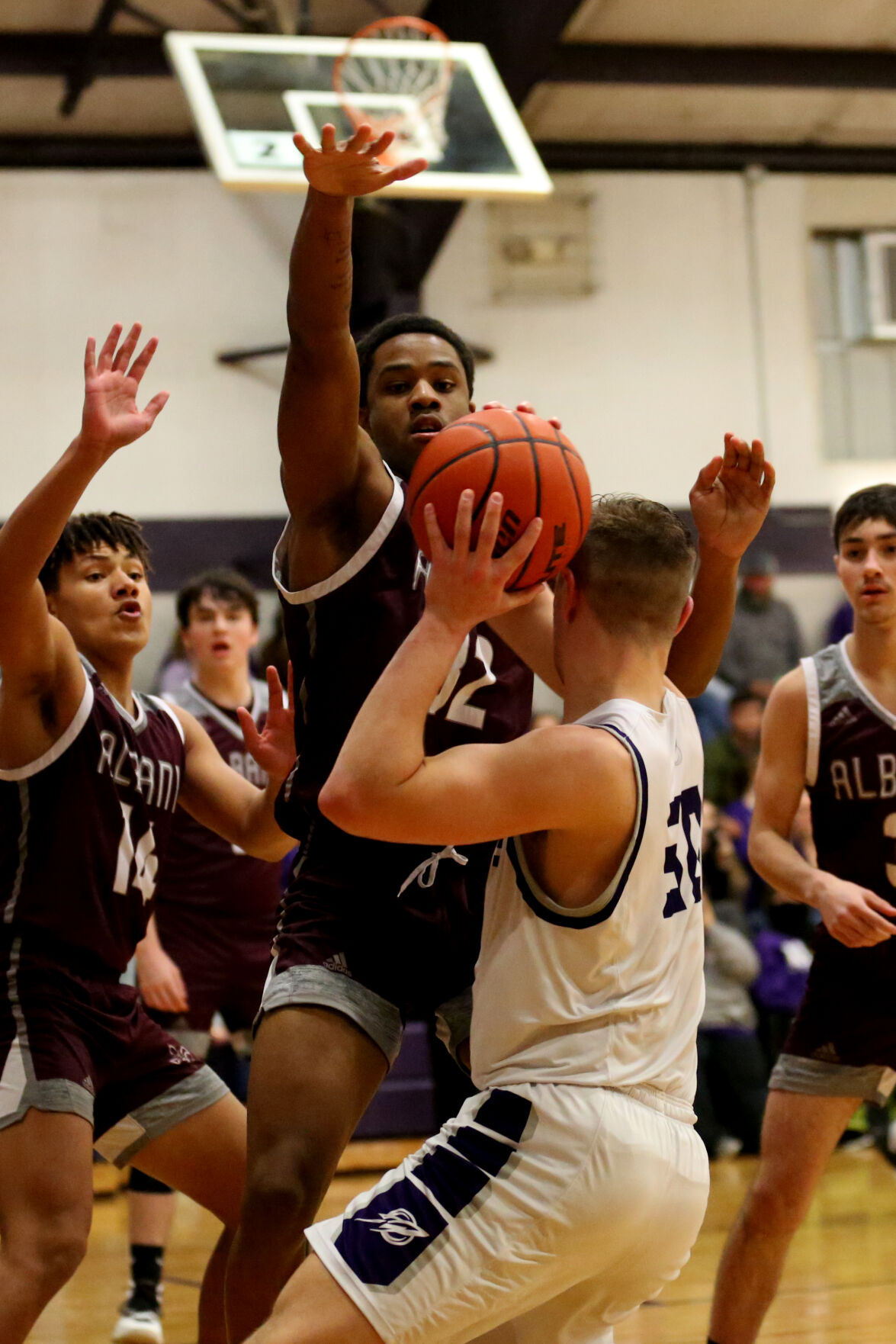 HOLDEN – Albany and Holden certainly picked a heck of a way to head into district play.

The Rockets got a piece of a shot by Albany’s Aidan Casteel as time expired, giving Holden a 51-49 win over the Hornets at Holden on Friday.

“No matter how good or bad the team is, it’s usually a tough game regardless, because they’re going to fight it out against each other,” Holden coach Landon DuBois said.

Albany coach Chris Carter said the Rockets’ experience was a deciding factor in the end.

“I looked on the floor, and I didn’t have any seniors out there at that moment, I’m looking at their baseline,” Albany coach Chris Carter said. “They’ve got seven seniors, and I had one tonight playing, and I think experience won in the game.”

“We told our kids that’s an experience or that’s a feeling that they don’t want to feel going into district again starting Tuesday (hosting Loranger), so just remember how it feels,” Carter continued. “We got the better of them last year and the year before, but it’s always tight. It’s tight.”

The finish was set up after Albany’s Abrahm Puma missed a 3-pointer with Albany up 49-48.

Holden’s Coley Courtney was fouled, hit the front end of a one-and-one, missed the second shot but got his own rebound, leading to his basket, which put Holden up 51-49 with just over a minute to play.

“I felt it when I shot it,” Courtney, who finished with 13 points, said of the second free throw. “I felt it was going left. It was a bad shot and immediately went for the rebound, got it, hit the shot, and I feel like it was a big momentum boost for the team.”

Albany turned the ball over, but the Hornets’ Jamarcus Williams came up with a steal that led to another turnover for the Hornets.

Courtney was fouled with 26.4 seconds left and missed the front end of another one-and-one. Albany got the rebound, and Carter called a timeout with 17.6 seconds left.

The Hornets worked the ball around, and Albany’s Destin Gentry fired off a 3-point attempt that missed just as Carter called another timeout with 5.6 seconds left.

“I thought we played hard and played to win,” Carter said. “It’s not like we played to lose. I tried to draw up a three at the top of the key to win it right there. On the road, they say you play to win, so that’s what we’re trying to do, but they had a pretty good defensive strategy right there on us.”

After the timeout, Gentry got the inbounds pass to Casteel, who attempted a shot in the lane, which the Rockets got a piece off. Casteel got the ball back but was unable to get another shot off before the final buzzer.

“(We’re) just trying to get somebody open up top, allow them to penetrate and kick,” Carter said of the plan after the second timeout. “It just all boils down to experience, knowing what I’m telling them, knowing how to read what I’m drawing up.”

Albany’s J.J. Doherty was fouled on a 3-point attempt and made one free throw. That enabled the Rockets to pad the lead on Dylan Gueldner’s three-point play for a 46-41 edge with 4:36 to play.

“We want to play fast,” DuBois said. “We want to play really fast. That’s our goal, but we also preach that when we don’t get anything in transition, there’s no need to just throw up a shot. We want to play fast in transition and then slow in the half court, and sometimes we get those two things mixed up. Tonight, we had them mixed up for a little while, but thank God we got our wires uncrossed and figured out, especially late in that game. We slowed it down and got good shots, and I think that was a big part of that.”

Albany’s Dylan McAlister had a steal and layup before Doherty fouled out with 3:29 left in the game. On the same play, Gueldner was called for a technical foul.

Gueldner missed both of his free throws, but McAlister connected on his, and Williams’ basket put the Hornets ahead 47-46.

From there, the lead changed hands twice before the finish.

“Once J.J. fouled out, it became kind of a swing right there inside,” Carter said. “We couldn’t get anything going inside once that happened.”

Doherty finished with 15 points, and the Hornets went 11-for-18 from the line in the game.

Holden led 25-21 at halftime, and the early stages of the third quarter featured two ties and two lead changes, with the Hornets pulling ahead 31-27 on Sidney Benion’s basket.

Holden, however, got a trio of 3-pointers from Braeden Wascom and a basket from Nick Forbes to take a 40-36 lead before Doherty’s basket cut the advantage to 40-38 going into the fourth quarter.

The score was tied at 11-11 at the end of the first quarter, but McAlister, who scored eight of his 12 points in the second quarter, helped spark a burst which put the Hornets ahead 19-14.

Albany led 21-15 on Seth Hoffman’s free throws with 2:02 to play in the first half, but Courtney converted on a three-point play, and Gueldner scored seven straight points, putting the Rockets ahead 25-21 at halftime.

Gueldner and Nick Forbes each finished with 11 points.

“We kind of came out dead energy-wise,” DuBois said. “I think, again, that zone really kind of threw us for a loop. It just messed us up mentally. Once we settled down and he (Gueldner) started bringing some energy, good things happened. When he brings energy, he brings energy. He’s got a lot of it. He attacks and he got real excited, and that helps make us go. When his motor’s going, we’re going.”