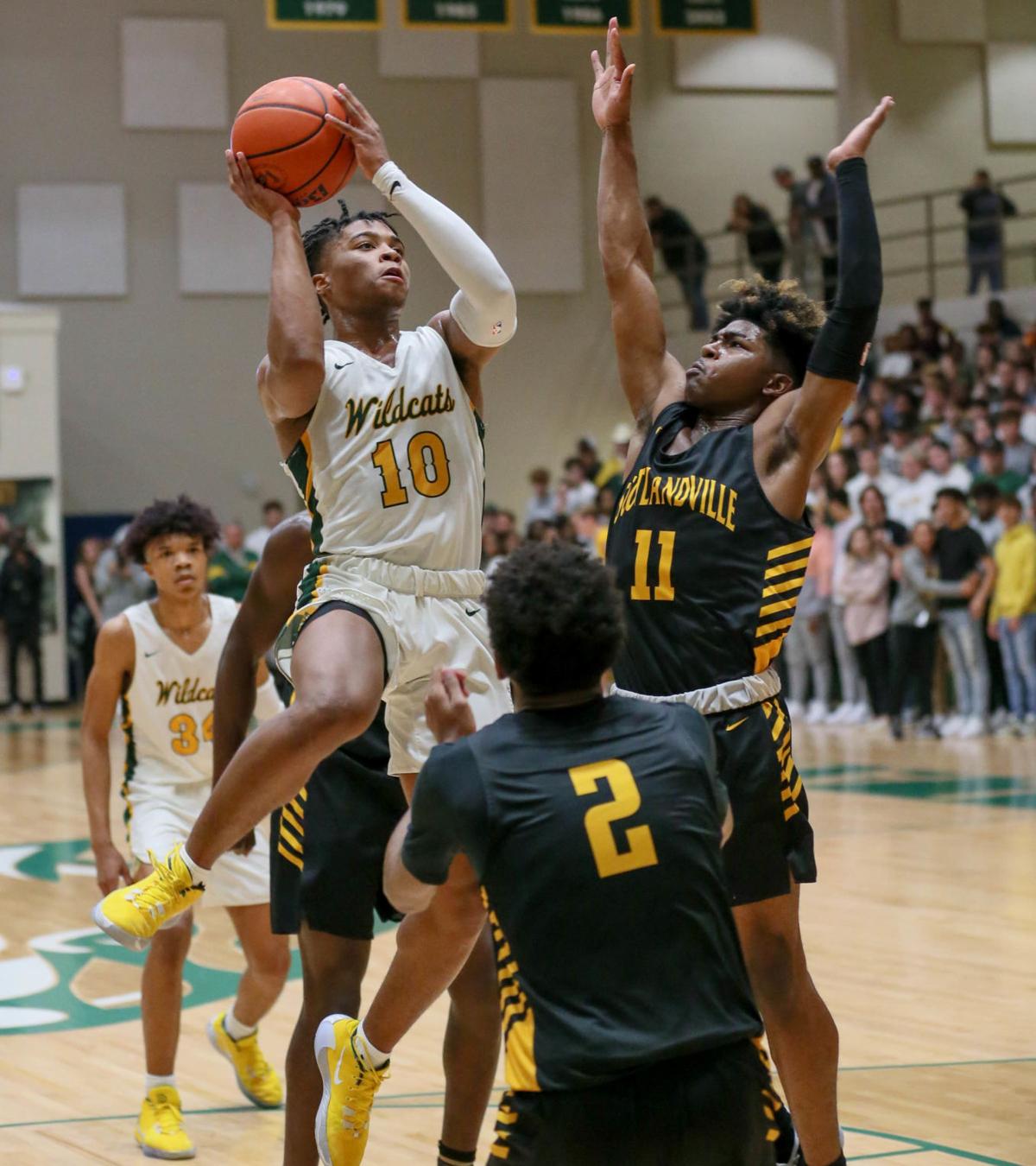 Jalen Cook (10) of Walker High puts up a shot over Scotlandville's Carvell Teasett (11) and Reece Beekman (2). 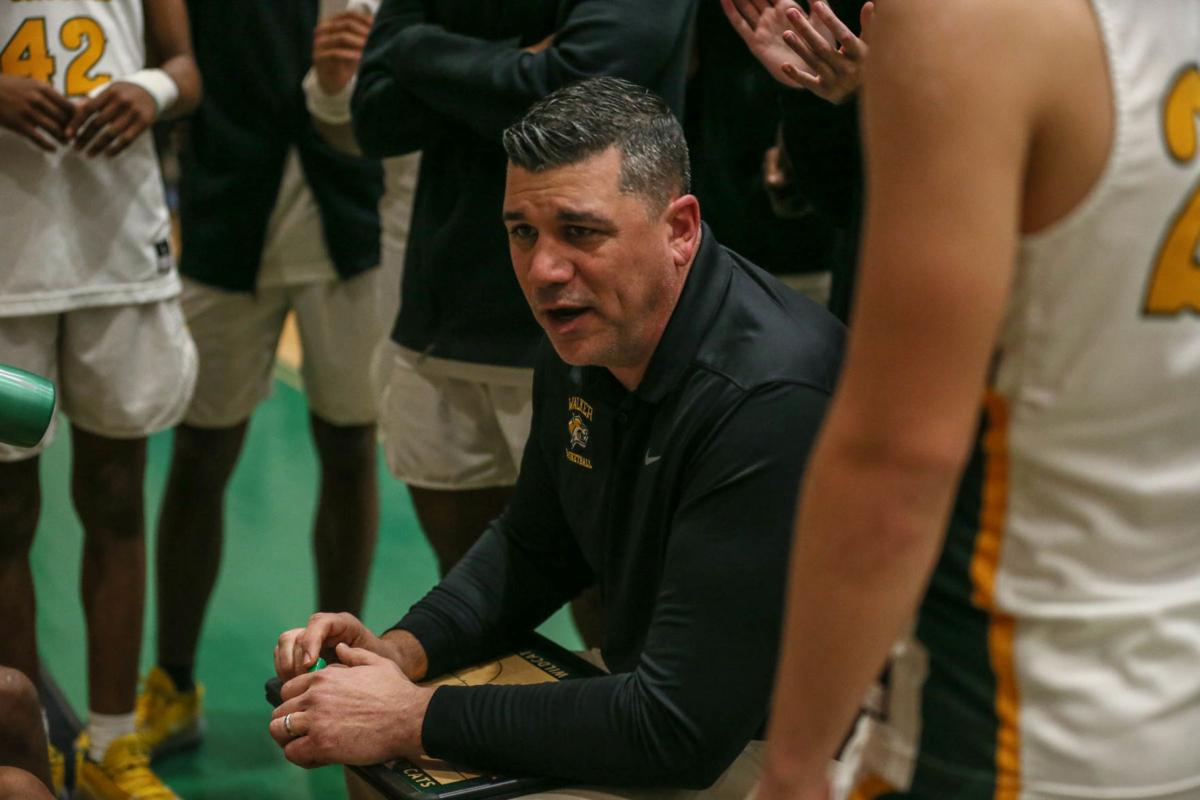 Walker High coach Anthony Schiro meets with his team during a timeout. 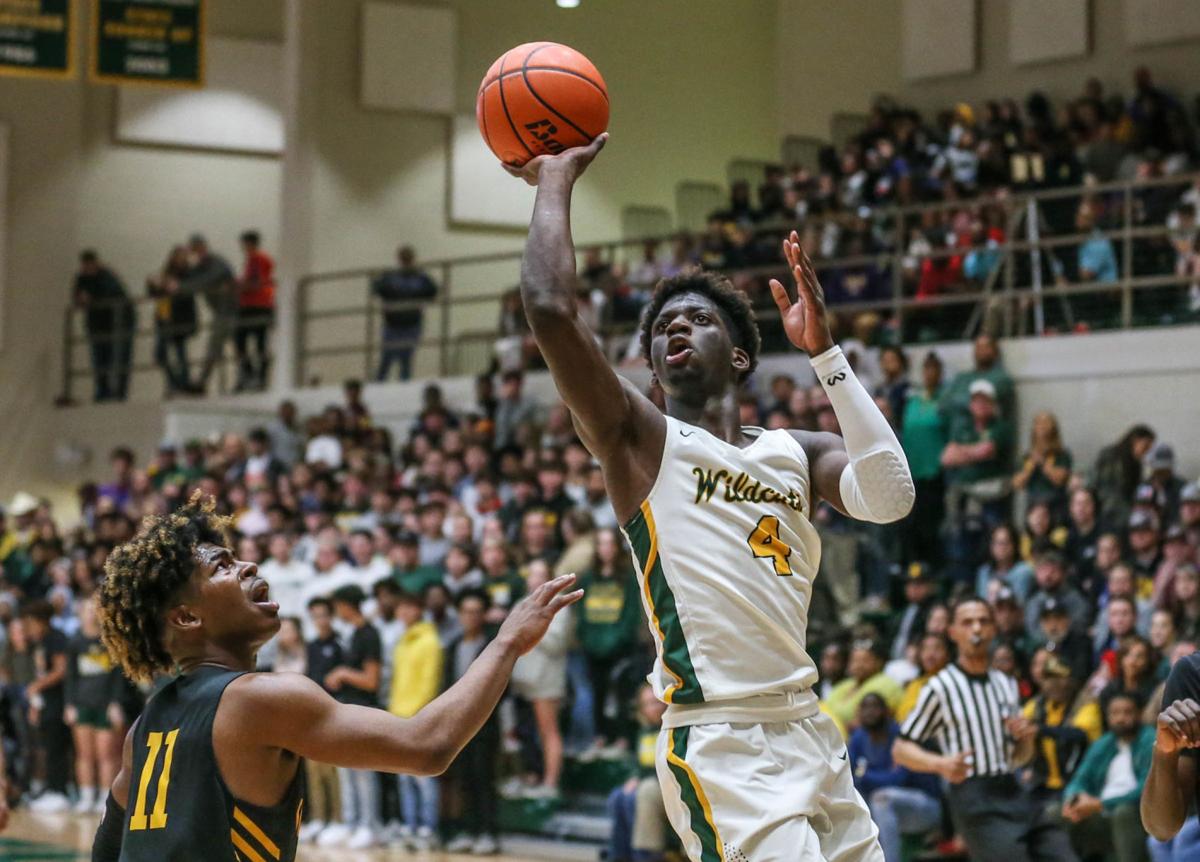 Jalen Cook (10) of Walker High puts up a shot over Scotlandville's Carvell Teasett (11) and Reece Beekman (2).

Walker High coach Anthony Schiro meets with his team during a timeout.

WALKER – From Walker High’s perspective there was a small margin for error in order to repeat the feat of last year’s monumental victory over Scotlandville.

The Wildcats paid dearly for their early misgivings in Friday’s rematch, something they never recovered from.

Scotlandville, which has six state championships to its credit over the past decade, swung a mighty blow with a 16-2 first-quarter blitz against Walker High. The Hornets never allowed the Wildcats any closer than eight points in a 70-54 victory Friday during the District 4-5A opener for both teams before a capacity crowd of 2,200 at the Wildcats gymnasium.

“We probably couldn’t have had a worse start in the first quarter,” Walker coach Anthony Schiro said. “I thought we had some good looks and couldn’t put the ball in the hole. Scotlandville’s a great team. They’re flying around, making it difficult. I would have never imagined we would have been held to two points in the first quarter.”

Walker (20-7) registered a 69-65 road win over Scotlandville last season which they rode to the school’s first district championship since 1978.

Scotlandville (26-3), ranked 15th nationally by MaxPreps.com, had a long memory. The Hornets never trailed in the rematch, had three players in double figures led by Tai’Reon Joseph’s 26 points and halted the Wildcats 14-game winning streak in the school’s new gymnasium.

“They didn’t need a pep talk; they’ve been waiting 365 days,” Scotlandville coach Carlos Sample said. “The guys played like they wanted to win but hats off to Walker.”

The Wildcats, who were 1-of-14 from the field in the opening quarter, missing their last 12 straight attempts and turned the ball over five times, responded by nearly playing on even terms over the final three quarters where the Hornets held a slight 54-52 edge.

“We came out not making shots and they came out with a lot of energy and we didn’t match it,” Walker senior point guard Jalen Cook, who scored 16 points but was limited to 4-of-23 shooting, including 1-of-11 from the 3-point arc. “We just didn’t have a good shooting night. They did a good job of going hard in transition. We didn’t really play well with our transition defense. We have to bounce back.”

Joseph is part of Scotlandville’s dangerous backcourt trio with Virginia signee Reece Beekman (19) and Carvel Teasett (15) who combined for 60 of the team’s points.

“We had a hard time putting the ball in the hole and had probably statistically one of our worse games of the year shooting the ball,” Schiro said. “After the first quarter we’re right there the rest of the game. They’re such a well-oiled group on both ends. They’re patient and get everyone involved and defensively they move as a unit. That’s a great example of team defense.”

Thomas scored six points and Cook added a pull-up jumper from the baseline, ending a personal 0-of-6 drought, to bring Walker within 21-11 midway through the second quarter.

The Wildcats later went on their best run of the half, with Cook’s 15-footer beginning an 8-2 spurt with Warren Young Jr. contributing a steal and layup and Thomas capped with a free throw, reducing the Hornets lead to 25-18 with just over two minutes to go before halftime.

Scotlandville closed the half on a 7-1 run with Teasett scoring four points and Joseph adding a slam dunk following a turnover that made it 32-19.

With 12 of his team’s 19 points in the opening half, Thomas went back to work in the third quarter with a free throw and fed Donald Butler Jr. for a layup that reduced Scotlandville’s lead to 32-22 less than a minute into the quarter.

“After the first quarter, we cut the lead down and they got it back,” Schiro said. “It was a game of runs back and forth. The last three quarters were about as even as you play.”

With Joseph scoring 11 points in the third quarter, including three of his four 3-pointers, Scotlandville gained a 48-31 advantage.

Walker, which didn’t help its cause with 15-of-23 free throw shooting, got as close as 11 points in the fourth quarter on four occasions but Beekman answered with baskets three times and had nine points in the final quarter.

“They’re all good guys,” Cook said of Scotlandville’s three guards. “It’s kind of hard to just deny all of them. They can all shoot. They’re whole team is experienced, and they did what they were supposed to do.”