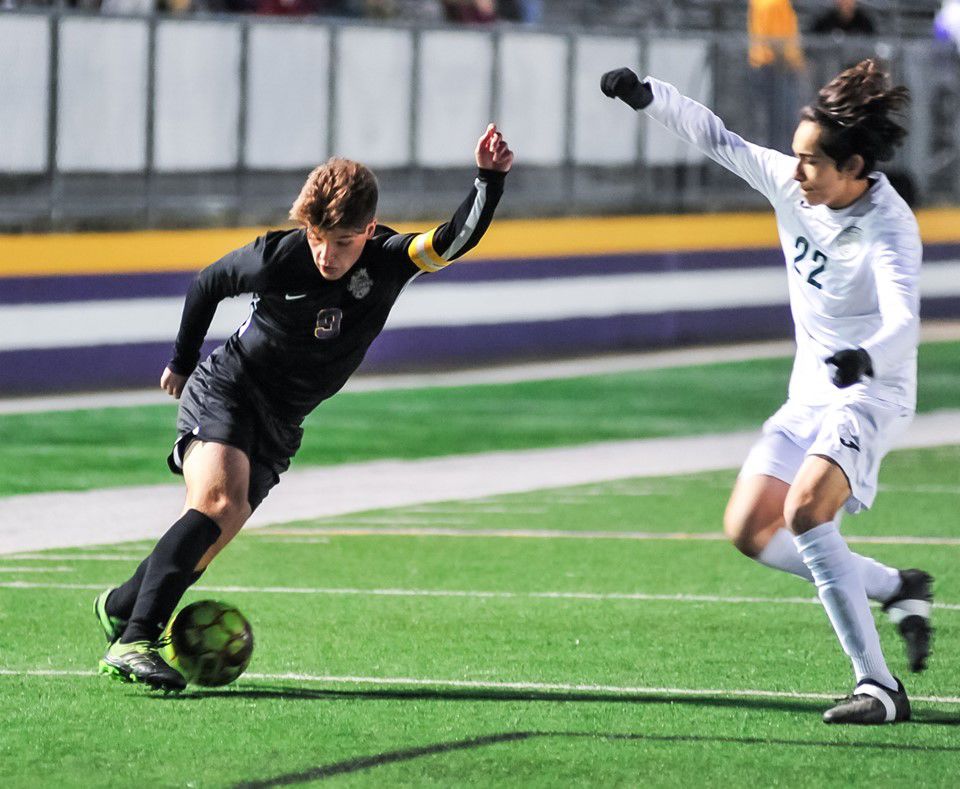 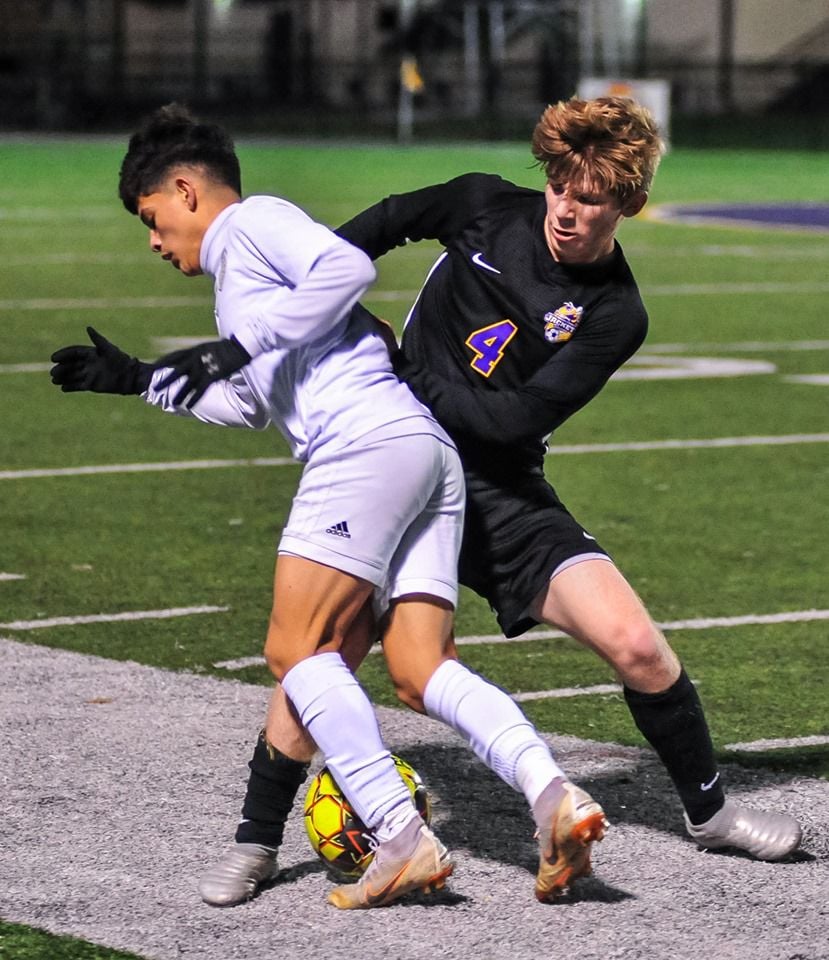 Denham Springs' Brennan Amato (4) stops a Grace King player and tries get possession of the ball. 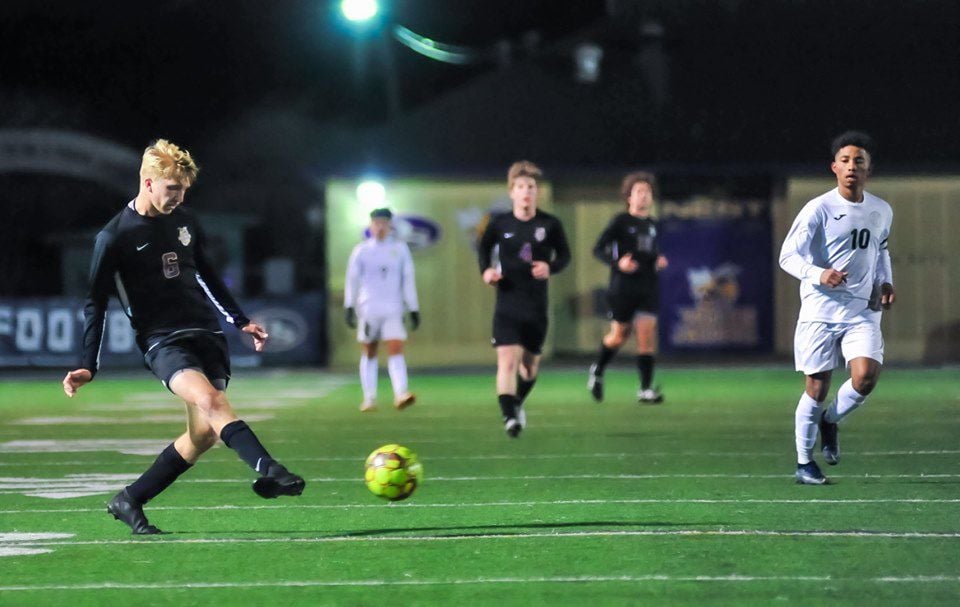 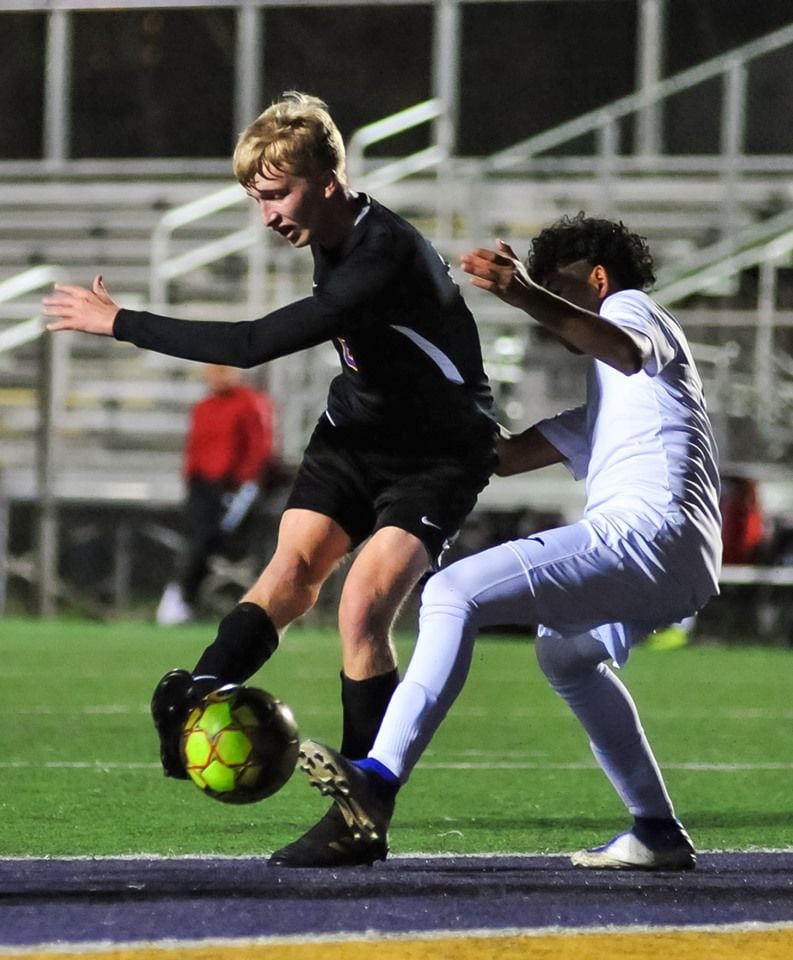 Denham Springs High's Jon Baio (6) tries to get a shot off around a Grace King defender.

Denham Springs' Brennan Amato (4) stops a Grace King player and tries get possession of the ball.

Denham Springs High's Jon Baio (6) tries to get a shot off around a Grace King defender.

DENHAM SPRINGS – At first thought Denham Springs’ Brennan Amato wasn’t certain he could even get to the airborne ball.

With a corner kick from Will Chevalier fluttering through the chilly evening, Amato was positioned on the left side of the goal in the six-yard box. Not only was he able to settle the ball, but quickly fired a shot with an upward trajectory that sailed straight into the raised hands of a Grace King defender.

The sequence resulted in a handling call against No. 18 Grace King and because it occurred in the penalty box, Denham Springs was awarded a penalty kick which Chevalier kept on the ground into the right side of the goal, snapping a scoreless tie in the 60th minute to send the No. 2 Yellow Jackets on their way to a 4-0 victory in Thursday’s Division I state regional playoff.

“At first I didn’t I could get to it, but I knew I was going to have to take a quick touch,” Amato said. “I thought I was going to miss and shot it right to the guys’ hands. It was a good momentum shift for us. It was tied most of the game and we needed that spark.”

Denham Springs (19-7-1) went on to score a total of four goals over the final 20 minutes of play, including one each from Amato and a second from Chevalier, to earn the program’s third straight trip to the state quarterfinals.

The Yellow Jackets will travel to Shreveport next Tuesday to face No. 23 Captain Shreve which upset No. 7 St. Amant, 2-1 in double overtime.

“This team amazes me,” Denham Springs coach Chris Thorne said. “The maturity of the sophomores coming in and the senior class stepping up and leading in their roles. It’s amazing how much this team has jelled and had success. It’s not the coaching. It’s the players.”

Denham Springs held a 1-0 lead until pushing its lead to 3-0 within a span of a minute in the 71st minute.

Not long after replacing an injured Noah Hood, sophomore Aristides Chavez helped provide his team with some breathing room with a nifty pass across the field to Amato, who won his one-on-one battle around the goalkeeper and scored.

Chevalier picked up a brace when he ran onto a through ball inside the 15-yard line, went to his right to get around a defender and made it 3-0.

“The first goal opened the game up for sure and then the floodgates opened,” Chevalier said. “Once we were up 1-0, we knew they had to chase the game and that left them free in the back, so we took advantage of it and we put three more in.”

Sophomore Jon Baio capped his team’s scoring by driving down the right side, cutting inside a defender and firing a shot from 25 yards out that beat the goalie into the left corner.

It was quite a contrast to the first half where Denham Springs, which was playing for the first time since wrapping up the District 3-I title Feb. 4 with a 4-0 win at St. Thomas More, encountered some difficulty going into a stiff wind.

DSHS put seven of nine shots on target in the opening half and wound up with 12 of 17 shots on goal.

The Yellow Jackets, led by center backs Luke Restivo and Conelly Herrin along with goalkeeper Tyler Burkett (5 saves), limited the Irish (16-4) to four of six shots on goal with two of those coming in the latter stages of the second half.