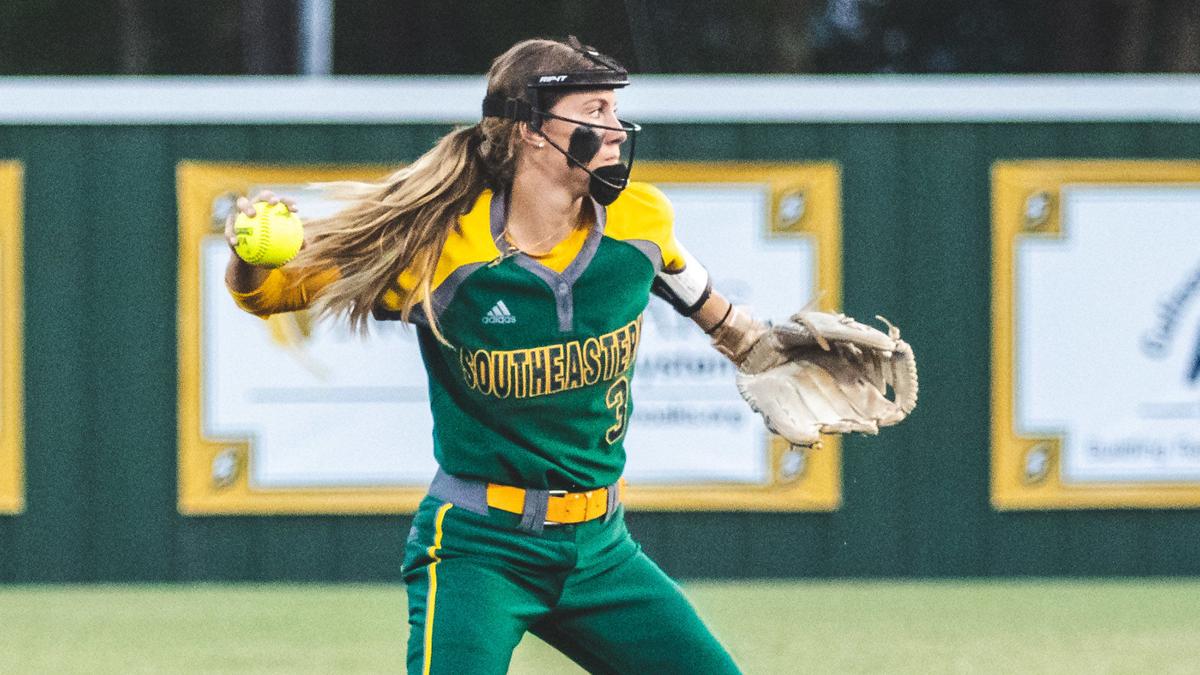 And it may have happened a little by accident.

“I was leaving the park, and I saw her drop a bunt down and then steal second, third and score, so I sat down, and she made all the plays at shortstop,” Fremin said of seeing Rizzo play with the Blazers travel team. “I said, ‘OK.’ At that point, I’m asking the coach, ‘Who is that?’, and one of the assistants was her dad, turned to me and said, ‘We’ve been emailing you.’ I said, ‘well, I can’t comment on that, but I’m here now asking about her.’ We laugh about it and joke about it.

“I remember that day. She did everything that we need her to do as someone being on the left side of the plate and playing the shortstop position. Typically, we recruit catchers, pitchers, shortstops and center fielders, and I look at speed, I look at athleticism,” Fremin said. “She had the speed and athleticism.”

To say those traits served Rizzo well as a freshman Southeastern may be an understatement as she batted .322 and stole 27 bases.

“I didn’t expect to have this much success to be honest,” Rizzo said. “I was just kind of being me.”

Rizzo said the seeds for her freshman campaign were sewn during fall workouts conducted by Fremin and his staff.

Rizzo’s offense materialized quickly for the Lady Lions, collecting four hits in her first two games on her way to 14 multi-hit games last season with 15 RBIs.

“It was just kind of something that happened,” Rizzo said of her offense last season. “So at the beginning of the year, I felt like I was on. I was like ‘I’m not letting this ball get by me’ when I was hitting. I was like, ‘I’m touching the ball. I’m not striking out’, and I felt like my mindset was set right.”

“I told Ramon, ‘ … look, we’ve worked with you. Teach her everything you know’” Fremin said. “They were both on the left side of the plate. Ramon did a great job on mentoring Rizzo both at the shortstop position and at the top of the lineup as a baserunner, and I think that really helped allow her to be accepted and settle in.”

Rizzo posted a .964 fielding percentage and finished sixth in the Southland Conference with 118 assists on her way to honorable mention All-SLC honors. She also missed approximately three weeks of the season with a concussion during the teeth of the league schedule.

“We won seven of the nine series, and I’m going to probably tell you we probably grab another series if she’s in uniform,” Fremin said.

It’s Rizzo’s consistency Fremin is expecting this season when Southeastern opens its Lion Classic starting Friday at North Oak Park in Hammond. They’ll face Buffalo at 4 p.m. and Alabama State at 6 p.m. and return Saturday at 4 p.m. against Buffalo and UT-Martin at 6 p.m. The Lady Lions face Grambling at 2 p.m. Sunday to wrap up the tournament.

“We all want her to stay healthy, so that would probably be the top priority at the top of the list,” Fremin said. “I think she’s going to do what she does regardless or the moment, the big games, the games – not that they’re not all important – but the mid-weeks that not a lot’s riding on them compared to the conference series or some ranked team coming to town or us in their house.”

The Lady Lions went 34-23 last season and return junior catcher Ella Manzer, junior outfielder Madisen Blackford and senior pitcher Alley McDonald, who all earned preseason first-team All-Southland honors, but there’s a little motivation after the Lady Lions, who must replace starters at first, second and third base, were picked fifth in the league’s preseason poll.

“After the poll came out, we came into a meeting the next day and he (Fremin) basically told us ‘this should be motivation for ya’ll,’” Rizzo said. “Yeah, it’s fifth, but let’s prove them wrong. I shouldn’t have to give ya’ll any motivation. This number doesn’t mean anything. It’s more of what you reflect on the field.”

Rizzo said she’s ready to get her sophomore season started.