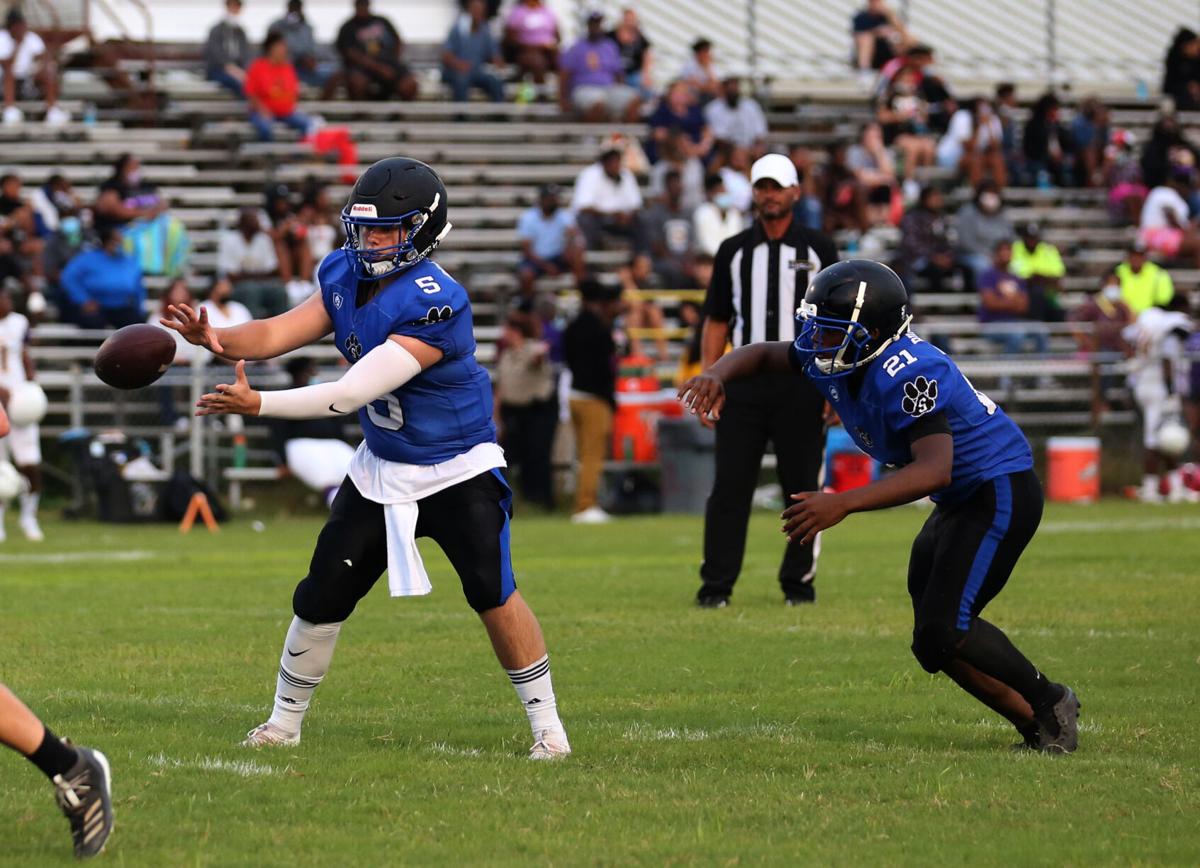 Springfield's Seth Grand (5) gets the snap as Jatorius Buggage anticipates the handoff against Independence.

Springfield's Seth Grand (5) gets the snap as Jatorius Buggage anticipates the handoff against Independence.

Sure, Albany and Springfield is a rivalry, but for this version of the Battle of I -12, the coaches for each team are more focused on their teams getting better while navigating trying circumstances in the wake of Hurricane Ida.

“I know as a coach, I could care less about the actual rivalry part of it,” said Springfield coach Ryan Serpas, whose team hosts Albany at 7 p.m. Thursday. “That’s more for the kids and for the community. I’m just trying to do everything I can to make sure our kids are prepared the best that they can be for the upcoming game. If anything, having a short week really frustrates me because that’s one less day we have to prepare, especially dealing with the same circumstances that we’ve been under. This is the next game, and we’re trying to approach it that way …”

“I know about the rivalry because I coached here, but in my lifetime, rivalries aren’t a big thing for me,” Albany coach David Knight said. “I want to win every game I play, and I don’t want to lose any of them. I’m sure Ryan is the same way.”

“It’s a good game,” Knight continued. “It always is. Both teams play hard. They always have.”

The Bulldogs are coming off a 56-8 win over Broadmoor in which Jatorius Buggage rushed for 190 yards and three touchdowns and Ivan Fletcher caught two touchdowns.

“There’s still some little things that we can improve upon in the running game, as successful as we were,” Serpas said. “Even in the passing game, I felt like we had some balls that were dropped at times. We just think that there’s a lot of room for improvement, and the more these kids continue to work together, the better we’re going to get going down the road. That’s our goal is to just try to improve a little bit each week and that they buy in and they understand what we’re doing whenever we’re watching film and trying to correct mistakes. The ceiling on these guys hasn’t even been set yet.”

“We really think that we do have some serious weapons that can be dynamic and can change ball games in a hurry,” Serpas said.

Meanwhile, Albany is coming off a 34-0 loss to St. Michael with Knight noting the Hornets were shorthanded with players missing for various reasons. Knight also noted the Hornets have started a different offensive line in every game since the spring game.

“I thought we were better than we were,” Knight said. “We had worked so darn hard, and we had worked so long and so much, I just expected it to flow, and at the end of the day, probably half of our team had never been on a high school field before the other night.”

“I know every coach says this, but the game really wasn’t as big of a blowout as it looked on paper,” Knight continued. “You can define it by just a couple of key plays.”

Defensively, Serpas continued to praise the play of linebacker of Ayden McAlister.

“He’s grown leaps and bounds from what he was able to do as a sophomore,” Serpas said. “Week in and week out through drills at practice and just doing the little things right, he’s a great kid. He’s a high-character kid. As a coach, you get excited for kids who always do the right thing or do things the right way and then they become successful. He’s one of those kids who has really done a great job. He’s first two years were kind of learning years of what we expected from that position, and he’s really done a great job of turning it on to be that dominant force in the middle now.”

“He flows to the ball really, really well,” Knight said. “I was telling Ryan (on Tuesday) I wish I had five or six like him that flowed that hard to the ball, and he attacks very well. They’re probably a little taller than us and a little faster than us.

“They potentially can give us trouble just with their size and speed,” Knight said.

“Those guys controlling that front line and allowing Ayden to run around and make plays was a huge factor as well,” Serpas said. “He definitely benefitted from some solid defensive line play.”

“We had a couple of kids who came in and spot played as well who did really good as well to help us be successful too, so the fact that I’m creating reps and things and we’re not even at full strength right now just speaks to the potential that we have,” Serpas said.

Knight said the St. Michael game was a learning experience for the Hornets on defense.

“Defensively, I thought we were prepared,” he said. “I thought we were ready, and we had some young guys make some mistakes. We had some key guys we thought would step up and lay a lick, and they didn’t. It’s just one of those deals. When I got there, I told you we wanted to be aggressive and we wanted to be physical, and we wanted to hit people. We got all of that done to us the other night. We weren’t the most physical team, and we didn’t hit them first. It hurts your feelings because we want to be that team, and we worked hard this summer to be that team, but it just didn’t happen the other night. We’ve got to just kind of regroup on both sides of the ball right now.”

Serpas is hoping to have Camden McCann, Malik Cooper and Colin Parsons back for Thursday’s game.

“If we get those three back, that kind of puts us really almost at full strength from what we were for the jamboree,” Serpas said. “With those guys, I think that we become now more of a complete team.”

Despite the result of its game last week, Serpas isn’t taking Albany lightly.

“I did watch them in the jamboree (against East Iberville), and I saw them be a very successful and good looking team, so I know what they’re capable of. I know what (Albany quarterback) J.J.’s (Doherty) history is. He’s kind of been a thorn in our side for the last several years it seems like. It seems like the kid’s been in high school for six years now.”

“They played a very solid St. Michael team, and we know what Albany’s capable of, and we know the intensity that they’re going to bring coming into our stadium,” Serpas continued.

Knight said he was impressed with the Bulldogs’ effort last week.

“They put 56 points on the board last week,” he said. “They’re not a bad team. It doesn’t matter if you’re playing yard ball or you’re playing out there by yourself. When you put up 56 points, that’s a pretty good effort right there. They drove the ball up and down the field on Broadmoor, and they stuck it in Broadmoor’s face. Broadmoor runs the same offense we run. They were right there in Broadmoor’s face the whole night. Looking at them, it’s not going to be an easy game …”

Knight said a rainy forecast could be the difference in the game.

“It’s just one of those deals where right now, the bigger, stronger, tougher guys up front are going to win this thing because the rain is going to shut everybody down, and it’s just going to change your whole game plan,” he said.

Serpas also knows what’s coming from the Albany defense, and he said the Bulldogs’ success will hinge on the decision making of quarterback Seth Grand and the team’s ability to establish its running game.

“They’re real aggressive,” Serpas said. “They like to try to crowd the line of scrimmage and come at you. For us, we’ve got to be quick with our decision making. I do think that we will have opportunities to make big plays, but whenever we do have those opportunities we capitalize on it and make sure that we’re doing everything that we can to be successful and complete in what we’re doing.”