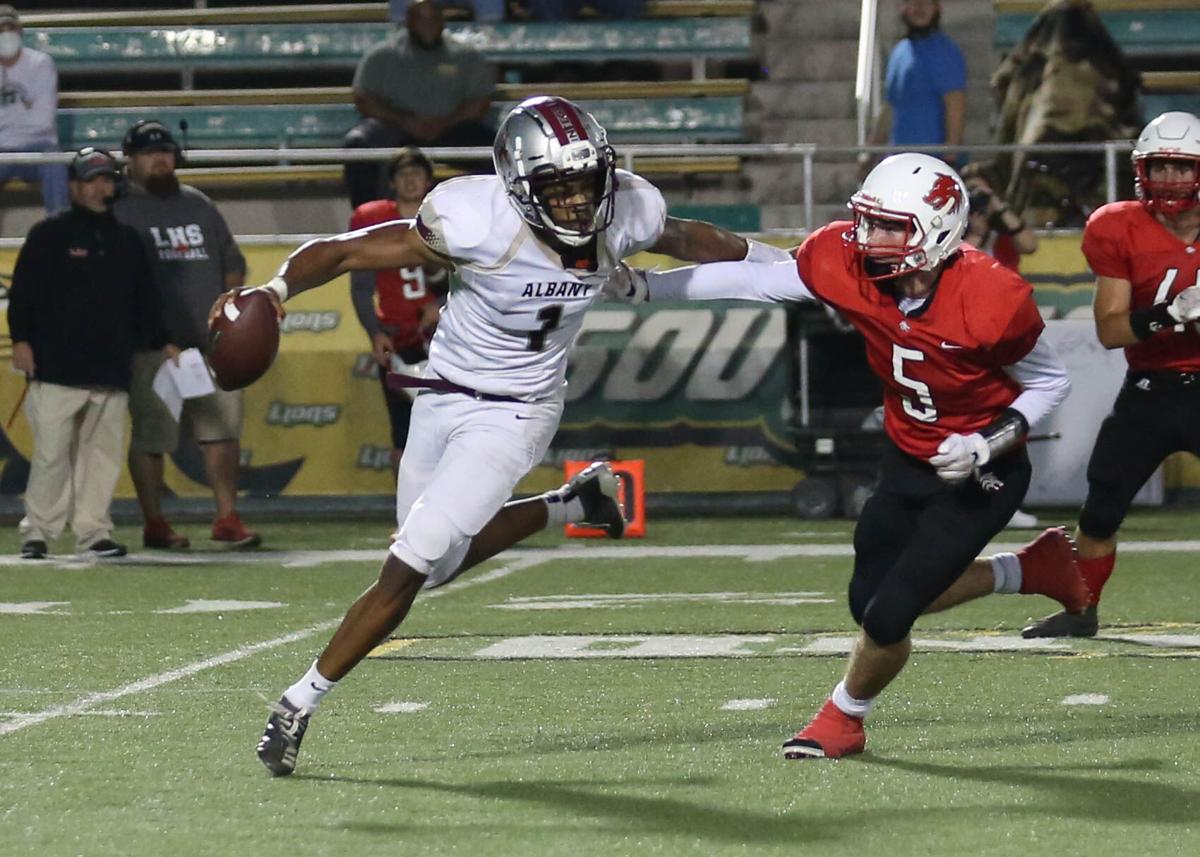 Hornets quarterback JJ Doherty scrambles and fends off a Loranger defender to get a pass off. 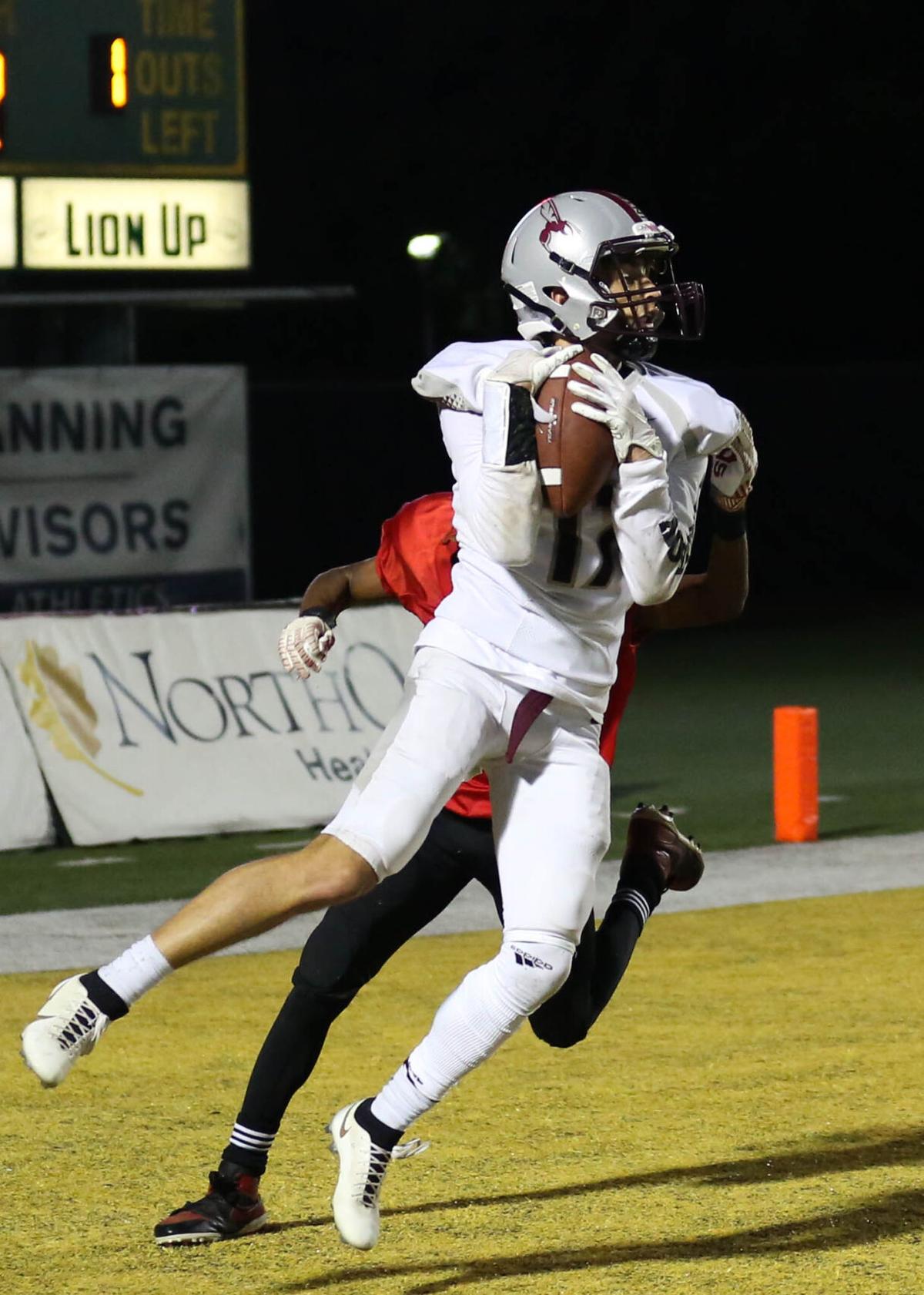 Mikey McCahill (17) brings in the 2-point conversion after his touchdown catch.

The Albany football team’s push toward the postseason may have picked up a lot of steam on Friday.

The Hornets jumped out to a commanding halftime lead and cruised to a 63-21 win over Loranger in District 8-3A action at Southeastern’s Strawberry Stadium.

Albany travels to Beau Chene for a non-district game next week before wrapping up the regular season against Archbishop Hannan, which scored a 30-6 win over Sumner on Friday.

“We talked after the game about coming out this week and preparing for Beau Chene, but also setting the tone for how we’re going to prepare for the rest of the season,” Albany coach Mike Janis said. “We wanted to set a mood here that resembled the playoffs. Every game matters. Every game is important, and we don’t just want to play that extra week. We want to see how far we can go, and I think the guys had a great attitude going into (Friday), and they know what’s at stake. They understand the loss to Sumner was a big deal, but they also understand that Sumner losing tonight still keeps the door open for a possibility of a district championship. You’re looking at an opportunity at a three-way tie, and where there’s hope, we will hope, so we’re going to go out and try to prepare this week for that non-district game and try to get better with that expectation of hosting Archbishop Hannan in Week 8 and playing for a district championship.”

Albany (4-2, 2-1) got the scoring started on a 47-yard touchdown run by Tyrese Wilson. The Hornets failed to convert on the two-point conversion, but Janis said the big play helped set the tone for the game for his team’s offense.

“I think it affirms what we’re doing offensively, that the game plan is sound and that it’s going to work, and it just creates that buy-in,” Janis said. “I said this after the game – that’s probably the best first half of football that we have played since I’ve been here. We’ve had some good games. We’ve played well, but I don’t know that we’ve played a first half of football that complete since I’ve been here. To score 42 points in the first half was pretty nice.”

Loranger got strip fumble for a touchdown and connected on the PAT for a 7-6 lead, but the Hornets responded with an 11-yard TD pass to Reece Wolfe to take a 12-7 lead.

Loranger ran a play, and the Hornets recovered a fumble at the end of the first quarter, and after an Albany punt, Loranger scored on a 78-yard run to cut the lead to 20-14.

“We were on top of the ball,” Janis said. “We got a couple interceptions. We got a couple fumble recoveries, and that’s where we’ve struggled in some other games is getting those turnovers … and then not capitalize on it. We were definitely able to capitalize (Friday).”

Albany recovered an onside kick, setting up a 19-yard touchdown pass from Doherty to Michael McCahill, helping the Hornets go up 28-14.

Albany forced a punt, and Doherty busted a 50-yard TD run on the next play. Caleb Barksdale’s PAT made the score 35-14.

Another Loranger punt led to a 6-yard TD run from Doherty with the PAT from Barksdale pushing the lead to 42-14.

Wolfe got an interception on the next play after the kickoff, and the teams went to halftime.

Wolfe had a 39-yard touchdown run to cap the Hornets’ first drive of the second half, extending the advantage to 48-14.

“We had some blown assignments defensively that allowed for a couple of those touchdown runs, but their running back’s a good football player,” Janis said. “Offensively, we had some guys make some really good catches. J.J. stayed in the pocket and made some good throws down the field. I thought we played as well as we have all season and probably our most complete game.

“It was great to see the energy up after a loss last week,” Janis said. “The kids responded, definitely played well. It was nice to have that balance offensively too to be able to run the football. Coach (Carmon) Moore did a great job this week coming up with that game plan and just making a commitment to running the football, and the kids did a really good job carrying it out.”

Loranger turned the ball over on downs at the end of the third quarter, and Jamarcus Williams capped a long drive with a 2-yard TD run from Jamarcus Williams. Michael McCahill’s run on the two-point conversion capped the scoring.

“Everybody contributed,” Janis said. “What’s not in the scoring there is we had a few sacks, got some pressure on the quarterback defensively. The secondary played really well.”