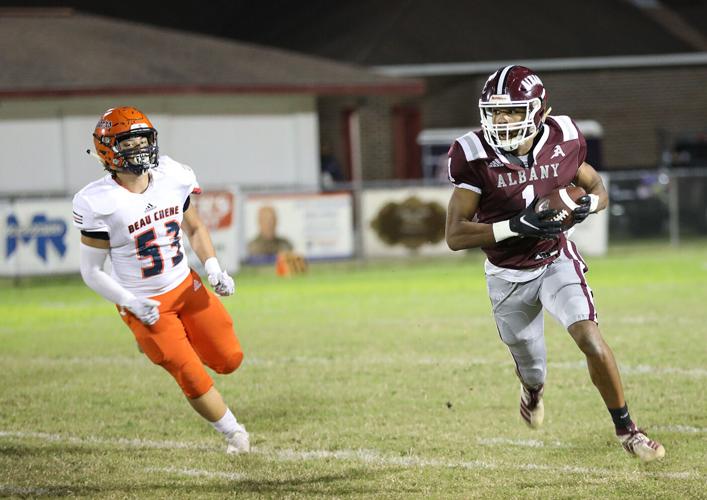 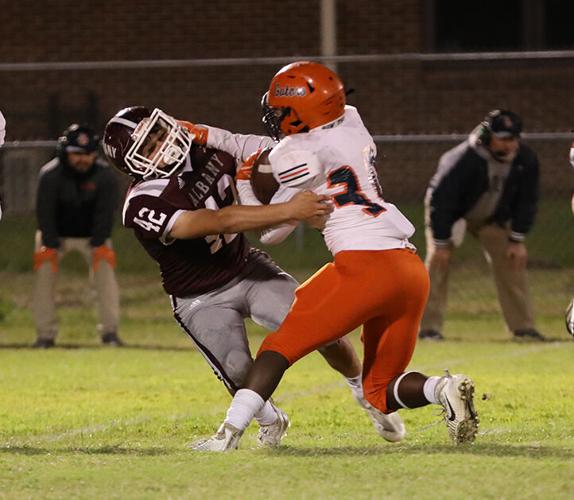 Beau Chene put together a 28-point third quarter to erase Albany’s halftime lead, keying a 44-30 win over the Hornets on Friday.

“The effort is there,” Knight said after the Hornets fell to 1-7. “Our kids have done what we’ve asked them to do. When I came in, the one thing I told them (was) I wanted to be more physical, and I wanted to play harder on defense, and I just wanted them to give a good effort. At this point, it’s very easy. There’s a lot of teams that are just laying down right now, and there’s a lot of teams in the same boat we’re in, but our guys come every day. They practice just like they did in August or September when everything was fresh.

“…Most of them are just 100 percent in, so that gives you hope for the future,” Knight said. “That tells you they’re buying in to what you’re trying to do. The scoreboard doesn’t show it. All fans see is winning and losing, but I’m with them every day. I see the work they put in in the weight room. I see the work they put in on the field. They’re still learning stuff we’re putting in. I’m excited for the future with these guys because they’ve gotten so much experience this year. You can’t teach them that.”

Beau Chene got the game’s first touchdown, which held until the Hornets got a touchdown from J.J. Doherty.

From there, the Albany’s Jon Duhe got a pick-six, and a Beau Chene fumble led to a touchdown to pad the lead.

A Beau Chene fumble led to another Albany touchdown, making the score 22-6.

“Our kids are very emotional football players,” Knight said. “If things are going good, they play at another level, and that’s kind of how we got the lead. They (Beau Chene) had took the lead, and we kept trying to get the kids pumped up, back in the game, and J.J. broke a big, long run. That got everybody pumped up. Then Duhe picks the very next pass off. He scores, and then we were rolling,”

Beau Chene kicked a field goal to cut the lead to 22-9, and Albany drove to the Beau Chene 10 just before halftime but was unable to score.

“We were trying some different stuff,” Knight said. “Our fullback is hurt. (Antonio Lopinto) is out for the rest of the season. If he’s in, we probably go with our heavy package and try to ram the ball. We still had two or three minutes, but we missing one of the guys that normally lines up in the backfield for that set, and then of course we were missing (Lopinto) as a fullback. At that point, some of our bigger guys are just hurt, so we went to more of spread type look for this week. We got down there to where the field kind of narrows up on you and just ran out of room to run that offense.”

The third quarter was all Gators, who scored 28 points to pull ahead 37-22.

“The kids had a good attitude at halftime,” Knight said. “We made some adjustments we thought we needed to make.”

“It was actually like a third and long, and we blitzed a linebacker, and he met the guy head up in the backfield, I mean, almost took the handoff,” Knight said of one of the Gators’ touchdowns. “But the difference in a little bitty sophomore and a really big senior is a couple years of maturity. He just ran over our linebacker and threw him down. Once he broke it, it was just open, and he outran us to the end zone. We had two or three guys right there with him. He just outran us to the end zone. After that, it was kind of like we opened the floodgates. It just kind of rolled for them.”

“We kind of regrouped late,” Knight said. “Once we regrouped, we scored, and then we held them a couple series.”

Knight said the Hornets had the ball on fourth-and-1 near midfield late in the game but were unable to convert on the play.

“We had run a little speed play to J.J.,” Knight said. “They sent a guy off the edge. We missed a block, and we still thought we had the yard. That was a big play for us that night. We thought we had that first down. When the guy missed the block, he had to turn it quicker than he wanted to. He was trying to fight for extra yardage, and there were too many of them there to get the yard. That’s kind of how it ended.”

Jamarcus Williams and Seth Hoffman had touchdowns for the Hornets.