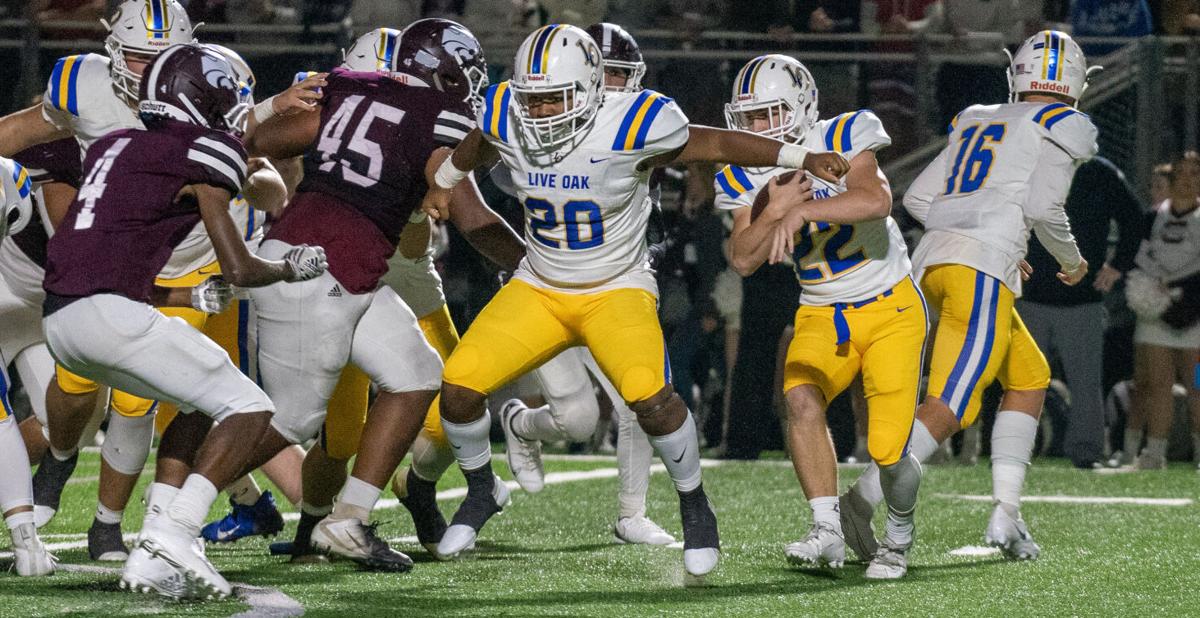 Live Oak's Lane Hilbun (22) gets the handoff as teammate Daylen Lee (20) prepares to throw a block in Friday's game at Central. 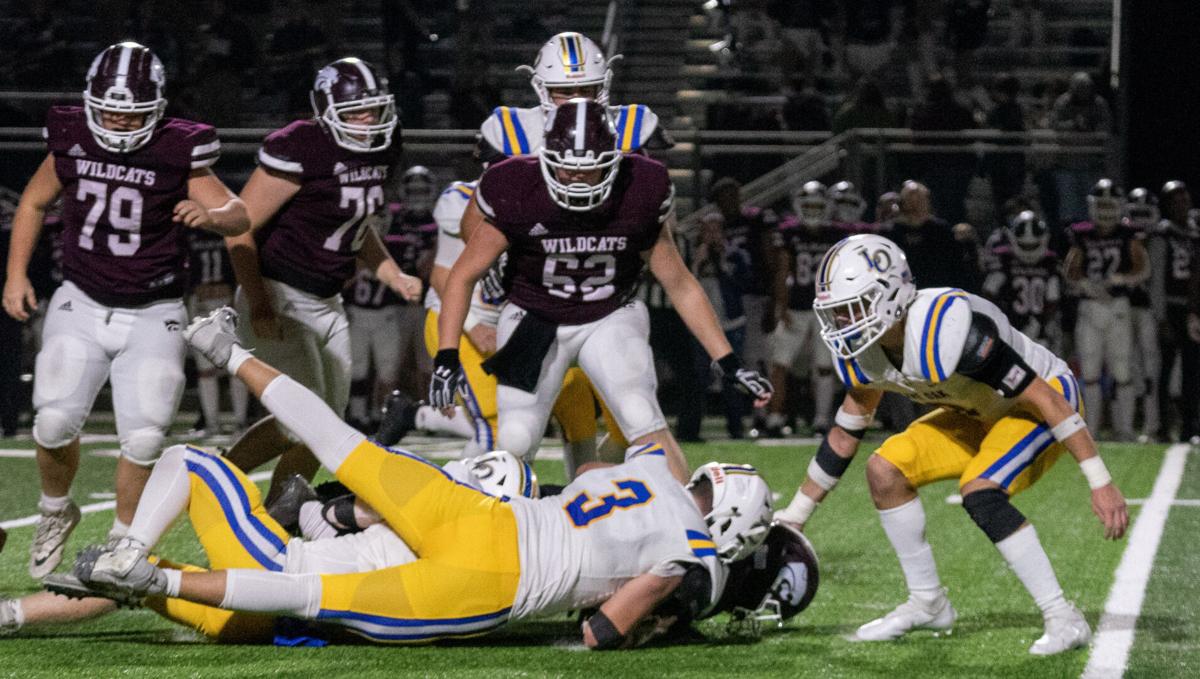 CENTRAL -- In its regular season finale, Live Oak ran into a brick wall … over and over again.

The Eagle couldn’t get anything going against District 4-5A foe Central and had one of their worst showings of the season, falling in deflating fashion on the road, 35-3, Friday night.

The Eagles (5-3, 2-2) were coming off a thrilling 34-20 win over Pineville, a team Live Oak picked up last week after Scotlandville went into quarantine with COVID-19 contact issues. That marked the third straight win for Live Oak and fifth in six games.

Facing a physical Wildcats squad (7-1, 3-1) that was fresh off a 46-7 win over Belaire, the Eagles finished with 40 yards of total offense, which included negative-15 yards on the ground. Live Oak didn’t get a first down until the third quarter and was scoreless until Landon Ratcliff’s 32-yard field goal with 5:01 remaining in the game.

Meanwhile, Central finished with 314 total yards of offense — with 213 of that coming through the air — and 12 first downs, scoring in every quarter of action.

After the game, coach Blane Westmoreland was blunt about his team’s performance.

“[Central was] the better team,” he said. “We didn’t match physicality even though we knew they were a very physical bunch. They always play like their backs are against the wall, and we weren’t able to match it.

“We weren’t able to convert on their turnovers, and we had some uncharacteristic turnovers tonight. We have to correct those and get ready for next week for the playoffs.”

The Eagles shot themselves in the foot from the beginning, with quarterback Brock Magee throwing a pick on the second play from scrimmage that Central’s Russell Chin returned to the Live Oak 3-yard line.

On the next play, Pierce Patterson plunged ahead for an early score to put the Wildcats up 7-0.

After the Eagles went three-and-out, Central took over and was marching down the field when quarterback Jonathan Swift fumbled the ball, leading to a Live Oak recovery. But with the ball at the Central 34-yard line, the Eagles stalled on offense, turning the ball over after four quick plays.

Swift gave the ball right back to Live Oak, throwing a pick to Aiden Saunders on the next series. But the Eagles’ offensive struggles continued as they again turned the ball over on downs after just four plays.

The Wildcats doubled their lead on their first drive of the second quarter, with Swift hitting receiver Calvin Collier in stride for a 75-yard score.

Meanwhile, the Eagles punted on their next two possessions to go into the halftime break down 14-0.

Live Oak forced a punt on Central’s first drive of the second half, but Magee quickly gave the ball back to the home team with his second of three interceptions on the night. With the ball deep in Live Oak territory, the Wildcats needed only two plays to score, with Patterson bursting ahead for a 14-yard touchdown to give his team a 21-0 lead with 7:19 in the third quarter.

Cameron Brown made it a 28-0 game when he plunged in from 2 yards out on Central’s next drive, which came after another Eagles three-and-out.

After three quarters of running into a stiff Central defense, Live Oak found life when Magee hit Cade Getwood down the right sideline for a 44-yard gain. But the joy from the Eagles’ best play of the night was short-lived — Magee threw a pick to Central’s Caleb Ward on the next play to end another Live Oak drive.

Central marched down the field on an eight-play drive that ended with Swift tossing his second touchdown of the night, this one an 8-yard connection with Malik Hillard in the left corner of the end zone.

The Eagles got on the board with Ratcliff’s field goal two possessions later, thanks in large part to a muffed punt that gave Live Oak the ball at the Central 15-yard line.

Friday night’s loss will likely cost the squad a home game when the playoffs start next week. Playoff pairings will be announced Sunday.

But no matter where or whom they play, Westmoreland said his team has its work cut out this week in practice if it hopes to make it past the first round.

“Like I said, we have to do a better job of matching teams’ physicality and we were unable to do that tonight, and that’s why that happens. If we don’t do a better job, games like this are gonna happen a lot.”