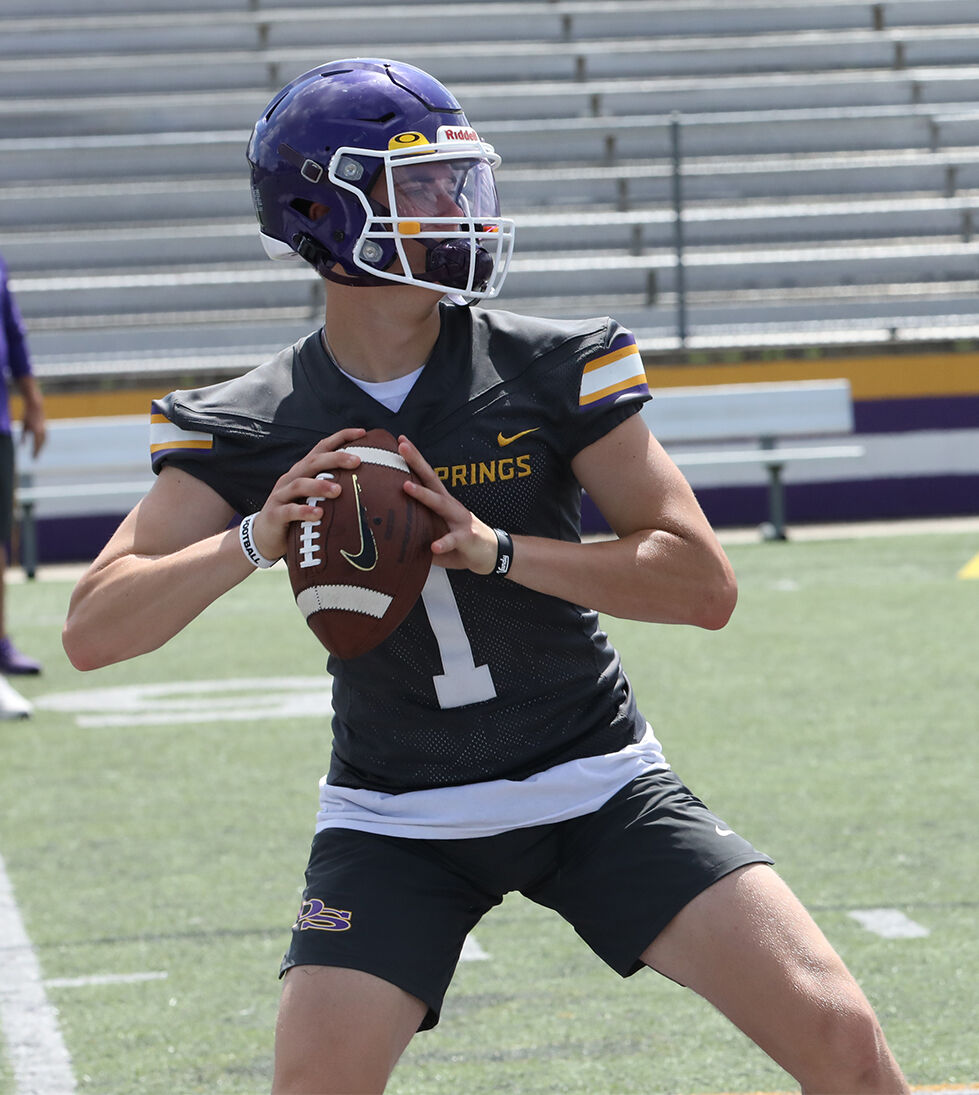 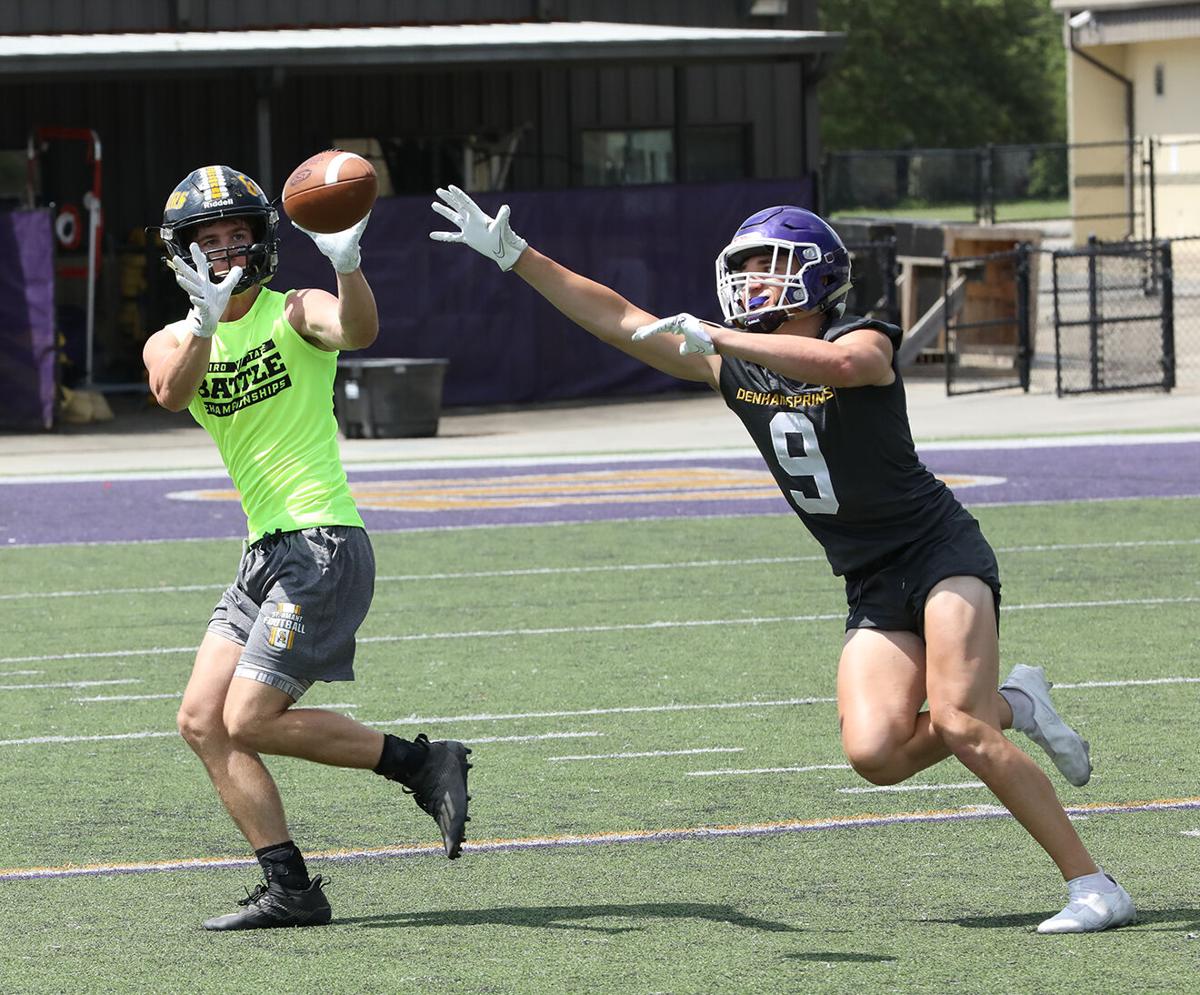 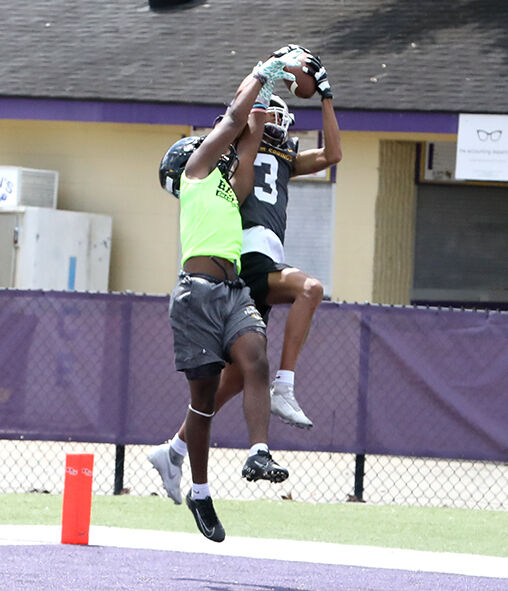 DENHAM SPRINGS -- Wednesday marked the start of a new set 7-on-7 league play, and it was new territory for some of the younger players on the Denham Springs High football team.

Beard said he had to explain how league play works to those who were freshmen and sophomores last season.

When the action started, Beard said he couldn’t complain about the effort from his team, which got a ‘win’ over Livonia in the second of three 20-minute sessions at Yellow Jacket Stadium.

“It’s just about competition. There’s no doubt we get some work coverage-wise. We get to run our offense. It’s got some benefits to it, but the one thing that I truly only like about 7-on-7 is the competition aspect,” Beard said with a grin.

St. Amant got the scoring started with a 20-yard TD pass against the Yellow Jackets before the ensuing DSHS drive ended with two straight incomplete passes to the end zone.

Denham came up with a stop on defense before Reese Mooney found Ray McKneely on a 45-yard TD pass on the first play of the ensuing DSHS drive to knot the score.

“I thought we looked good at the end of the day,” Mooney said. “I know we lost a couple of games, but we’re going to bounce back. It’s just 7-on-7. We’re just running our offense and they try to game plan just to stop us, and they just run the 7-on-7 defenses, so I’m not really worried about it. We’ll pick it up.”

“It’s good to see some new competition and just getting out there and competing against all those guys,” Mooney continued. “I thought it was pretty awesome. I’m looking forward to these next three weeks.”

St. Amant answered with a 24-yard scoring pass before Denham’s Joseph Christman hit Micah Harrison on a 40-yard pass to set up a TD pass to Camron Eirick, who made a nice grab over a defender in the end zone for a score to tie the session again.

The Gators connected on a 36-yard pass to set up a 4-yard TD to close out the scoring in the first session.

Against Livonia, Mooney hit Rylan Hiatt on a 22-yard score on the second play of the Yellow Jackets’ first drive.

Neither team scored again until Christman hit Nathaniel Williams on a 40-yard TD.

Beard said he was pleased with the way DSHS quarterbacks spread the ball around during Wednesday’s session.

“We’ve got a lot of guys coming back,” Beard said. “You start looking at guys that ran a route last year in a varsity game or caught a ball in a varsity game, and you can see that number’s pretty big. We got some youth that got some experience last year, and we feel comfortable with anybody. We feel really solid with our running backs, but we also feel really solid with our H-back/tight end, our slot receiver, and we feel really solid with our two guys on the outside. The biggest thing with them is they have to understand that this is a team football game, and as routes are run and progression is read and the rush is up front, they’ve got to understand that not everybody can touch the ball every play, so do your job, and you’ll be rewarded.”

Denham’s Lionell Dawson got an interception to stop the ensuing Livonia possession, and the teams swapped possessions until Mooney hit Eirick on a 34-yard score.

Livonia got its lone score on its last possession as a 33-yard pass set up a 12-yard touchdown.

“I thought we started a little slow, but then I thought we did some really good things,” Beard said. “We hit some really big plays. We got some stops when need be. We dropped a couple of balls, but that’s part of it. That’s going to happen. The biggest thing was I thought we did a good job of bouncing back the next play or the next series. It looked like we did a really good job of just letting that one go and moving on. That’s good to see as you grow this program and you go through your ups and downs and your growing pains. That’s part of it.”

Central scored on a 2-yard pass on its opening possession against Denham Springs and got a second score on a 25-yard pass after stopping the Yellow Jackets on downs.

The teams traded possessions until Mooney hit Hiatt on a 24-yard score.

Central followed with a six-play drive, which was capped by a 1-yard TD pass.

Denham’s ensuing drive, which was the last of the day, ended at the CHS 30 when Christman threw incomplete to the end zone.

“We’re just trying to do what we do,” Beard said noting timing is a bit different in 7-on-7, which is played without linemen. “We’re trying to work the outside game. We’re trying to work things that are going to be more realistic to who we are. Sometimes it doesn’t always look good 7-on-7 because we’re a three-man front (on defense), so sometimes we’re dropping eight. Really, no matter what we’re dropping seven, so some people know how those weaknesses are with the guy that’s on his knee. Some of it’s realistic, some of it isn’t, but it’s still competition, and you’ve got to get it done.”