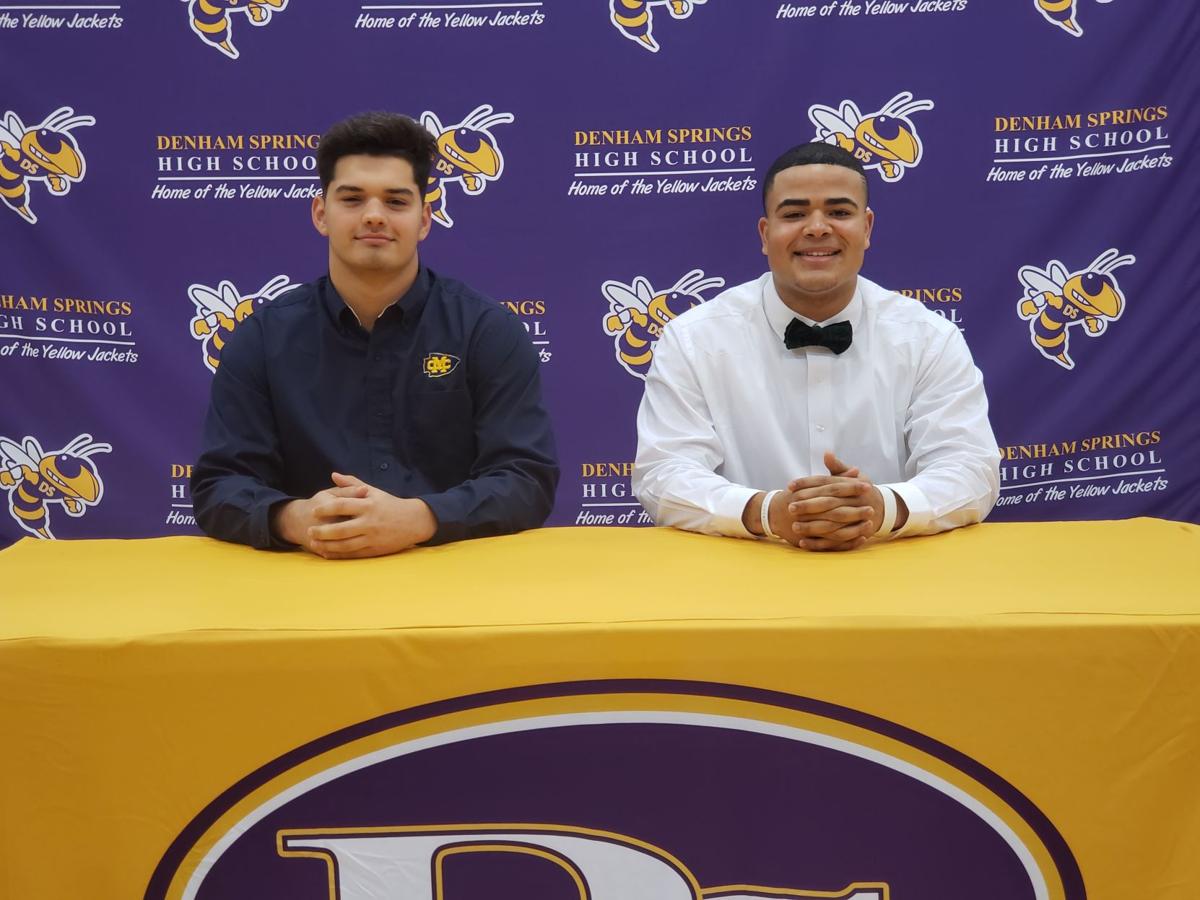 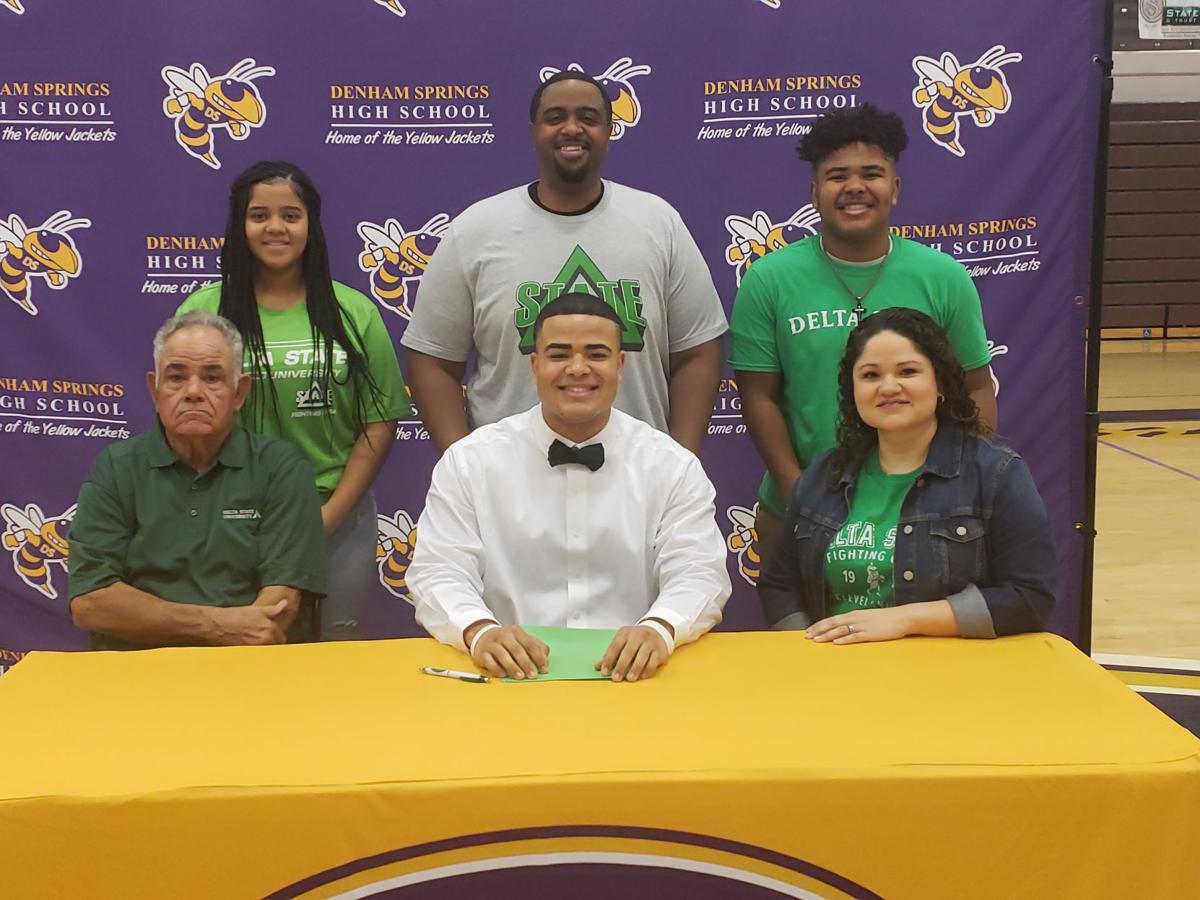 Denham Springs High's Kaydon Berard is joined by his family for his signing day ceremony Wednesday where the senior defensive end/outside linebacker is headed to Delta State University. 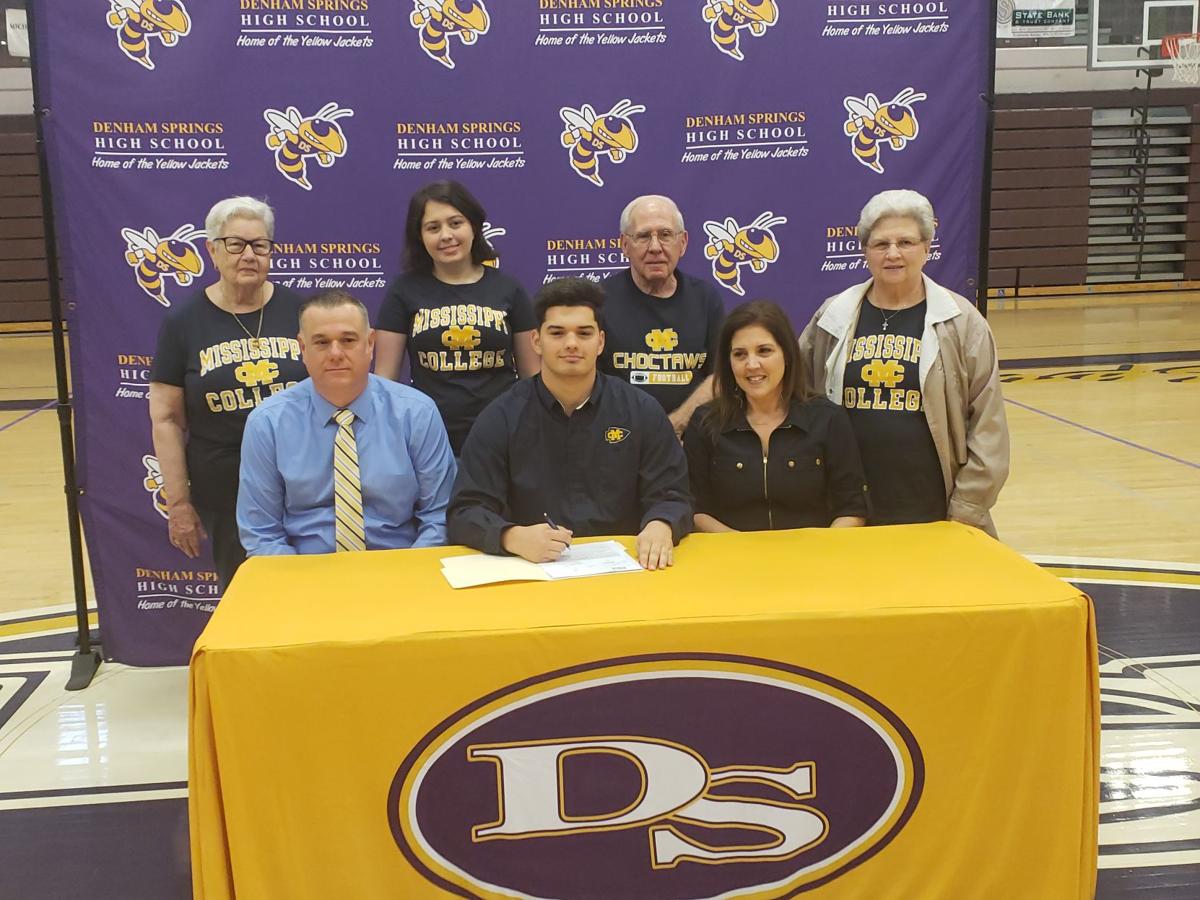 Denham Springs High linebacker Tristan Duhe is joined by his family during his signing ceremony Wednesday where the senior is headed to Mississippi College.

Denham Springs High's Kaydon Berard is joined by his family for his signing day ceremony Wednesday where the senior defensive end/outside linebacker is headed to Delta State University.

Denham Springs High linebacker Tristan Duhe is joined by his family during his signing ceremony Wednesday where the senior is headed to Mississippi College.

DENHAM SPRINGS – After being teammates and close friends over the course of their high school career Denham Springs High’s Tristan Duhe and Kaydon Berard threw themselves right in the middle of one of Mississippi’s best Division II football rivalries.

The two members of the Yellow Jackets defense shared the stage Wednesday morning in the Grady Hornsby Gymnasium during a ceremony, solidifying their futures and a built-in once-a-year reunion when the teams Duhe and Berard will represent meet on the football field.

“He’s been one of my best friends through high school,” Duhe said of Berard. “It’s going to be weird playing against him. We’ve always played on the same team. It’s going to be interesting.”

“It’s going to be so weird being on a different side of the ball,” Berard said. “I think it’s going to make us that much closer when we see each other and be able to meet up and create a lasting bond.”

One aspect of joining Delta State’s program that immediately clicked with Berard was the overall sense of family.

“When I told them I wanted to commit the coach (Cooley) gave me a real big hug and my mom started tearing up,” said Berard, also throws the shot put and discus for the DSHS track team. “He was like he was going to take care of me. That’s when I knew it was a family and I liked that.”

Berard, who began his career at Denham Springs at fullback, moved to defense as a sophomore where he’s been a hybrid player, capable of playing both outside linebacker and defensive end where the 5-foot-11, 215-pounder was able to display his pass-rushing skills.

That’s the exact skill set Delta State looks forward to watching from Berard, who was selected first team All-Parish and second team All-District 4-5A as a senior. He registered 48 tackles, including 21 behind the line of scrimmage in nine games.

“If I put in the work and do really good things in practice, they said I would get a chance to play,” said Berard, who hopes to play between 230-235 pounds. “If I’m the best out there, they will start me.”

Duhe, like Berard, was a four-year starter over the course of his high school career and also a two-sport athlete, serving as the Yellow Jackets catcher in baseball.

He moved from safety into the tackle box and enjoyed a standout final year at middle linebacker, leading DSHS in tackles with 113 total stops, a figure that included 29 tackles for loss with seven quarterback sacks.

The 5-foot-11, 215-pound Duhe, a first-team All-Parish and All-District 4-5A selection, says he plans to remain at middle linebacker at Mississippi College.

“It’s one of the biggest days of my life, it signifies a whole new chapter,” Duhe said. “My whole life’s about to do a 180. I was extremely excited this morning. It definitely reached my expectations. It was fun to have everyone come out and support us.”

Both Duhe and Berard embraced the opportunity to maintain a recent tradition of having Denham Springs players sign football scholarships, an achievement offensive tackle Alex Harris realized more than two months ago by signing with Brown University.

“We try to be a role model for all of the younger guys, show them if you come here, you can find somewhere to play,” Duhe said. “This isn’t a small school that nobody thinks about. We always have coaches come to practice and games. If you want to play college football you definitely have a chance.”

Berard took it a step farther, inviting freshman football player Alex Chandler to the ceremony in hopes that he and Duhe could serve as inspirations to follow in their footsteps where Chandler could find himself in a similar situation in three years.

“I didn’t get to see who signed when I was a freshman, I wanted him to see it and have that same passion I had, something to strive for and be the greatest,” Berard said. “I want to keep this legacy going. I want people to know that if you come here, put in the work you will get rewarded and you will get what you want at the end of the day.”