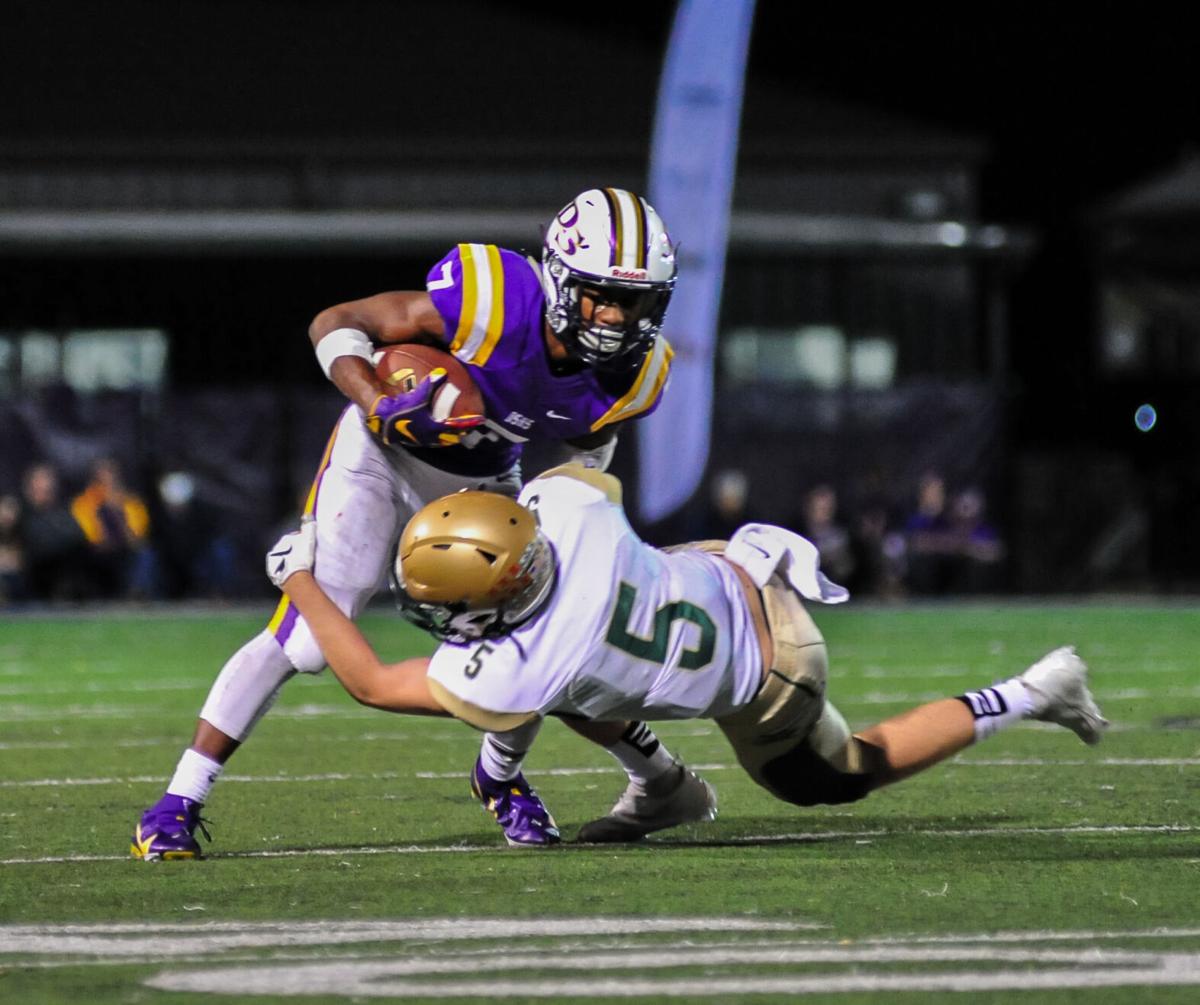 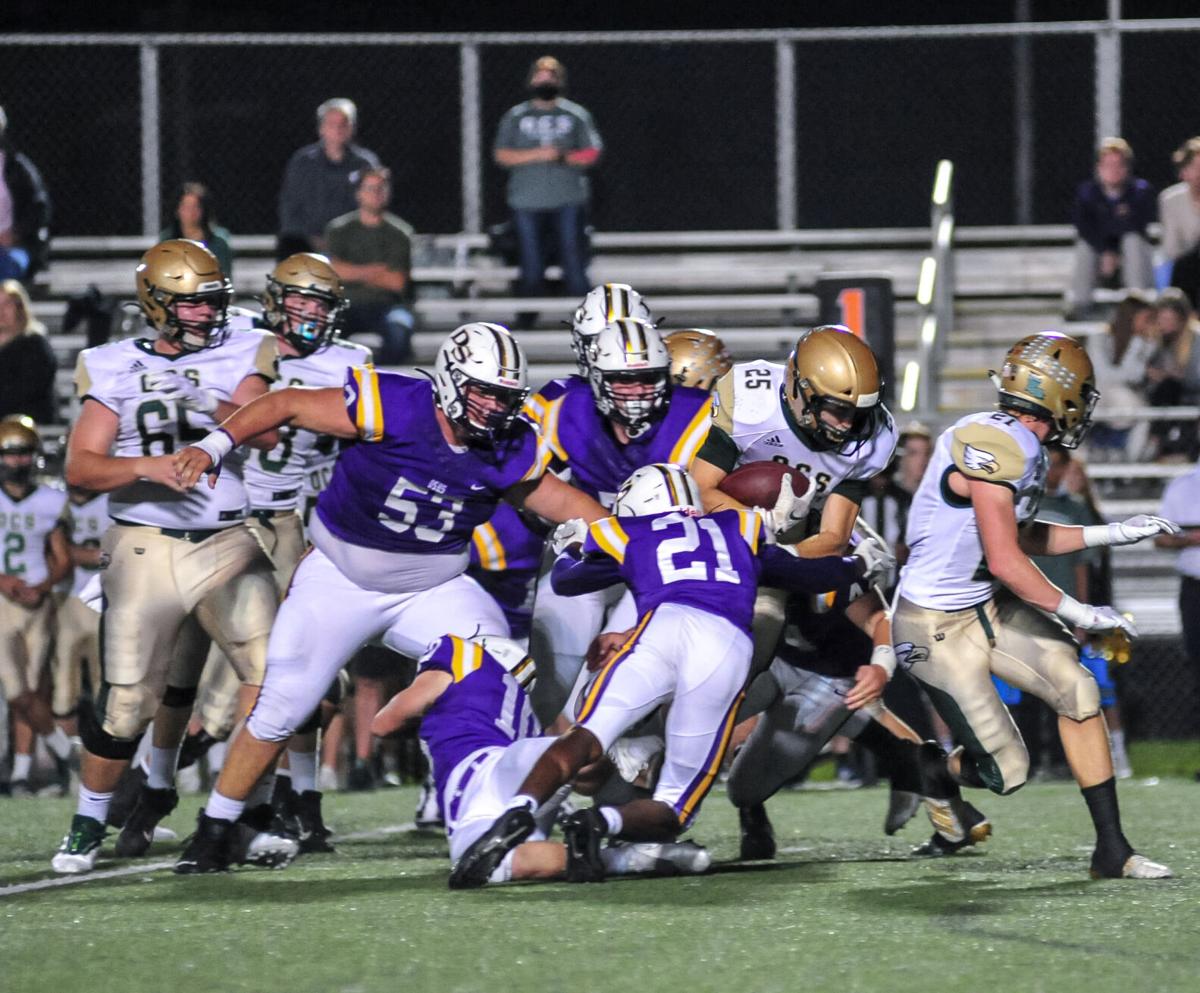 DENHAM SPRINGS – The Denham Springs football team didn’t win its game with Ouachita Christian, but the contest did give Yellow Jackets coach Brett Beard a glimpse of where he’d like his program to be in the near future.

The Class 1A No. 3 Eagles rushed for 358 yards, with quarterback Hunter Herring turning in a 222-yard, five-touchdown effort in a 47-21 win over Denham Springs at Yellow Jacket Stadium on Friday.

“It doesn’t matter what (classification) they are, they have a standard and an expectation that puts them in that top tier to where they’re going to be in the Dome year-in and year-out or have a chance to be in the Dome year-in and year-out because they do things right,” Beard said. “They fight for 48 minutes. They play the game the right way. Those guys … they don’t know what a Thanksgiving break. I feel like on our end, we might have been ready for a Thanksgiving break. We might have been through a lot this year, and it was time for a break. The standard is, we should be practicing every Thanksgiving. That’s where we’ve got to get. That’s the expectation.”

“The standard and the expectation at Denham Springs is not being in that bottom 33 (in the power ratings) and below,” Beard continued. “That’s what we have to break through here, and that’s going to take every one of us. That’s what’s exciting about this challenge. I love it here. I want to be here. We as a group, as a coaching staff, as a program, as a team, as a bunch of kids, we want to be the ones that change this program back to what it once was recognized as …”

The theme of the night for Ouachita Christian was big scoring plays as the Eagles got on the board on Dillon Dougan’s 54-yard TD run after the Yellow Jackets missed a 25-yard field goal attempt on their first drive of the game.

Dugan finished with 131 yards on 16 carries.

OCS forced a punt and capped its next drive on Herring’s 41-yard touchdown run, pushing the lead to 14-0 with 2:10 to play in the first quarter.

“We kind of looked like we did early on,” Beard said. “I think we got punched in the mouth a little bit, and they did a great job of executing and did a great job coaching. We were out-coached (Friday), and we were out-played (Friday) and hats off to those guys.”

The Yellow Jackets (1-7) responded with a five-play, 65-yard scoring drive with Reese Mooney hitting Micah Harrison on three straight passes totaling 22 yards. Omari Warren busted a 12-yard, setting up Mooney’s 31-yard TD pass to Preston Holwager, who was alone in the end zone, to cut the lead to 14-7.

“It’s a stalk-and-go, so you basically fake that block and usually there’s nobody around,” said Holwager, who had two catches for 80 yards and two touchdowns. “It’s all in just slow down, wait for the ball to hit you. Just make sure you stay in bounds, get the catch, because that’s the one thing you worry about when you see the ball in the air (and it) just slipping through.”

From there, OCS went on a 14-play drive that came up empty when Herring threw incomplete in the back of the end zone on fourth down.

The Yellow Jackets took over at their own 6, and two plays after a pass interference call against OCS, Noah Lovelady returned a Mooney interception 20 yards for a touchdown, pushing the lead to 21-7, a score that held at halftime.

“It’s going to happen,” Beard said of the turnover. “That’s part of the game. There’s going to be mis-reads. There’s gong to be missed opportunities. You’re going to make a bad decision here and there, and you just hope it doesn’t turn into that. That’s part of the game. That’s normal, and how you handle that is the expectation and the standard we’ve got to get to, and I thought (Mooney) did a great job of bouncing back and fighting back.”

Mooney finished 21-for-34 for 248 yards, three touchdowns and one interception, with Harrison hauling in 11 catches for 91 yards.

The big-play trend continued in the second half as Herring busted a 55-yard run on the fourth play of the third quarter, setting up his 2-yard TD run two plays later to make the score 27-7.

“He fits that system perfectly,” Beard said of Herring, who went 9-for-16 for 108 yards passing. “He did a heck of a job running his offense, getting the reads. Power flow and things like that, if you read them right and the opportunity’s there and we don’t set an edge or we overrun pulls and things like that, there’s going to be cutbacks. The kid does a phenomenal job. I was impressed with him on film. I was more impressed with him in person. I’m blown away by the kid, and I look for him to do some big-time things.”

The Yellow Jackets answered with an eight-play scoring drive that culminated in a 49-yard touchdown pass from Mooney to Holwager in which Holwager and the defender became briefly entangled before Holwager emerged with the ball and broke free down the right sideline for the score, cutting the lead to 27-14.

“He was kind of pushing up against me, and the ball hit the backside of his pads, and I reached around and pushed the ball against his pads and pulled it away,” Holwager said of the catch. “I was in shock myself.”

An on-side kick was recovered by the Eagles, who took over at their own 46. Three plays later, Herring scored on a 25-yard run for a 34-14 lead.

Following another DSHS punt and a personal foul against the Yellow Jackets, OCS started its next drive at its own 45. The Eagles converted on fourth-and-7 and their own 48 with a 7-yard pass from Landon Graves to Thomas Culp, and four plays later, Herring scored on a 27-yard run for a 47-14 lead.

Denham Springs scored the game’s final points on the ensuing drive, with Mooney going 4-for-5 for 63 yards, capping the five-play drive with an 18-yard TD pass to Micah Harrison with 4:07 to play.

“I thought our kids battled,” Beard said. “For 48 minutes, they played, and that’s one of the things we had to learn to do here this year. That was one those walls and barriers we had to break through, and I thought our kids did that, and I couldn’t be more proud of them for that.”

A senior, Holwager played his final game with the Yellow Jackets, but he’s hoping he and his teammates have laid a foundation for the future.

“It’s kind of sad that it’s over and everything, but I think we’ll all move on,” Holwager said. “We learned a lot from Coach Beard and what he brought to the program. Most of us probably haven’t had a coach like him that actually pushed us to do more than what we needed. I know most people are down, but in the long run, we’ll probably get somewhere where we need to be because he taught us a lot.”