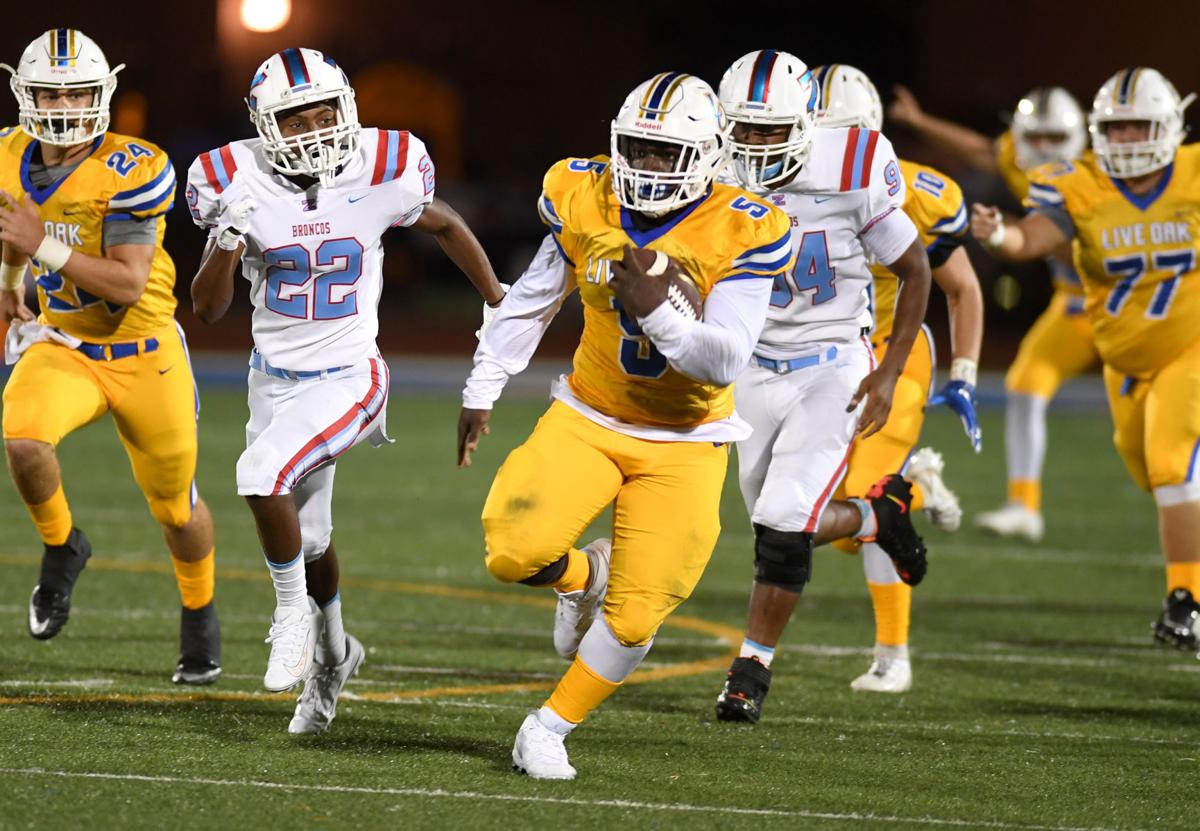 Live Oak running back Kee Hawkins (5) breaks through the line for good yardage in the first half. 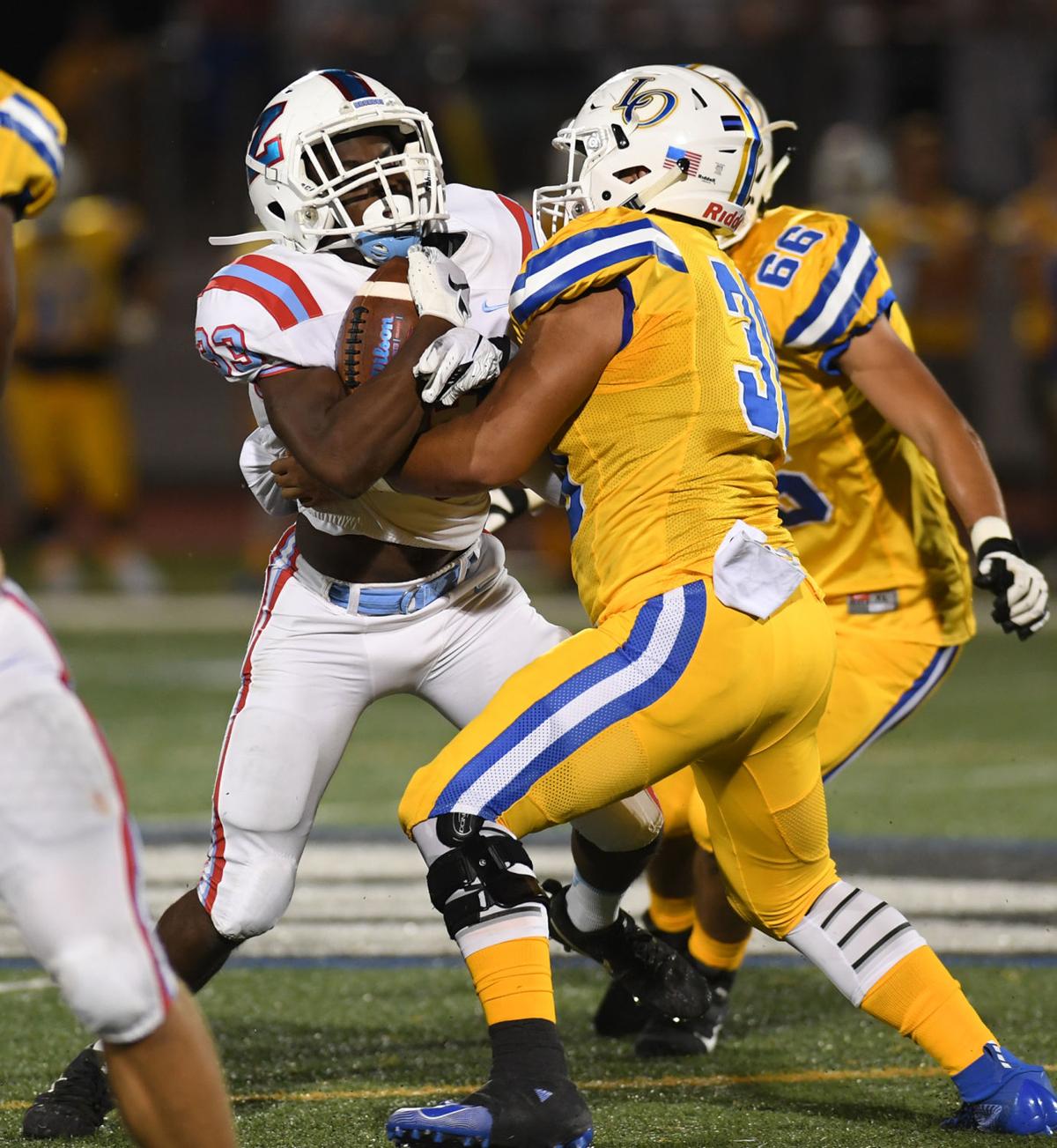 Zachary running back Rodrick Duhe (33) is stopped by Like Oak linebacker Gabe Kimble (30) earlier this season. 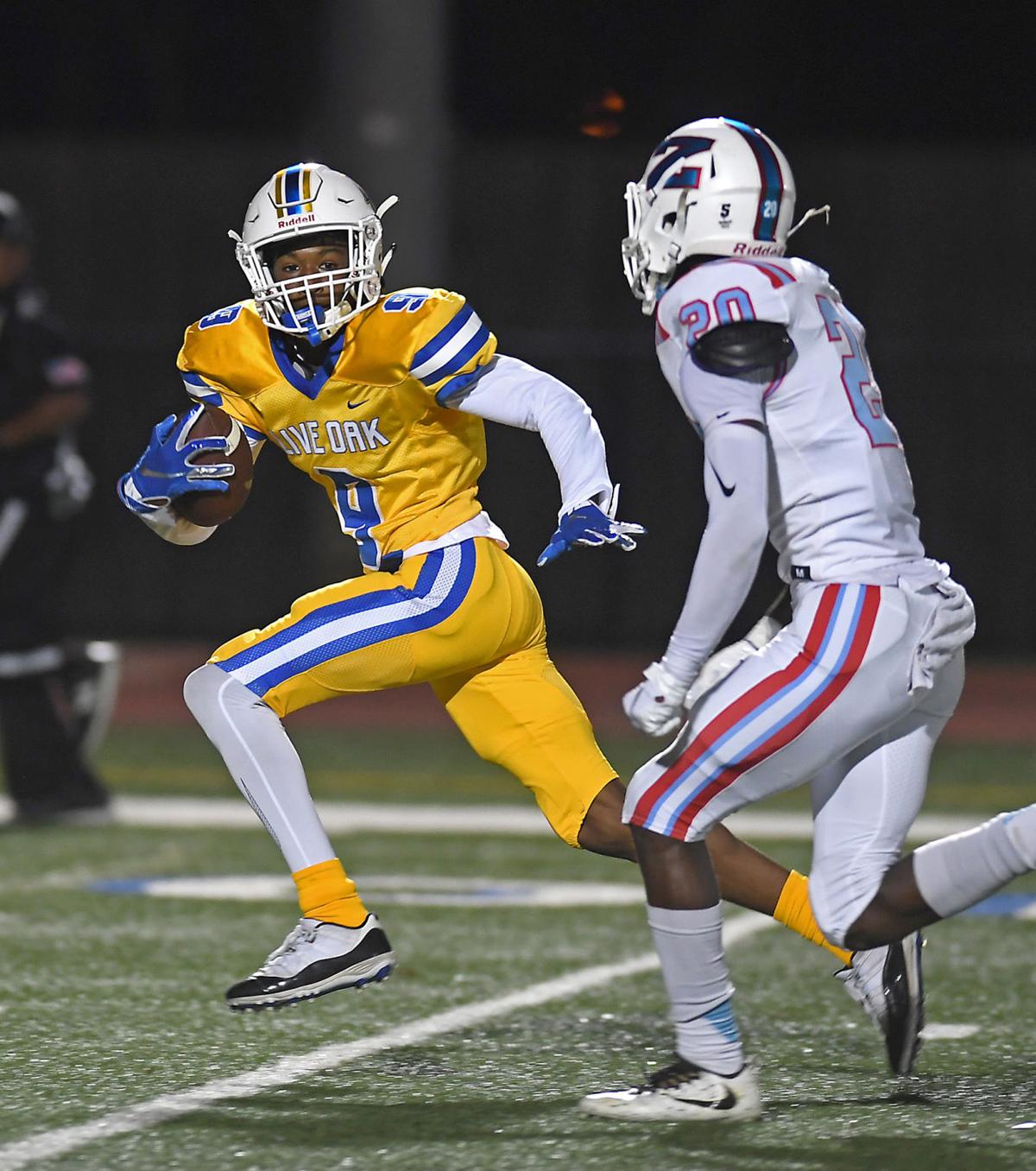 Lie Oak WR CJ Davis (9) shows his ability to run after the catch, pulling away from Zachary's DeJarian Jones (20).

WATSON – With just over four minutes to play and trailing the two-time reigning state champions by five points, Live Oak got the ball back amid a frenzied home crowd.

The Eagles defense had just created the final opportunity when LSU commitment Jalen Lee and Dammian Capling threw Zachary’s all-state quarterback Keilon Brown for a two-yard loss on a fourth down carry.

Live Oak picked up two first downs, inching close to midfield, when Zachary’s defense responded with a pair of sacks and wound up recovering a fumble on a hook-and-lateral with 1:37 remaining to secure a 21-16 victory Friday at Eagle Stadium in the District 4-5A opener for both teams.

“It’s an exciting game,” Live Oak coach Brett Beard said of the contest that was delayed 70 minutes by lightning. “Great game against the two-time defending champion coming in our house. All you could ask was for these dudes to fight and give us everything they can give us. They gave us opportunities; we’ve got to finish drives. It’s a tough one to swallow. Go back and get it cleaned up and get ready for the next one.”

Live Oak (5-1) trailed Zachary 21-6 at halftime but shut out the high-powered Broncos in the second half.

The Eagles' defense limited the Broncos (3-2) to 63 total yards on 27 plays, including holding Brown to 5 of 13 passing for 30 yards after the Memphis commitment threw for three touchdowns in the opening half, staking his team to a 15-point lead.

“We went in at half upset with ourselves,” Live Oak cornerback Darian Ricard said. “We weren’t playing good as a secondary. We got together as a group and said we’re not going to be the reason if we lost this game.”

The third fumble recovery for Live Oak’s defense, this one courtesy of Aidan Saunders, led to Kee Hawkins’ second short touchdown run of the game.

When the Army commitment, who wound up with 111 yards on 24 carries, scored from five yards out the Eagles trailed 21-13 with 1:17 left in the third quarter.

The Eagles reached the 9-yard line, but on second-and-eight, quarterback Rhett Rosevear was sacked for a three-yard loss and followed with an incompletion in the end zone.

That resulted in a 30-yard field goal from Cole Crenshaw with 6:25 showing that accounted for the final score.

For Crenshaw, it was a bit of redemption, after having two earlier field goal attempts of 49 and 40 yards bounce off the right and left uprights, respectively.

“Hat’s off to these kids and coaches for battling,” Beard said. “What a great game. We have to learn from this. It’s going to sting and bother us. We’ve got to have some confidence coming off this one and realize what can be done at Live Oak.”

Zachary coach David Brewerton had a different view of his team’s overall performance.

Zachary didn’t show any ill effects after losing a pair of first-quarter fumbles and trailing 6-0.

Brown completed 8 of 14 passes for 173 yards with touchdowns of 38 yards to Hilton, 29 to Jayden Williams and 17 to Charles Robertson for a 21-6 halftime lead.

Hilton topped the Broncos with five catches for 68 yards, all in the first half, while Williams had four grabs for 44 yards.

Linebacker Bret McCoy recovered one of his team’s two fumbles in the first half, helping to led to Live Oak’s lone score and early 6-0 lead with 3:30 left in the opening quarter.

The Eagles needed four plays to cash in on McCoy’s recovery with a key 45-yard completion from Rosevear to Davis to the 1-yard line where Hawkins plowed in over the goal line on first down.

“That’s the defending state champions the past two years,” Ricard said. “Losing by five points, we’re not happy. We’re right where we want to be, and we’ve got to go back and get to work.”