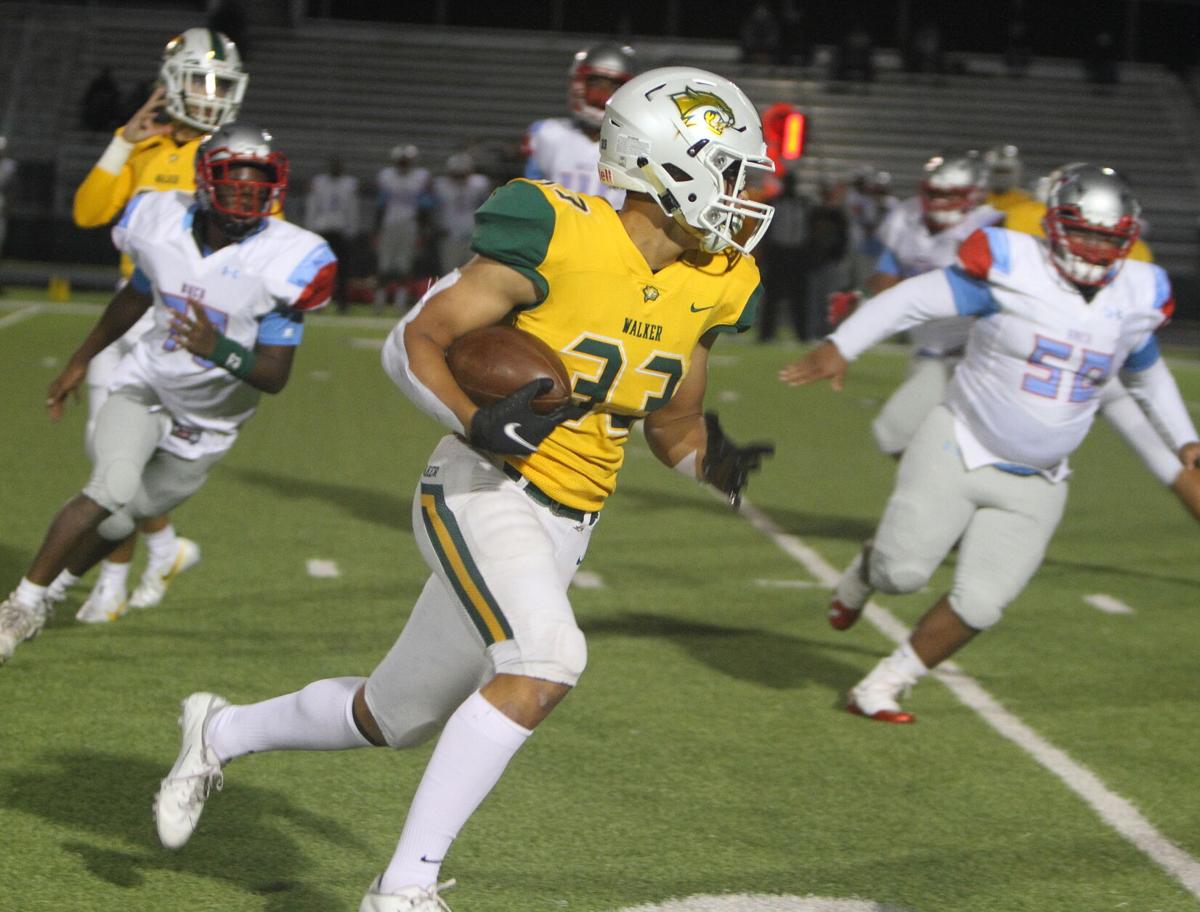 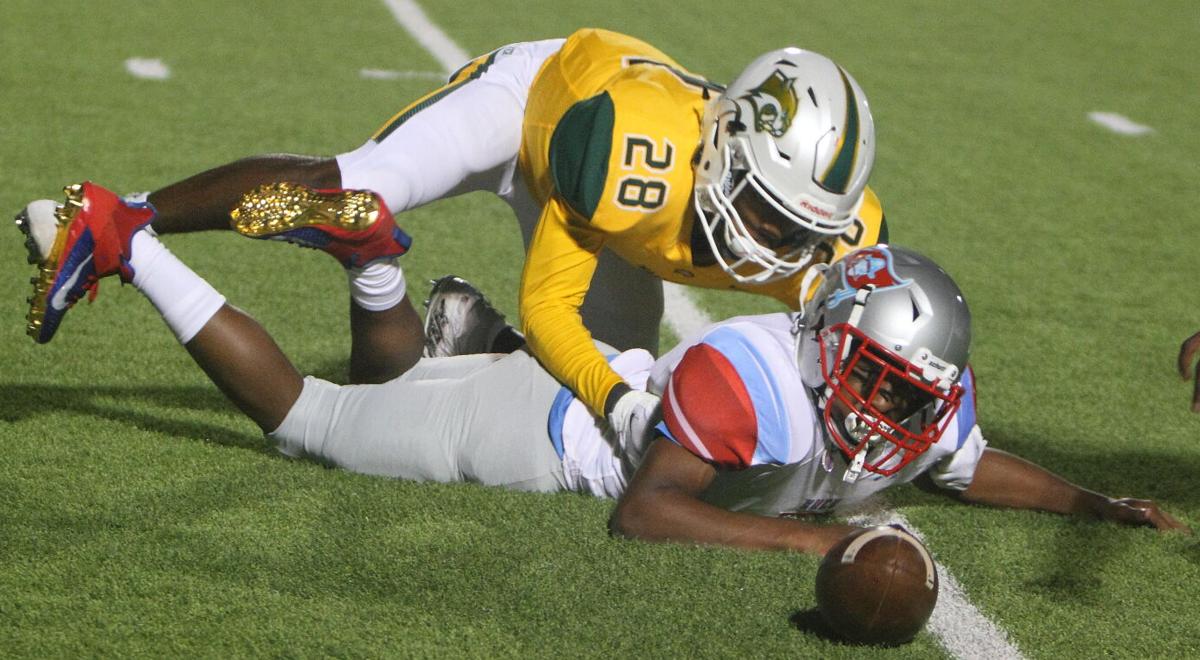 Walker’s Victrell Mimms (28) looks to recover a fumble against Broadmoor. 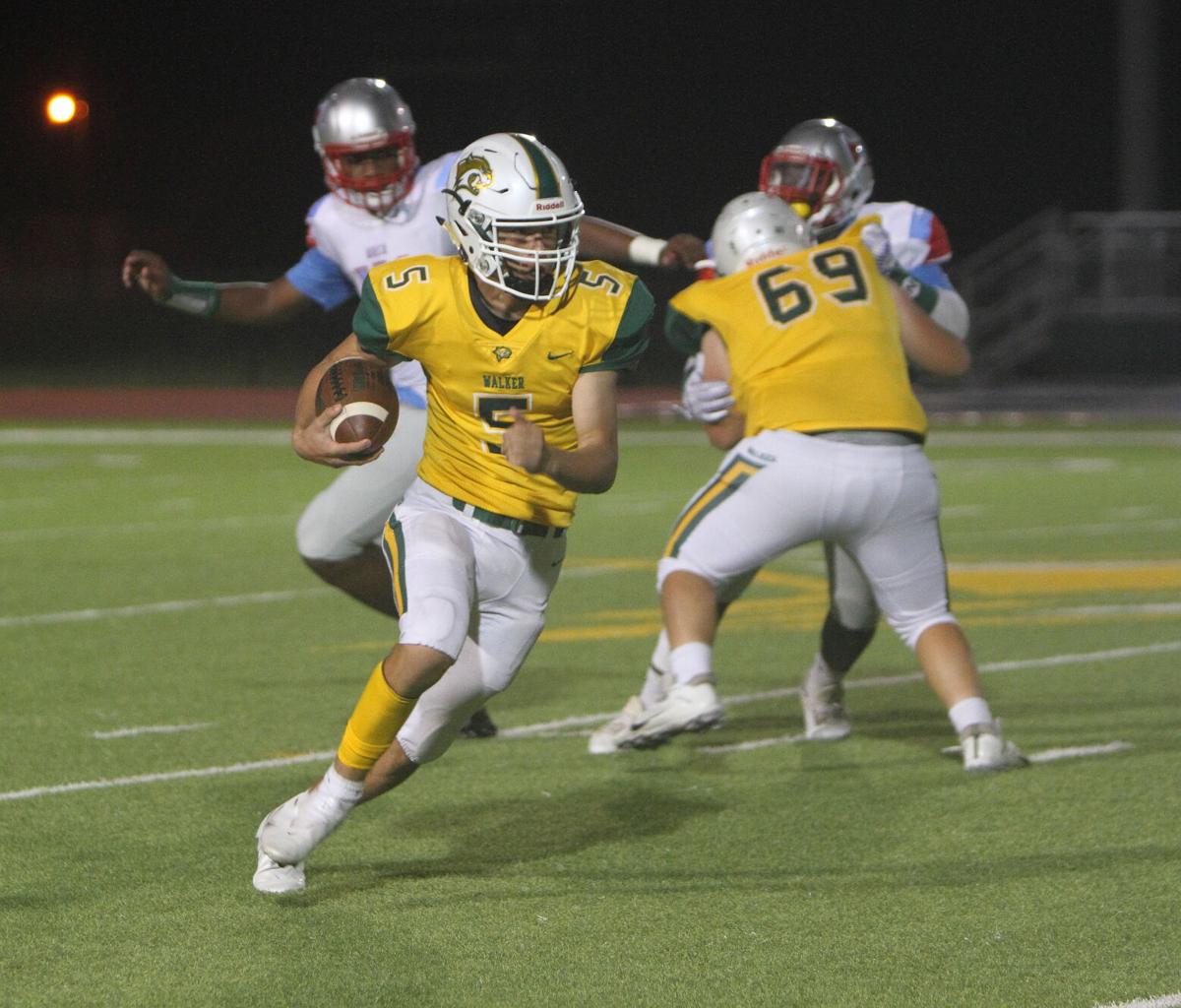 Walker’s Carson Rocker (5) had a 45-yard touchdown run against Broadmoor.

WALKER – It’s safe to say the Walker football team got back on track in its game with Broadmoor.

The Wildcats took advantage of short fields, scoring 49 points in the first half on the way to a 68-0 win over the Bucs at Wildcat Stadium on Friday.

“We were kind of on the other side of that last week and really just wanted to have a good week of preparation, wanted to play well, play fast, improve on some things, and I thought we did that,” Walker coach Chad Mahaffey said following Friday’s win after the Wildcats lost to St. Thomas More 61-7 last week. “Obviously it will step up next week in district in Scotlandville and all that, but I was pleased with everybody out there, and I thought some young guys late were making some nice plays. So it was good to see, and we were able to play a lot of guys.”

After forcing a Broadmoor punt to open the game, Rayshawn Simmons busted a 32-yard run on the Wildcats’ second play from scrimmage, setting up a 16-yard TD pass to Jasper Turner for a 7-0 lead.

The ensuing Broadmoor punt traveled minus-(6) yards, setting up Simmons’ 14-yard TD run on the next play for a 14-0 lead while beginning a trend of setting the Wildcats (2-1) up with short fields via poor punting.

A minus-(5)-yard punt was returned to the Broadmoor 1 at the end of the next Buccaneer drive, leading to Simmons’ TD run on the next play for a 21-0 advantage.

“Our line did great, good on blocking inside, and I get to the second level and just get out,” said Simmons, who finished with 85 yards on seven carries, all in the first half, as part of a 239-yard rushing effort from the Wildcats.

The next Broadmoor punt went zero yards, setting Walker up at the Bucs’ 22, paving the way for Walker quarterback Hunter Bethel’s 3-yard keeper for a touchdown and a 28-0 lead.

A 5-yard punt from Broadmoor’s own end zone gave Walker the ball at the Bucs’ 16, where Jacory Thomas carried for a touchdown on the next play for a 35-0 lead.

Broadmoor punted nine times in the game, averaging 14.4 yards and didn’t pick up a first down in the contest while putting up 25 yards of total offense. The Bucs’ longest play of the night was a 7-yard run on the final snap of the game.

“All you can do is execute, and I thought the guys did that,” Mahaffey said. “If you’ve got the better team, you want to play like it, and I thought the guys played well. We’ll look at the film, and just like last week … there will be mistakes. We watched some things at halftime where we just busted some assignments here and there, and those are things that can catch up to you later in the season, so we’ll continued to work on that.”

Victrell Mims pulled down an interception to stop the next Broadmoor drive, and Walker struck on the next play with Thor Debetaz hitting Brian Thomas on a 27-yard touchdown pass for a 42-0 lead.

“I was reading the play, and I saw the ball in the air, so I just jumped as high as I could to grab it,” Mims said of the turnover. “I came down and tried to run it back, but they were grabbing me everywhere.”

Jaylen Mitchell recovered a fumble on the ensuing kickoff at the Broadmoor 15, leading to Bethel’s TD pass to Peyton Richard on the next play for a 49-0 lead at halftime.

Walker didn’t let up as Andrew Brown returned the second half kickoff to the Broadmoor 39, where CJ McClendon carried three straight times for 15 yards, setting up a 29-yard TD pass from Debetaz to Noah Cecil for a 55-0 lead.

Bethel and Debetaz combined to go 8-for-12 for 108 yards with four TD passes, while McClendon had seven carries for 74 yards.

After forcing another punt, the Wildcats took over at their own 46, where McClendon busted a 54-yard touchdown run on the next play, stretching the lead to 62-0.

A 17-yard punt to end the next Broadmoor drive set the Wildcats up at the Bucs’ 43, setting quarterback Carson Rocker’s 45-yard TD run to cap the scoring.

“We’re never out trying to embarrass anybody,” Mahaffey said. “Credit to them and those kids for sticking it out, and they’re in a tough situation, but especially when you have the ball in your hands, you can’t do anything but run hard, otherwise you’re risking yourself. The two kids busted long runs, and they were good plays by them.”