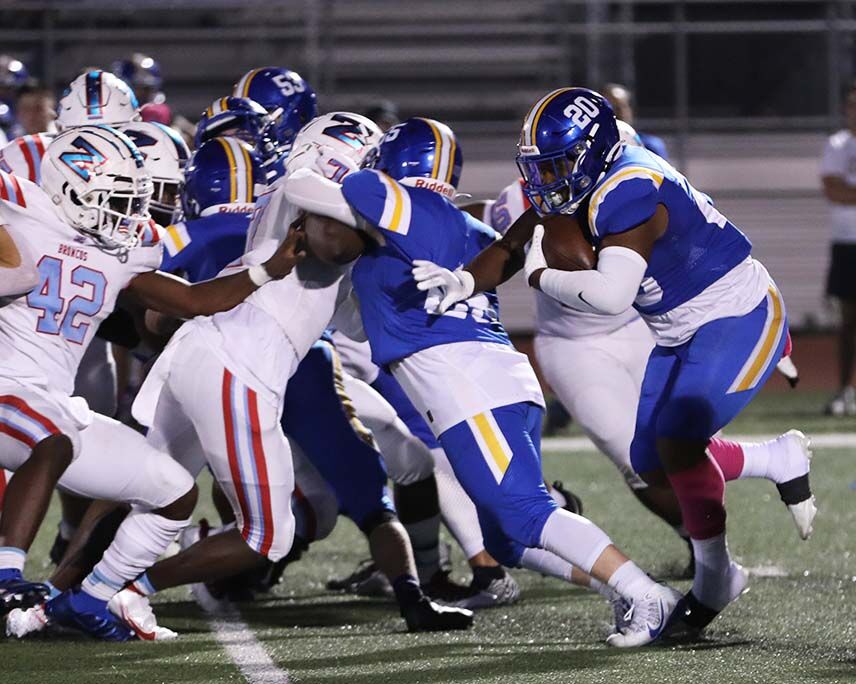 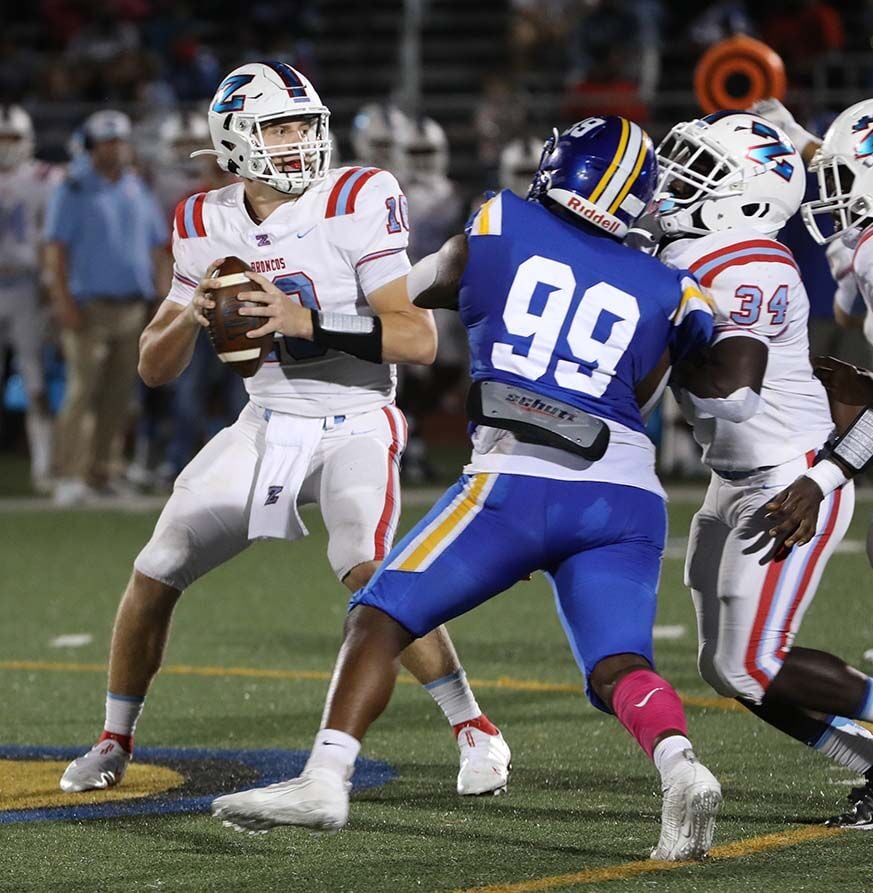 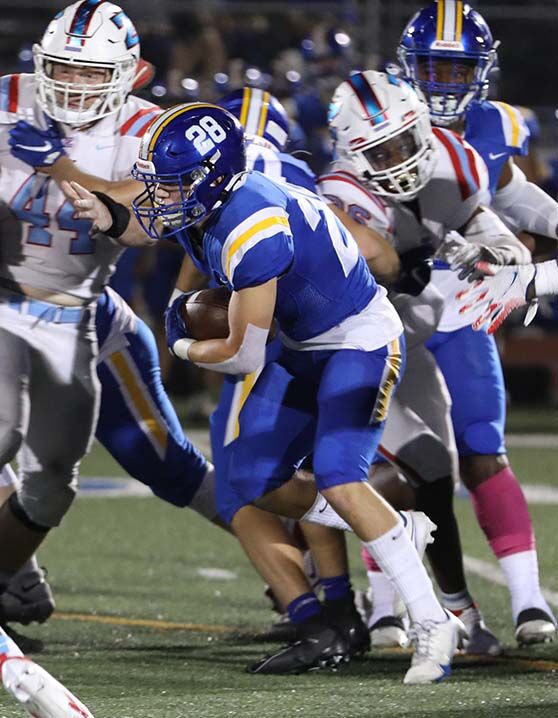 On Friday, Westmoreland’s worst fears came to life as ZHS quarterback Eli Holstein threw for 416 yards and three touchdowns, sparking the Broncos to a 54-21 win over the Eagles in the District 4-5A opener for both teams at Live Oak on Friday.

Westmoreland’s goal heading into the game was to work the clock by holding on to the ball, but things didn’t go to plan as the Eagles punted on their first three drives, with the Broncos turning the ensuing possession into a touchdown each time.

“We gave up the big play a few times,” Westmoreland said after his team dropped to 4-1 and 0-1 on the season. “We weren’t able to sustain drives early, and that kind of went against the game plan and put us behind the 8-ball quick. Things kind of snowballed, but our guys continued to fight, so I am proud of their effort in being able to shake back …”

Following a three and out to start the game, the Eagles punted, and Zachary followed with an 11-play scoring drive that was capped by Connor Wisham’s 5-yard TD run, helping ZHS to a 7-0 lead.

Another Live Oak punt led to a Zachary touchdown as Kameran Senegal had two catches for 69 yards, setting up Holstein’s 2-yard run for a 14-0 lead.

The next Live Oak punt set Zachary up at its own 46 after a false start penalty, and two plays later Holstein hit Senegal in stride on a 54-yard touchdown pass for a 21-0 lead. Senegal finished with six catches for 152 yards.

“Their dudes could score from anywhere at any time, and we knew that,” Westmoreland said. “We were there at times. The quarterback dropped them in there, a few times just made great throws. Other times, they just outran our guy. At times, you just kind of tip your cap and say ‘hey, it is what it is.’ We were in coverage a number of times and they out run you. What are you going to do?”

Two plays later, the Eagles lost a fumble at the Live Oak 41, setting up a six-play drive that ended in Camren Stewart’s 1 yard touchdown run for a 28-0 lead.

“You just can’t do that against anybody, but you really can’t do it against teams like that,” Westmoreland said of the fumble and his team’s inability to move the ball. “They kind of did what we’ve seen on film and what they’ve done in the previous four or five weeks for those guys. They just get after it, and they fill gaps fast. They fly to the ball. They rally, and they’re sure tackles. I don’t think we had many, if any, broken tackles. When we got there, they were making the play. Not being able to sustain drives kept time on the clock, put their offense out there and that put us, like I said, behind the 8-ball quick.”

Live Oak, which had seven first downs in the game, picked up its first two on the ensuing drive, which ended on downs at the Zachary 46 when Tyler Graves was sacked.

That enabled the Broncos to put together a three-play scoring drive that culminated in Holstein’s 21-yard TD pass to Jordan Williams for a 34-0 lead. Holstein went 3-for-3 for 59 yards after the Broncos were flagged for a false start on the first play off the drive.

Live Oak’s Hudson Byers returned the ensuing kickoff to the Zachary 40, where Graves hit TJ Magee on a middle screen on the next play for a touchdown, cutting the lead to 34-7, which was the score at halftime.

“I was able to break behind the d-line once they blitzed, and then once I got the ball, my o-line led me all the way to the end zone,” said Magee, who had three receptions for 63 yards and eight carries for 32 yards. “That’s a good team. We were able to score on them three times, which was an improvement from last year, when we didn’t score on them at all. We’re just going to keep our head up and get ready for the next game.”

Zachary didn’t let up after the break as Holstein connected with Charles Robertson on a 69-yard touchdown pass on the second play of the second half for a 41-7 lead. Robertson had five catches for 145 yards.

“We just need to slow down the game and really just worry about yourself,” said Live Oak defensive lineman Luke Ydarraga, who had a sack, said. “Do your job, and then we’ll succeed, but we just weren’t doing that. Had missed tackles, and it got out of hand.”

A Live Oak punt and a penalty backed Zachary to its own 9, but the Broncos worked their way out of the jam as Stewart had three straight runs totaling 33 yards to set up his 47-yard touchdown run, pushing the lead to 48-7.

Another Live Oak punt led to another Zachary score, a 15-yard run by Stewart to cap a six-play drive for a 54-7 lead. The key play was a 26-yard run by Holstein to the Live Oak 25. Stewart finished with 10 carries for 130 yards.

The teams swapped punts, and Live Oak took over at its own 20. Two plays later, Graves connected with Kyvan Lee on a 54-yard pass to the Zachary 22. A roughing the passer call against the Broncos moved the ball to the ZHS 11, leading to Daylen Lee’s 1-yard touchdown run four plays later, cutting the lead to 54-14.

Live Oak forced another punt and took over at its own 44, and three plays later, Sawyer Pruitt found CJ Davis behind the defense on a 53-yard touchdown pass, and Landon Ratcliff added the PAT for the final margin with 1:44 to play.

“It was play where the freshman quarterback had come in,” said Davis, who had four catches for 60 yards. “He was kind of nervous, but I was telling him, ‘Man just come out here and just play.’ Don’t worry about anything. He threw (to) me wide open in the middle of the field, so we scored. He did a great job.”

“I’m proud of our kids,” Westmoreland said. “They continued to fight. They continued to battle, and that’s all we can ask of these guys. That’s (Zachary) a special group. That’s a semifinal/championship team right over there. For our guys to continue to fight and do that, I’m proud of their effort, and I’m proud of what they were able to do tonight, but I don’t believe in moral victories, nor do any of us. We don’t teach that here. The best part is, at midnight we flush it and we get ready for Walker next week, and we’ve got another physical ball game that we have to go into and get ready for.”