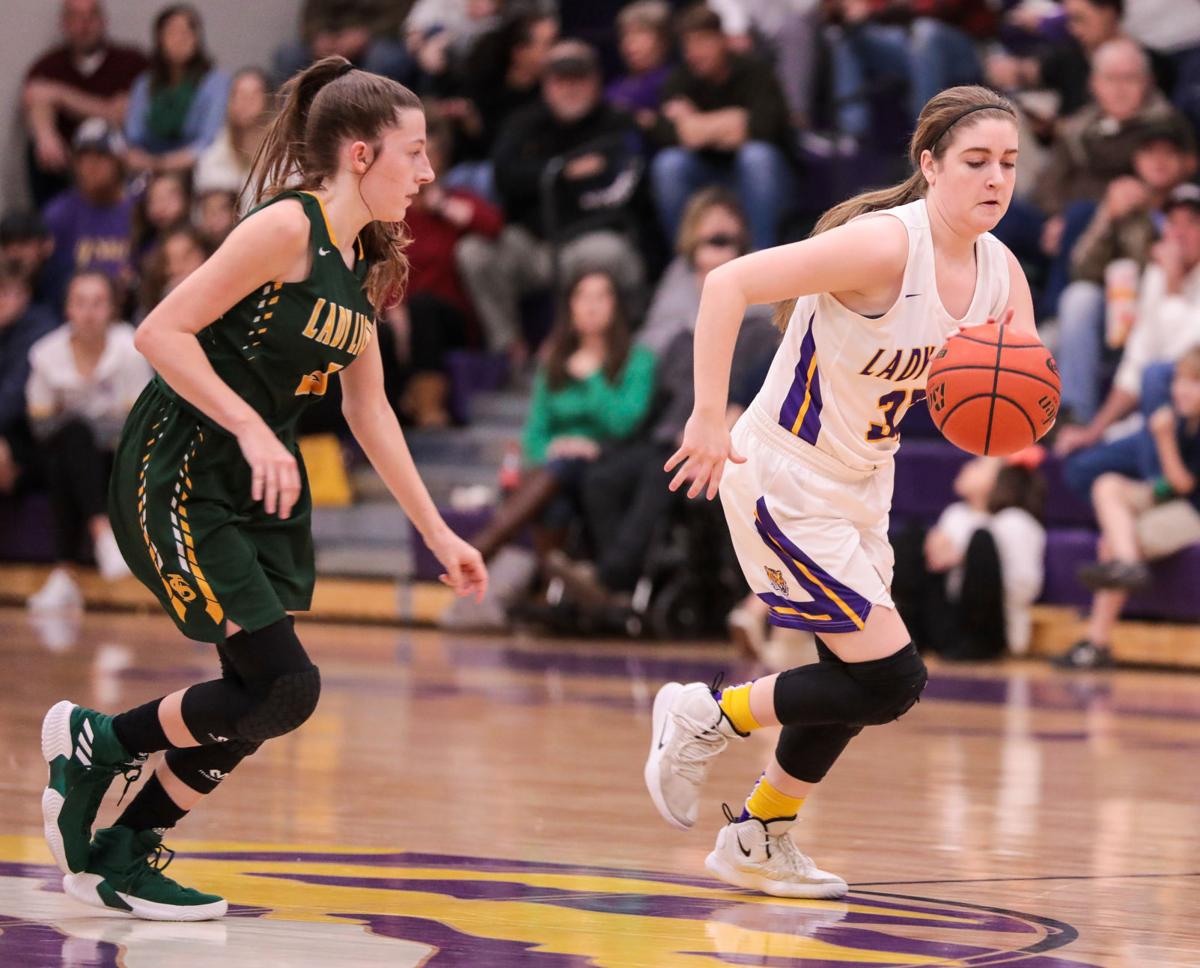 Doyle's Claire Glascock (33) drives up court on a fast break in front of French Settlement High's Laura Cox (5) last season. Glascock had 17 points against the Lady Lions on Tuesday. 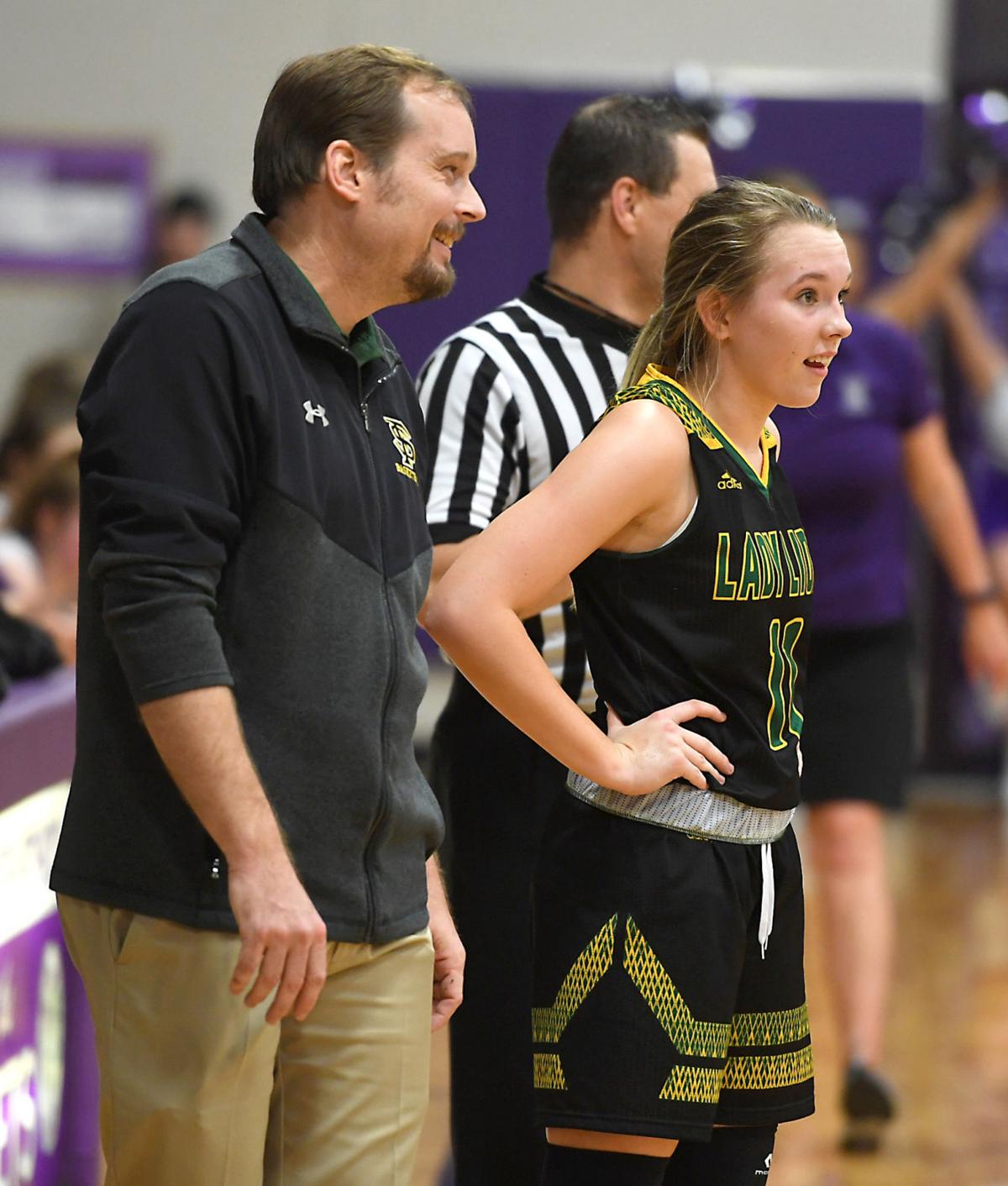 Doyle's Claire Glascock (33) drives up court on a fast break in front of French Settlement High's Laura Cox (5) last season. Glascock had 17 points against the Lady Lions on Tuesday.

LIVINGSTON – The Doyle girls basketball team is taking things one step at a time, and the Lady Tigers moved another step toward their ultimate goal Tuesday night.

Four players scored in double figures and Doyle cruised to a 70-29 win over French Settlement, wrapping up the District 10-2A title at the Doyle Elementary gym.

“That’s definitely a goal (in the) preseason,” Doyle coach Sam White said of winning the district after her team moved to 25-3 and 9-0. “Our district’s super-tough – St. Thomas, and Northlake, and French Settlement, and there’s not a lot of room to rest, so that was big for us. The girls stayed super-focused through it, and we were able to come out and kind of put them away and go attain that goal.

French Settlement (27-6, 5-4) came into the game with all five starters battling illness, but FSHS coach Daniel Martin didn’t make any excuses for his team.

“There’s things that we can control, and we didn’t control, but it definitely took a toll on us,” he said. “We couldn’t even practice the last two days because of it (virus). It’s definitely taken its toll, but I’d rather it be this week than next week.”

As big as the final margin wound up, the game was close early on FSHS’ Mae Babin's putback cut the lead to 8-7. But Elise Jones’ jumper sparked a 16-0 surge that spanned the end of the first quarter and into the second quarter, putting the Lady Tigers up 24-7.

“Sometimes things click really well, and tonight that was one of those times,” White said. “We did good job defensively of covering up their best player (Dannah Martin, who had nine points), which is huge when you play them, and we got a lot of transition points. Even in the half-court, they packed it in, so you hit some outside shots, and they’re forced to come out, you can dump it in. We got on a roll. We play like that, and that is exactly the type of basketball we want to be playing right now heading into the playoffs.”

The majority of the points during the run came via French Settlement turnovers.

“There’s times we just weren’t mentally in sync with what we were supposed to be doing,” Daniel Martin said. “But the two key things are you can’t make, live ball turnovers and you can’t allow second and third shots. I think that’s really the keys to beating any high-pressure teams is taking those two things away.”

Dannah Martin’s basket stopped the run, but Doyle's Claire Glascock, who had 17 points, hit one of her five 3-pointers, sparking a run that extended the lead to 43-14 at halftime.

“I think most of those points come from our defense, just getting good defensive stops and just looking for the outlet girl,” said Jones, who hit two of her three 3-pointers while scoring eight of her 15 points in the second quarter. “We notice that, and every time we just try to look up the floor to see that open person, I think that’s where our run started kicking in, and plus our shots were falling, so that also helped.”

Glascock buried consecutive 3-pointers to start the second half before Dannah Martin hit three free throws to cut the lead to 49-17.

The Lady Tigers, however, relied on their outside shooting while working their half-court offense with Presleigh Scott, Jones, Glascock and Kourtlyn Lacey hitting 3-pointers tot help stretch the lead to 64-24 heading into the fourth quarter.

“The shots were open, and we took them,” Glascock said. “I think I started off 0-for-4, so that was not good, but I just kept shooting. You have to shoot in a zone, so that’s what we did.

“I think it will definitely help us down the road if people pack it in tonight and we have confidence in shooting because we’ve done it a few times, or vice versa,” Glascock said of working in the half-court. “If they come outside, we can give it to the inside."