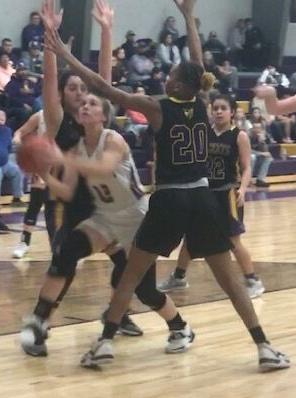 Doyle's Elise Jones eyes the basket as a pair of Denham Springs players, including Kiana Lee (20), defend during Wednesday's game. Jones had 32 points as the Lady Tigers scored a 62-35 win at Doyle. 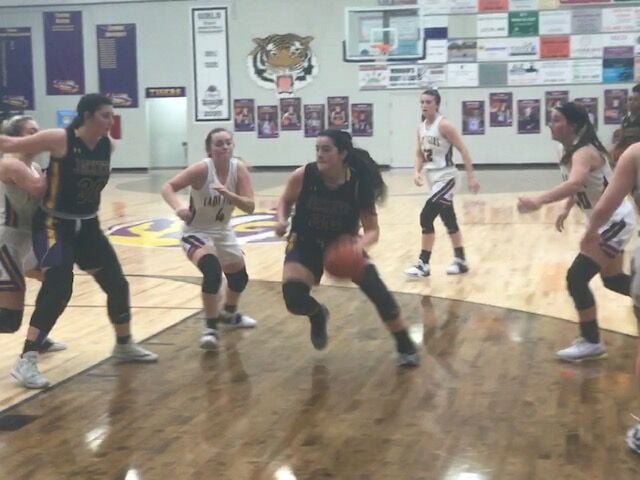 LIVINGSTON – An early combination of Doyle’s pressure defense and Elise Jones on offense left Denham Springs was bit too much for the Lady Jackets to overcome.

Doyle got rolling early, and Jones turned in a 32-point effort, helping the Lady Tigers to a 62-35 win over Denham Springs at Doyle on Wednesday.

“Our goal is to always force the other team to play our style, honestly, with tempo control and pressure defensively – and even offensively because we love to run the floor,” Doyle coach Sam White said. “We try to take control that way. We don’t want to play somebody else’s style of basketball because ours works well for us, so we like for you to play ours. It doesn’t always happen, but that is the goal of what we try to do.”

“I thought we played a good basketball game tonight,” White continued. “We’ve played some good basketball games before this, but I was really impressed with the effort and the grittiness we had, especially from the tip. I really was. I was glad to see it.”

“When you play somebody as good as Doyle, our schedule’s full with some good teams,” Zito said after his team dropped to 11-9. “Me and Sam talked about that. She even said, ‘thank you for keeping the game’, because she’s having a hard time finding games. Parish teams don’t want to play her, and we’ve played every year since I’ve been here … This team doesn’t have the talent, but man, the character’s there. I keep telling them that.

“We got punched in the mouth to start,” Zito continued. “They did what they wanted. We didn’t execute the things that we worked on, and they capitalized off of it. They hit shots, and the lead jumped out to so much, it was hard to play catch-up.”

The Lady Tigers (15-4) capitalized on Denham Springs turnovers to spark a 26-3 run to open the game in which Jones scored 16 points.

Denham Springs’ only points in the quarter on a free throw and a basket by Kiana Lee.

“We talked about starting fast,” White said after her team played its first home game since a 47-43 loss to LaGrange on Dec. 4. “That was something that we wanted to do. It’s a great time to do it. We haven’t played here in a while. We were excited about it. I didn’t know we would start that fast. I’m not going to lie to you, because they’re a good basketball team. I don’t care how young they are, the program’s good, so they’re going to know what’s going on. When we started off that fast, I was glad for it. I was impressed by it. I thought it was good. It was a good thing.”

It was the opposite for Zito.

“The key to success in girls basketball is if you can pressure well, and even when teams beat the pressure, you’re going to have the turnovers because you’re speeding them up,” Zito said. “I thought early on when we did beat it, we were throwing the ball away, and we never could get in a good rhythm. That’s because they’re so good at what they do. We worked on it, but it’s not something at game speed and all that that you can prepare for.”

Jones’ free throws extended the lead to 34-5, and Presleigh Scott, who finished with 15 points, went to the Doyle bench after being called for a charge with 4:57 to play in the first half when DSHS put a dent in the lead.

Libby Thompson hit a pair of 3-pointers and scored eight points during a run which cut the lead to 35-20 before Doyle went into halftime ahead 37-20 on a pair of free throws by Jones with 5.7 seconds left in the first half.

“You take Presleigh off that team, it’s a different group,” Zito said. “I’ve never seen a kid who stands out with effort and heart like her. Don’t get me wrong, she’s a talented player, but she is non-stop. I preached it to my kids. I watched her warm up. She warms up hard.”

“She’s a big part of their team, so when she went out, we were able maybe to gain a little more confidence,” Zito continued. “My girls were playing. We didn’t let up. They’re just a good team, and they just outplayed us tonight.”

Doyle went 6-for-6 at the line, while Thompson hit a 3-pointer to open the third quarter, and the Lady Tigers limited the Lady Jackets’ shots while working the defensive boards with Jones’ jumper stretching the lead to 49-26.

Collin Macias’ layup cut the lead to 49-28 heading into the fourth quarter.

Doyle slowed the tempo but continued to score, with Jones getting a pair of layups and Scott a putback to stretch the lead to 55-28 before the teams began trading points.

“We tell them play like you’re ahead, but when the opportunity arises to score, you still want to do that,” White said. “We don’t want to take any bad, quick shots. Let’s take a good shot that comes in the flow of what it is we’re doing, unless it’s a fast break, obviously take it.”

Jones summed up the win for the Lady Tigers.

“It’s just really good for the team coming off of two wins, and this is kind of a big win against a 5A school, always being kind of rivals with Denham, and at you home gym having everyone cheer you on is just even more exciting for us,” she said.

Zito, meanwhile, said the game can only help his team’s growth.