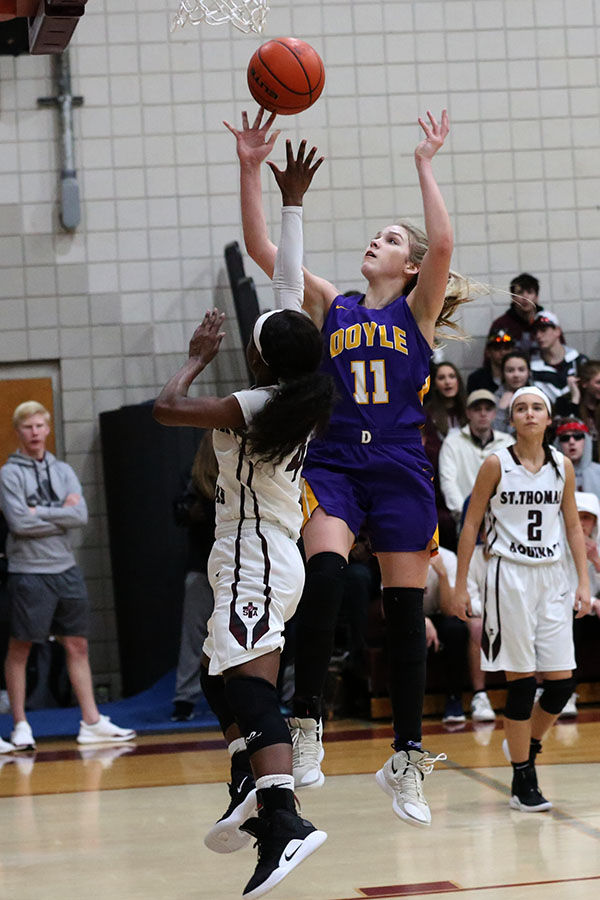 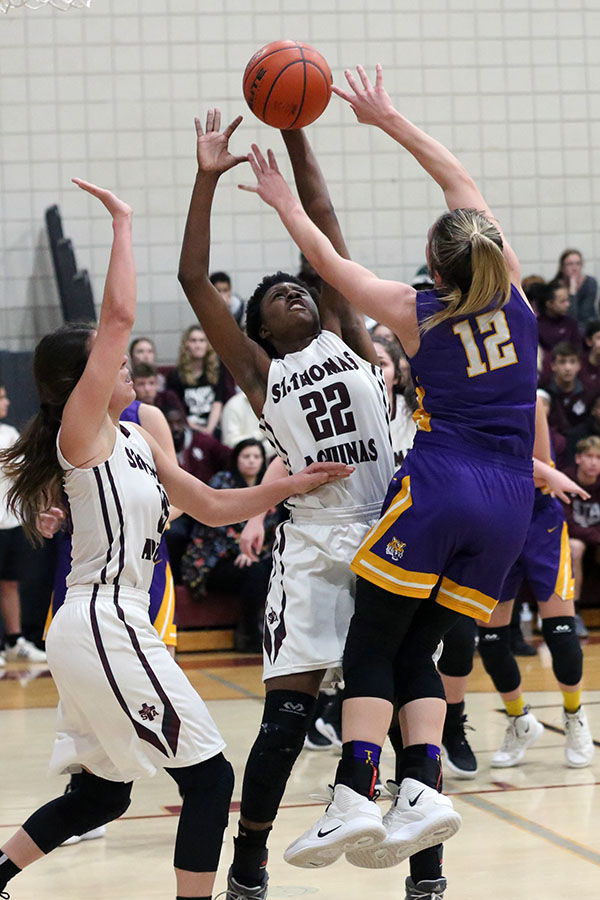 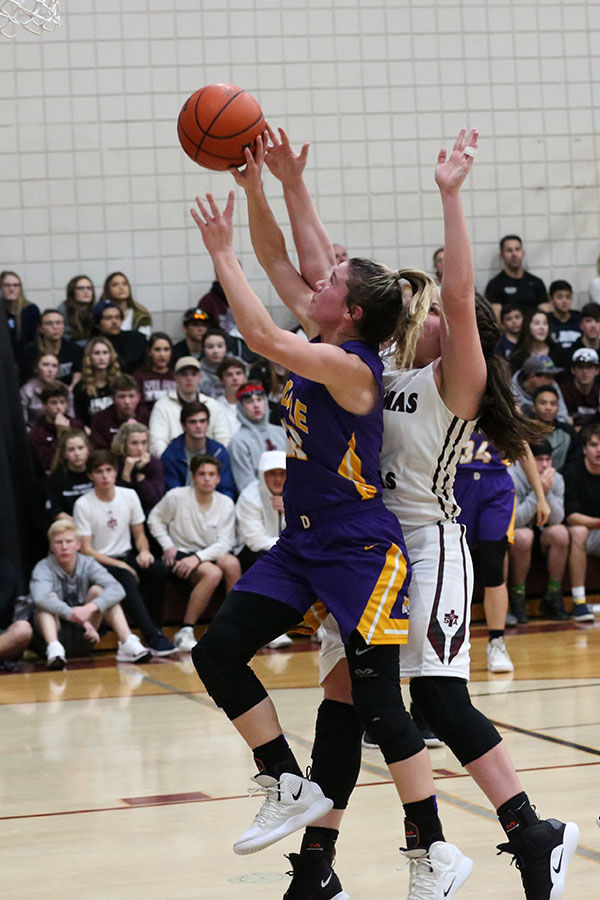 Doyle's Elise Jones (12) shoots and draws a foul on St. Thomas Aquinas' Sadie McGowan in the first half of Friday's game. 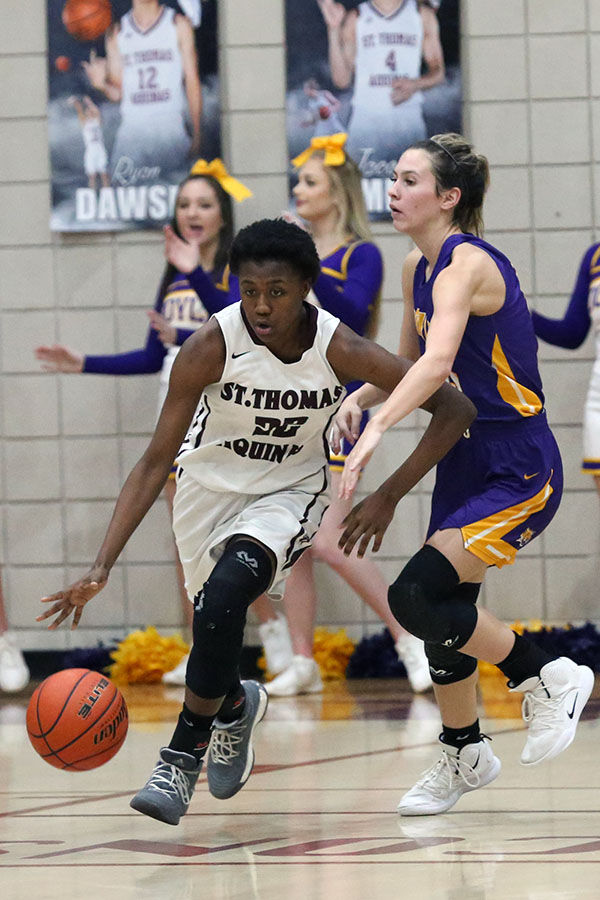 St. Thomas Aquinas' Jaylyn James (22) gets the rebound over Sydney Taylor (13) and brings the ball down the court to score. 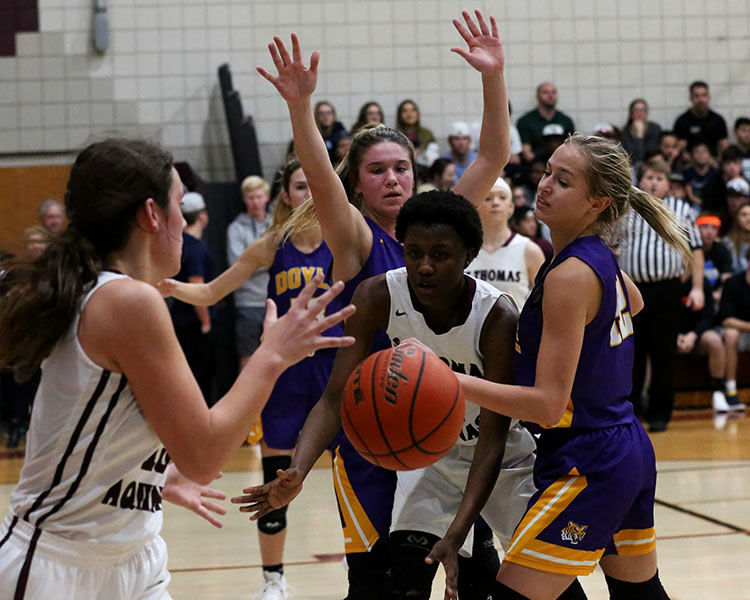 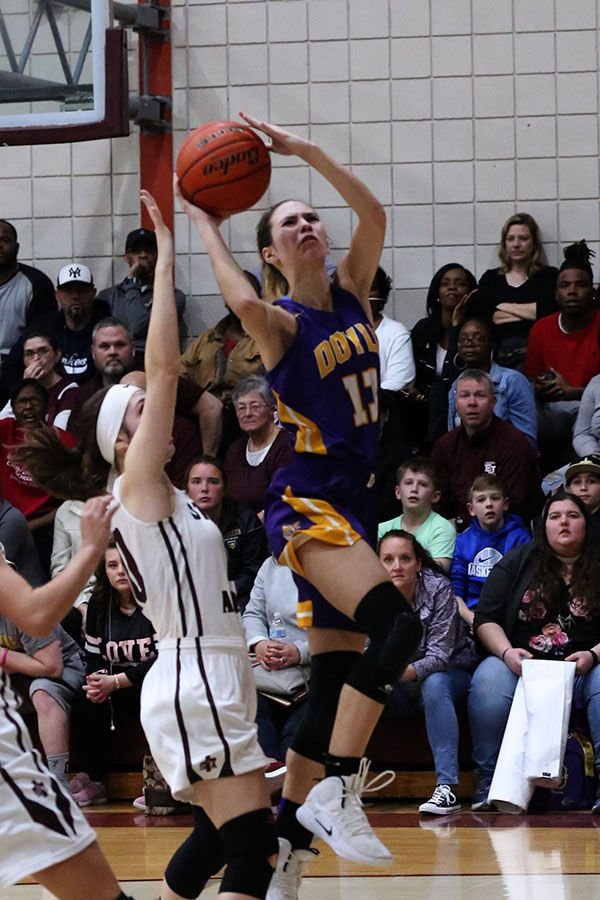 Doyle's Sydney Taylor (13) goes up for two late in their game against St. Thomas Aquinas on Friday night.

Doyle's Elise Jones (12) shoots and draws a foul on St. Thomas Aquinas' Sadie McGowan in the first half of Friday's game.

St. Thomas Aquinas' Jaylyn James (22) gets the rebound over Sydney Taylor (13) and brings the ball down the court to score.

HAMMOND – Doyle’s girls basketball team had a chance to wrap up the District 10-2A championship with a road win over St. Thomas Aquinas on Friday.

Doyle fell behind early and never recovered in a 55-46 loss to the Lady Falcons, but Lady Tigers coach Sam White is focused on how her team’s loss and playing in front of a standing-room-only crowd at STA can help when it comes to the postseason.

“Oh man. It’s tough, I’m not going to lie,” White said after the Lady Tigers dropped their second straight game at STA. “I don’t mind playing here. I really don’t. I like the atmosphere because it reminds me of a playoff atmosphere, and I think it’s good to prepare us for the playoffs since that’s right around the corner. They did a good job here on their home court.”

STA did most of its early damage inside as the Lady Tigers struggled from the floor. STA’s Sadie McGowan and Jade Brumfield each scored six points in the first quarter.

Jaylyn James, who finished with a game-high 28 points, hit a basket to put STA ahead 17-5 at the end of the first quarter.

“I think it was more us not starting off in the beginning at a better pace,” said Scott, who finished with 22 points. “We missed a lot of our shots and our free throws, and I think we could have done better on offense.

“You’ve got to be able to adapt to your surroundings and make it work on the court.”

Doyle’s only points in the quarter came on three free throws by Presleigh Scott and a basket from Sydney Taylor.

The Lady Falcons stretched the lead to 21-9 early in the second quarter, but Doyle worked the defensive boards and used an 8-2 burst to cut the lead to 23-17 on Meghan Watson’s free throws with 1:20 to play in the first half.

Doyle got within 28-27 on Watson’s free throw with 5:02 to play in the third quarter, but Caroline Ingraffia hit a 3-pointer, keying a 5-0 burst by the Lady Falcons.

“I was glad with fight they showed to come back,” White said. “I wish we could have turned that corner, and unfortunately tonight we did not.”

Scott’s consecutive inside baskets cut the lead to 33-31, but STA relied mostly on its defensive rebounding to push the lead to 39-31 on James’ layup.

James hit a three-point play to stretch the lead to 44-33 early in the fourth quarter, and the closest Doyle got the rest of the way was 44-37 on Watson’s basket.

“We missed a lot of easy shots around the basket, and also a lot of free throws,” White said after her team went 21-for-26 from the line. “We have been hammering free throws at practice, so I’m not sure (what happened). We’re going to have to figure something else out. If something’s not working, figure something else out. We will. Those (free throws) are super important. We make those, the outcome of the game might be a lot different.”

The Lady Falcons worked the ball around, forcing the Lady Tigers into fouling mode. STA went 12-for-15 from the free-throw line in the fourth quarter, while Scott, Watson and Taylor fouled out for Doyle.

“Honestly, we were going to stay with the game plan, which was to do what we do,” White said of the Lady Tigers’ plan coming out of halftime. “We did decide to go with a five out offense to kind of drag them out of the lane a little bit, but to me, it was an offensive issue. I mean, defensively, we obviously could have done a better job stopping No. 22 (James). She did a really, really good job … but to me, it was an offensive struggle. You miss easy shots and free throws, and all of a sudden, everything feels hard. Everything feels like a struggle, and for us to score felt like a struggle.”

Lilly Maggio’s free throws made the score 55-43 before Doyle’s Claire Glascock hit a 3-pointer for the final margin.

“We’ve still got more work to do,” White said. “Trust me, we’ll never be perfect. That’ll never happen. We’re just striving to be better. I told them the playoffs are coming up, and that’s a brand new season, and you are owed nothing. So everything that we are going to get is something we have got to work for, so let’s get after it.”

The News is interested in your feedback! Please tap here to leave some thoughts on our feedback form or follow this link:

Check out these Livingston Parish headlines from February 4, 2019!