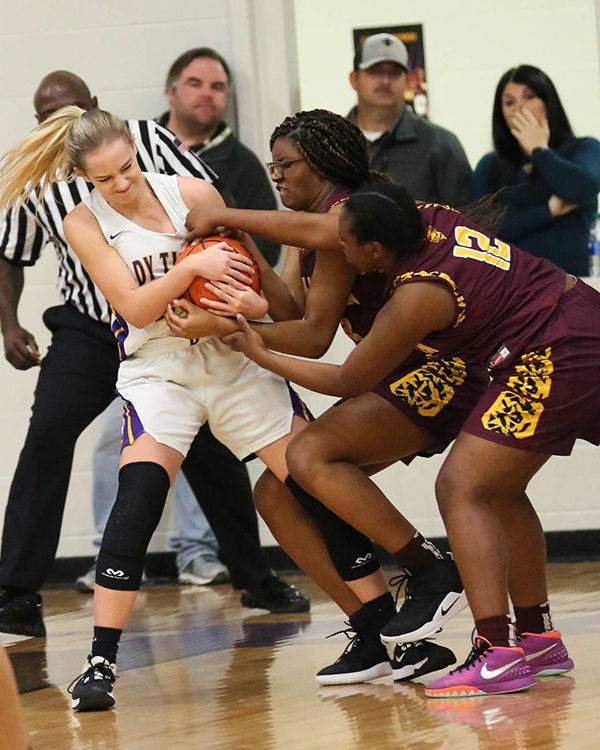 Doyle's Meghan Watson (left) battles for a rebound against Franklin. 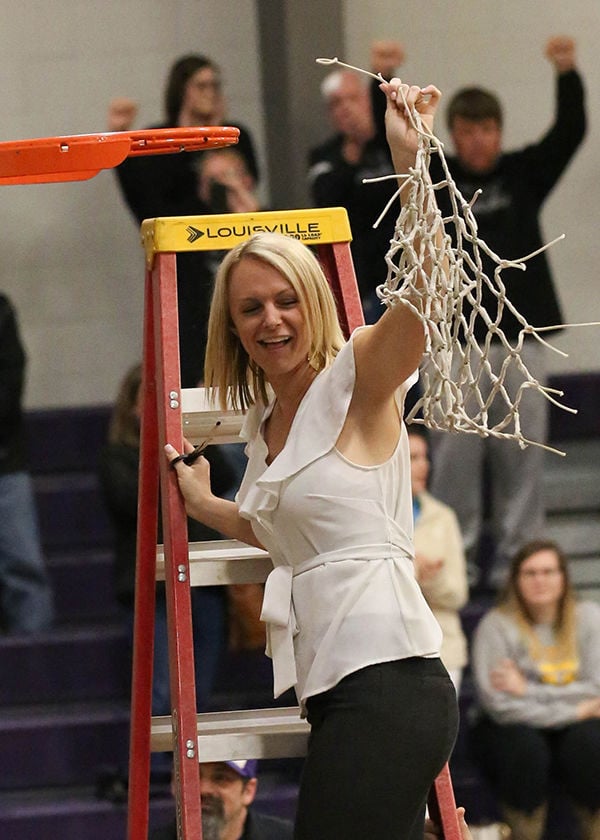 Doyles head coach Sam White takes down the last of the net in celebration of their win over Franklin Thursday night to advance to the state tournament. 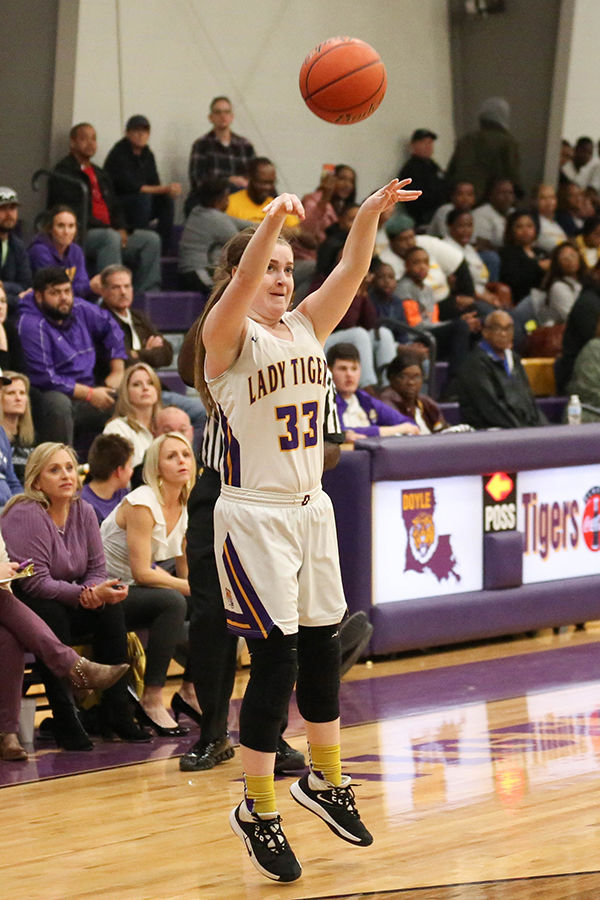 Doyle High's Claire Glascock fires off a 3-pointer against Franklin. 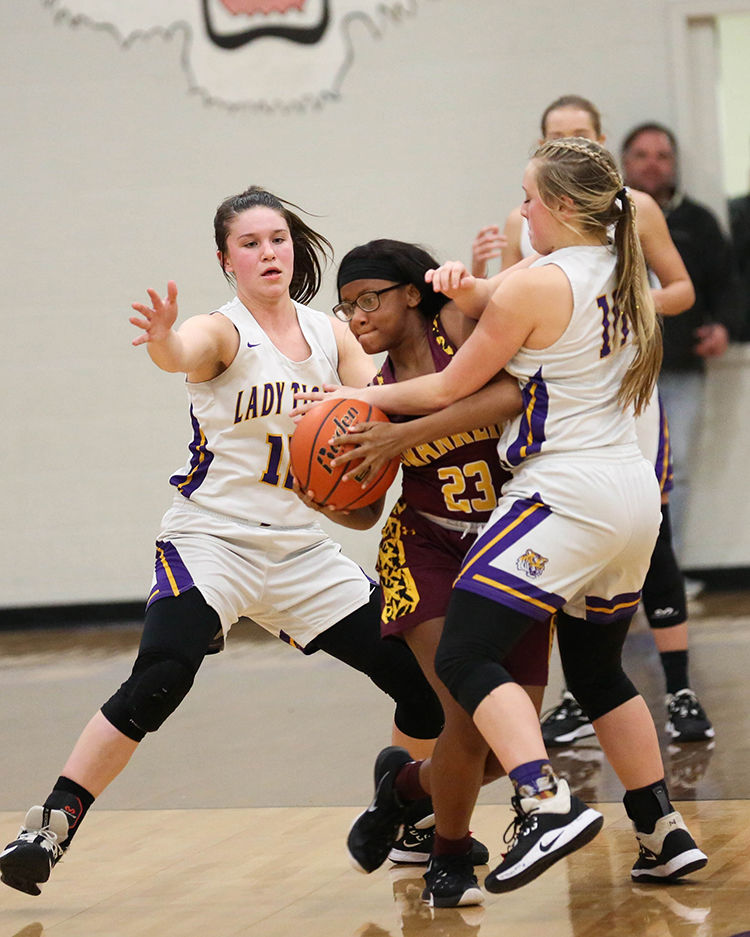 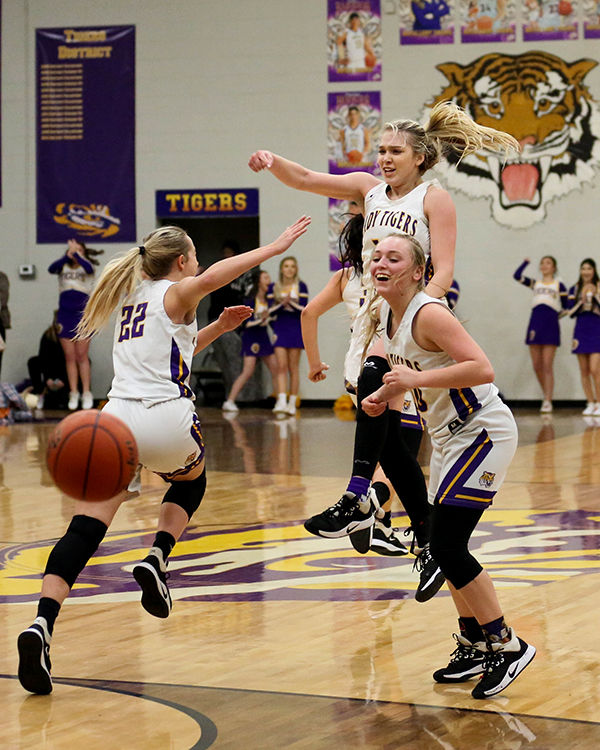 Doyle players celebrate after a exciting play in the late moments of the second quarter.

Doyle's Meghan Watson (left) battles for a rebound against Franklin.

Doyle players celebrate after a exciting play in the late moments of the second quarter.

LIVINGSTON – This time around, there isn’t any doubt.

The Doyle girls basketball team is headed to the state tournament.

The top-seeded Lady Tigers put the bitter taste of last season’s quarterfinal loss to Rayville in the rearview mirror, using a dominating defensive effort to spark an 88-49 win Thursday over No. 8 Franklin in a Class 2A quarterfinal playoff game at the Doyle Elementary gym .

“We still have a mission,” Doyle coach Sam White said. “It’s not over, but we wanted to make sure this quarterfinal round said something, and I think it did. We wanted to smother them on both ends of the court, offensively, defensively, really take the life out of them, and that meant full-court pressure both ways. I thought we executed that very well tonight.”

Doyle jumped out to a 5-0 lead, which Franklin cut to 5-4 on a pair of baskets by Amari Butler, but that was as close as the Lady Hornets got the rest of the game when Elise Jones nailed an inside bucket, fueling a 28-2 run by the Lady Tigers to close out the first quarter.

“What happened last year really motivates us just to never let that happen again," said Jones, who finished with 16 points. "Because that was just so devastating, and now it just feels so good that we finally can get past the third round and go to state. That was a big factor. If we play really good defense, then there’s no way that they can win the game because we know we can rely on our offense and our shots to win us a game, so that was a really big deal.”

The key was Doyle’s full-court, man defense, which flustered Franklin into turnovers. After Meghan Watson’s free throw put the Lady Tigers ahead 13-6, Doyle used a flurry of turnovers on the baseline, with Presleigh Scott hitting a pair of baskets and Kourtlyn Lacey connecting on a 3-pointer to help push the lead to 20-6.

Claire Glascock did the damage on the back end of the run, scoring eight points, including consecutive 3-pointers to close out the first quarter, putting Doyle up 33-6.

“I feel like sometimes they lose me in transition because we drive the ball a lot, and they guard the high percentage shot, so when they kick it out, then I knock it down,” said Glascock, who finished with 22 points, including four 3-pointers. “Last year really haunted us, and we wanted to come out and take care of business fast, leave them no hope. We did not want to repeat last year, and it feels great.”

Butler, who finished with 25 points, hit consecutive baskets to get Franklin within 35-10, but Scott’s jumper pushed the lead to 47-14 as Doyle continued the defensive pressure.

From there, Franklin closed with a run that cut the lead to 51-22 at halftime. Even then, Doyle was poised to keep its collective foot on the gas pedal.

“When we went back in the locker room, Coach Sam said that they’re not going to give up and we’ve got to keep fighting with the same intensity, and that’s exactly what we did,” said Watson, who scored 16 points.

The teams traded baskets early in the third quarter before Scott’s steal and layup extended the lead to 59-29.

Glascock took over during the next stretch, scoring nine points to help push the lead to 72-30 before Doyle went into the fourth quarter with a 77-33 lead.

“I think I had a couple of layups just running the floor off of defense,” Glascock said. “Our defense always gets us going, and that happened a lot tonight. A lot of people got breakaway layups. You have to keep up the intensity. You don’t want to slack back. This is the playoffs. Everybody wants it. They’re not going to give up, so you can’t give up either.”

Franklin cut the lead to 79-38, but the Lady Tigers worked the boards to help build an 87-44 lead on Watson’s free throws with 2:15 to play when White went to her bench.

“Part of that, honestly, me not knowing if I wanted to leave them on the floor and let them experience the win from the floor or not,” White said of going to the bench. Then it got a little rough, so then we made the adjustment at the end to do that. As a coach, I’ve never been in that position, and it’s a good position to be in to be honest. To have to make that decision, it’s a good thing.”

Now that the Lady Tigers are past the quarterfinals, it’s on to the state tournament and another challenge, which White is confident her team will embrace.

“They’ve worked hard, and they deserve everything that they go get, but they’ve got to go get it, and they know that,” she said. “This is one step. Super proud. Super excited. Ready for the next one.”