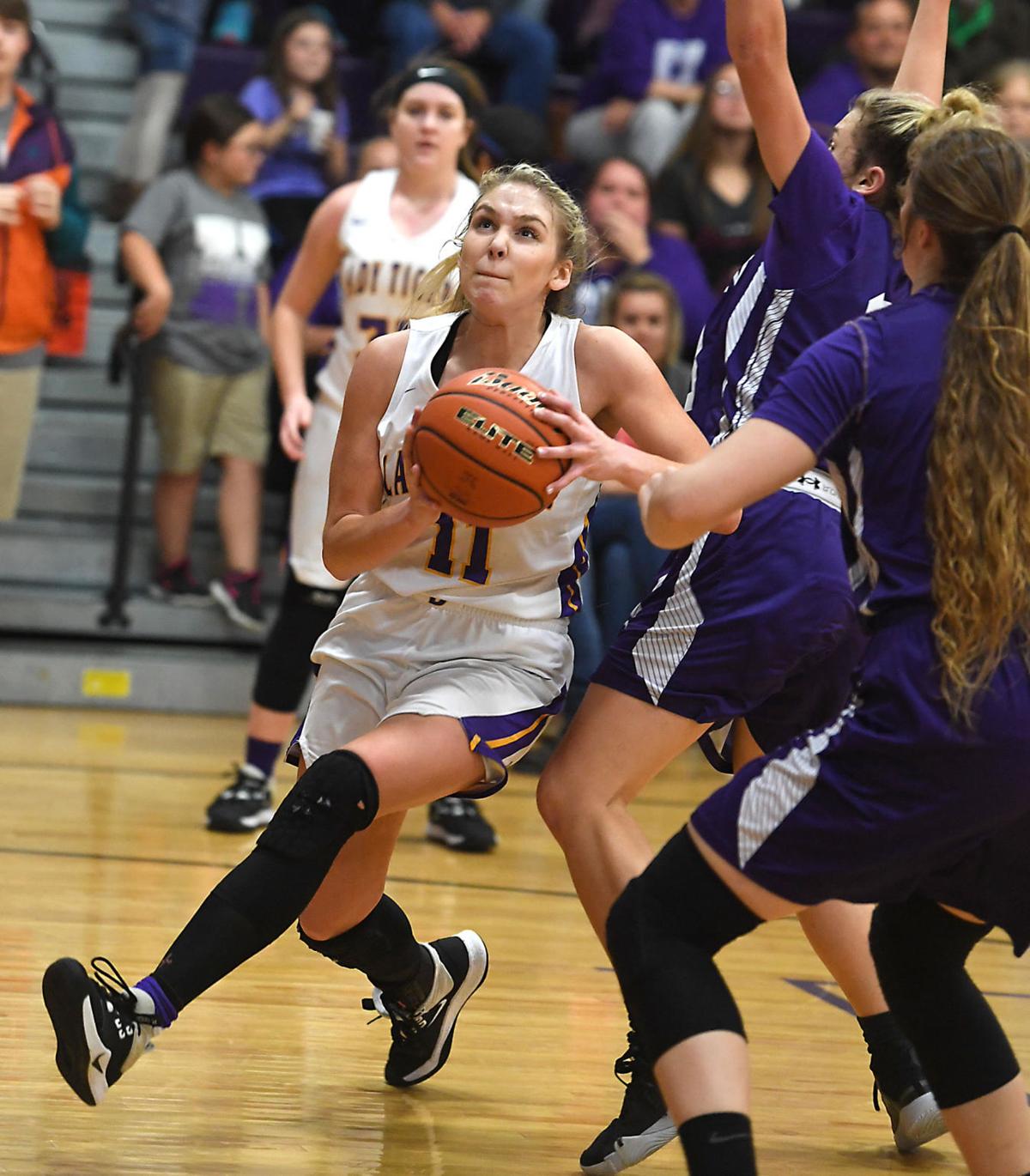 Doyle’s Presleigh Scott (11) scored 20 points, including 13 in the second half, to help the Lady Tigers take down St. Thomas Aquinas, 83-61. 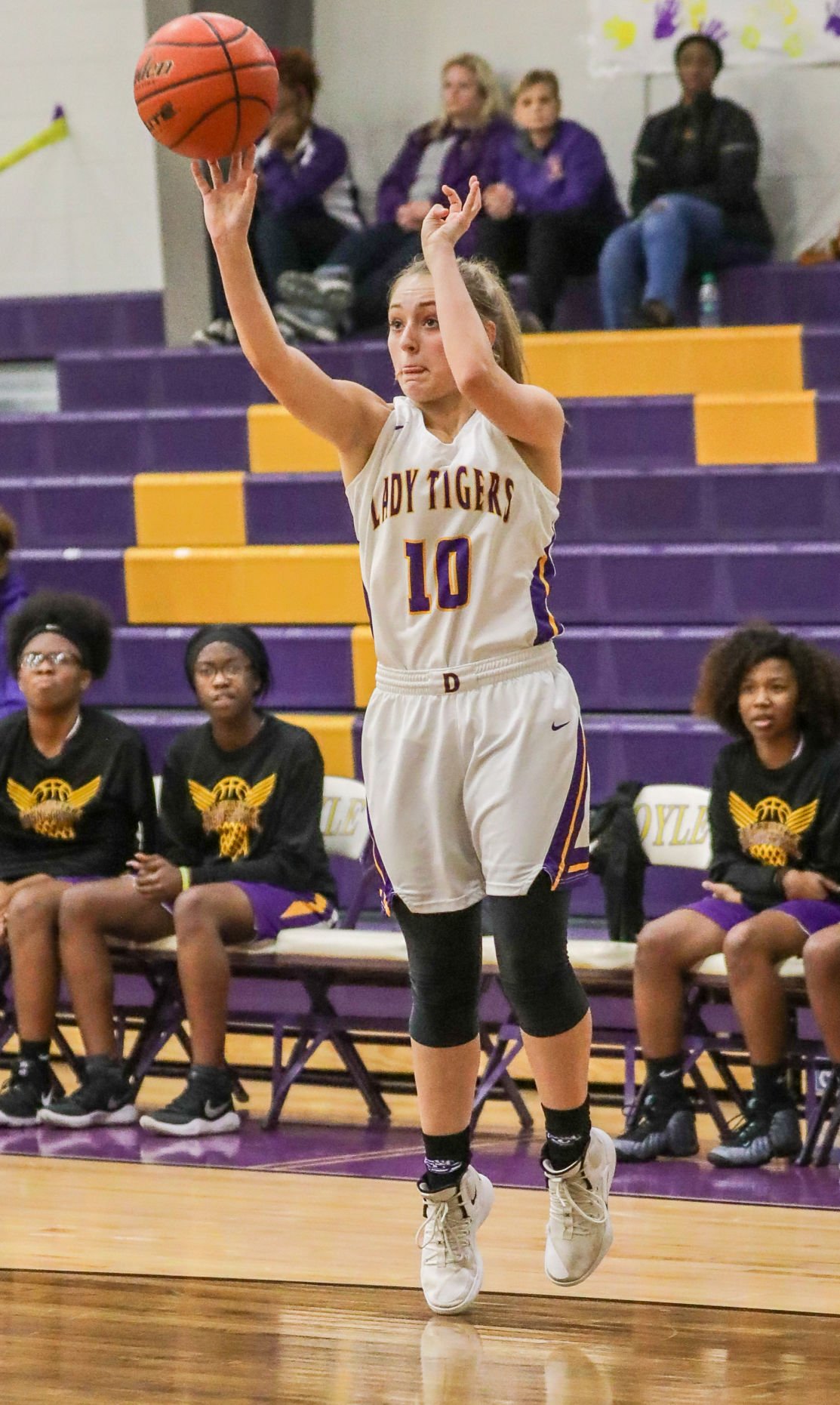 Doyle's Kourtlyn Lacey (10) was one of five players in double figures in the Lady Tigers' 83-61 win over St. Thomas Aquinas. 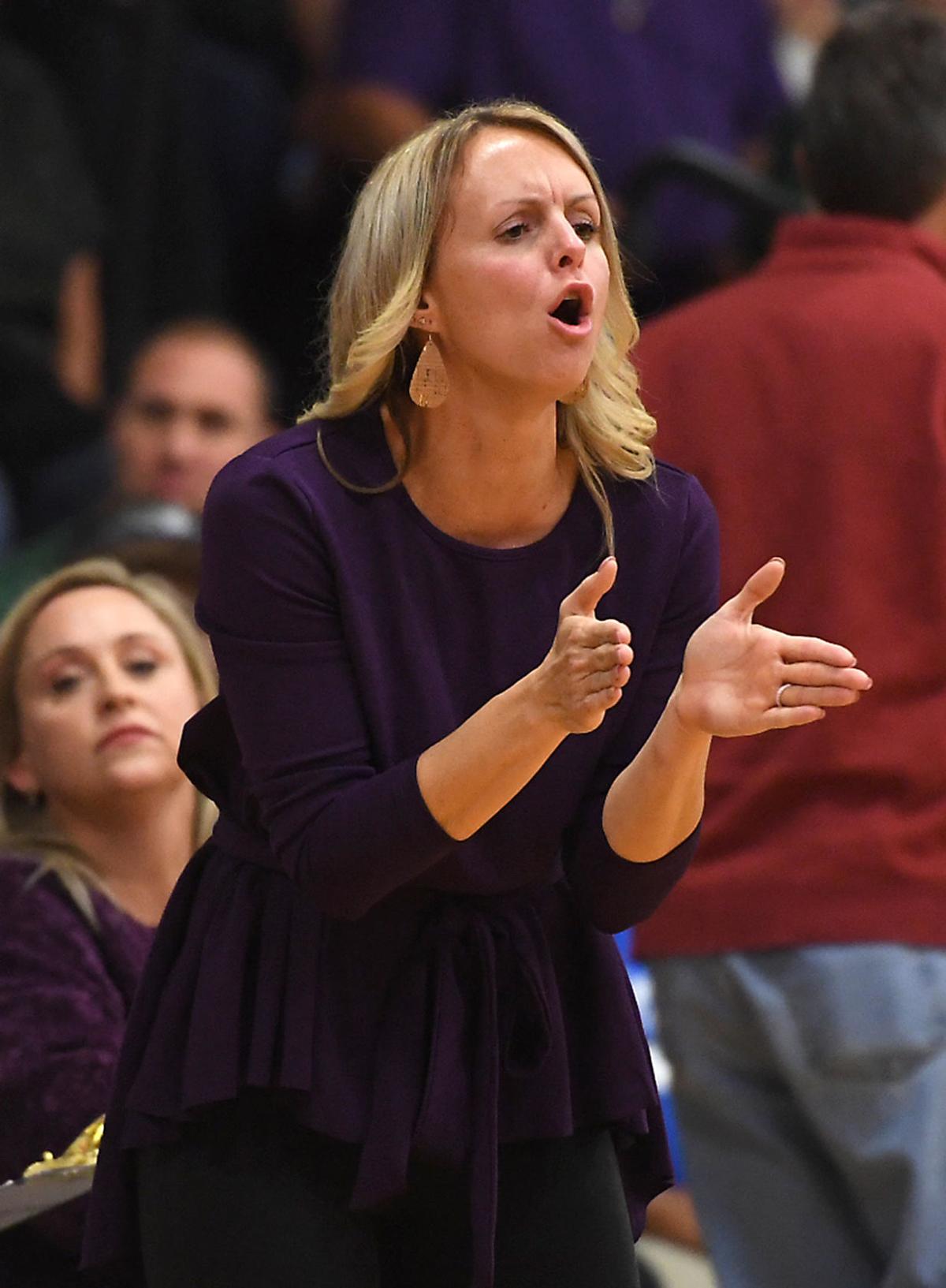 Doyle High coach Samantha White on her team's 83-61 win over St. Thomas Aquinas: "They had been stewing for a while. We had a game plan. They came out and executed and the score reflected that. They really wanted it.”

LIVINGSTON – Normally there’s isn’t a need for additional incentive for Doyle going into a District 10-2A encounter with arch-rival St. Thomas Aquinas.

The Lady Tigers got that and more in a four-point setback against the Lady Falcons on Jan. 3 in the Allstate Sugar Bowl Prep Classic in suburban New Orleans.

Fast-forward two weeks and in the rematch between two of the state’s top teams in Class 2A Doyle made quite a statement with a resounding 83-61 victory Friday in a game played at Doyle Elementary.

“This is district, and this is where you’ve got to go hard,” Doyle senior Meghan Watson said. “I know they beat us last time and we wanted it bad. We came out for blood. We were ready. We were thinking about it all day. We were going to go in and give it every single ounce of us.”

Doyle’s offensive output, which included five players scoring in double figures and 57.1% shooting (35 of 56), was the most points STA has allowed this season since its last matchup with the Lady Tigers, who dropped a 76-72 decision to the defending Division III state champion.

“We kind of had a bad taste in mouths after the last time we played them,” Doyle coach Samantha White said. “That was a super tough tournament and we had just played Fairview (a 87-85 win) who makes you run a track meet. They had been stewing for a while. We had a game plan. They came out and executed and the score reflected that. They really wanted it.”

Watson typified Doyle’s balanced effort with a game-high 24 points in support of leading scorer Presleigh Scott, who finished with 20 despite sitting out the entire second quarter with two fouls.

“We had a lot of motivation after losing last time,” Glascock said. “They’re our rivals. It’s a home game, big crowd. We weren’t tired like last time.”

The difference between the two teams took place over a nine-minute span that bridged the end of the first quarter with the second.

STA’s Jaylyn James, who scored 41 points in the team’s first meeting, picked up her third foul at the 1:40 mark of the first quarter and went to the bench with two points.

Not long thereafter Doyle, which led 16-9 after a quarter, lost the services of Scott to a second foul with 1:09 left in the opening quarter.

With their leading scorer on the bench for all of the second quarter, the Lady Tigers never missed a beat.

“We have six players that usually play a lot and every single one of them are capable of stepping up at any point in time,” Watson said. “All of us are very capable of playing.”

Glascock, who scored a season-high 25 points in the first matchup with STA, enjoyed her best quarter of the game, firing in three 3-pointers and Lacey added another during a 14-4 run that provided Doyle with a 30-13 lead with 3:27 showing before halftime.

While Doyle flourished, STA struggled offensively where the Lady Falcons were 5-of-18 in the second quarter and just 9-of-32 (28%) for the half and trailed, 36-20.

“Presleigh definitely scores a lot for us, but we know as a team we can all play and when one of us is down we always take up their slack,” Glascock said.

With Scott back in the starting lineup for the third quarter, Doyle’s offense went into overdrive with Scott and Watson combining to score 20 of the Lady Tigers’ 27 points that resulted in a commanding 63-38 lead after three quarters.

The Lady Tigers responded with a 12-2 spurt after the timeout with a lob to Watson and layin serving as the catalyst. Scott scored her team’s next 10 points in the run, including a pair of 3-pointers that made it 52-30 with three minutes left.

“We talked about winning one quarter at a time,” White said. “I told them that’s a good basketball team with some great basketball players, they weren’t going to come out and roll over. Anything you want, you better go take it. They’re not going to give it to you. We did a good job of going take it.”

Doyle’s red-hot offense, the result of superb ball movement and crisp passing, made its final 10 shots of the quarter and wound up leading 63-38 on back-to-back layups from Watson and Scott.

The Lady Tigers went on to lead by as many as 32 points (82-50) on a three-point play from Watson, who then joined three other starters on the bench with 1:33 remaining to bask in the glow of the team’s sterling performance.

“It’s a great feeling out there with a team that’s really clicking,” Watson said. “This is my last season, and this is what I’ve been working so hard for all of these years. … this feeling in those kinds of games.”