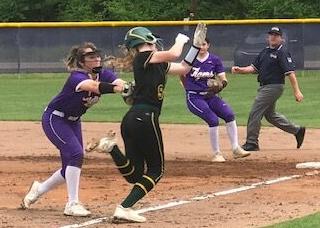 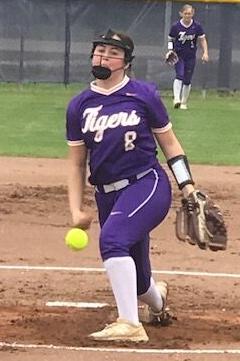 Marley Olivier got the win for Doyle against French Settlement on Wednesday. 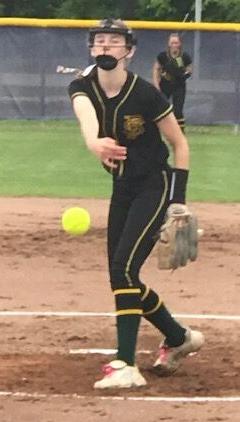 LIVINGSTON -- It took a while for both teams to get going, but when they did, things got really interesting.

Doyle built a 3-0 lead then held off seventh-inning rally by French Settlement in picking up a 3-2 win over the Lady Lions in District 10-2A play Wednesday at Johnny Sartwell Park.

“I never underestimate any team, and especially a team like French Settlement,” Doyle coach Amanda Decell said after her team moved to 19-5 and 7-0. “They give us a good game every year. It’s expected for us to play a good game. I do think we should have hit the ball better. We’re capable of hitting the ball better, but they did a great job against us.”

Meanwhile, French Settlement had the tying run on first to end the game.

“Coming over here, it always seems to be tight,” FSHS coach Blake West said, noting the teams went to extra innings two seasons ago at Sartwell Park. “Today it was competitive the whole game. We kind of put some pressure on them there at the end, and they were able to work out of a jam and pull it out.”

After Doyle stranded a pair of runners in the bottom of the sixth inning, Claire Cullen led off the seventh with a double to right field, and Stella Allison followed with a single to left that was misplayed in the outfield, cutting the lead to 3-1.

One out later, Blair Henderson’s grounder to shortstop drove in the game’s final run. Carmella Tranchina followed with a single, but Katie Harper grounded out to shortstop to end the game.

“I felt like our girls all season, they’ve been doing a good job attacking pitches in the zone, attacking pitches around the zone, staying aggressive at the plate,” West said after his team dropped to 16-8 and 3-5. “I felt like we did it the whole game today, and just the last inning there we were able to get some good, hard contact, get some base hits, get a few things working. It’s just one of those games where you wish you had a few innings to go.”

The game was scoreless until the fourth inning, when Elise Jones led off with a double to center field. She moved to third on Marley Olivier’s sacrifice bunt to FSHS starting pitcher Harper and took off from third to score on the throw to first base, coming in safely on a play at the plate to put Doyle up 1-0.

“I knew she (Olivier) was about to bunt, so I was just going to run as fast as I could to third and see if the passed ball was going to go home or if they were going to throw it back,” Jones said. “That was my whole plan, to make them throw so I could get home so we can get that first run just to get us started and just get a rally going.”

After Olivier retired the Lady Lions in order in the top of the fifth, Chloe Welda led off the bottom of the inning with a solo home run to left-center field for a 2-0 lead.

“It was right down the middle, and I just took that opportunity and just went yard,” Welda said of her first career home run. “I was very excited, and I think I needed that because I was kind of in a slump.”

Shelby Taylor reached on an error, prompting a pitching change from Harper to Emma Petite. Taylor advanced to third on a wild pitch and scored when Madison Diaville flied out to left field. KK Savant was thrown out at third on the play to end the inning.

Olivier picked up the win, giving up four hits, two runs and one walk while striking out three in a complete game.

“I just pitched it to my spots and let my defense to their work,” said Olivier, who had a one-hitter heading into the seventh inning.

“I felt like Doyle did a good job calling pitches,” West said. “Olivier did a good spotting her pitches today, really kept us off balance for most of the game. I felt like late we made some good adjustments and started hitting her harder.”

“We felt like (Harper) did a fantastic job hitting her spots while she was in the game,” West said. “She did a good job getting a lot of weak contact, a lot of weak pop-ups out of some of Doyle’s power hitters. I couldn’t have asked for a better performance out of her and give our offense a chance in this game.”