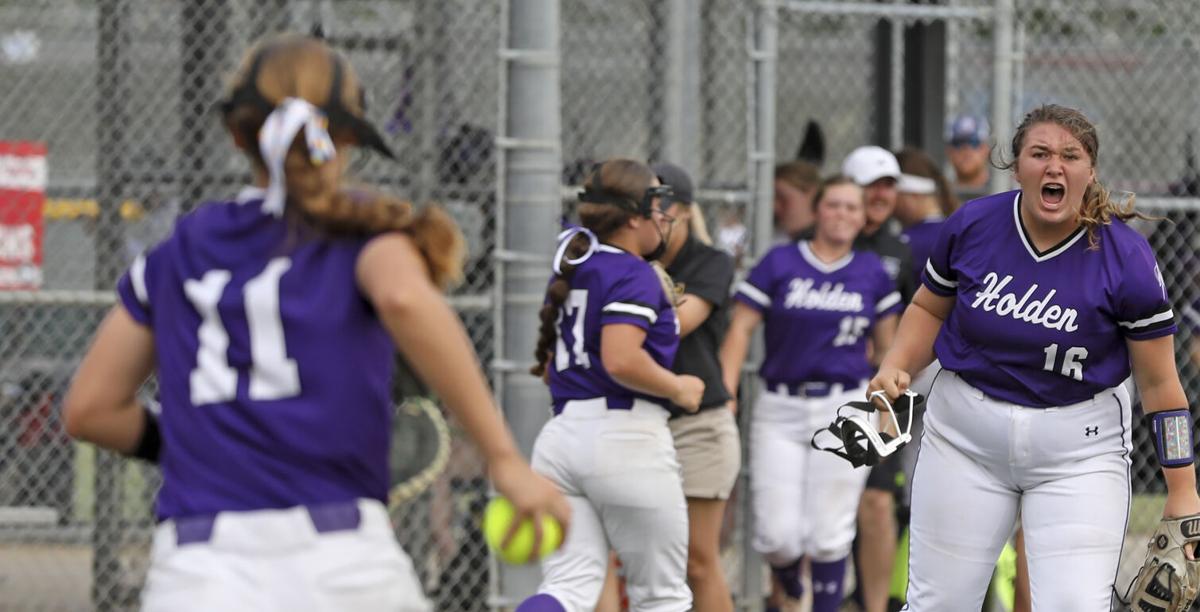 Holden pitcher Taylor Douglas (16) celebrates an out ending an inning during the Class B semifinal game on Thursday, April 29, 2021. 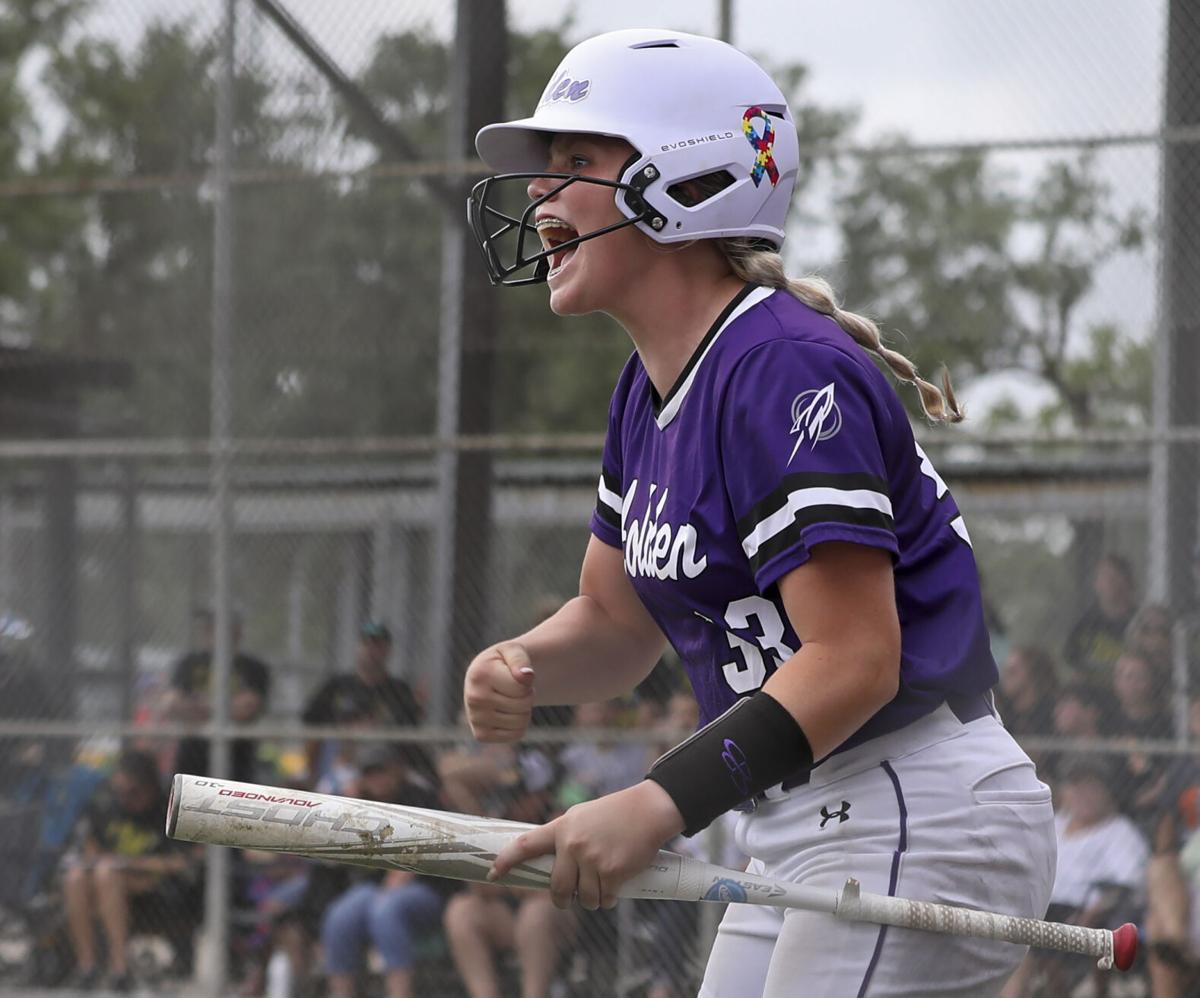 Holden’s Kacey Breithaupt (33) celebrates her team scoring during the Class B semifinal game on Thursday, April 29, 2021. 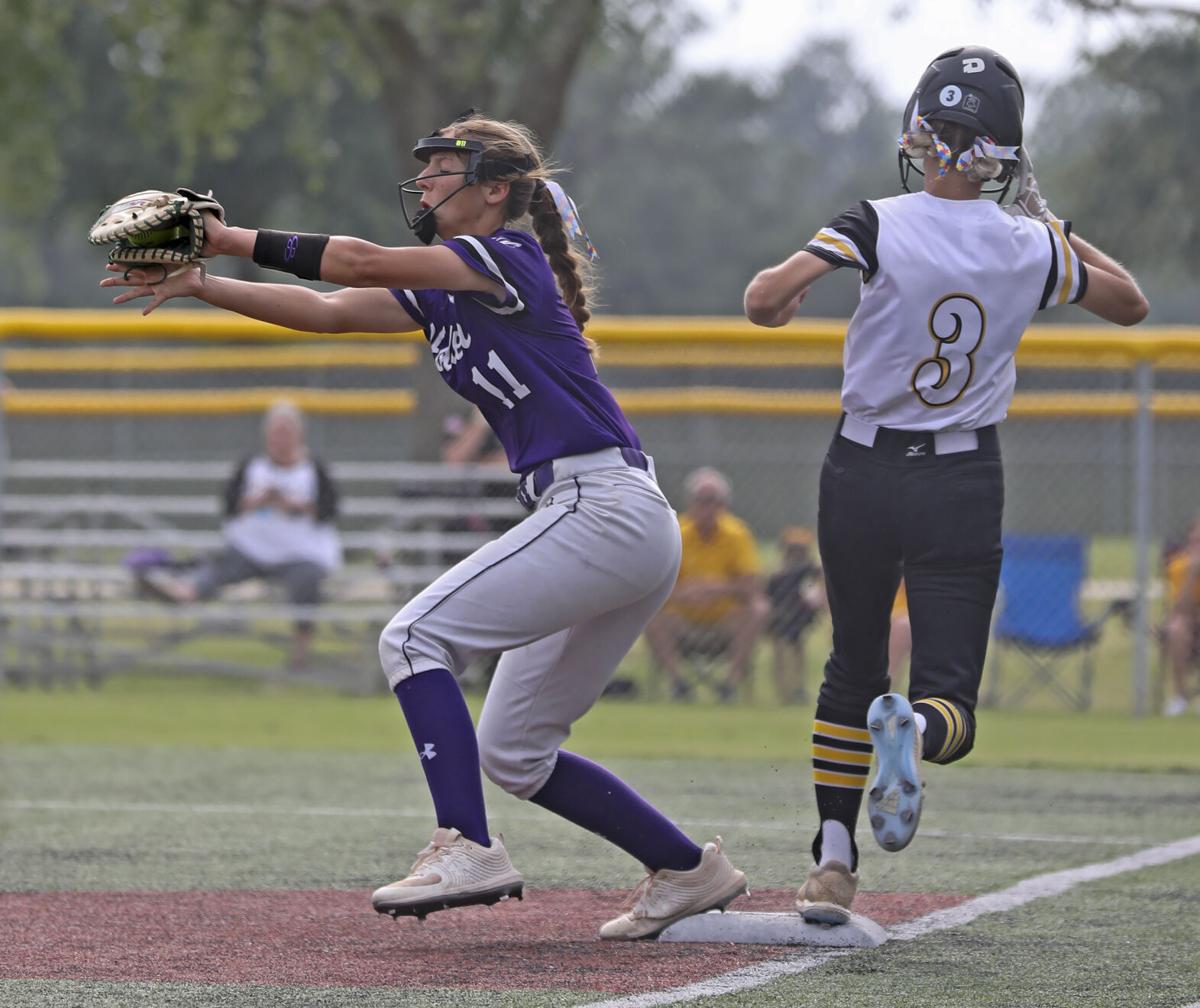 Holden first baseman Taylor Barfield (11) secures a catch to force out Florien’s McKenzie Brooks (3) during the Class B semifinal game on Thursday, April 29, 2021.

SULPHUR – It’s been a while since Holden last played in the Class B semifinals, but the Lady Rockets did what they’ve done in their past few trips to the state tournament.

Now they’re in the Class B state championship game again.

Taylor Barfield’s single past second in the bottom of the sixth knocked in the winning run as Holden outlasted Florien 12-11 in a marathon contest Thursday at Frasch Park.

“We knew coming into the game it was going to take all 21 outs, and we showed up and we committed to battling every single pitch, and that’s what every single person on this team did,” Holden coach Linzey Bowers said.

Holden will face Anacoco, a 9-8 winner over Quitman, for the state title Saturday at 3 p.m.

“It’s what you work for all year long,” Bowers said of returning to the state title game. “I’m so excited for all of these kids because they’ve had that goal on their minds since day one, and they’ve done everything I’ve asked them to do. They’ve worked hard every single day.”

The game was tied at 11 heading into the bottom of the sixth when Olivia Barnes singled up the middle to lead off, and Ava Rousell reached on an error at short to put runners at first and second.

That set up Barfield’s hit to put the Lady Rockets ahead for good.

“Outside is my pitch for sure, so when I saw it was outside, I knew it was good,” Barfield said.

Florien’s Layla Fletcher led off the bottom of the seventh with a single and moved to second on Kaleigh Carver’s fielder’s choice. Holden starter Taylor Douglas got a strikeout before an intentional walk to Gracie Rutherford, and Maddie Chreene flied out to right field to end the game.

“It just all comes down to where they were in the lineup,” Bowers said of the walk. “They had a runner on second and a base open at first base, so you never want to let the best hitter on somebody else’s team beat you. We had their two hitters circled, and one of them (Lauren Dees) hit the ball over the wall. That should never happen, but it did, and we weren’t going to let it happen again.”

The scoring parade started early as Florien picked four runs in the top of the first, with Cora Downs hitting a three-run triple to highlight the surge.

Holden tied the game at 4-4 in the bottom of the inning as Kacey Breithaupt, Barnes and Roussel had hits to drive in runs.

The Lady Rockets did the majority of their damage in the game hitting the ball up the middle.

“That’s what we prepped all week long,” Bowers said. “We knew the pitcher was going to try to spin it by us, and we knew she was going to bring in a change-up slow, so she said she’s not providing the pop. We’ve got to be disciplined … and trust our barrel to work inside the ball, hit it up the middle.”

Rutherford and Chreene had consecutive singles to lead off the top of the second, and both players scored when the ball was misplayed in right field on Chreene’s hit, giving Florien a 6-4 lead.

Douglas, Gracie Duffy, Breithaupt and Anna Hutchinson got four straight hits to lead off the bottom of the bottom of the second, with Douglas’ towering solo home run, which bounced off the roof of a covering on an adjacent field, setting the tone for the inning.

“I knew she was going to come with a change-up first because she changed her game plan, but as soon as I knew that she threw that change-up, I knew I was looking for my pitch and I just swung,” Douglas said. “We were down a run, and I knew our team needed a hit. As leadoff, it’s my job. I try to hit the ball or put it in play. When I felt it come off the bat, I knew it was gone.”

Hutchinson’s single to left tied the game at 6-6 before Barfield’s sacrifice fly to centerfield put the Lady Rockets up 7-6.

Florien reclaimed the lead on Dees’ two-out, two-run home run in the fourth.

Breithaupt, who was 3-for-4 with three runs and two RBIs, had a leadoff single in the bottom of the inning and scored on Duffy’s two-out single to tie the game at 8-8.

Holden grabbed the lead with a three-run fifth inning, highlighted by Duffy’s double, which drove in two runs. Breithaupt had a grounder to shortstop to make the score 11-8.

“Before me, Taylor was up and they walked her intentionally …, but I told her whenever she got a pinch-runner in for her … ‘I’ve got your back’, and that I was going to score these runs, and that’s what I did,” said Duffy, who went 3-for-4 with three runs. “I had to do it. It was just my job, and I had to get my job done at the time.”

Chreene’s single, a bases-loaded walk and Downs’ grounder to short in the top of the sixth tied the game at 11-11.

Douglas gave up 11 hits, 11 runs, three walks and struck out two in a complete game win.

“Coach Linzey told us before the game the zone’s going to be tight, so I need to find it early in the game, and I came in and did that,” Douglas said. “I’m glad that my defense came and backed me up. I went into the game knowing that this was a good hitting team … and I knew this was going to be a fight until the seventh inning.”

Sarah McDaniel gave up 16 hits, 12 runs, two walks and struck out one in six innings to take the loss.

Duffy is confident the Lady Rockets can carry momentum into Saturday’s championship game.

“We’re really excited,” Duffy said. “We know we can’t lose now. There’s no reason to lose, and we can’t lose. We’ve worked to hard for it.”