Former and current Walker Renegades players pose with some of the organization's coaches at the conclusion of Saturday's camp. 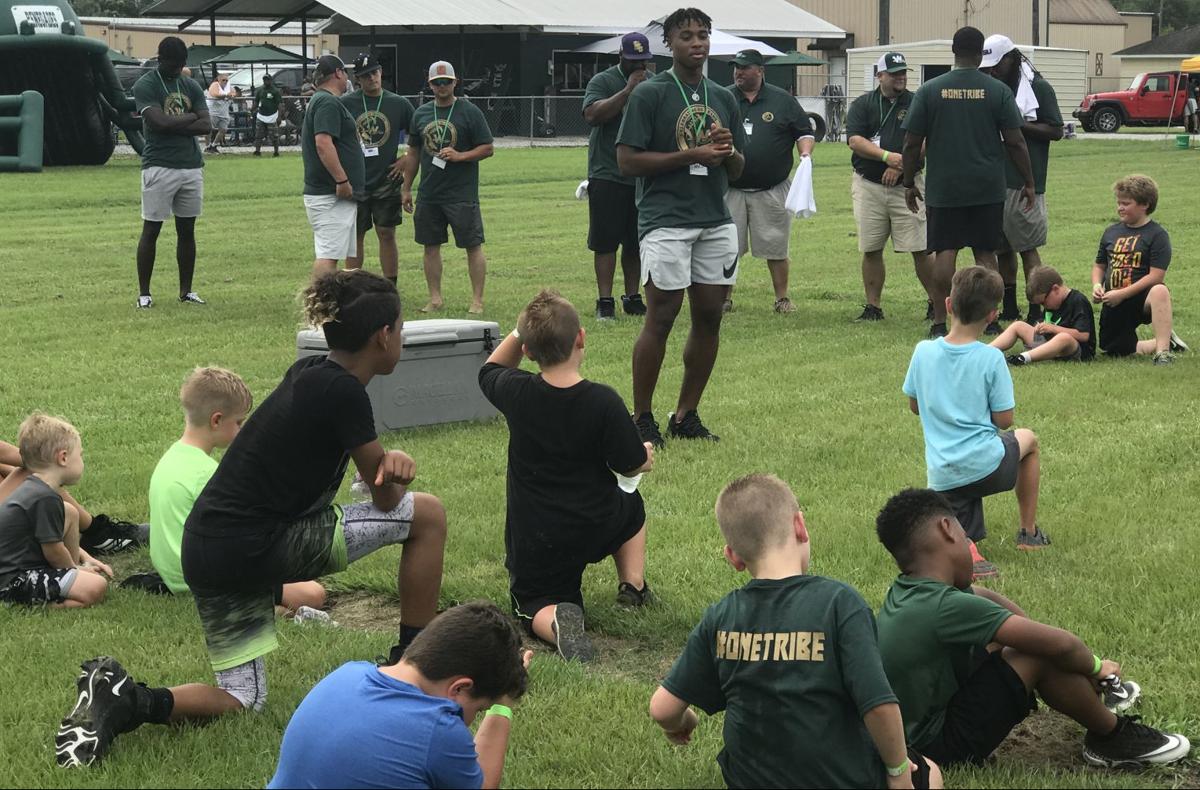 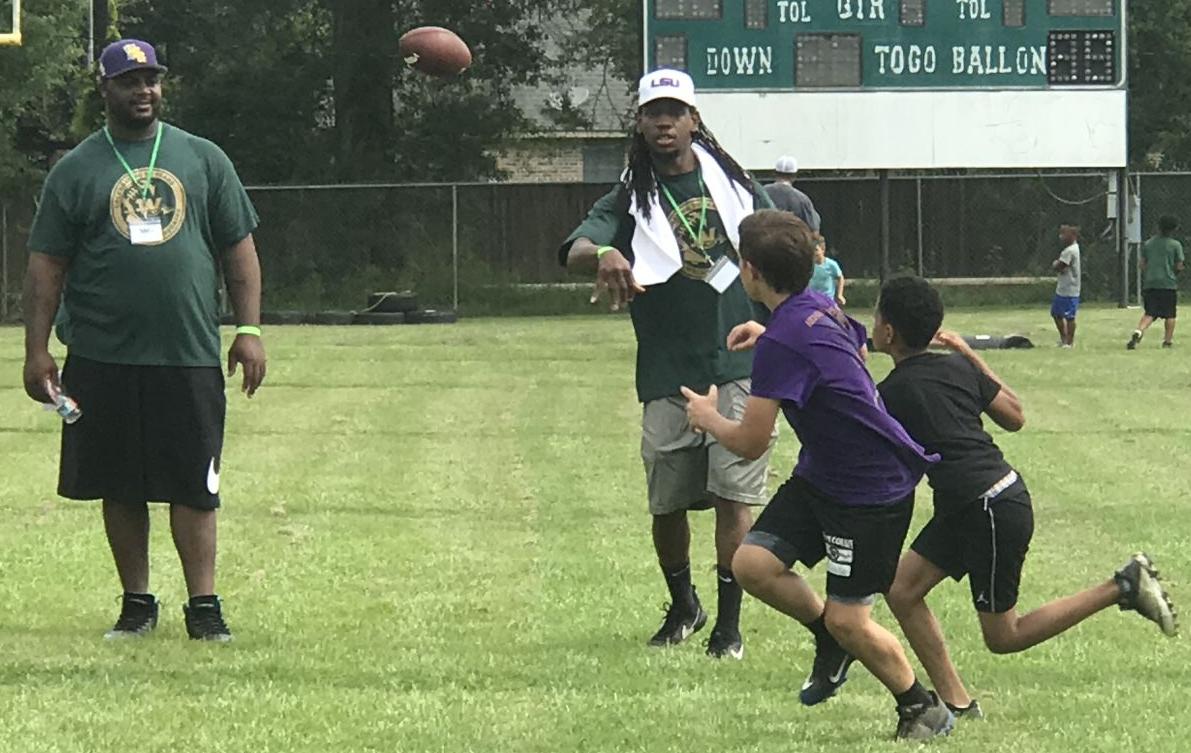 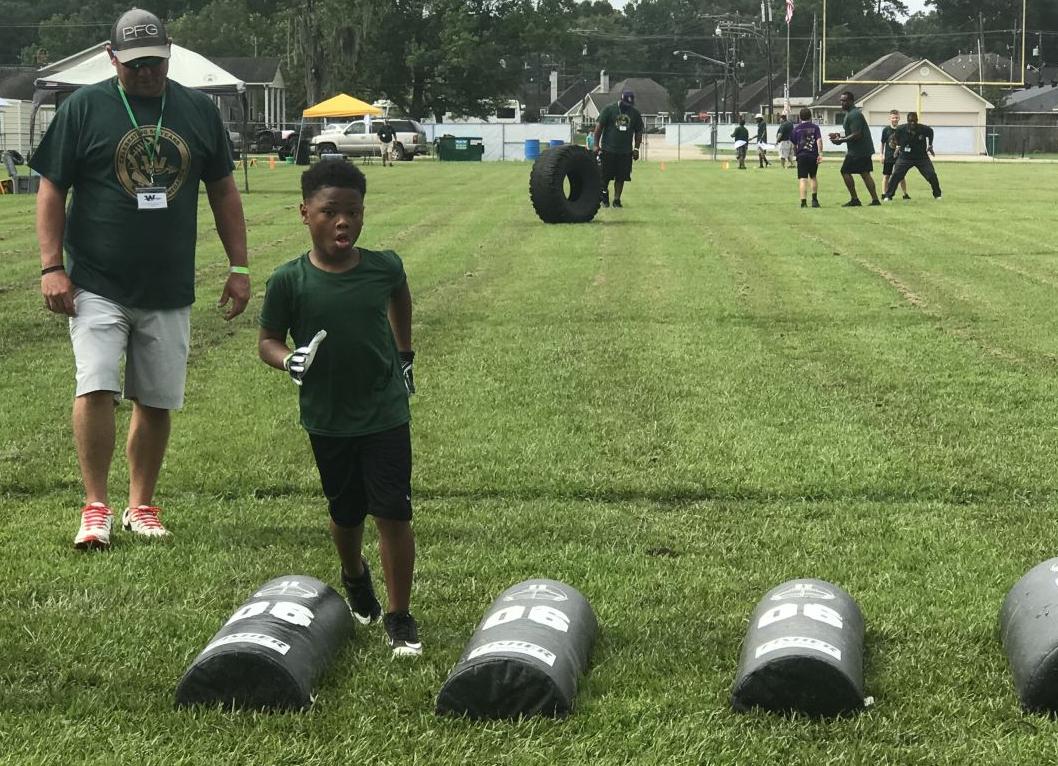 WALKER – There was plenty of football at the Walker Renegades’ camp Saturday, but there was also a bridging of the gap of sorts, bringing the program’s not-so distant past in line with its present and future.

“It’s great to come back and see the place we were at,” former Walker High athlete Jalen Cook said. “We were here at one point. Just seeing everybody still doing it, still back at it where we left off at and just keeping the tradition going is just a blessing really. These kids are probably going through the same things we went through, and for them to see us and all the great coaches here … I know in this program, everybody cares about each other over here, and this is going to be a pivotal part of their lives growing up because they’re going to be around each other. It feels great to see them having fun and bonding with each other like we did when we were little.”

Cook was one of several former Renegades players to give campers words of encouragement as the day wrapped up at the Renegades’ field. Cook, who will be playing basketball at LSU, attended the camp with former Renegades teammates Paul Howard and Brian Thomas, who also addressed campers at the end of the day.

Howard signed with Nunez Community College to play baseball, but he hasn’t forgotten his football-playing days, noting his time as a nose guard for the Renegades.

“I’d just shoot the gap every time, just get in the backfield,” Howard said with a laugh. “Watch the film. It was crazy.”

The Walker Renegades will be celebrating 50 years as an organization this year, and Howard couldn’t help but feel a bit nostalgic, even though it hasn’t been that long since he last suited up to play.

“Time moves fast,” Howard said while scanning the field as a younger generation of Renegades went through drills. “It’s pretty neat watching this all come together. All these bleachers and all this stuff, our dads put that up … It’s just crazy that stuff’s still here and there’s still kids working out here. It’s a cool thing.”

Thomas, one of the nation’s top receiver recruits, said it was good to see some familiar faces from his past at the camp.

“It’s great to see,” Thomas said. “They’re changing little things, but it’s still basically all the same, got a lot of the same coaches, but it’s just trying to improve it each and every year.”

He also said the bonds he formed with the Renegades helped as he moved into high school because players stayed together as they advanced through school.

Former Walker football players Lionel Turner and Chris Hawkins, both of whom won national championships at LSU, and former Walker athlete Cody Reine, who started college baseball career at LSU and eventually went to the College World Series with Oklahoma, were some of the other former Renegades to work the camp.

Turner, a former Walker High standout who played on LSU’s 2003 national championship team under Nick Saban, realizes some of the campers he talked to Saturday don’t know who he is, with one even asking if he played with Joe Namath.

“Their parents were young when I was playing, so I know they don’t (know who I am), but just to be able to pass the word to them, to come out here and teach them a few things, that makes me proud right there,” Turner said.

“It gives them a little motivation that you can go from the Renegades and move on to junior high to high school and move on to college,” Turner continued. “It doesn’t just stop here, so you’ve got to give them a little motivation because some kids figure they’re just playing just to play to have something to do to pass time, but you can actually have a future with this if you put all the work and dedication into it.”

Turner said he’s also proud of the longevity the Renegades program has had.

Hawkins, who was part of LSU’s national championship team in 2007 under Les Miles, said it was a bit different talking to a group of campers who probably aren’t aware of his athletic accomplishments.

He also said he had some personal reasons for working the camp.

“Later in life you kind of feel like you’re kind of just going through the motions sometimes … and stuff like this gets you back excited,” Hawkins said. “I’ve been out for the game for a while, and I haven’t played ball in a while. For someone to ask me to come back and give back to my city, it made me feel like a kid again.

“It makes me feel good in front of my kids to have my kids out here,” Hawkins continued. “They don’t know either. They didn’t get to watch me play coming up. They’re kind of like, ‘aw, daddy. You’re always talking about your stories and all this stuff’ … so it makes me feel good and honored just to let them see so they know what they’re working toward as well.”

Hawkins is also aware that he might have been working with some of the Renegades’ next generation of breakout athletes on Saturday, but only time will tell.